Here are the locations for the Soul Amethyst, Soul Sapphire, and Soul Ruby. First, make your way back into town by following the path. Most routes are blocked off, so just follow the only available path into Haven. When you get close enough, Ryan will ambush you dressed like a wolf. It’s time for a good old-fashioned JRPG battle. Take a look at your character sheet if you don’t know what your abilities and spells do. Ryan will drop a few items when defeated, including a strange key. After beating Ryan, go left down the street in the direction of the Gullweather’s Tavern. You’ll come across a Jester with a riddle along the way. You’ll find the answer elsewhere, so just head inside the bar for now. Duckie is inside dressed as a gnome. Head into the back room with the pool table and look at the Tattered Scroll on the wall near the bear. This will teach you the answer to the Jester’s riddle. The Soul Amethyst is actually located inside Gullweather’s Tavern. Go behind the counter and unlock the Music Box with the key you found earlier. Before you leave, explore the bar further and pick up the Gold Coin on the floor in the corner near the bathrooms.

With the Soul Amethyst in hand, leave the bar and go see the Jester. Tell him you’d like to solve his riddle. The correct answer for the heroes’ names is Nira, Desys, and Belin. He’ll leave you with another riddle: “To bribe that deadly troll of old, you have to pay four coins of gold.” Take the Gold Coin from his purse on the floor before you leave. You should have 3 Gold Coins at this point. Continue down the main street until Alex says something about the alley. Head down the alley on the right to find a Dead Guy and a Weeping Girl. They mention a River Monster up ahead. Continue straight down the alley to find Ryan, this time dressed a River Monster. Defeat him in battle and he’ll drop a mysterious blue stone and a Gold Coin.

Now, head back to the main street and visit the Blacksmith outside the records shop. He has forgotten how to make sunsilver. You can’t do much here for now, so just head inside the records shop, which has been renamed “The Magpie Emporium” for the LARP. Steph is inside selling a bunch of Magical Wares, and the Soul Sapphire is among them. Sadly, it costs a whopping 10,000 Gold, which you won’t ever be able to afford. For now, just buy the Troll Dust for 3 Gold. Before you leave The Magpie Emporium, look at the Smithing Scroll posted next to the front door. You’ll need it to help the Blacksmith. You can come back later and buy the Soul Sapphire.

Once you’re back outside, speak to the Blacksmith and remind him about the components of sunsilver. He’ll reward you with a Scroll of Advantage and tell you about a troll around the bridge. Now, continue further down the main street until you reach the bridge. When you arrive at the bridge, you’ll be ambushed by Ryan yet again. This time, he’s dressed as a troll and he has the Soul Ruby on his belt. Use the Troll Dust you bought back at The Magpie Emporium and he’ll willingly give up the Soul Ruby. You’ll also get a Gold Coin for finishing the encounter.

After dealing with the troll at the bridge, return to The Magpie Emporium. It’s time to haggle for the Soul Sapphire. Browse the Magical Wares and select Haggle when hoving over the jewel.

Ask Steph to lower the price to one gold and she’ll accept if you bring her a scale from a dangerous creature from the River of Sorrow. That creature is actually Ryan, and you’ve already beaten him at this point. Ethan will hand over the strange blue scale you obtained from the battle earlier, and you’ll receive the Soul Sapphire in return. If you chose Steph as the hottest distraction earlier in Chapter 3 and saw her nervous aura before talking to her in the Magpie Emporium, then you will unlock a special new dialogue option. This method allows you to offer Alex’s hand in marriage in exchange for the Soul Sapphire. Both methods are valid.

With all three gems in hand, head back to King Jed at His Majesty’s Summer Castle. On the way there, you’ll encounter Charlotte, who is playing Notheria the forest spirit. After a brief moment of happiness, it’s time for the final boss fight. You’ll fight the villain you chose when planning things with Steph earlier in the game. 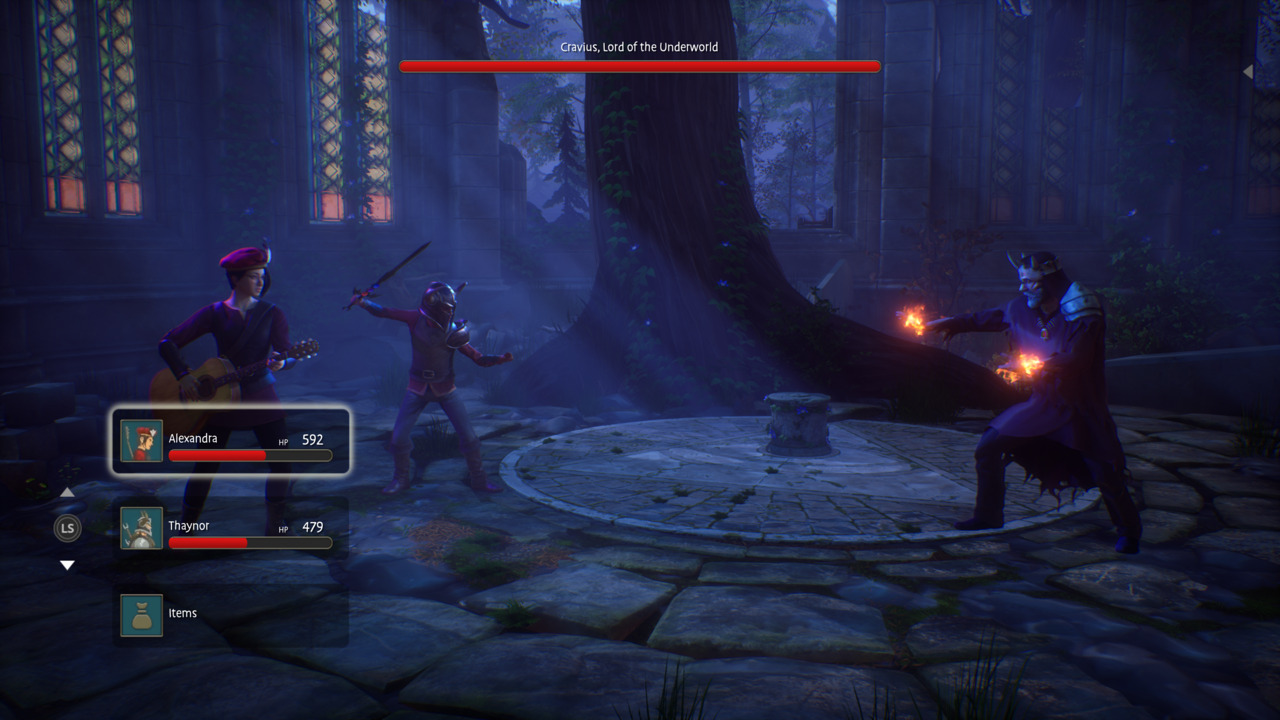 The final battle of the LARP isn’t particularly tough, especially if you’ve been collecting scrolls and other abilities throughout the adventure. It’s the same as the other fights, only with a new UI and flashier effects. Make sure you use Alex’s Healing Serenade to keep your party healed and use any items you have in your inventory. After the boss battle, the LARP will be over.

Life is Strange: True Colors is available now on PC, PS4, PS5, Xbox One, and Xbox Series X|S. A Nintendo Switch version of the game is coming at a later date. Check out our review of the game here.