Both a sword and an axe, combine them together to unleash a hellish attack. The Charge Blade in Monster Hunter Rise is by far the most complicated weapon to use, but undeniably one of the strongest as well. Like the Switch Axe, it has two forms in one. You have its default mode which is the Sword and Shield, and the stronger Axe mode. I say stronger, but let it be noted that the sword part is equally strong, with only difference that it doesn’t have the huge attacks the axe has, that result to more damage output overall. That said, both modes are very fun to to play, but, require some research beforehand. We will take a look at everything mentioned, in this guide.

The difficulty of using the Charge Blade in Monster Hunter Rise, doesn’t only come from the plethora of mechanics that you need to be aware of. Even if you do end up practicing a lot, mastering the weapon’s features, its main attacks are still tough to land, as they require timing, correct placement and precision. Specifically the weapon’s strongest attack, Super Element Discharge, does need all of the above mentioned in combination with a long animation. If it hits though, it deals massive damage, worth the trouble of setting up for it.

As we mentioned above, Charge Blade is two weapons in one. Sword form is strong by itself, make no mistake about it, but your goal is to set up the buffs needed in order to use the axe form, to unleash its big bursts. As you attack with the sword, you fill Phials. These Phials need to be ‘loaded’ into the weapon, in order to be used by the axe part. Phials enhance certain attacks and your weapon overall, or used for performing the Element Discharge move. The Shield is also included in those weapons, which can of course be elementally boosted too.

If your weapon is boosted and have enough Phials, then your Super Element Discharge will hit like a track, with a brand new animation, ending to a big boom. While this was kind of nerfed in Monster Hunter Rise, having a narrower explosion which results to less hits overall, it still is a hellish move, and should be your finisher whenever you are able to use it.

To sum it up, what you need to do with the Charge Blade in the field, is the following. Attack with your sword, and fill the gauge bar to red. Then, use that gathered gauge to load your Phials to full amount. Right after, what you can do is either start elementally boosting your shield and sword, or simply end a combo with your Element Discharge, dealing huge numbers of damage in the process. Remember that by having your shield boosted, your Element Charge becomes Super Element Charge, with a longer attack animation, but way more power.

Phials are all expended after that, so repeat the process and fill them again. After getting used of the controls of the weapon, then this should be already imprinted in your brain, literally following this pattern without even thinking. Don’t forget to use your shield by the way, whenever you need to block an enemy’s attack. While not as strong as the Lance’s shield, Charge Blade can mitigate quite some damage. Also, if you fill your gauge too high, you will enter an overheat state where your attacks are going to be constantly deflected. Simply fill your Phials with ZR+A, and start attacking again. 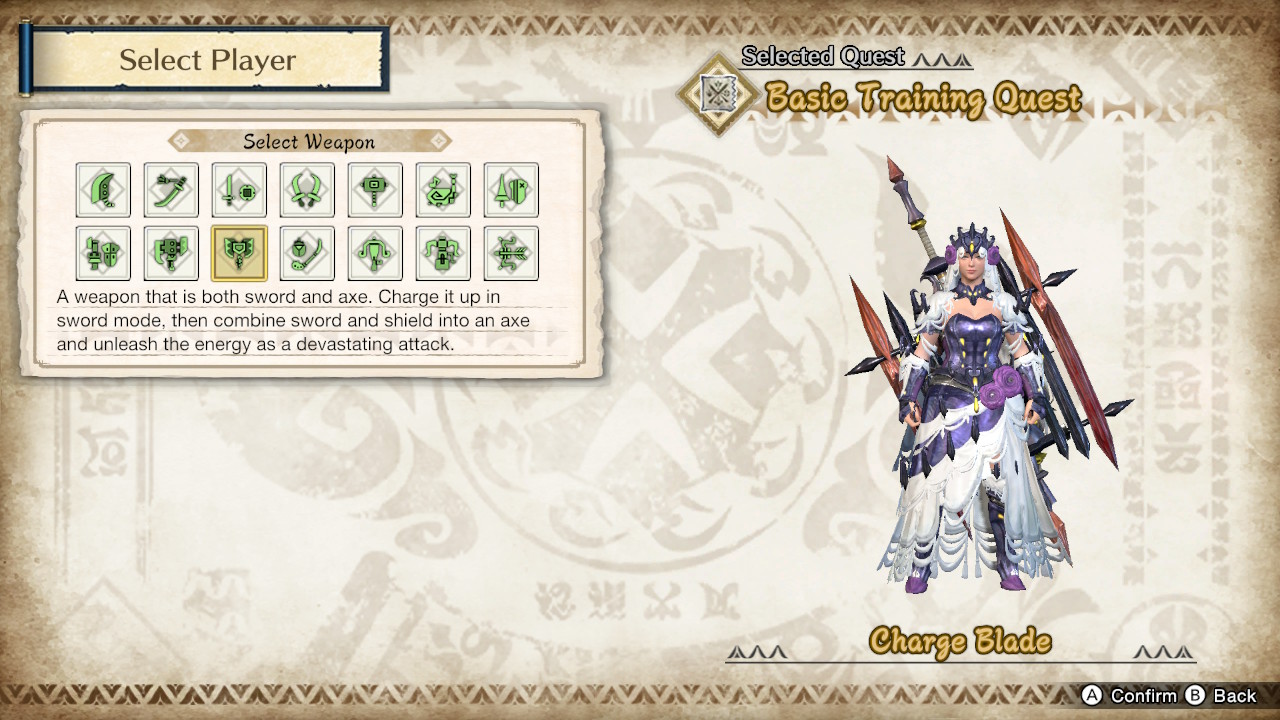