The Heavy Bowgun, like in previous entries of the series, is a powerful weapon in Monster Hunter Rise. In contrast to its little cousin, the Light Bowgun, it’s heavier, clunkier, slower, but way more powerful. They pretty much act the same way, but the Heavy Bowgun relies on less, heavy hitting shots than a plethora of smaller ones. Additionally, it can charge some of its shots for extra damage, making it true to its name. The infamous Cluster Bomb is also part of its kit, so let’s take a look at everything mentioned, below in this guide.

The Heavy Bowgun does one thing in Monster Hunter Rise, and it does it well. It’s a tool of destruction, shining mostly when used in multiplayer, due to the nature of a ranged weapon. It’s easier to land precise shots when the monster’s attention is elsewhere, but make no mistake, this gun can make it equally efficiently even in solo hunts.

Powerful shots and its Special Ammo are its selling point, both hitting very hard when aimed at the correct spot. As the Light Bowgun, it has various Ammo types that help depending on the occasion, and when its signature ability is refilled, you can use its Special Ammo to unleash hell to a creature.

It has two kinds of Special Ammo, with one being the Wyvernsnipe and the other Wyvernheart. Wyvernsnipe is self-explanatory, as it’s a single shot, aimed from very far away, packing a real punch. Wyvernheart turns the Heavy Bowgun into a literal machine gun, firing away hundreds of shots in very few seconds. Both are equally strong on their own, but I personally prefer the Wyvernheart, as it’s easier to use. The snipe needs to be shot at a very precise manner, in order to hit the monsters weak spot in one go. If you miss the very few shots you have, the ability is simply wasted.

Besides its regular shots, the Heavy Bowgun has some other tricks up to its sleeve. You can equip certain mods to it, enabling some interesting features. One in particular is the Shield Mod, which literally attaches a Shield to the weapon. Considering it is a ranged weapon, this fact is particularly odd, but helpful indeed. The Heavy Bowgun is as the name suggests, heavy. This means it’s slow, and you can barely move with it. Having a shield to protect from some hits you don’t have time to evade, can save you in many tight spots. It is of course not nearly as powerful as Lance’s for example, but it still is a shield.

While the Heavy Bowgun acts similarly to its Light version, it’s harder to handle due to the significantly less mobility it has. Its attacks hurt way more though, able to flinch and knockback monsters in some occasions, compensating for its big drawback. If you want to try out these ranged weapons that Monster Hunter Rise offers, my personal suggestion would be to first start with the Light Bowgun, and see if you like its playstyle. If you do, practice a little with it and then jump into this juggernaut. At the end of the day they play completely differently, making them unique enough to be a different weapon type, but the core gameplay remains the same. If you are into ‘pew-pew’ stuff, then any of the two versions are for you.

Similarly to the Light Bowgun, the Heavy Bowgun doesn’t have any particular combos. You need to manage your Ammo correctly, use Special Ammo when it’s refilled, and keep shooting monsters. 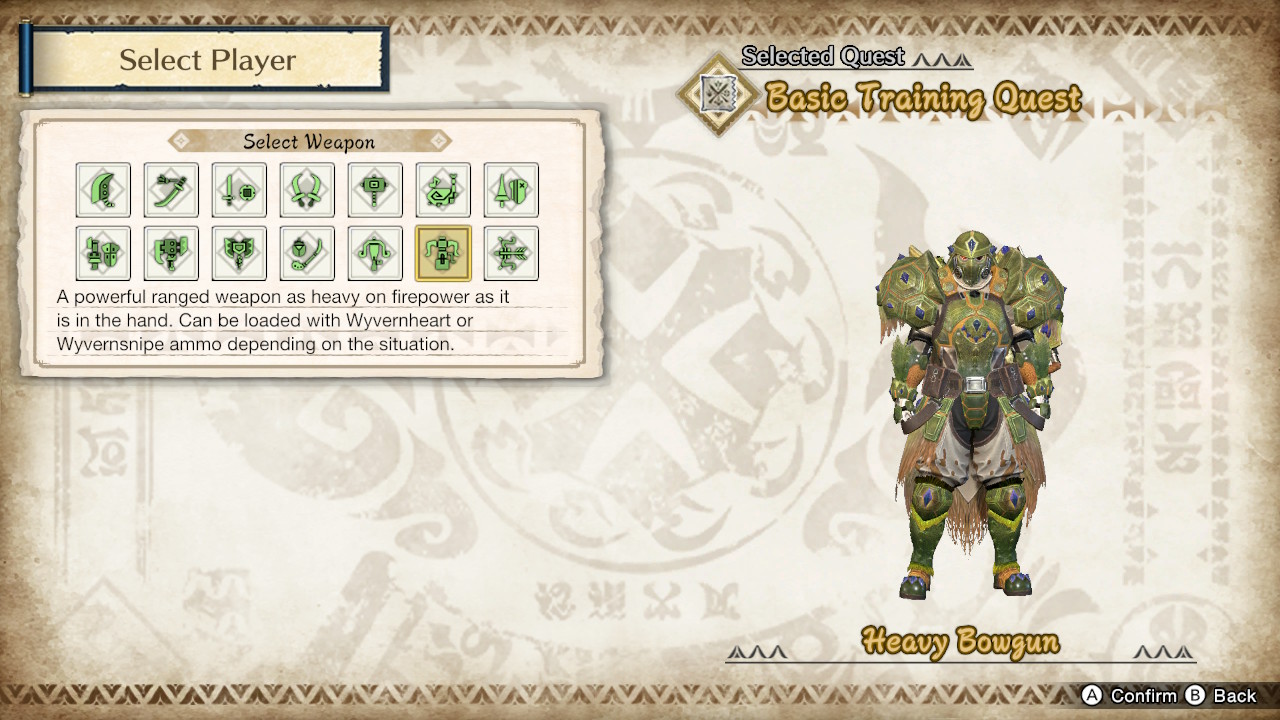