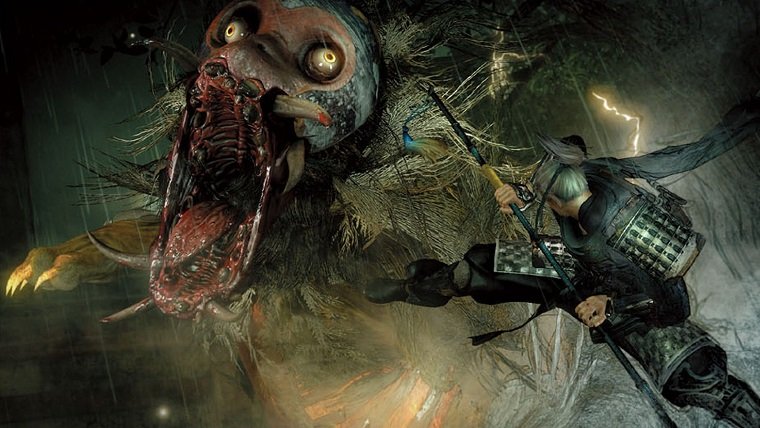 Following the strange Hino-Enma boss fight we’re back to giant beasts with the Nue boss fight, which looks like some kind of a giant electric dog. He is once again another very hard battle that will require you to do a lot of dodging and taking advantage of attack windows as best as you can, being a threat from close range and from far away. This guide will show you what the boss is capable of and the best ways to send him packing.

First of all, you don’t want to start this fight on the offensive, as it will spell quick trouble for you. You want to walk into the courtyard far enough to trigger the battle, as he’ll summon lightning around himself that will do some considerable damage. There are several attacks that Nue has at his disposal, many of which include lightning. One has him spewing lightning out of his mouth from left to right, while another has him summoning lightning strikes that follow you around the battlefield. When he’s doing the lightning breath move you’ll want to move away from the boss to get out of range of it, and with the lightning strike move you want to keep running to avoid the 4 lightning strikes from catching up to you.

He will also do a move that has him rolling towards you quickly that you can dodge out of the way easily enough, and although he seems vulnerable do not go in for the attack. Blasts of lightning will quickly follow his path, and if you try to attack him then you’ll find yourself getting struck. He has another similar move that his him lunging at you, but if you dodge it he will stumble and fall. This is the point where you want to go in for the attack, as he will stay down for a few seconds and allow you to get in several hits to deal big damage.

As the battle continues he will occasionally use an attack that has him spraying poison at you, which will obviously be trouble if it gets you. However, this move has a relatively short range and is easy to dodge, so if you’re able to get out of the way of it then you’ll have the opportunity to get some hits in while he finishes spraying.

These are all the major attacks that Nue will use against you, which can be very tricky to learn the patterns and timing of at first. The times when he is spewing lighting breath or spraying poison at you are the times when you can safely get behind him for some quick hits, and when he misses his lunge attack is probably your best opportunity to really hurt him. Other times will have him summoning lightning strikes around him that will punish you for trying to get a hit in, so be very careful with your attacks. Just keep your distance and capitalize on the aforementioned attack windows and you’ll bring him down before you know it.