Nioh Guide: How To Respec Your Character With The Book Of Reincarnation 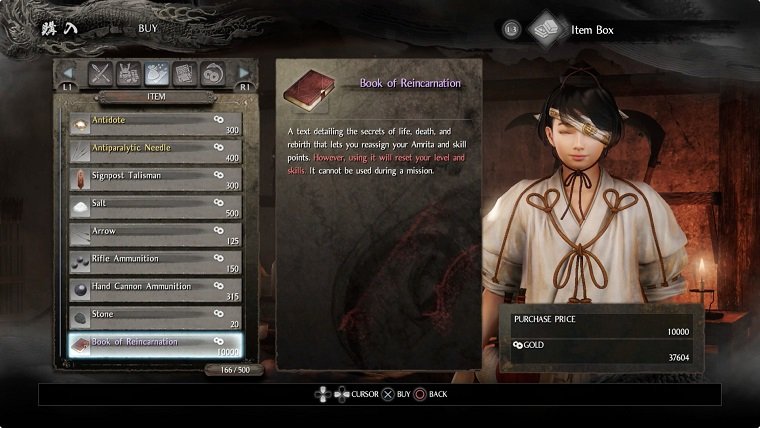 Leveling up will be a process that you’ll engage in regularly throughout your journey through Nioh, as you’ll want to make sure your character is as powerful as he can be in order to deal with the increasingly-difficult enemies. However, you might find after awhile that you aren’t happy with the skills you’ve been putting your Amrita or skill points towards, and wish you would have taken a different path. Fear not, as there is a way to reset everything back to zero, and this guide will show you how.

It’s worth noting that you won’t be able to do this at the very start of the game, as the ability to do so is unlocked after you’ve completed the first two story missions. Once you’ve done that, then the ability to access the Blacksmith is unlocked, who holds the key that will let you respec your character. You can get to the Blacksmith by opening the world map and choosing the Starting Point, which is marked with a big building on the map. The Blacksmith option will be there, and once you’ve selected it you’ll want to select the buy option. You need to buy the Book of Reincarnation in the item tab, which costs 10,000 gold. The price of this goes up each time, so use it wisely.

Now that you have the Book of Reincarnation, go to the storehouse that is located on the menu of the aforementioned Starting Point. Find the item in the list and use it to get back all of the Amrita, Samurai, Ninja and Onmyo skill points that you have spent up to that point. Now all that’s left to do is reassign them how you want to, and hopefully this time you’ll be happier with how your character turns out. Keep in mind that this can’t be performed mid-mission, as the game requires you to be on the world map to do this.

It’s worth noting that there is another way to acquire the Book of Reincarnation, but this method isn’t unlocked until later in the game. Once you’ve unlocked the Hidden Teahouse that will be located on the Starting Point menu along with the blacksmith, there will be a vendor there that also sells this book. However, rather than charging gold he charges glory, which you earn from defeating the game’s Revenants. The book will initially cost 800 glory, but will increase in price with each purchase just as it does with the Blacksmith.

Resetting all of your characters skills and stats isn’t something you’ll want to do often, so be sure you have a solid idea of the character build you want before using the Book of Reincarnation.

Home / Game Guides / Nioh Guide: How To Respec Your Character With The Book Of Reincarnation