No Man’s Sky Colossal Archives: How to Find Planetary Archives No Man’s Sky Origins has made sweeping changes to planet generation, and one of the newest additions to the game are the Colossal Archives – giant planetary archives and hubs where explorers can trade in their artifacts for some solid coin. These massive buildings can be found randomly while exploring, but there’s a simpler, faster way to find one.

Aside from hoofing it across the galaxy the hard way, players can dial in on the location of a Colossal Archive (also known as a “planetary archive” in No Man’s Sky) with the use of a commercial planetary chart from the cartographer. This individual can be found within space stations next to the portal, and they will trade you a chart for some navigational data. They’ll also sell you a random chart for 15 nanites, but we’re looking to reduce RNG’s influence here, not expand it.

Navigation data can be found a handful of ways. Vendors and Galactic Trade Hubs in No Man’s Sky sometimes have it for sell, and glowing orbs and cubes on tables often grant navigation data when interacted with (or nanites if your luck isn’t great). A more consistent way to grab navigational data is to interact with save waypoints on planets. You will always get navigational data for doing so, and they’re easy enough to find. Just plop down your signal booster, and scan for nearby buildings. It won’t always give you a location with a save waypoint, but you’ll soon have enough navigational data to buy a large stack of planetary charts. 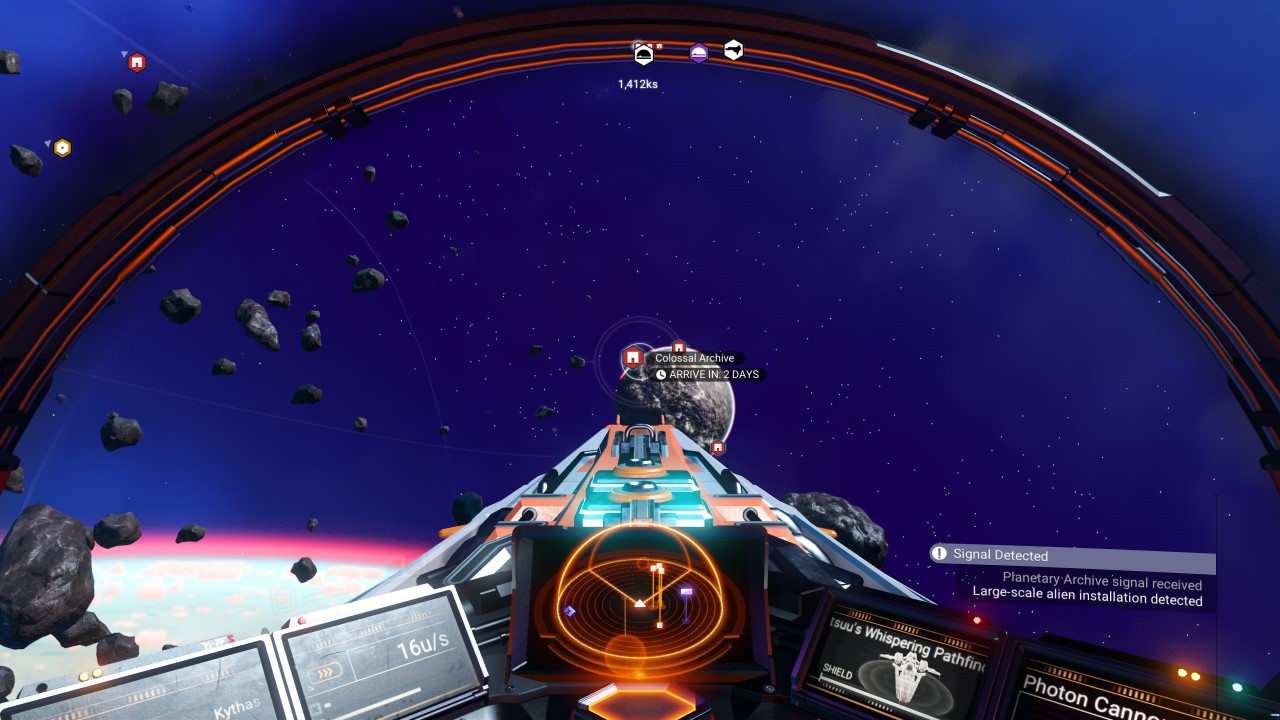 Be sure to buy the commercial planetary charts. These locate inhabited settlements in No Man’s Sky, which is what the Colossal Archive is. Once you have 10-20 of these maps head back into space and start popping them. Do not use them one at a time, exploring each settlement before moving on to the next chart. I tried this: I didn’t find a single Colossal Archive/planetary archive after doing so for 12 hours. Trust me; spam these maps in space and you’ll find an archive in 2-minutes.

No Man’s Sky likes to take its time announcing each discovery, but keep at it. Once the prompts disappear pop another chart until “Planetary Archive” appears. That’s the waypoint you want to follow, and it’ll even say “Colossal Archive” when you highlight it. Point your nose in that direction, punch your pulse drive into full-speed, and lo and behold you’ll arrive at one of these new Colossal Archives in No Man’s Sky. See, much faster than using each chart one at a time. Duplicate this process whenever you want to find more.