This is the first major hurdle for the Phantom Thieves. The Heavenly Punisher is a boss you’ll encounter early in Persona 5 Strikers, and it’s the first major challenge you’ll face in the Shibuya Jail. While it’s not the first boss of the area, it’s the toughest foe you’ll face at this point in the game. It has several hard-hitting attacks that you’ll have to learn to dodge if you want to survive. You need to defeat him in order to progress further through the Jail, but he’s not too hard to take down once you know what to do. Here’s how to defeat the Heavenly Punisher in Persona 5 Strikers.

How to Beat Heavenly Punisher in Persona 5 Strikers

The battle with the Heavenly Punisher is tough, but it isn’t unwinnable. Focusing on elemental weaknesses and crowd control are the keys to coming out on top. Here are the basic things you need to do to win:

The above tips are just a general overview of what needs to be done to win the fight. Keep reading below for more advice and strategies.

You can bring your favorite Phantom Thieves into the fight if you want, but you’ll have a much easier time if you bring the right teammates. 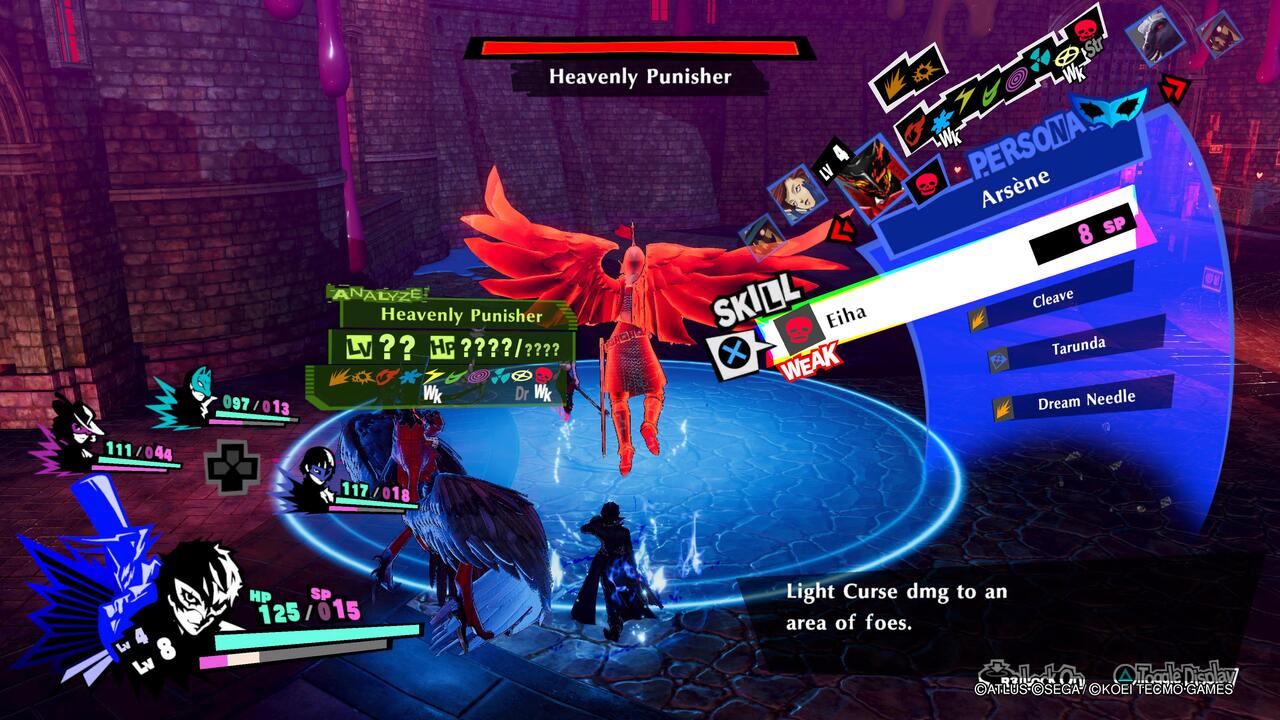 Heavenly Punisher is just another name for the Archangel persona, so it’s weak to electric and curse skills. Ryuji is your best bet for electric skills, and Joker is the only party member with curse skills. Just make sure haven’t gotten rid of Arsene yet, otherwise you’ll need to make a trip to the Velvet Room to get him back so you can use Eiha.

Exit the Jail to Regain SP

You can’t hit elemental weaknesses with your personas if you don’t have enough SP. At this stage in the game, you probably don’t have too many SP recovery items. Leaving the Jail and heading back to the real world fully recovers HP and SP for all party members, however, so take a break from the cognitive world and head back to Leblanc to get your stamina back. To leave the Jail, just head to any Checkpoint you’ve been to. There’s a Checkpoint just before the boss battle area. It’s marked on your map with a green C icon, so it’s pretty hard to miss. Just exit the Jail and come right back inside to recover all your HP and SP. Then, just conserve SP while you fight your way back to the boss arena.

The Heavenly Punisher has five main attacks that you’ll need to watch out for. Three of them are persona attacks, while two are just standard physical attacks. Each of them is listed below. 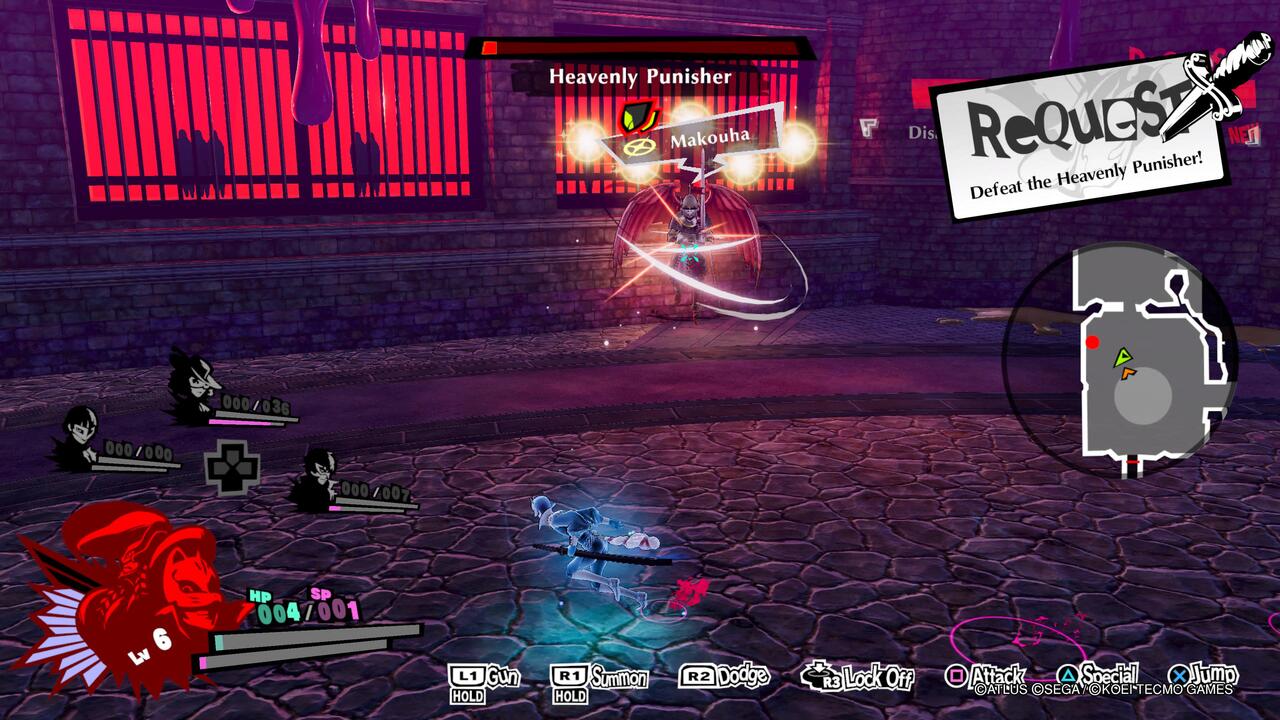 You’ll be able to tell when Makouha, Mapsi, and Vajra Blast are about to happen because their names will appear on the screen above Heavenly Punisher. His Sword Swings and Dive attacks won’t have any obvious tells, so you’ll just have to watch for them and be ready to dodge.

If you’re making use of your elemental attacks, then you’re going to run low on SP during this fight. Thankfully, Yusuke has a fantastic ability that doesn’t require any SP at all. By pressing the Triangle button (on PS4 at least), Yusuke will prepare to counter an incoming physical attack. 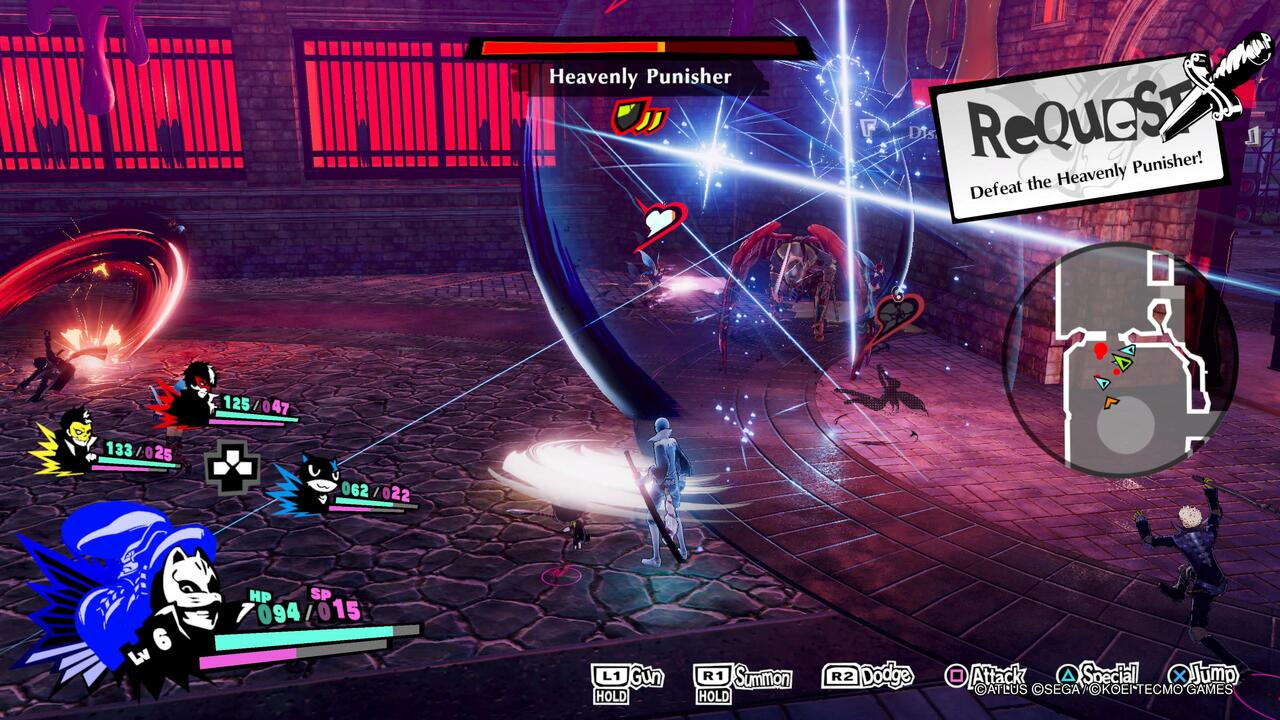 Just press Triangle when the Heavenly Punisher is about to swing his sword or dive toward you. If you time it correctly, Yusuke will perform a powerful slash that will make a large dent in the enemy’s health bar. You can’t counter Makouha, Mapsi, or Vajra Blast though, so you should still avoid those so you don’t get hurt.

Baton Passes Give You Showtime Faster

During this fight, you should be switching between Joker, Ryuji, and Yusuke frequently. Not just to use their elemental abilities, but also because using a Baton Pass will make your Showtime gauge fill up faster. It won’t work if you spam the switch button, but if you swap characters at a decent pace, then you’ll have everyone’s Showtime attacks up in no time. Using a Showtime attack is an easy way to rack up damage, and they can really help out during this fight. 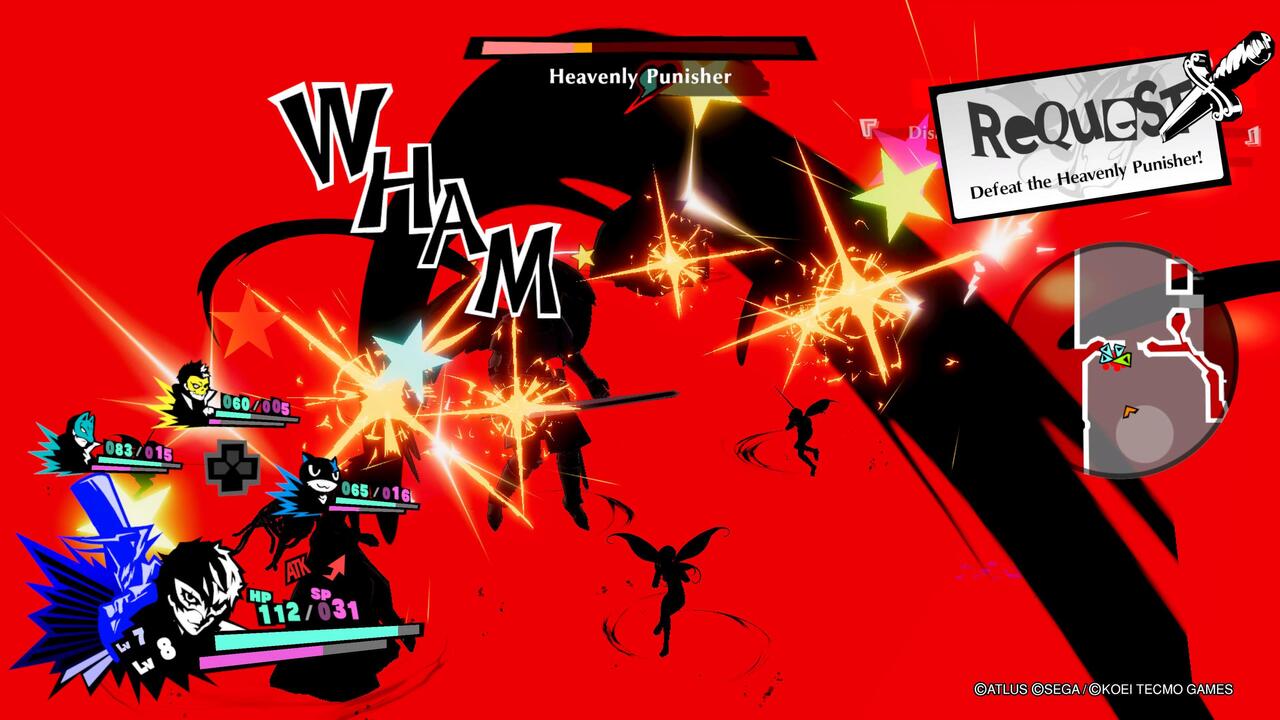 If you apply all of the above tips, then the Heavenly Punisher should go down in no time. Some of his attacks can be pretty tricky to dodge, but you can thankfully restart from the beginning of the battle without any penalties if you die. You can also switch party members and use items before attempting the fight again too, which helps a lot. Once the fight is over, you can continue through the Shibuya Jail.