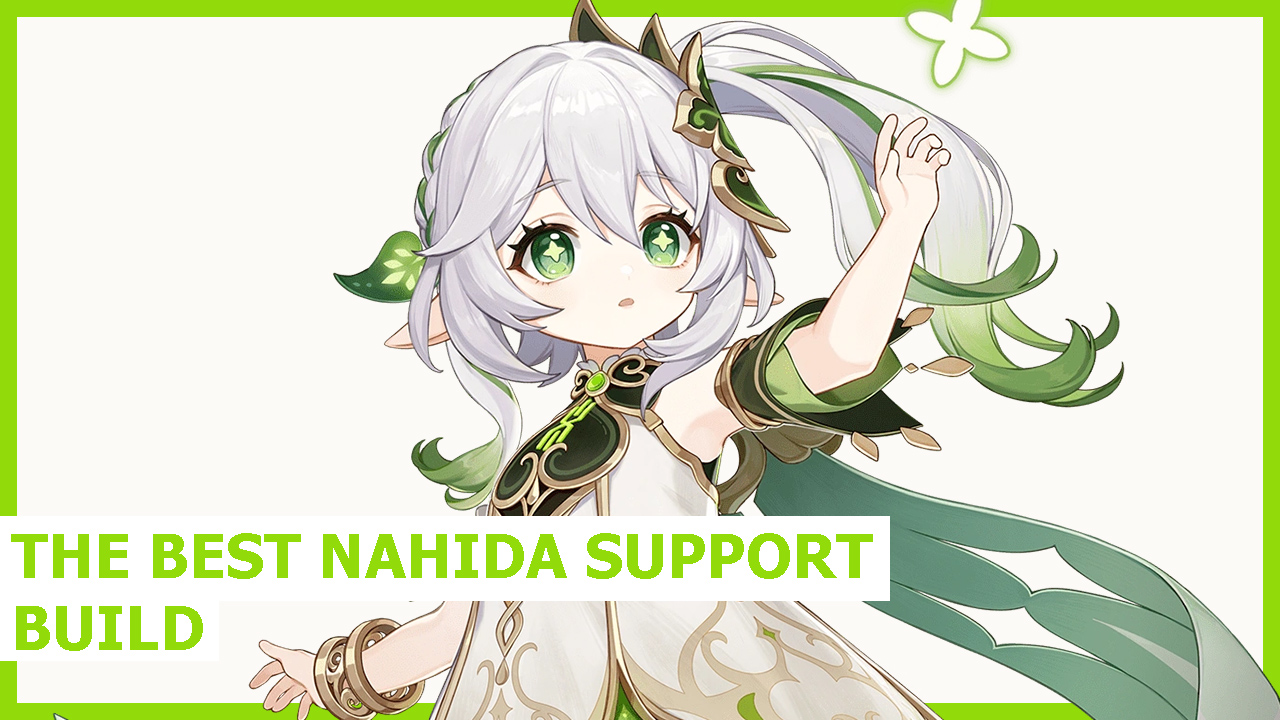 The first wave of banners part of Genshin Impact‘s version 3.2 is here, bringing to players the official playable debut of Nahida. But how should you build her? Now, in order to answer that and more, here’s a Nahida build sure to show all the true power of the Dendro Archon.

As both an on-field and off-the-field offensive support, Nahida’s biggest strength lies in her ability to constantly apply Dendro, massively increase her teammate’s Elemental Mastery value after performing her Elemental Burst, and empower her Elemental Skill based on her overall EM value. Our main choice for a support build will be the use of a 4-piece Gilded Dreams set.

The Gilded Dreams set is our main choice for Nahida as it massively boosts her EM value thanks to both its 2-piece and 4-piece effects, the latter of which will provide her with up to 150 extra EM after triggering an elemental reaction on a team featuring three non-Dendro characters.

For substats, we recommend prioritizing Elemental Mastery, Energy Recharge, and CRIT. The best-case scenario can be achieved by having a total of 50% CRIT Rate, 100% CRIT DMG, and at least 800 EM.

Using a set featuring a 2-piece Gilded Dreams and a 2-piece Wanderer’s Troupe can also work really well for those looking for a more permanent increase in Elemental Mastery. As each set’s 2-piece effect will increase your EM by 80.

Taking into account Nahida’s EM-focused set as well as our build, the best weapons for her feature Elemental Mastery substats. As usual, the best weapon for Nahida is her signature 5-star A Thousand Floating Dreams, which will provide a great amount of ATK (542 at level 90) and EM (265 at level 90). The Catalyst will also provide buffs based on the elements of your party (similar to the Gilded Dreams set), thus making it a perfect fit for Nahida.

The 5-star is then followed by the 4-star Catalysts Sacrificial Fragments and Wandering Evenstar in that order. Sacrificial Fragments is our main choice thanks to its ability to offer a massive amount of EM (221 at level 90) while increasing Nahida’s Elemental skill availability. For F2P players, we recommend the use of the craftable 4-star catalyst Mappa Mare.

For DMG-focused builds, using The Widsith can also work well, as it will allow you to fully focus on CRIT Rate and still reach the 50/100 threshold.

To recap, you can check out the best weapons for Nahida below: Taking into account Nahida’s set, we recommend that you focus on leveling up both her Elemental Skill, All Schemes to Know, and her Elemental Burst, Illusory Heart, in that order.

To recap, here’s in what order we recommend that you level up Nahida’s talents:

We recommend that you make use of teams featuring Nahida, a Battery, an Electro main/sub DPS, and an overall support/healer, given the reactions generated between Electro and Dendro. The best team for Nahida in our conception features Nahida as its main support, Cyno or Yae Miko as its Electro DPS, Jean as its main healer, and either the Raiden Shogun or Fischl as its Battery and secondary DPS. With Cyno, Nahida will become an off-the filed-support, while she will take on the on-field position with Yae Miko.

To recap, here are the best teams for Nahida in Genshin Impact: