The Outer Worlds: How to Get All Companions 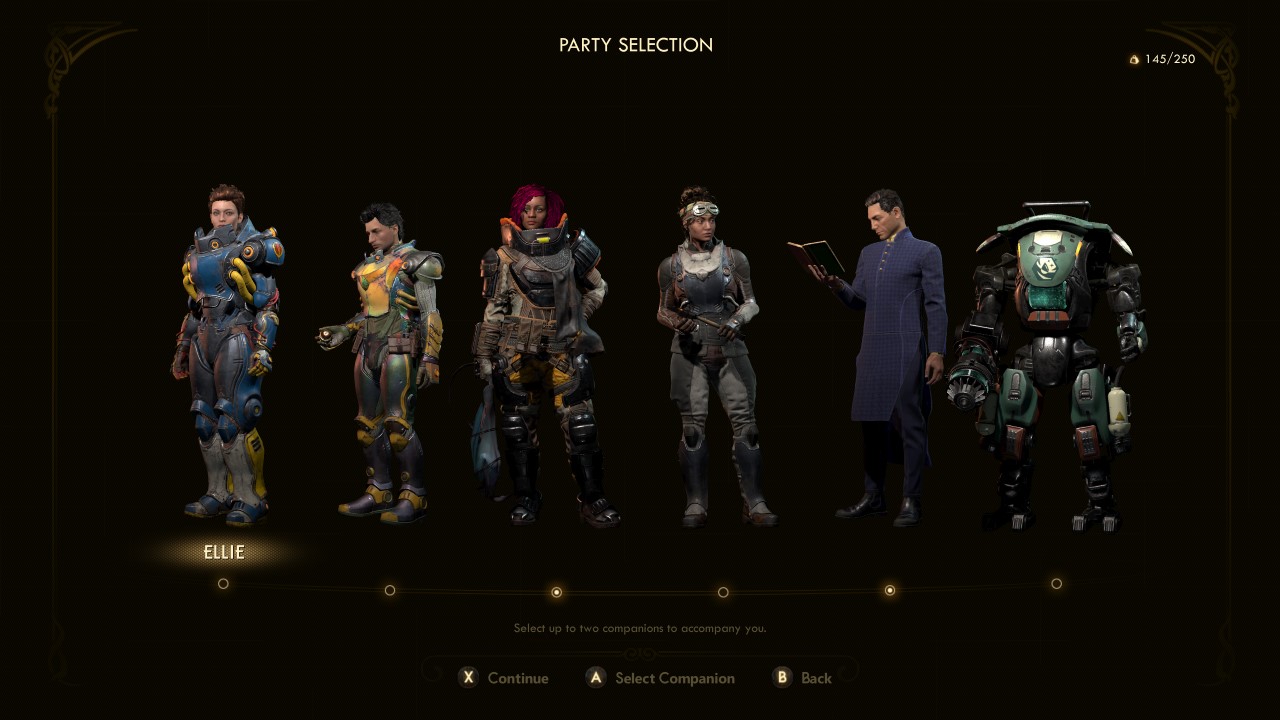 You’re not the lone wolf type: you prefer having someone watch your back as you go about saving the colony from itself, so you may be wondering how to get companions in The Outer Worlds. There are six total, and recruiting them is a straight forward affair. Below they will be listed in the order they can be recruited, with any quest they require detailed, and their perks below that. 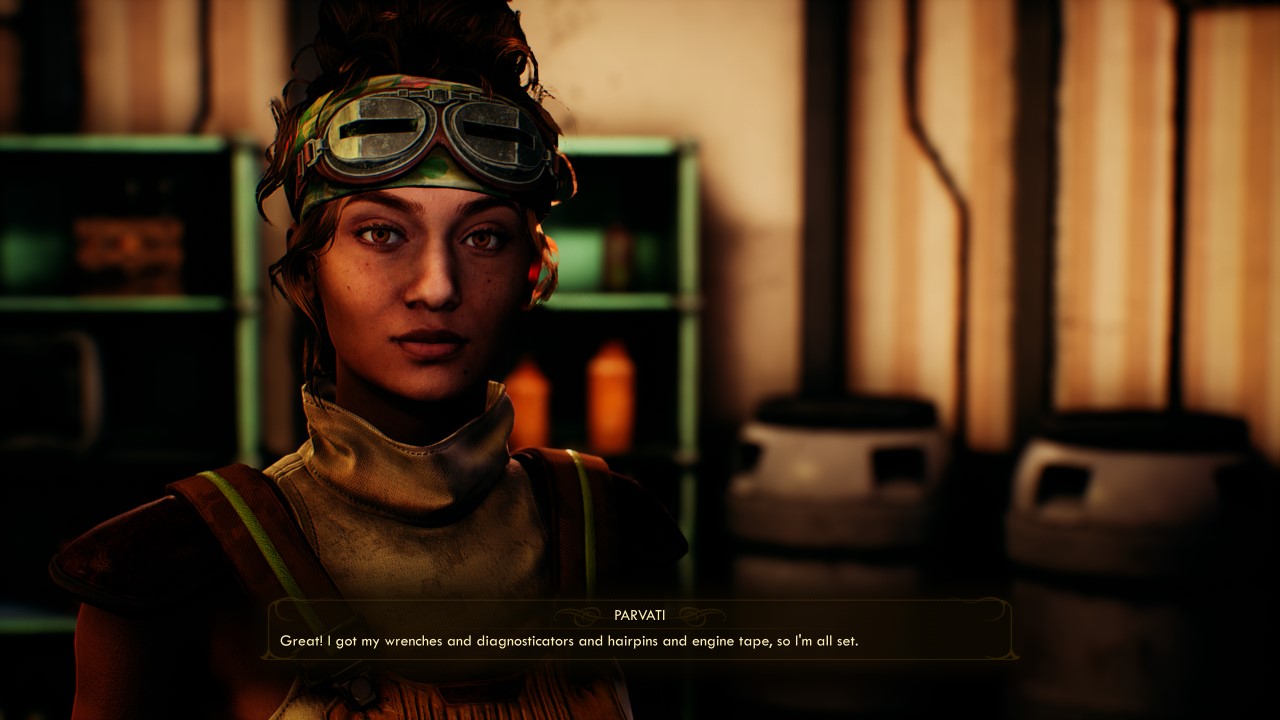 How to get companions: Parvati.

Parvati is the first companion you can recruit in the game, and there isn’t any fancy quest you need to complete to get her on your crew. When you talk to Reed Tobson for Stranger in a Strange Land for the first time Parvati is there with him, and Reed will suggest you take her along as support. Just say yes and Parvati will join your crew. At the end of Stranger in a Strange Land she will ask you if you wish to keep her on your crew; agree to her request and she’ll stick around until you dismiss her.

Parvati is an engineer, so her perks are: How to get companions: Vicar Max.

Immediately after Parvati has joins your team she will ask to speak to you. Do so, and she will suggest you visit the local Vicar, Max. Head to the church near the exit to the landing pad, and you’ll find the man sitting behind his desk to the left of the entrance. Talk with him, and after some “spiritual” guidance, Max will ask you to find a heretical text for him. Accept his offer to get the quest The Illustrated Manual.

With the quest in-hand, head outside Edgewater and go north towards the first settlement on the map, east of the community center. Dispatch the marauders there, and walk inside the building to find the Collector’s note. It’ll point you in the direction of a cave to the west; head that way and look for the volcano near the geothermal plant: the cave is just below it with a river running out of it. Head inside the cave and remove the mines. You’ll see a locked safe to the right, and it only requires a lowly 5 Hack to open. The mag-picks you’ll need are on a crate to the left of the safe. Retrieve the journal and return to Max. After some dialog he’ll ask to join your crew.

Max is a man of the cloth, and has learned a few skills working a tour in a prison, so his skills are: How to get companions: Felix.

Once you leave Edgewater you’ll head to the Groundbreaker, where Felix can be found immediately after leaving your ship arguing with some of the guards. You can talk to him here to skip some dialog later, but you can’t recruit him just yet. After you’ve talked to Udom and Gladys, Felix will be waiting outside the ramp to your ship, and if you talk with him he’ll ask to join your crew. If you ignore him or say no, he can always be recruited later. You’ll find him leaning on the storage crates he was arguing with the guards at.

Felix is a budding revolutionary, so his perks are: How to get companions: Ellie.

Ellie can be a little hard to miss if you are not running side quests, or poking around the Groundbreaker. Once you reach the old colony ship head to the Medical Bay located in the back left corner of the bazaar, behind the Spacer’s Choice stall. Inside you’ll find Ellie arguing with the receptionist; talk to her and agree to help her friend, Jessie. You’ll be given the quest Worst Contact, and it’s simple.

Go into the Medical Bay care room and you’ll see a Restricted Zone. You can stealth through these efficiently with the holographic shroud Phineas gave you, and the ID chip you need to use it in the Medical Bay restricted zone is on the table next to the door. Grab it, walk in, and head right into the quarantine. Jessie is in the room on the right; talk to her via intercom and she’ll let you in. Tell her you will handle her debt with the Board, then go back to Udom at the Halcyon office. You can either pay her debt (for nearly 2k bits), or use a 20 Persuasion check to place her into indentured servitude. Either option works, so after you’ve made your choice head back to the Medical Bay. Talk to Ellie to complete the quest, and she’ll ask to join up. Tell her yes and she’ll join your crew.

Ellie is a doctor, so her perks are: How to get companions: S.A.M.

Once on your powered ship, go upstairs to the crew cabins and inspect the broken SAM unit. From here you can head back down to ADA, where you’ll have the option to ask her about it. She’ll mention Hawthorne was looking into repairing the bot, and that his information was saved to his terminal. Go to your captain’s cabin and use the terminal: you’ll see an option for SAM, and within that read the third note. You’ll be given the quest The Cleaning Machine, which tasks you with acquiring an Acid Sweeper.

While you can technically start S.A.M.’s quest as soon as you leave Edgewater, you can’t actually complete it until you have access to Roseway. Once you’ve accepted Glady’s request for Passage to Anywhere, return to your ship, listen to the distress call when talking with ADA, then set course for the settlement. Once there, the Acid Sweeper can be found in the storage facility to the south of the landing pad, around the hills. If you are pushing The Distress Call as a quest do that first: you’ll get a quest from a scientist that leads to the facility, so it’ll minimize how much backtracking you do. Once inside the facility, the sweeper can be found upstairs in a closet.

Return to your ship, and go to the SAM unit. You’ll be able to install the sweeper, and in effect recruit SAM.

SAM is a cleaning automechanical, so his perks are: 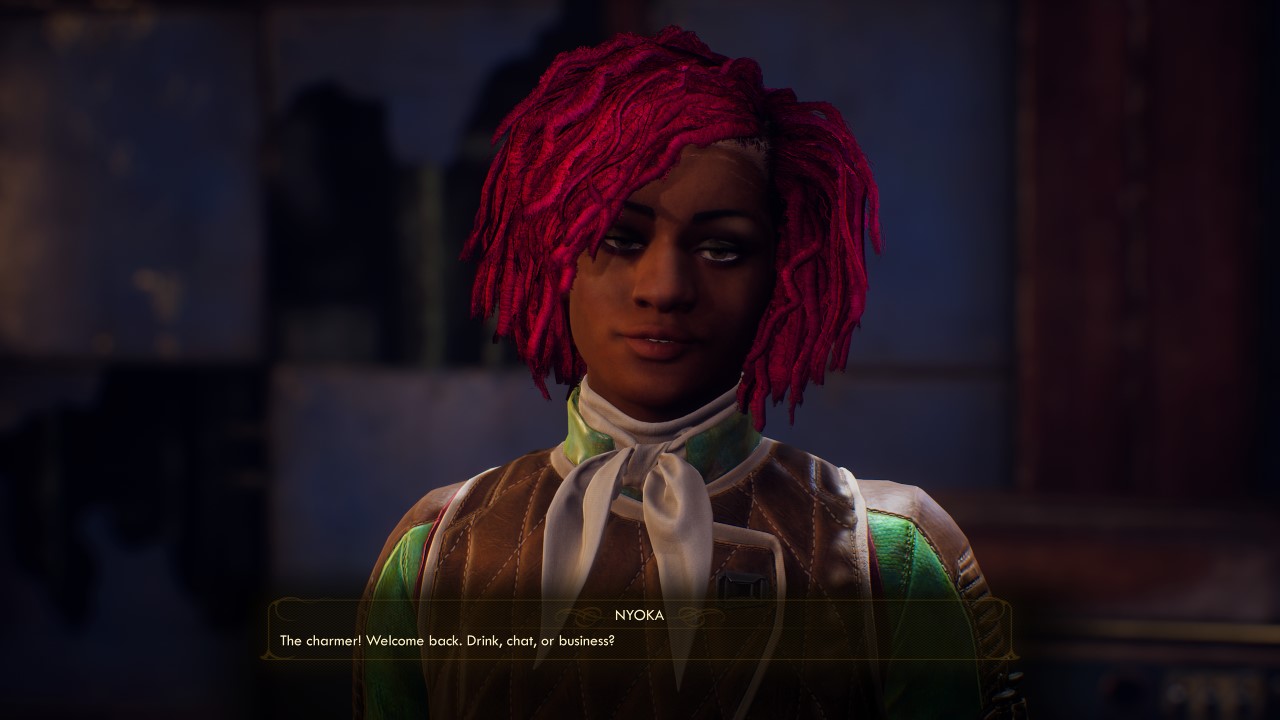 How to get companions: Nyoka.

You’ll encounter Nyoka in Stellar Bay, and she is a part of the main quest – Radio Free Monarch. Talk to her in the Yacht Club: you can opt to not assist her, but if you do you can recruit her. She’ll give you the quest Passion Pills, and you’ll need to get her some caffeinoids. There are a few ways to go about his quest, detailed here, but the simplest route is to bribe the clerk for the pills. Once you return to Nyoka and clear her hangover she’ll offer to join up with you.

Nyoka is a talented hunter and scoundrel, so her perks are.

That’s how to get companions in The Outer Worlds: none of them are cosmic to recruit, but there is some busy-work required for a most. You can recruit them at any time, so don’t fret if you missed one. For more The Outer Worlds guides and walkthroughs be sure to check out our guides page.

Home / Game Guides / The Outer Worlds: How to Get All Companions