Go into battle without these and you'll be sorry. Warframe players are intimately familiar with mods, and Digital Extremes has decided to carry that system over into Railjack with Avionics. Yes, my fellow Tenno, your Railjack has its own system for mods, but there are enough alterations here that warrant some explaining.

Avionics are mods for your Railjack, and they come in three flavors.

Avionics are where you buff and alter your Railjack to survive the trials ahead. Like mods, they are attached to increases in health (hull, in Railjack’s case), turret damage, heat management, and damage mitigation. Without Avionics equipped even the best components and armaments will prove worthless against the ever increasing power of your foes.

Avionics come in three categories, and each mod can drop from one of the three houses/variants on offer (Lavan, Vidar, Zetki). Integrated mods are your core system mods such as health, armor, shields, and damage. Tactical mods are abilities that can used from the Logistics menu (L on PC), and they provide utility (such as putting out fires in your ship when activated, allowing your crew to focus on other more pressing issues). Battle Avionics are special attacks or abilities that can be used from either the pilot’s seat or the gunner nests, and these can range from a crowd controlling black hole to a swarm of missiles that blot out the sky.

Each Avionic will come with a cost to install (shown next to the Avionic by a little icon I can best describe as a spear), which is subtracted from your total Avionics capacity when installed. Reach zero and you can’t install any further Avionics, nor upgrade installed ones without having them removed. The only way to increase your Avionics cap is through your reactor, found in the components page. Your Railjack will start with a base capacity of 30, but can reach a max of 130 with a +100 reactor. If you want to boost your capacity you need to focus on acquiring a better reactor from wreckage drops. 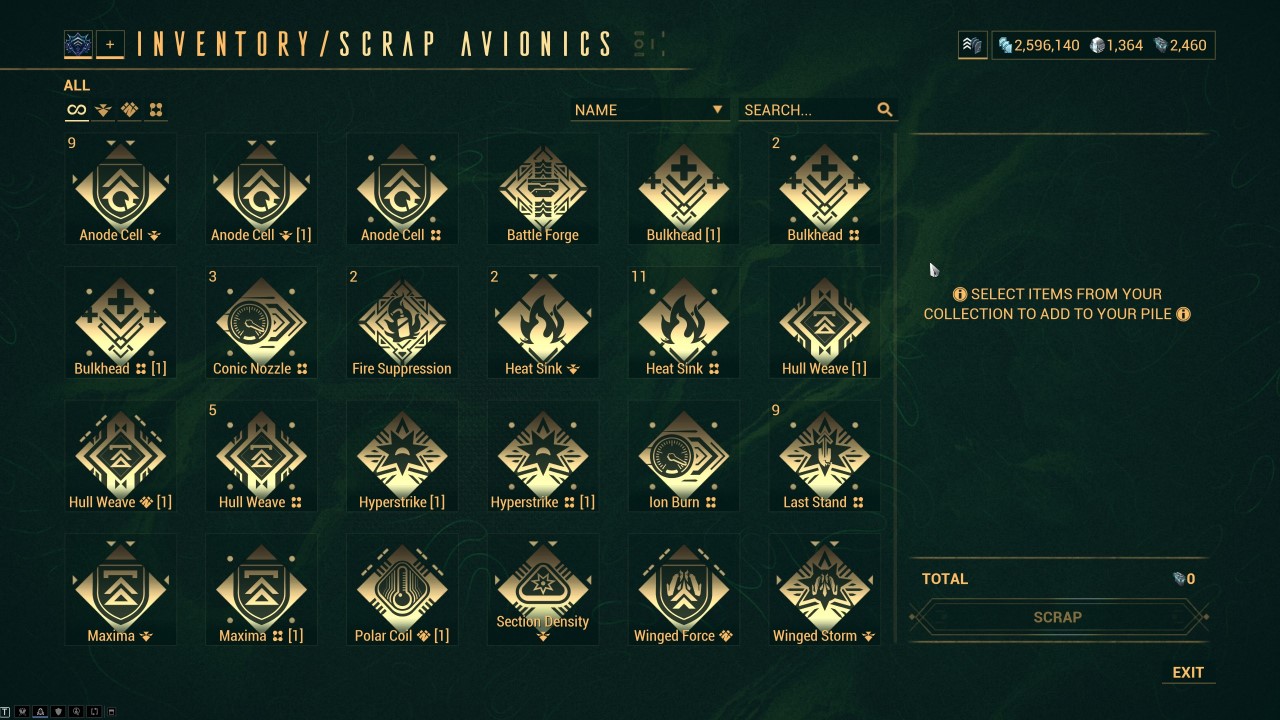 There is a way around the cap, though, and that is via the Grid tab at the bottom of the Avionics screen. When you select Grid, you’ll be presented with a UI of all your Avionics slots, and you’ll see three empty symbols below each. What upgrading a slot does is it allows that slot to add a passive +1, +2, and eventual +3 to the Avionic slotted within that slot. This allows you to get free pips (I.E. boosts) out of the Avionic within that slot.

There is a cost to this, and that cost is in Dirac – Railjack’s form of Endo. Dirac can be earned either by scrapping wreckage, scrapping Avionics (via the scrap option at the bottom right of the Avionics page), as a rare drop in Railjack missions, or as an end-of-mission reward. It’s not difficult to stockpile, but upgrading an Avionic slot should be done with consideration.

The price increases with each improvement, going from 200 Dirac for the first pip, to 600 and 1800 Dirac for the second and third respectively. That means you’ll need 2600 Dirac to max one slot, and with 15 slots your are looking at 39,000 Dirac to max them all. So, yeah, prioritize critical stats like hull health and weapon damage first.

Outside of the grid, Avionics can be upgraded with Dirac like regular mods. Click on the Avionics tab next to Grid and you’ll be presented with a list of all your equipped mods. So long as they have an open pip they can be upgraded, but the cost does increase with each additional upgrade, much like mods. 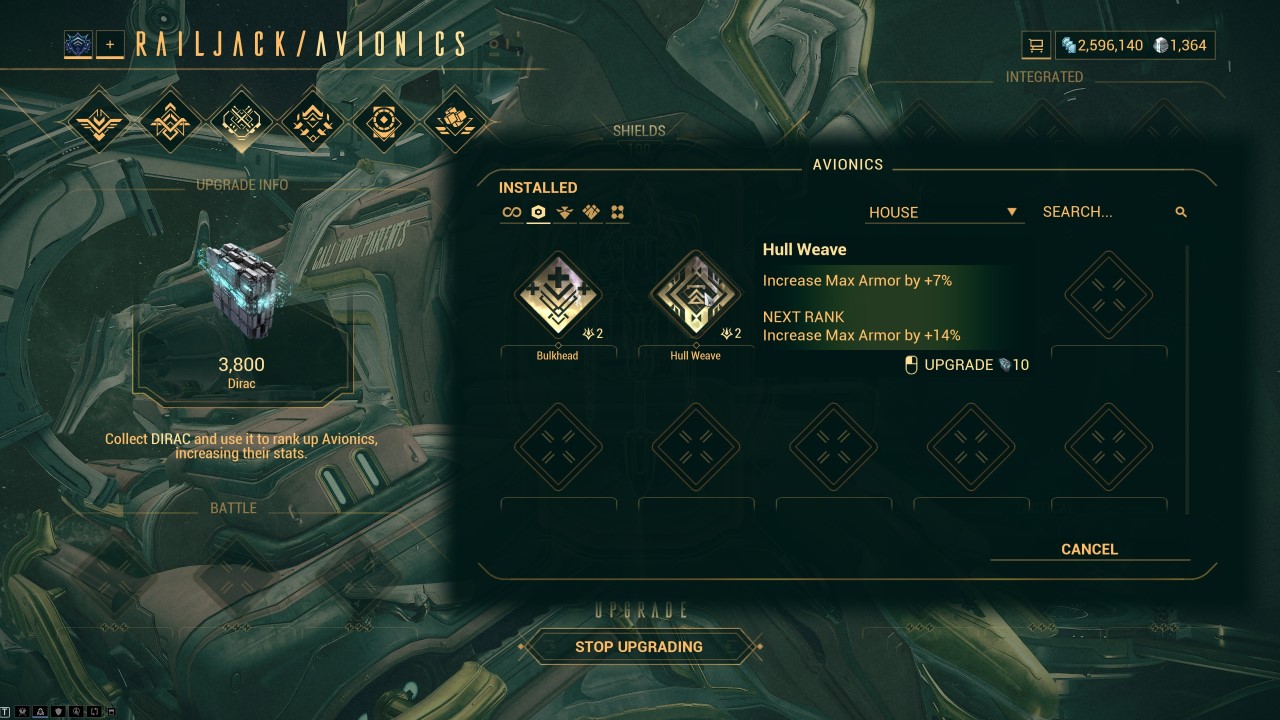 A word to the wise: Zetki Avionics are almost all universally the best to have, and the rarest to find. All Avionics drop within Railjack missions, with a yellow-aura around them. They can be from any of the three categories (though Integrated are the most common by a long shot), and they can roll from any of the three houses. Zetki just so happen to be the rarest.

While the other two houses may start with a higher boost to the offered stat, Zetki mods have the most upgrade pips (and therefore the highest Avionics cost, even at their base level). Use Lavan and Vidar Avionics to work around your capacity limitations when starting out, but you will want to hold onto all your Zetki Avionics (they have the dashes surrounding the portrait, unlike Lavan and Vidar with their dots and triangles).

For more of our Railjack Guide series be sure to check back in with our guide hub!