A mod setup to build Rhino Prime for tankiness and DPS Rhino is definitely the new player carrying Warframe, given his strengths in survival and damage boosting. In the game’s current meta, he’s not up there with the greatest, but still has his uses in particular places. He has a solid kit for a frame that has been around since the initial release of the game.

For this guide, I focus mostly on his Iron Skin and Roar abilities. With the unvaulting of Rhino Prime on August 10, he’ll be once again in the hands of many players who haven’t gotten the chance to yet. For the purpose of this build, I maximized the strength and duration values for Rhino Prime while sacrificing efficiency and range. In dedicated teams for running Eidolon captures, the DPS is usually a Chroma or Rhino, since they can reliably dish out tons of damage with their signature abilities. You will mostly be sticking to using his Roar ability, though if you want to have more survivability, Iron Skin could also be casted, though it shouldn’t be necessary in dedicated groups.

While the build displayed is not fully optimized with something like a Corrosive Projection or Growing Power mod in the aura slot, I simply used Steel Charge to fit in two Umbral Mods. Keep in mind, the normal Intensify mod will do the job too. The mod in the Umbral Fiber slot can be substituted with something like Constitution or a survivability mod, or ideally an augment like Iron Shrapnel. 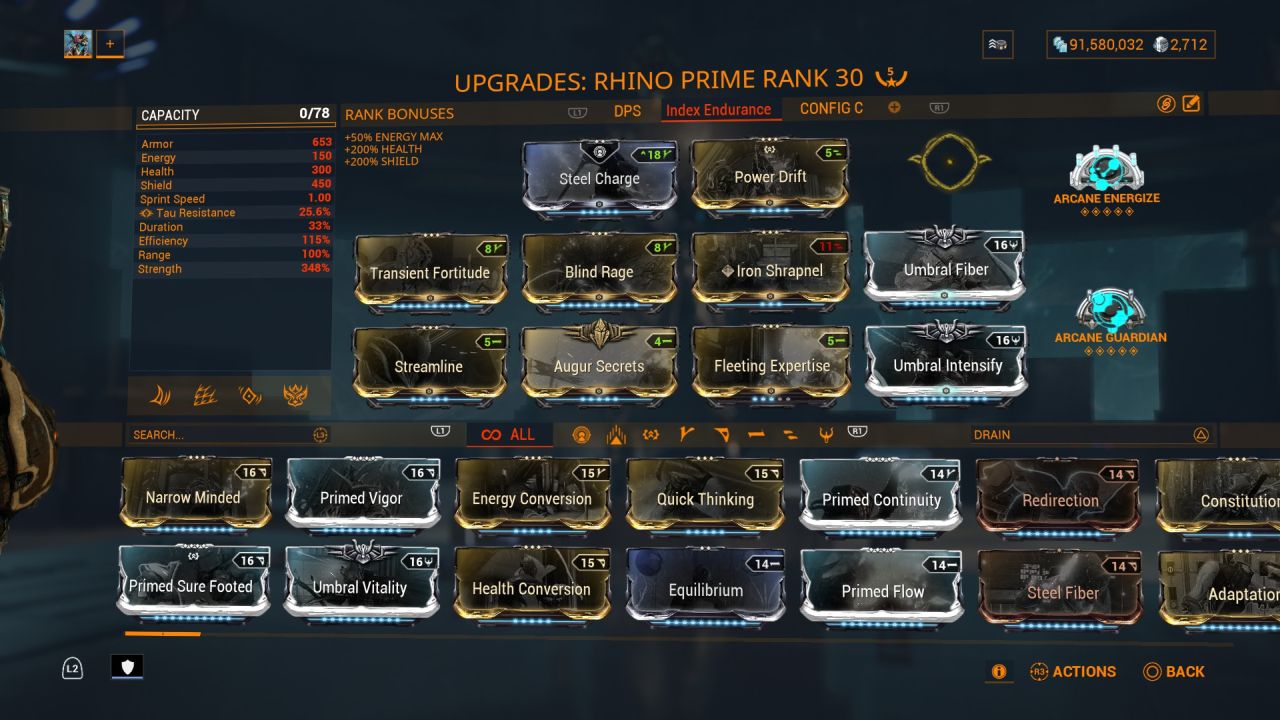 This is a build catered for running The Index. It’s a great farm for credits, Corpus weapon mods, and fighting John Prodman. For this build, you want to slap on as many power strength mods on as possible, while fixing up the efficiency for subsequent casts. This tank build isn’t something as strong as something like a Nidus, Valkyr, Wukong, or Chroma.

What this does have over the other listed Warframes is that Rhino’s Iron Skin does not get negatively affected by the Financial Stress debuff when you pick up points. Note that with the more strength mods you put on, you’ll be sacrificing duration. Rhino’s Iron Skin is not affected by duration. You won’t be necessarily dishing out boosted damage with Roar due to low duration times.

Having the Iron Shrapnel augment is a must for this build too. It allows Rhino to shed the current Iron Skin he has on and recast it. Normally, you’d have to take enough damage or fall out of bounds to cast it again. With the Iron Shrapnel mod, it’ll allow for you to run to a safe spot and cast it again, lowering your chances of taking fatal damage.

This is in no way the only way to play Rhino Prime, but it’s using his most useful abilities and making use of them in the everchanging meta of Warframe. These builds can also be applied for the standard Rhino Warframe.