World of Warcraft Shadowlands: How to Unlock Threads of Fate for Alts

Skip the story and level as you see fit with this new feature. 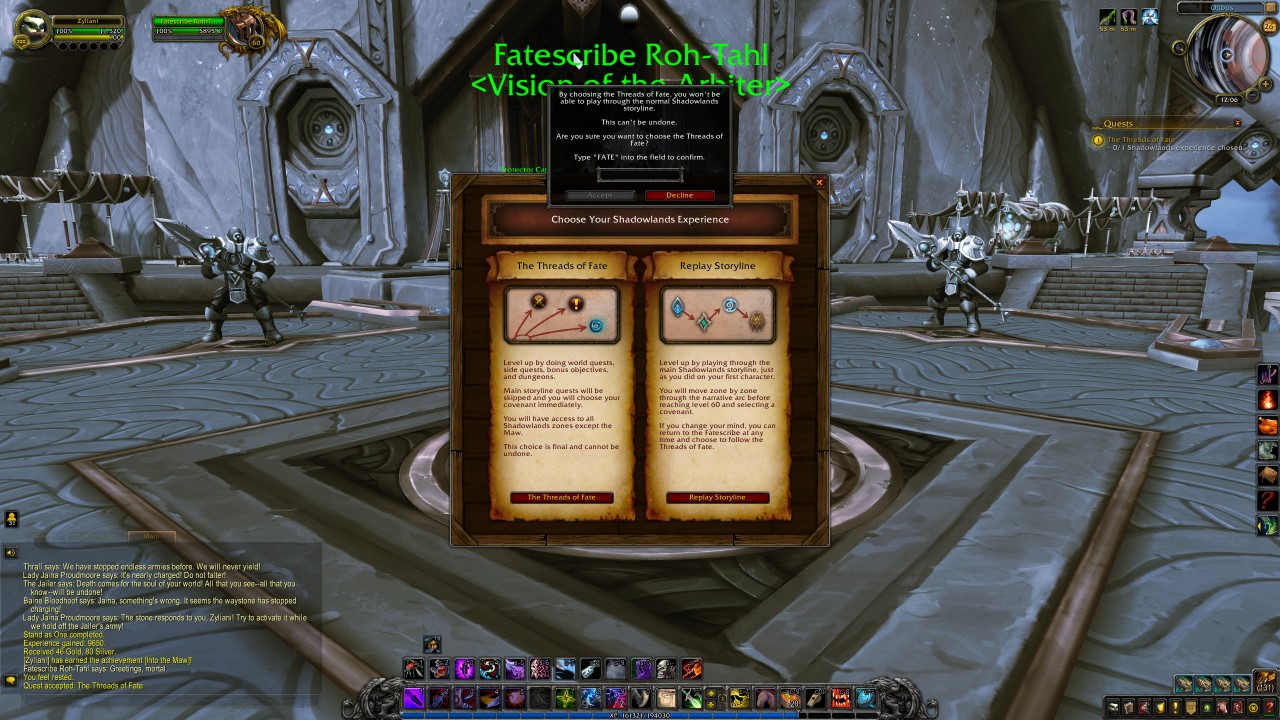 World of Warcraft Shadowlands features a linear story, but those leveling alts can skip it if they wish thanks to the Threads of Fate. This new leveling system allows players who’ve already reached level 60 and cleared the campaign to bypass the story on their other toons, but there are a few caveats.

The Threads of Fate is unlocked after clearing the story and reaching level 60 on at least one character in Shadowlands.

Once you reach level 60 and complete the leveling campaign on your first character you’ll unlock the Threads of Fate feature for your alts. This system allows you to pick your Covenant immediately after opting in, and it will mark the campaign as “complete” for that character. There are a couple of wrinkles you should be aware of before choosing Threads of Fate however.

All characters will have to complete the introductory quest-chain for Shadowlands in the Maw. That means heading to Icecrown, creating the portal to the Shadowlands, then escaping the Maw. This can be completed in roughly 30 minutes to an hour, but it’s a bit of a drag to repeat the entire sequence over and over again on multiple alts.

Once you’ve escaped the Maw and arrived in Oribos time will freeze and you’ll be greeted by Fatescribe Roh-Tahl. This is your first opportunity to select the Threads of Fate, but you are free to replay the storyline and opt into the Threads later by returning to Oribos and speaking with the Fatescribe. That said, picking the Threads of Fate is a permanent choice in Shadowlands. Whether you choose it after escaping the Maw or later you’re locked in. Because of this you will receive a prompt to type the word “FATE” to confirm your selection, and attached is a warning that your choice is final once you click Accept.

The Threads of Fate system isn’t a bad way to level alts, but as of publication it could use a little tuning. Choosing your Covenant early means you’ll have access to your Covenant abilities out of the gate, and can farm Anima as you level. You’ll still need to reach level 60 before unlocking Renown quests, Soulbinds, and other endgame features, but it’s a start.  You will have access to World Quests, all the major side quests will be marked on your map, and you can visit any zone you desire. Dungeons remain level-gated, but these and PvP can be used to effectively level. The tuning issue is associate with Bonus Objectives: currently they take too long to complete for the experience rewarded.

If you are looking to level as fast as possible the story remains the most efficient route. Do keep in mind that if you hit level 60 while playing the story you will be locked out of the Threads of Fate. This means the most optimal way to level is to stick with the story until you are level 59 and nearly 60. Before you ding that final time head to Oribos and turn on the Threads of Fate, then wrap up your leveling. You’ll skip over whatever story quests you had left and jump straight into the endgame. That said, repeating the story ad nauseum does get old pretty quick, so if you don’t mind the slower leveling pace give the Threads of Fate a peak.

Home / Game Guides / World of Warcraft Shadowlands: How to Unlock Threads of Fate for Alts