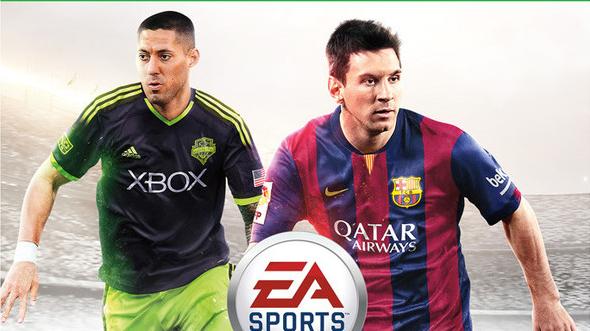 In most countries, Lionel Messi is on the cover for FIFA 15 on his own. In North America however, you get Clint Dempsey wearing an Xbox shirt joining him.

It’s obvious EA Sports would put Clint Dempsey on the cover for FIFA 15 in North America. He is the face of the USA Football team that actually did a pretty good showing at the FIFA World Cup in Brazil earlier this month. The USA Football team also won an ESPY Award last week for their valiant victory over Ghana. USA weren’t expected to get out of the group stage, so it was a big achievement going into the next round for them.

It’s interesting to note that Clint Dempsey is wearing an Xbox shirt for the Xbox One and Xbox 360 covers for FIFA 15. This isn’t reciprocated for the PS4 and PS3 versions of the game however. He just wears his normal USMNT jersey. Xbox sponsors the USMNT team so their logo is blasted all over the jersey. Obviously the same jersey cannot be worn for the PlayStation cover as that would look very weird.

FIFA games usually sell much better in Europe than over in North America. Putting Clint Dempsey on the cover for FIFA 15 might help push the sales for this year’s game.