The latest news in the world of video games at Attack of the Fanboy
July 8th, 2015 by Dean James 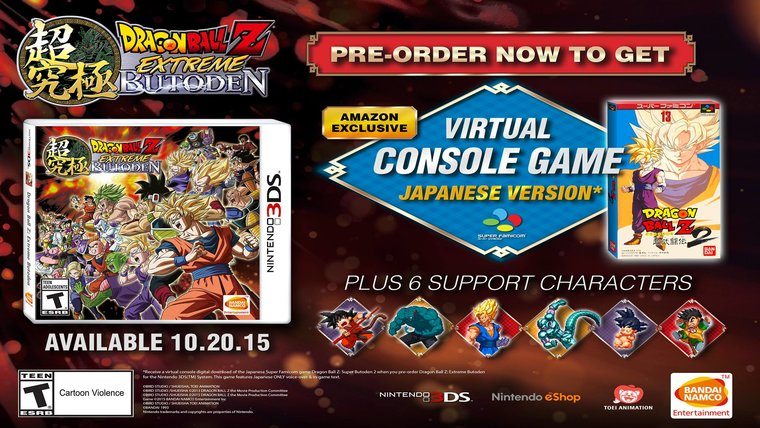 Dragon Ball Z: Extreme Butoden was announced a few months ago and just released last month in Japan. Soon after it was released there, a US release was officially announced, making this one of the few in the series to come out here. For those looking to pre-order, Amazon is a must based on their spectacular pre-order bonus.

We recently learned that Europe was getting a special New Nintendo 3DS bundle in Europe that included special faceplates for the smaller New 3DS, which the US didn’t get, along with an digital version of a previously exclusive to Japan DBZ game for SNES.

We knew that specific bundle wouldn’t be coming to the US, but it has been revealed that the digital Japanese version of Dragon Ball Z: Super Butoden 2 for SNES will be a special pre-order bonus only at Amazon for those that pre-order Dragon Ball Z: Extreme Butoden. This news came from the official Dragon Ball Z Games Facebook, which includes the above picture that says you get the Amazon exclusive “Virtual Console Game Japanese Version.”

SNES games are certainly not part of the Virtual Console on the 3DS, so it has to be something similar to the way the 10 Ambassador GBA games were handled or something. It is an interesting precedent though as a bonus with a game, so hopefully more games offer something like this in the future, though it would be better if it came with all copies of the game, rather than just as a pre-order bonus.

There is also mention of pre-orders being able to unlock early access to 6 assist characters, but the wording doesn’t seem to say if that is Amazon exclusive or the case with all pre-orders.

Dragon Ball Z: Extreme Butoden will be released for the Nintendo 3DS on October 20 in the US.