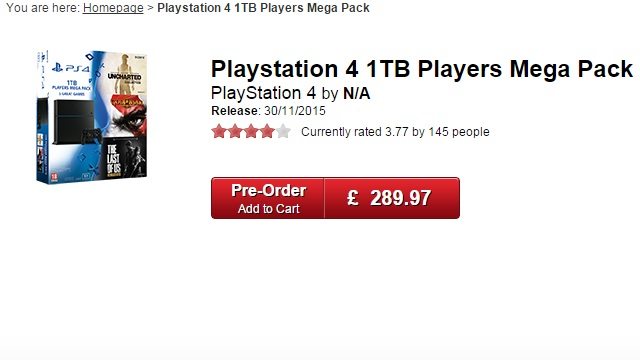 As noted by VideoGamer, the listing for this new PS4 console bundle was listed by Gamestop UK.

The bundle in question includes a 1TB PS4 as well a copy of Uncharted: The Nathan Drake Collection, The Last of Us Remastered and God of War 3 Remastered. You get three games (or five counting the trio in Uncharted) all for only £289.97.

The bundle is available to pre-order now and will be out from November 30th. VideoGamer also notes that this bundle has not been listed by any other retailer yet.

The reason this bundle is decent is because of the £289.97 price tag. The normal price for a 1TB PS4 usually goes for a price of around £329 with a game bundled in.

It’s worth noting that all of the game bundled in are PS3 remasters. This might not be suitable for previous PS3 owners if you want to play a new legitimate PS4 video game.

Still, this is a good deal if you never played these games before. All of the games have been successful and are popular with both critics and fans alike.