It's short, sweet, and has a reward at the end. Immortals: Fenyx Rising may be a little over a month away from launch, but you can play a demo of the game starting today with Stadia. No, it’s not my platform of choice, but the demo is free to everyone. No subscription or paid membership is required: just pop on over to the Stadia homepage, and click play. There are a couple of things worth pointing out, however, before you jump in.

The Immortals: Fenyx Rising demo is available from October 22nd till October 29th.

The Immortals: Fenyx Rising demo is only available for a limited time, running from October 22nd till October 29th. The demo is a short, curated tutorial, and is not indicative of the final product. I mention this, because it’s literally a somewhat linear slice of the game with unique narration not found in the base game. The open world isn’t open to explore, but the demo does show off many of the underlying systems driving Immortals: Fenyx Rising. You’ll fight undead Spartans, craft some potions, climb statues, and glide from island to island. It’s not super robust, but there’s still plenty to enjoy. Our own Diego played four hours of the game during a recent preview event, so if you want to know how more about the full game be sure to check out his article. 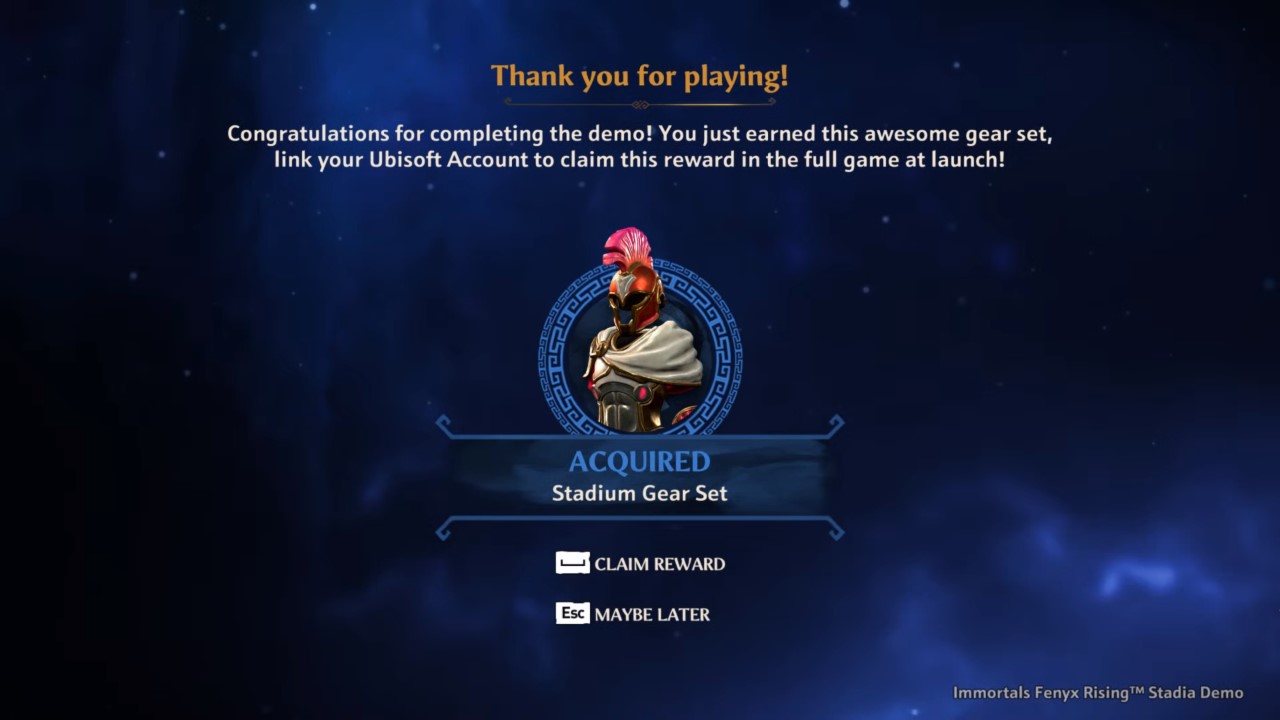 Personally, I liked what I saw mechanically. Despite being unable to fully explore even a segment of the massive open-world, the combat, gear, and skill systems are all up my alley. Even if you have no plan to play Immortals: Fenyx Rising on Stadia at launch you should still give the demo a peak if you’re interested in the game at all. Completing the demo unlocks the “Stadium Gear Set” for use in the final game, and all you need to do is link your Ubisoft Account at the end to claim it. So, play the demo and earn some snazzy new gear to use wherever you so please. Not a bad deal, all said. You can check out the demo here, but this being Stadia do keep in mind your connection will play a role in how well the game looks and runs. If it feels like ass you may need to try again later with better internet.