The latest news in the world of video games at Attack of the Fanboy
July 9th, 2015 by Kyle Hanson 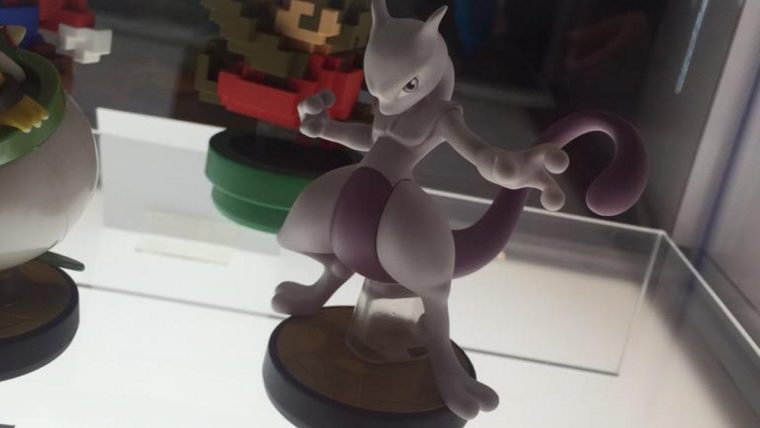 Nintendo rolled out the Amiibo display at E3 2015, showing off a ton of upcoming figures from the highly successful line of toys-to-life collectibles. Everything from Wave 5 and 6 to Super Mario 30th Anniversary, and beyond. However, one thing was missing that we knew was coming eventually, DLC characters.

That has changed with the latest addition to the display, which made a surprise debut at San Diego Comic-Con, which officially begins today. Last night during a preview event Twitter user Alan Lopez spotted a Mewtwo Amiibo among the usual suspects in the display in Nintendo’s booth.

Mewtwo was the first DLC character to release, so it only make sense that he be the first to receive an Amiibo. However, there are still characters from the main game that haven’t had Amiibo released, though they’ve all been announced at this point.

So, while we can get a look at Mewtwo, he likely is just a prototype and won’t be releasing any time soon, with Waves 5 and 6 hitting later this year. And, of course there are other Amiibo lines coming for Animal Crossing, Chibi-Robo, and more.

One question that will need to be answered about this Amiibo is, will it function with the game if the owner doesn’t have the DLC. Presumably it could, unlocking an uncontrollable AI version of the character, but it might require the DLC to function properly.