Map design said to be key in making players move in Modern Warfare 3. 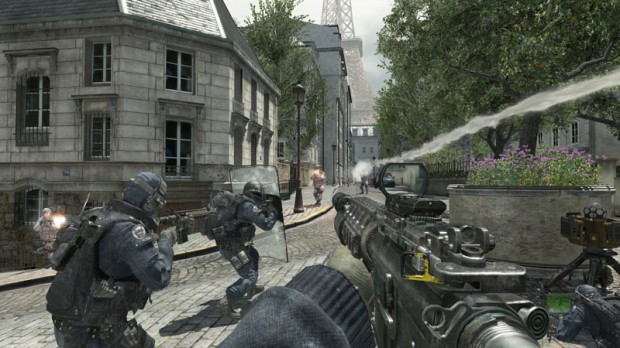 One of players biggest gripes about the Call of Duty franchise is the element of camping.  If unfamiliar, camping is an in-game tactic where players will attempt to hold down a specific area of the map (usually a corner) where they can attempt to rack up kills while moving very little.  The strategy involves waiting for the battle to come to you, and many online gamers despise this activitiy.  Call of Duty might not have invented camping, but the game design decisions have certainly helped in promoting its use in their games.

Mark Rubin spoke at the recent Call of Duty XP Event, and discussed the methods by which the developers are tending to map “flow”, and their hopes that it will entice more players to move more freely around the maps.

“When we looked at that with MW3, we decided that we wanted to get the cool part of verticality and the cool kind of engagements, but we didin’t want to make it so complicated that anywhere you ran you were under fire or that there was danger from every single point. We wanted to have a really good flow to match, and I think that is something CoD4 had nailed really well. I think Crash is still considered one of the best multiplayer maps in any FPS. It has good flow, so our designers spent a lot of time going back to the old Call of Duty maps and other older games to look at the great maps from other games… “Having a map with good flow makes you feel comfortable moving through the map,” he said. “If the flow is not good, people won’t move as much because they are paranoid of getting shot. So, having a good flow is one thing, the other thing is to try not to put – well, you always put these points in because it is impossible to test as much as the public will on day one, honestly when the game ships, during the first 10 minutes you will have more test time on the game than we have in the entire two years of development because of the numbers.

Map flow is great and all, but one of the major reasons why people camp in Call of Duty is because of the overpowered Killstreak perks that reward you for doing so.  We’ll see how Call of Duty’s multiplayer finishes up come November, but Infinity Ward and Sledgehammer have been quite public about this war on campers in Modern Warfare 3.