The latest news in the world of video games at Attack of the Fanboy
December 2nd, 2015 by Dean James 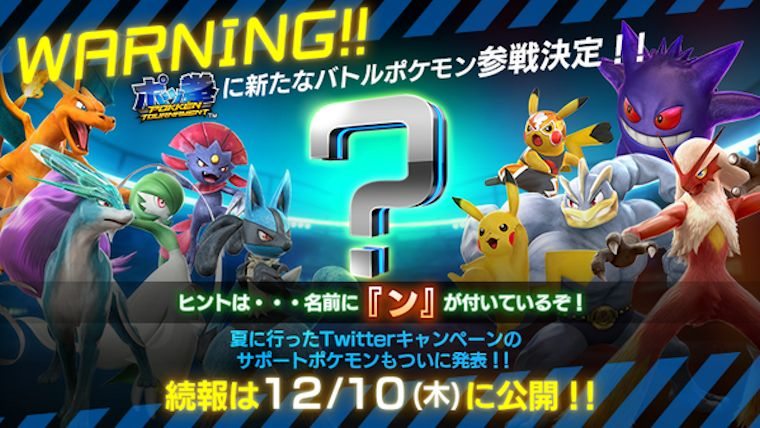 Pokken Tournament is already out in Japan through arcades, with a release set for Wii U in early 2016. The arcade version is consistently being updated, and yet another fighter and support character for the game are set to be revealed very soon.

Pokken Tournament utilizes an interesting system with main fighters, as well as those that are only for support in battle. With the latest tease, one of each is about to be announced.

Specifically, the official Pokken Tournament Twitter has teased the reveal of these two new Pokemon for the game to come on December 10.

Thanks to translation by Gematsu, the tweet gives a very small hint that says the name of the new fighter includes a “ン” in the name.

There are certainly a lot of Pokemon that fall in this category, so it’s hard to even start to predict who this could be. For those that want to start to guess, someone on NeoGAF put together a list of every single Pokemon to include this in their name.

I’m personally hoping for someone like Alakazam or Typhlosion, but we’ll just have to wait and see when the announcement for Pokken Tournament comes next week on December 10.