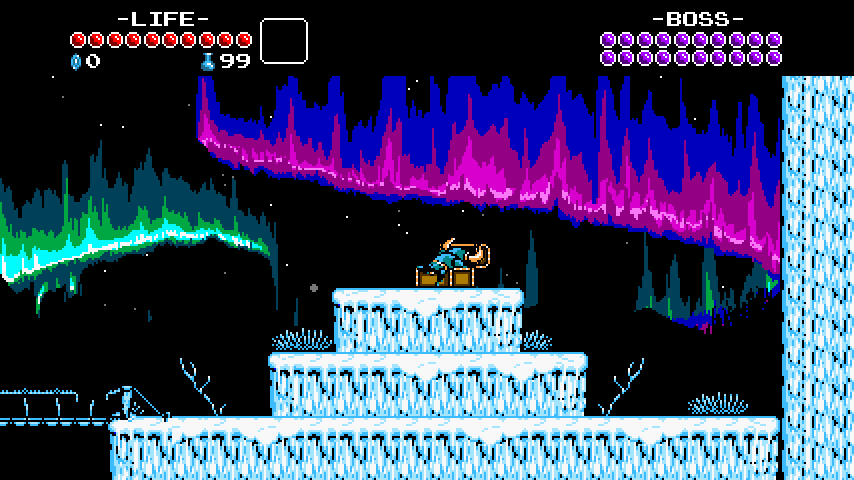 After an extremely successful Kickstarter the retro-platformer Shovel Knight will hit Wii U, 3DS, and PC on June 26th. The game has been a fan sensation at various conventions, such as PAX and Minecon. The release has had many delays since the original Kickstarter ended in April 2013, but after a long wait the release is just around the corner.

Shovel Knight is a 2D sidescrolling platformer that uses retro graphics and classic design principles. You play as the titular Shovel Knight who uses his shovel to attack enemies, navigate the map, and dig up buried treasure. Shovel Knight draws inspiration from many classic platformers, such as being able to use your shovel like a pogo stick as in Ducktales.

The story fits with the retro styling as well. You must go on a quest to defeat the evil Enchantress, but to do so you have to fight her minions, The Order of No Quarter. The Order consists of eight members, many of which will become playable in various modes once they have been defeated. Thanks to meeting the game’s stretch goals Shovel Knight will contain a 4-player battle mode, as well as the main single-player adventure.

“Shovel Knight is a sweeping classic action adventure game with awesome gameplay, memorable characters, and an 8-bit retro aesthetic created by Yacht Club Games. You play as the eponymous Shovel Knight, a small knight with a huge quest. Shovel Knight has come to this valley with two goals: to defeat the evil Enchantress and save his lost beloved. He wields a ShovelBlade; a multipurpose weapon whose techniques have now been lost to the ages. Always honest and helpful, Shovel Knight is a shining example of the code of Shovelry: Slash Mercilessly and Dig Tirelessly!

However, between Shovel Knight and his beloved stands a cadre of villainous knights. These terrible foes, known as The Order of No Quarter, have been dispatched to prevent Shovel Knight from reaching the Enchantress at any cost!”

More on Attack of the Fanboy :
3Ds Nintendo Nintendo Wii U Shovel Knight