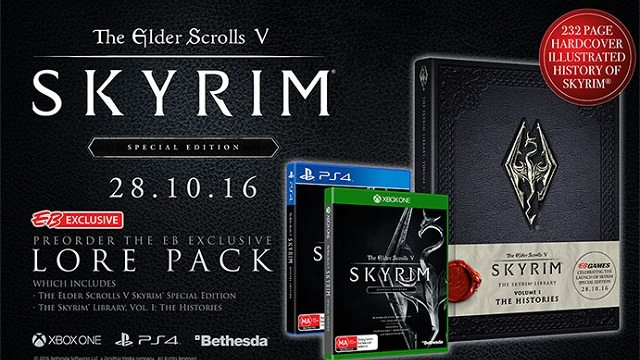 EB Games Australia has announced a special ‘Lore Pack” that you can get for the remastered version of The Elder Scrolls V: Skyrim on consoles.

The Lore Pack for  The Elder Scrolls V: Skyrim Remastered is exclusive to EB Games Australia and is only available for the PS4 and Xbox One versions of the game. They both have a recommended retail price of $99.95 Australian dollars.

The special Lore Pack includes the game itself plus “The Skyrim Library Vol 1: The Histories”. This is a 232 page hardback cover book that has the illustrated history of Skyrim.

The game and this special edition releases in Australia on October 28th, 2016. The game is also available for the PC platform, although the Lore Pack is a console exclusive.

In case you are wondering, the standard version of the game is selling for $79.95 Australian dollars on the EB Games website. This means you are only paying $20 extra for the hardback cover book. This is not a bad deal as sometimes these books cost a lot more than $20 over in Australia.

The Elder Scrolls V: Skyrim Remastered includes better graphics than the vanilla version and also has the DLC packaged in. Not to mention console gamers can also experience mods.