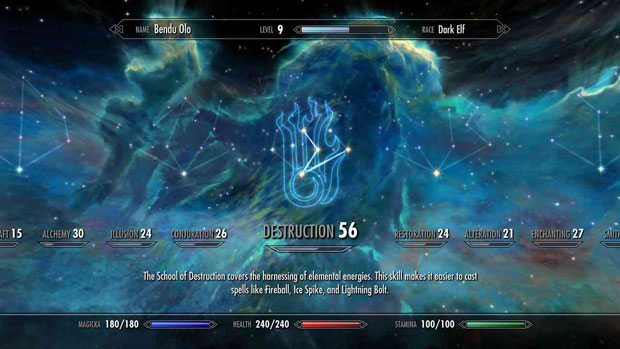 The Elder Scrolls V: Skyrim will finally launch next month.  The dragon infested land will be yours to explore, with a character who you can tailor to your liking.  Within The Elder Scrolls V: Skyrim Perk Tree you’ll have the ability to build skills in a wide variety of areas, like:  Archery, Sneak, Two-Handed, Heavy Armor, Restoration, Alteration, Destruction, and more.

At this point, the list of Perk Trees below are said to be “mostly complete”, and were found on the Bethesda forums where they were originally compiled.  They go hand in hand with the Racial Abilities that were found recently as well.

Alchemy Potions 20% stronger (5 ranks) Potions for restore health, magicka or stamina are 25% more powerful (maybe ranked) Poisons 25% more effective (maybe ranked) Poisons last for twice as many hits Two ingredients are gathered from plants 50% resistance to all poisons All negative effects removed from potions and all positive removed from poisons 2 effects of an ingredient are revealed when testing it for the first time (instead of just one)

Prepare to look to the heavens and create your skill set, The Elder Scrolls V: Skyrim launches on November 11th for the Xbox 360, PS3, and PC.