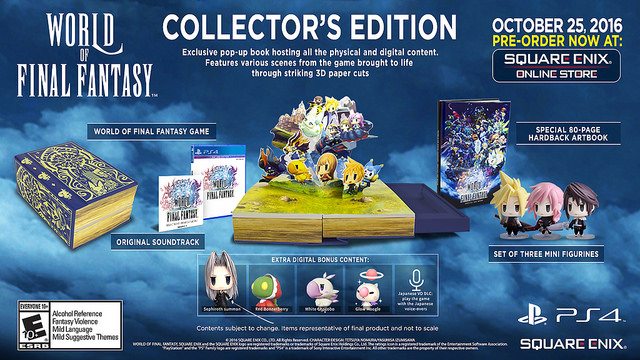 Sony and Square Enix have announced that World of Final Fantasy will be receiving a collector’s edition that is coming out exclusively for the PS4.

First there’s an exclusive pop-up book that contains famous scenes from the World of Final Fantasy video game. All of the content in this collection fits inside this book so it’s pretty big. There is also a separate art-book that is 80 pages long. It has a hard cover that features the creative art direction of the game.

Final Fantasy games always have great music so this collection includes a soundtrack. The soundtrack has 20 songs that are featured in the actual video game.

Lastly, the following DLC is included:

World of Final Fantasy will be released on October 25th in North America and October 28th in Europe. This collector’s edition is exclusive to the PS4, but the normal game is also out for PS Vita.