From the very moment both players emerge out of the opening sequence, to the epic crescendo of the final chapter, It Takes Two truly innovates at every moment during its entire duration.

Most co-op video games are designed to be played by a single player, with the addition of co-operative gameplay for players that desire to experience the game with a friend. For some games, co-op offers the very best way to play, but Hazelight Studios , with the direction of Josef Fares, have designed It Takes Two so that the only option to play the game is with a buddy.

It’s been three years since the debut of the studio’s first fully co-op outing, A Way Out, and while it was truly something special and offered a breath of fresh air from other co-op games by designing the game from the ground up with only two players in mind, It Takes Two takes this idea to another level.

Players are first introduced to the protagonists, Cody and May, by learning that they’re going to get divorced. Their daughter Rose overhears them and, like most children in her situation, just wants her parents to be friends again. Cody and May are then magically transformed into dolls that Rose has made to resemble her parents, and are introduced to a talking book entitled The Book of Love, named after its author, Dr. Hakim. As his name would suggest, the excitable and extremely zealous Dr. Hakim’s mission is to encourage Cody and May to re-build their relationship through collaborative experiences throughout their home.

The story might not sound all too exciting, and while some fantastic voice acting and humor does make the story shine (which also goes to some surprisingly dark places at some points), the incredibly varied environments, game mechanics and ideas are what elevates It Takes Two among the best games of recent memory, and easily one of the greatest co-op games of all time. Innovation. For me, this is what truly drives gaming forward. Some of my favorite games include Super Mario Galaxy and The Legend of Zelda series. While being quite different in terms of gameplay, these games offer constantly new inventive mechanics, and make clever use of the player’s knowledge of the game mechanics already introduced to push the game onward. Hazelight Studios borrows from the genius of these games and crafts a truly innovative and creative platforming adventure with new ideas at every corner.

The gameplay itself initially seems very simple – you have a double jump and a dash, and that’s it. However, each chapter of the game gives Cody and May a new ability or game mechanic to help them progress through the world. These abilities are introduced in a simple way to let players get to grips with their new move set, and then get progressively more inventive and challenging as the chapter progresses. This may sound like many games that have come before, but every single one of these abilities completely transforms the way that situations are tackled and it makes each chapter feel unique. The developers push each ability or mechanic to its absolute limit while being careful to make sure that none of them overstay their welcome and continue to invent fresh ideas at every moment.

Almost all of the abilities and game mechanics in It Takes Two require both players to work together to progress. While playing the game, you can really feel that it was designed with co-op gaming at its core, and there’s really not many games out there that come close in this regard. For example, one of the earlier chapters gives Cody a sticky tree sap launcher and May a rocket launcher that blows up the tree sap. Both players can use their newfound abilities on their own to solve certain puzzles, but most of them require players to think together and combine their abilities in creative ways. 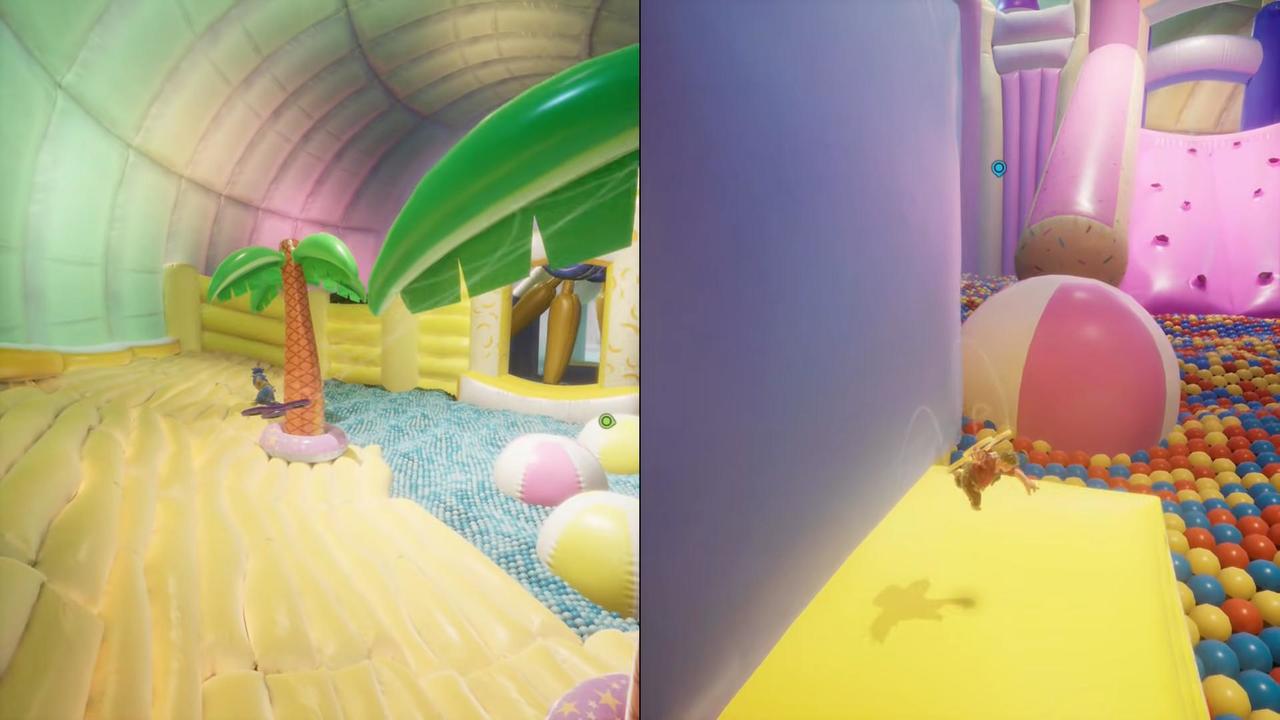 The puzzles are really great – I made reference to The Legend of Zelda earlier, and this is a true compliment. Just like Nintendo’s powerhouse of the gaming world, It Takes Two manages to prod both players’ imagination in order to solve puzzles without them being frustratingly difficult. The special abilities of each chapter are used to enhance the platforming puzzles and give them much more variety as the game progresses. Whether you’ll need to help each other out by quickly communicating which buttons to press to lift gates while sliding on a rail, or helping your buddy ride a dinosaur through an obstacle course by using a bigger dinosaur, all of the puzzles in It Takes Two are superb.

There are even a few sections in the game that allow for plenty of exploration if players wish to, although exploration is not forced so that players that just want to continue on the main path are free to do so. The first notable section to really allow players to explore is in Cuckoo Clock, where Cody and May are dropped into a big open area that can be explored with many different secrets and mini-games to be discovered, but the main path is still obvious so it doesn’t feel sprawling and confusing.

On the subject of mini-games, there is a total of 25 of these throughout the game, and they’re all very well done. They offer a brief break from the tight platforming, unique puzzles and cinematic set pieces of the rest of the game, and allow Cody and May to battle it out in some really varied mini-games which are seamlessly weaved into the environment. A great example of this is during the start of the game when May is given a hammer as her ability, and the mini-game is a sort of whack-a-mole that plays out inside a cardboard box in the actual environment itself, where Cody tries to pop up without being bashed by May’s hammer. There’s even a mini-game where Cody and May have a tank battle on a handheld gaming device that they come across. 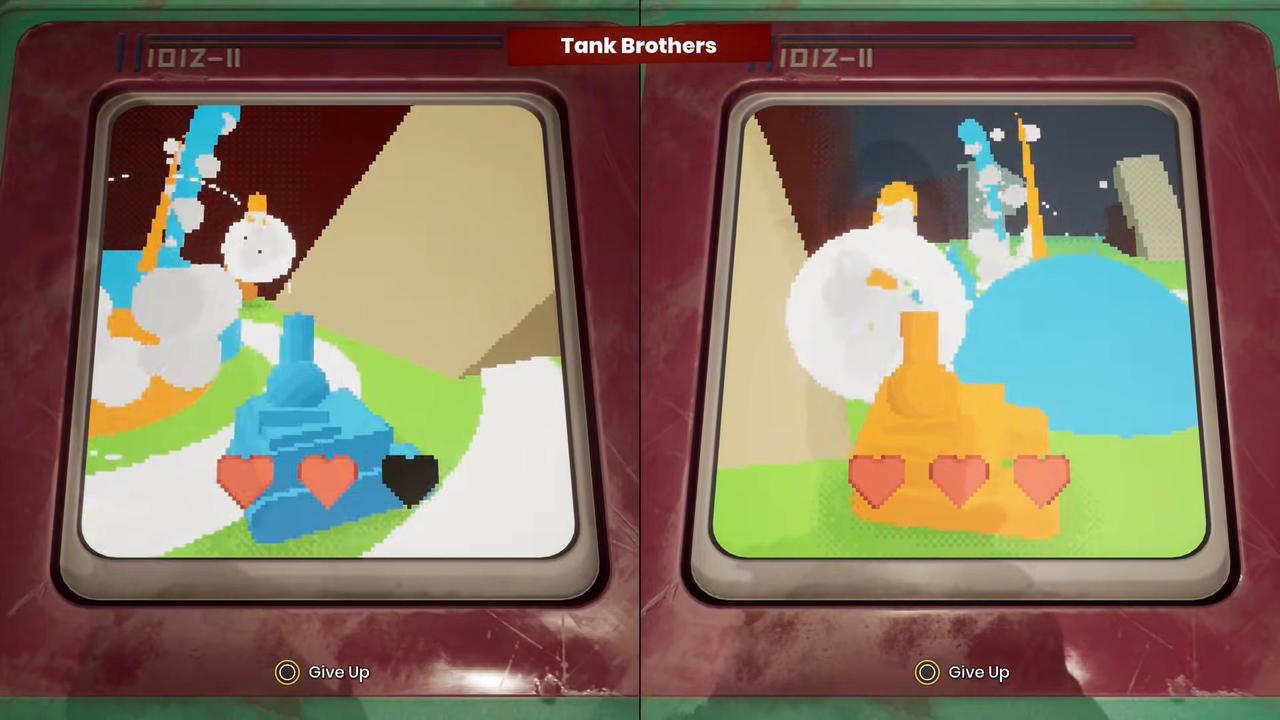 It Takes Two is quite a lengthy game for a fully co-op experience, taking players about 12-15 hours to complete depending on how much they explore or how much experience they have playing platform games before. This is extremely impressive, considering there is absolutely no back-tracking or time-wasting in the game; you can tell the developers respect players’ time and they wanted to craft an experience that is consistently fun and engaging at every moment throughout.

All of the bosses are well designed and keep players’ attention, whilst being long enough to offer plenty of challenge without being too long that they become boring, and the placement of these bosses throughout the game is truly great. The pacing is spot on; when it feels like you’ve had enough of pure platforming, the game hits you with a cinematic spectacle or a new mechanic to keep the players engaged.

In fact, my only gripe with It Takes Two is that the difficulty curve spikes really early on – some of the toughest bosses are also some of the first, however this is not really a big problem, especially if you’ve played a lot of games before, and I’m just nit-picking at this point because there truly is nothing else wrong with the game. Perhaps the fact that it doesn’t support crossplay, but it does allow for cross-generation play so this isn’t too much of a problem.

It’s quite clear that Hazelight Studios took inspiration from all types of gaming, new and old, while adding their own fresh ideas to create something special. There are plenty of secrets and Easter Eggs to discover from various different games that will be sure to surprise you if you happen upon them; although they generally coincide with the actual gameplay, they’re not just ‘collectibles’ that need to be tracked down. I won’t spoil any of these as the wonder comes from discovering them for yourself, but no matter what your favorite games are, there is sure to be something that will put a smile on your face.

All of the sections in each chapter can be accessed using the menu if you wish to replay any of them, along with the mini-games that you have discovered during your playthrough. In terms of the replay value, the game mechanics would be changed up completely by playing the game again and selecting the other character, as Cody and May each get different special abilities throughout the game. There are not many games I’ve played in recent memory that once I reach the end credits, all I want to do is go back and play the entire game again, and It Takes Two is now one of them.

It Takes Two is co-op gaming at its most joyous and whimsical, and will forever be in the hearts of anyone that is lucky enough to play it. It will go down as one of the finest co-op experiences you could possibly have in a video game; every second of the game is incredibly fun with awe-inspiring environments. It Takes Two is a sheer joy to play, and is something that every gamer needs to witness for themselves.