Be excellent to each other! 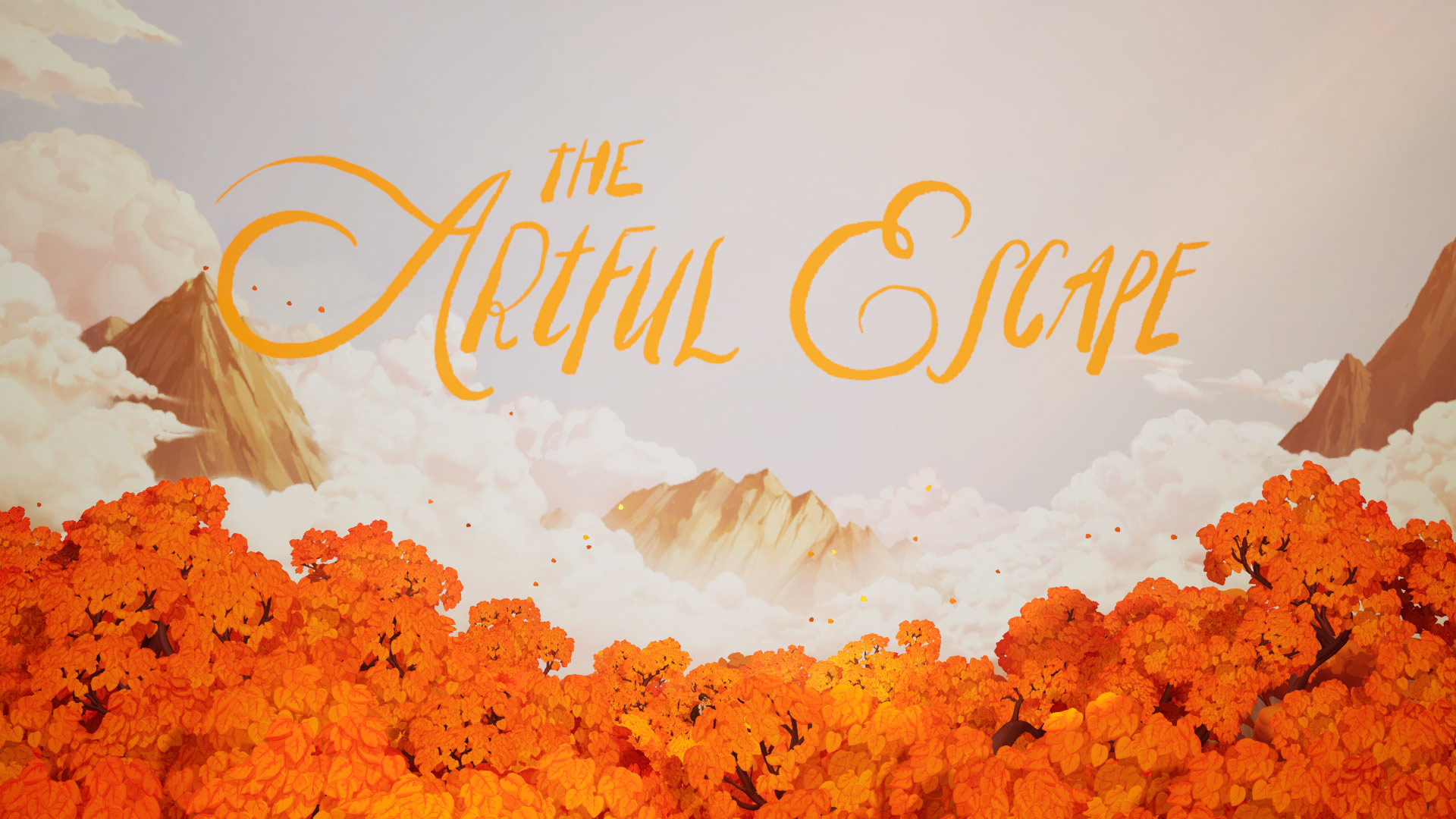 The Artful Escape is a musical narrative adventure game published by Annapurna Interactive and developed by Beethoven & Dinosaur. Annapurna is known for publishing narrative-focused and more experimental titles such as What Remains of Edith Finch as well as Outer Wilds respectively. This game marks the debut for Beethoven & Dinosaur and manages to live up to the legacy that Annapurna has built so far. 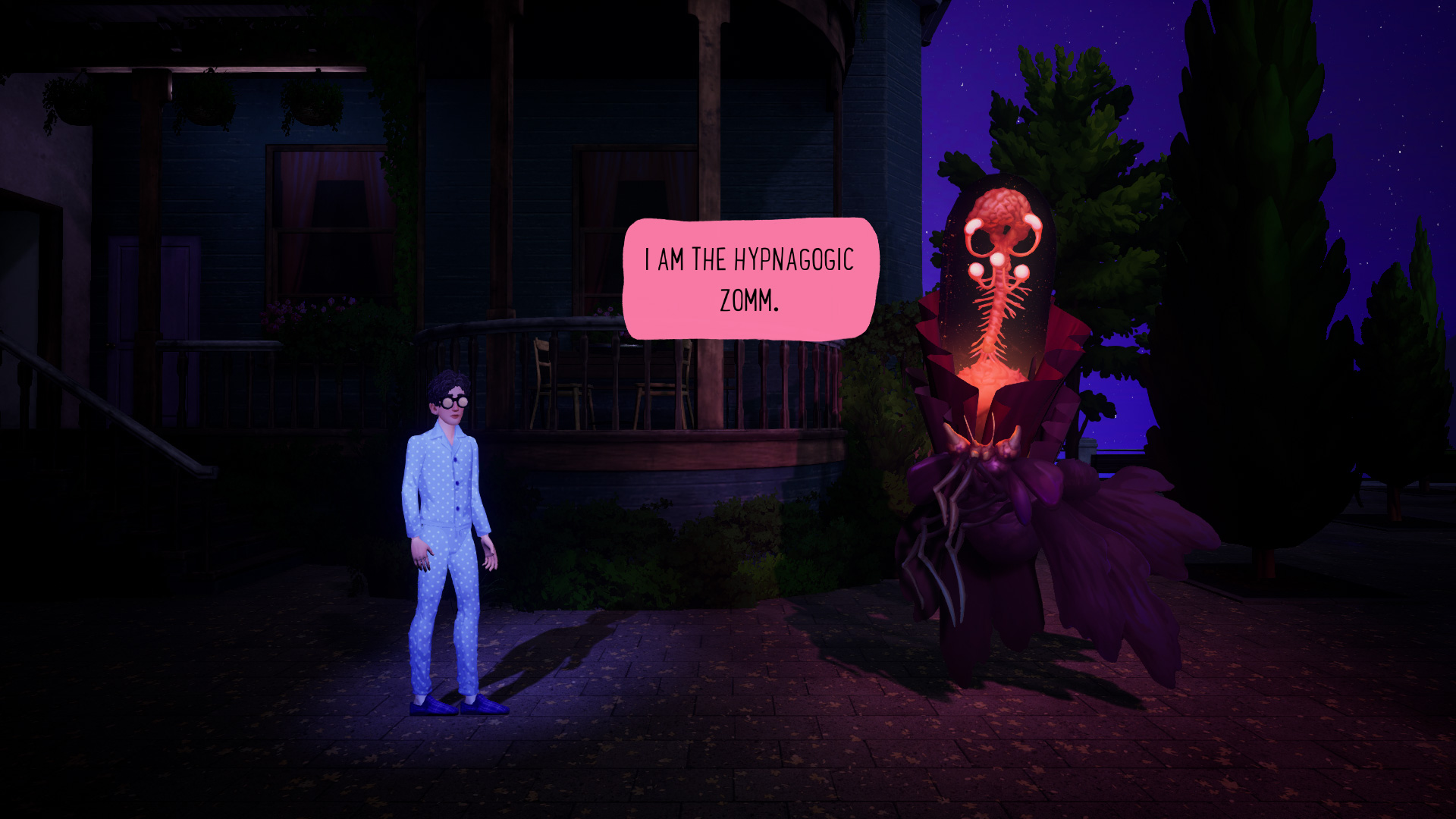 The Artful Escape puts players into the shoes of a young guitar player named Francis Vendetti. Francis seems destined to live in the rather large shadow of his uncle Johnson Vendetti who has become a folk music legend of sorts. As the story opens, Francis finds himself unable to shake a nagging feeling as he struggles to strum a few bars of folk music. It’s clear that Francis would rather play some sick space opera rock jams but is being forced to instead cover his uncle’s folk songs at the upcoming festival in his honor. The day before the festival, after being suitably beaten down and discouraged by the other townsfolk, Francis tries to get some sleep but is awoken by an odd sound outside. After investigating, he meets the literally out-of-this-world creature Zomm who whisks him away on an intergalactic jam session. Francis is given some new threads, a holographic electric guitar, and is now being forced to play support for an epic-level guitarist named Lightman. Needless to say, things get real weird, real fast.

The Artful Escape is primarily narrative-driven so the story is its meat and potatoes. It’s clear from the start there are multiple themes the developers want to play with, but only one that it really wants to drive home. From feeling insufficient when comparing himself to his uncle to gaining enough courage to play for an entire galaxy, it’s clear the game is focused on freedom of expression. This freedom is slowly unveiled through the narrative as multiple characters often ask “Where are you going?” to which Francis often replies with a concrete answer when the question is more metaphysical in nature. This theme is further driven home with a surprising focus on player freedom. 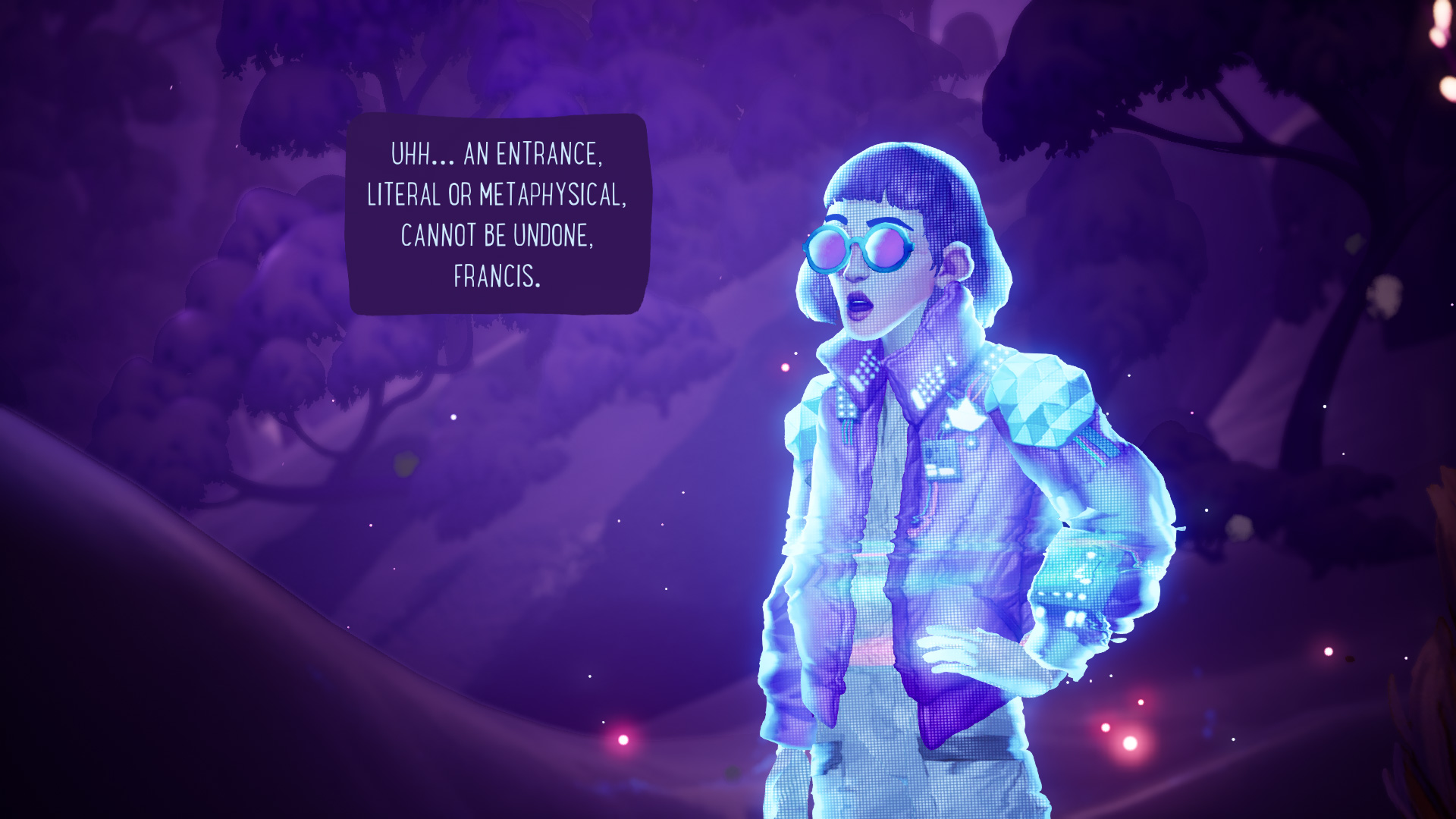 While the narrative is fairly linear, there are parts in the game where players are allowed to express themselves by evolving Francis throughout his journey such as giving him a stage persona or customizing his look. The stage persona was particularly interesting as when it’s introduced, it feels like the game is trying to get players to lie to lead them to punishment. However, once the segment ended, it’s less about punishment and more about finding out who Francis wants to become than becoming what the people around him say he should become. It’s a super refreshing message and the game handles its execution wonderfully.

While the story is extremely strong and there are some tear-jerking moments, it’s elevated further by mostly excellent voice acting. The Artful Escape as a whole seems to be aiming for the feel of those classic 80s movies such as The Last Starfighter. These movies often portray a young protagonist who is not living up to their full potential that has an otherworldly force whisk them away on an adventure that teaches some important life lessons. As such the voice acting hits super well at some points but other lines feel straight out of a Saturday morning cartoon. The voice cast is pretty star-studded as well with Lena Headey (Game of Thrones) and Carl Weathers (The Mandalorian) both voicing pivotal roles. 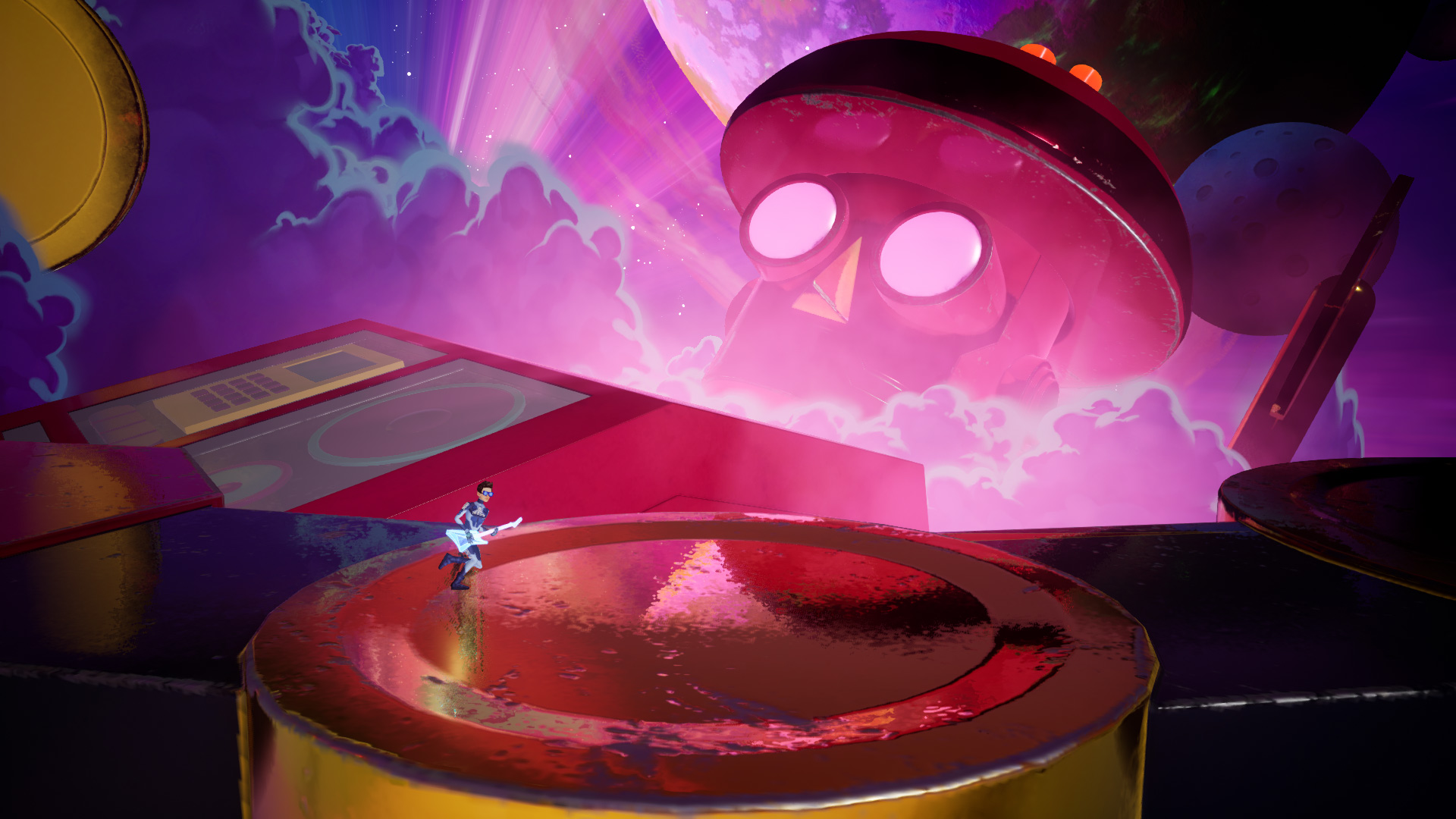 Unfortunately, the gameplay is not near as polished as the story. The game is broken into multiple chapters and each involves Francis making his way through platforming levels broken up by encounters with new far-out beings. While the alien interactions are fantastic, the platforming areas (especially early on), leave a lot to be desired. During these platforming sections, players can move left or right, jump, double jump, and strum the guitar by holding down the X button (on the controller). Some levels manage to make holding down the strum button feel rewarding as Francis plays an epic guitar riff and the environment around him comes to life. An early example is in Francis’ hometown of Calypso right after the encounter with Zomm where strumming wraps the town in Christmas lights and shoots fireworks like crazy.

However, when Francis begins exploring new planets, they’re not as fun and the platforming sections feel overly drawn out by comparison. If the strum isn’t held down, nothing actually happens. Players can still continue through the level but the base music is lackluster with a simple percussion beat in the background. So, players are encouraged by the game to hold the button down over what could be thirty seconds to a minute of nothing happening in hopes of enjoying the sights and sounds. While novel, this appears more like padding the time versus adding actual value for the player. Of note, this issue is rectified in later chapters but may turn off some players early on due to their tedium.

The boring strumming aside, there are also far better applications for the guitar that weren’t used as heavily as they could have been. As part of performances, Francis engages in what is essentially a game of Simon with whatever obstacle he’s currently trying to get past. Each obstacle has a group of five areas organically added to them that align with the face and shoulder buttons of the controller. For example, if facing a giant bear, its eyes, mouth, and ears would align with the controller buttons so when it “roars” players hit the button corresponding with it. This was an extremely fun aspect and later became a bit complicated with multiple buttons (chords) being held at once and the speed of actions increasing.

While the difficulty does scale, sticking with the theme of freedom expression, as long as players hit the correct notes in the correct order, they can do it as quickly or as slowly as they want. This can lead to some really nice sounding back and forth and makes the game more accessible as well. Now, there is no death state so if Francis falls off a level or fails at a performance, players can start over right where they were. As the story is the main draw, this decision doesn’t appear to take away from the overall enjoyment.

An Acid Trip in Game Form 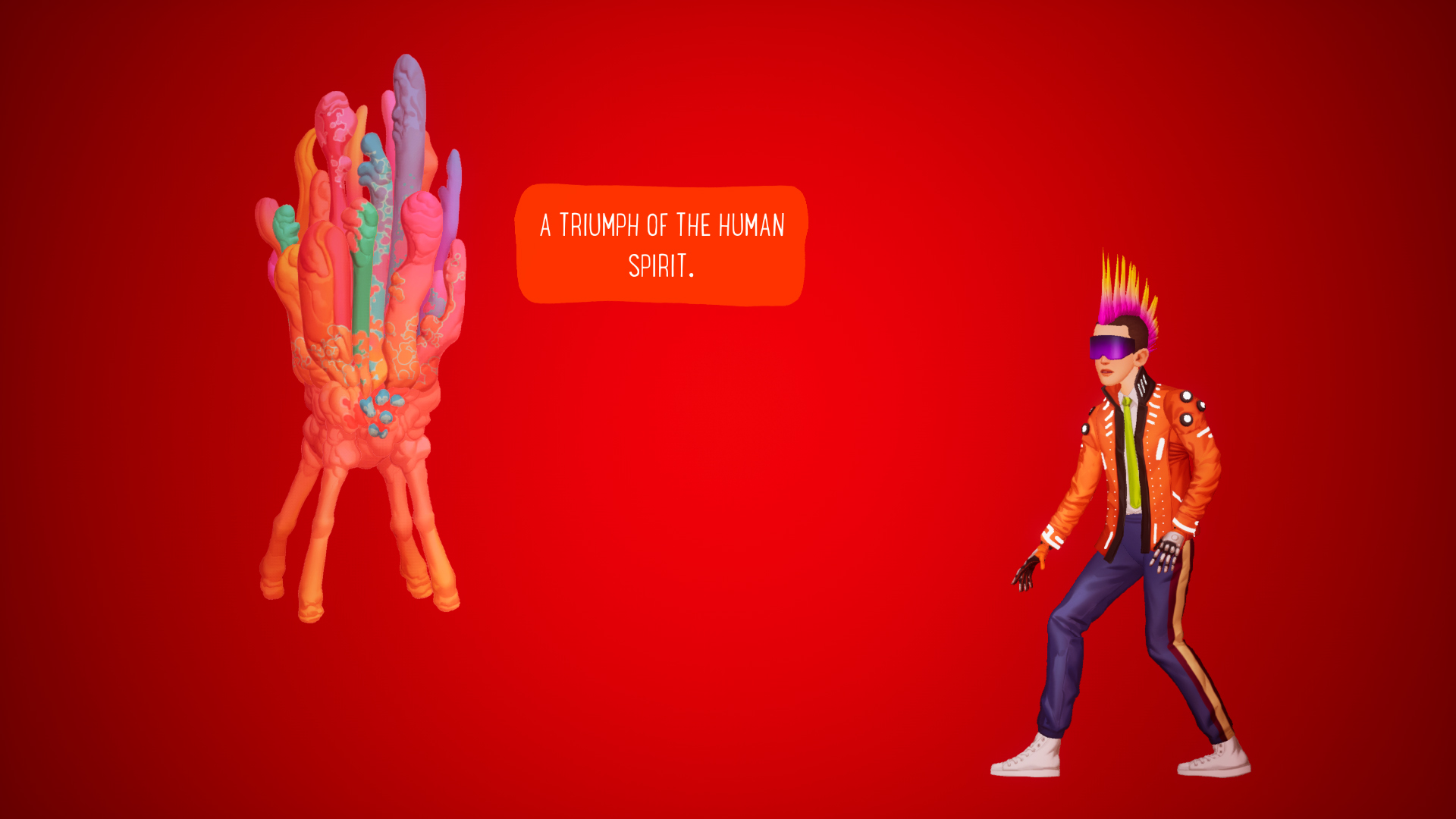 The visuals and sound in this game are a literal trip. Beings who speak in smooth jazz, gigantic space butterflies who MUST be entertained, and creatures who shake their hips to a beat that only they can hear are just a few of the striking and bizarre sights found within The Artful Escape. While not directly referenced, it’s clear inspiration was drawn from lots of 80s movies, Fear and Loathing in Las Vegas, musicians from all over, and even album cover art. Outside of the unique character designs, the polish applied to the presentation is clear and present and works oh so well. There are times where characters appear a bit gnarly, especially if focused on the stiffer than expected animations, but there are for more times where players will be in awe of the light show being put on in front of them.

It’s a game about rock and roll and thankfully no punches were pulled in that regard. During performances and while traversing through each level, pyrotechnics, fireworks, laser light shows, glowing flora, etc will excite the eyes and tickle the brain. Combined with the aforementioned psychedelic creatures and amazing sound is a universe that Bill and Ted would fit right at home in. Speaking of sound, there are some real tasty licks in here. There doesn’t appear to be any licensed music but what was on display was more than sufficient to get the heart pumping and the head nodding.

The Artful Escape provides a strong narrative adventure focused on self-discovery, identity, and expression that musicians, artists, and just about anyone can find something to relate to. While the experience stumbles a bit due to some dull platforming areas, the groovy universe Beethoven & Dinosaur have crafted is one that players should take the time to fully explore.