The latest news in the world of video games at Attack of the Fanboy
September 1st, 2022 by Diego Perez 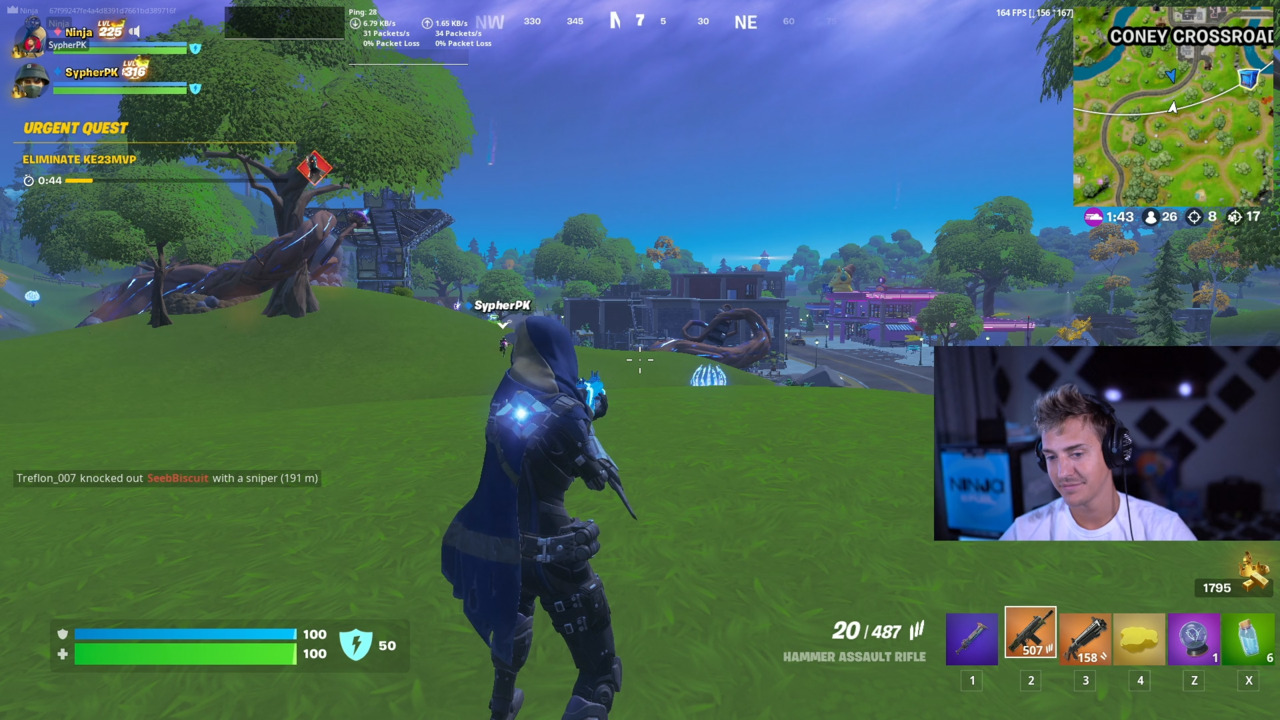 Mega-popular Fortnite streamer Tyler “Ninja” Blevins is taking a break from Twitch streaming and quitting social media platforms like Twitter after an abrupt ending to his latest stream. During a particularly rough game of Fortnite duos with fellow content creator SypherPK, Ninja left the match and closed the game before hanging up the call. Within the next minute, the stream was over and Ninja was gone.

Why is Ninja Taking a Break From Streaming?

While it may have seemed like he was just joking at first and attempting to joke his way out of a bad play, it quickly became apparent that Ninja stopped the stream because he got tilted. Playing as one of the new Destiny skins, he pushed a player using the Kamehameha Mythic and managed to land a few shots before the player used an Impact Grenade and a Rift-to-Go to escape unharmed.

Immediately after, Ninja goes silent and stops moving. He stays quiet long enough for SypherPK to ask if he’s alright, after which Ninja goes off on a tirade. “I’m f- sick of this dude. I’m sick of these players spamming Rift-to-Gos every single – I’ve had enough man.” He then shuts the game down entirely before defeatedly admitting “honestly dude . . .  I gotta take a break from streaming.”

He really meant it, too, as he was initially supposed to play with SypherPK for much longer than he did and his social media channels have been changed to reflect his absence. The most concerning bit is that he not only said “I don’t know when I’m going to be live” but also “I don’t know where I’m going to be live next.” It’s unclear what Ninja means by this, but he also reiterated the “where’ part in a tweet shortly after ending the stream.

If you missed the stream, then you may have been confused to see all of Ninja’s social media pages, including his Twitter, Facebook, and even his YouTube channel, have had their names changed to “User Not Found” and now have blank default profile pictures. Ninja isn’t just taking a break from streaming; he’s taking a break from everything.

I just need a break…I don't know when I will be back, or where

He posted the exact same message on all of his accounts, reiterating the fact that he “doesn’t know when [he] will be back, or where.” His accounts have also been updated with a new banner that reads “time out,” reflecting his indefinite break.

While it’s easy to assume that Ninja is just rage quitting because of a bad Fortnite game, there’s more to it than that. Streamers are people too and they take breaks all the time. Recently, Pokimane took a break from creating content beginning in late July before returning today with a YouTube video detailing her experience and reasoning.

Ninja is one of the biggest streamers and gaming personalities in the world. He’s constantly dealing with all sorts of harassment and that tends to wear on people. He’s also been streaming while sick lately, with a recent stream being titled “FEELING UNDER THE WEATHER I HAVE NO IDEA HOW LONG THIS STREAM WILL BE.” You can even hear him cough during the clip before he quits the match with SypherPK.

It’s unclear when or where Ninja will reappear, but it’s unlikely that he’ll abandon his community outright. Streamers take breaks. It happens, whether it be for personal reasons, DMCA takedowns, TOS violations, or other reasons.  The fact that he went so far as to update all his social accounts like he did indicates that this break will likely be longer rather than shorter, however.