All Souvenir Locations in A Plague Tale: Requiem 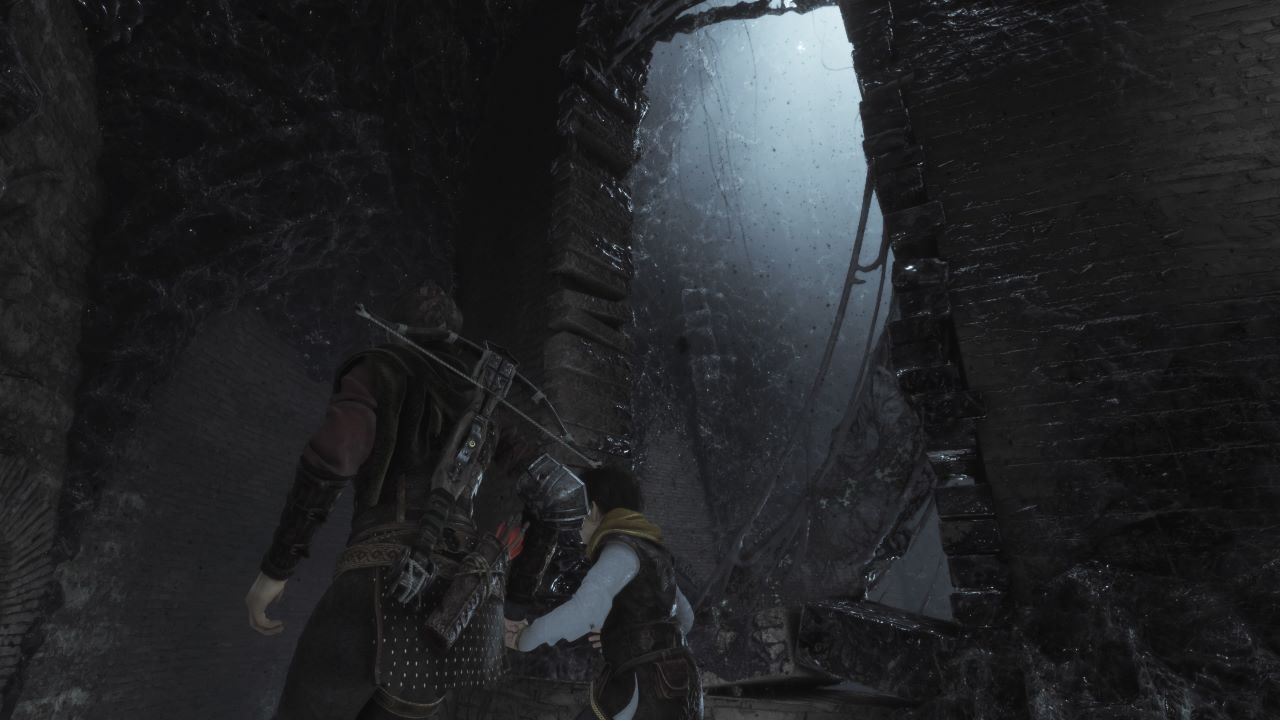 A Plague Tale: Requiem has an impressive amount of collectibles to acquire for a linear narrative game. Whether you are looking for all flower locations in the game or are instead searching for some feathers. There is always something to acquire. Souvenirs are another collectible that you’ll have to keep a lookout for due to the fact there are twenty-one of them. This article will take you through all of the souvenir locations in A Plague Tale: Requiem.

When you are at the sizeable bustling market in the city, head to the northeast of the market. There will be a stall with stacked tower blocks. This is a game that you can play as Amicia. Go up to the stall and play the game. Begin to hit the cubes and you’ll get the souvenir after the game has been completed by yourself.

Be at Peace — Chapter II, Newcomers

When in the stadium/colosseum-like area, there will be a section where you have to go up a staircase. The best way to tell you are at the correct location is there will be an archer that you have to pass. After you get past the archer section you’ll enter another area. Proceed forwards and you’ll eventually get to the staircase. You can either go to the left stairs (the correct way) or the right stairs. If you follow the right stairs up it loops around and you’ll be in a room with a lady on her final breaths. Interact with the lady and you’ll get the souvenir.

A Grave — Chapter III, A Burden of Blood

When you are in a forest area with small houses around and a workbench nearby, this is an indicator you are near the souvenir. Look on the right-hand side and you’ll notice a gate. Go behind the fence so that you are looking at the gate from its backside. Afterward, aim with your sling at the metal chain and fire. Venture inside the area and interact with the nearby grave area.

Our Home — Chapter III, A Burden of Blood

When you eventually reach the guard depot/warehouse area, you will get a chance to reacquire your sling. Once you have done so, make your way back to where you entered the depot from. Aim at the metal chain and hit it with a rock from your sling to lower a bridge. Climb up the ladder and walk across the bridge to interact with the map on the table. This will get the ‘Our Home’ souvenir. Notably, in that area, there is also a place you can work out how to open locked containers for the first time.

When you are down on the beach, continue with the main chapter progression until the point when you go in between some boxes/crates. Climb up the ladder but don’t open the hatch. Instead, continue onwards and go through the gap in the wall at the back. Push the cart and then climb up to get the Souvenir.

There will be a pier area that you will eventually reach with Lucas. This is just after you get told how to use Tar, there will be a chain for you to shoot at with your slingshot on the right side. Fire at this and then go through to the other area to start some dialogue which will unlock this souvenir for you.

The Stag’s Roar — Chapter V, In Our Wake 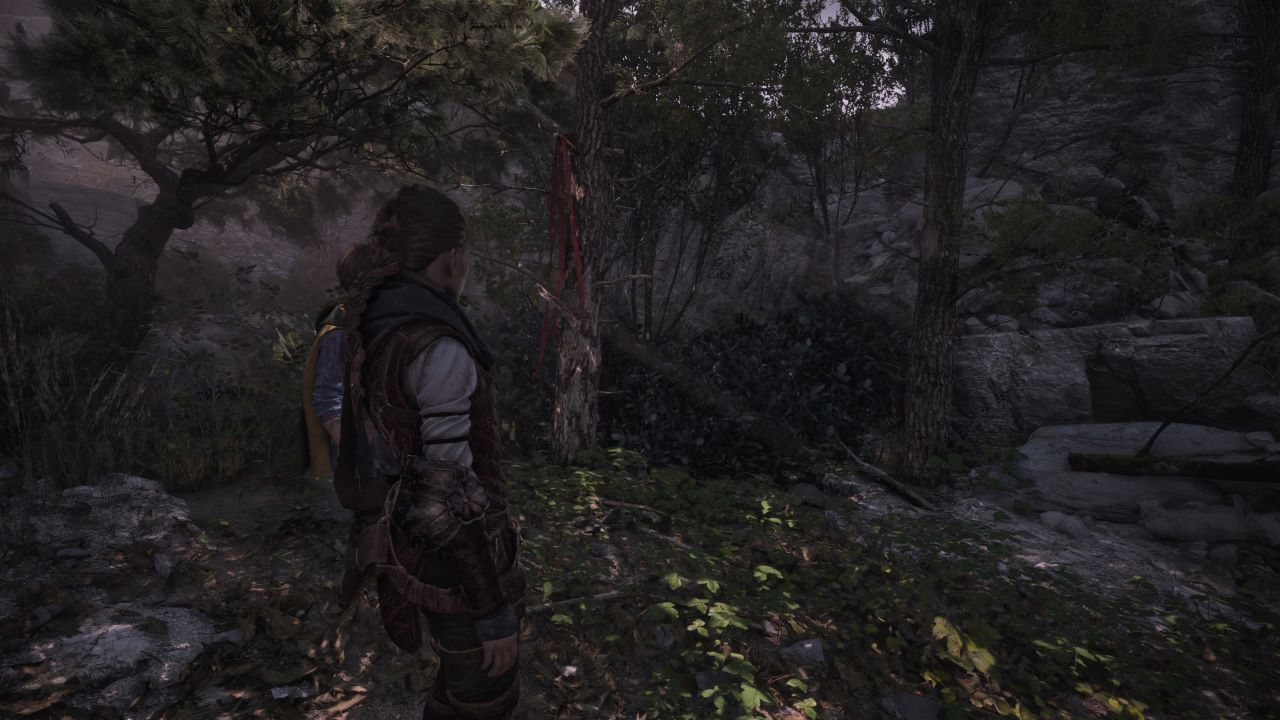 After pushing the boat back into the water at the very start of the chapter, continue up the right-hand-side trail and hug the right side when going around. Enter the area with the chest and then follow the top path up the hill. There will be some dialogue, and this will unlock the souvenir.

Huuuugoooo! — Chapter V, In Our Wake

When at the portion with the large crane-like pillars to turn around and light a path for Lucas, this is close to where you can find the souvenir. Before you go anywhere, look up at the wooden scaffolding and aim up at a metal chain to hit it with a rock. A ladder will now be there for you to climb up and you can get the souvenir at the top once Amicia shouts toward Hugo. Lucas will also climb up this ladder with you.

When making your way down to the mass gathering after the large open clearing at the start of the chapter, simply proceed through the stalls and gatherings of people. Before you head to the ruins, follow the path which will be on your left near a man standing next to a tent. Follow the path around and there will be a swing. Go up to this swing and interact with it. The souvenir will soon after unlock.

Which Colour Do you Want? — Chapter VI, Leaving all Behind

After making your way through the very first rat-infested area in the chapter, climb up the ladder that is inside the room you enter into. Crouch and move through the gap underneath the wooden planks. Jump down and a small cutscene-like dialogue will play while Hugo changes Amicia’s bandages. The souvenir will be obtained automatically. 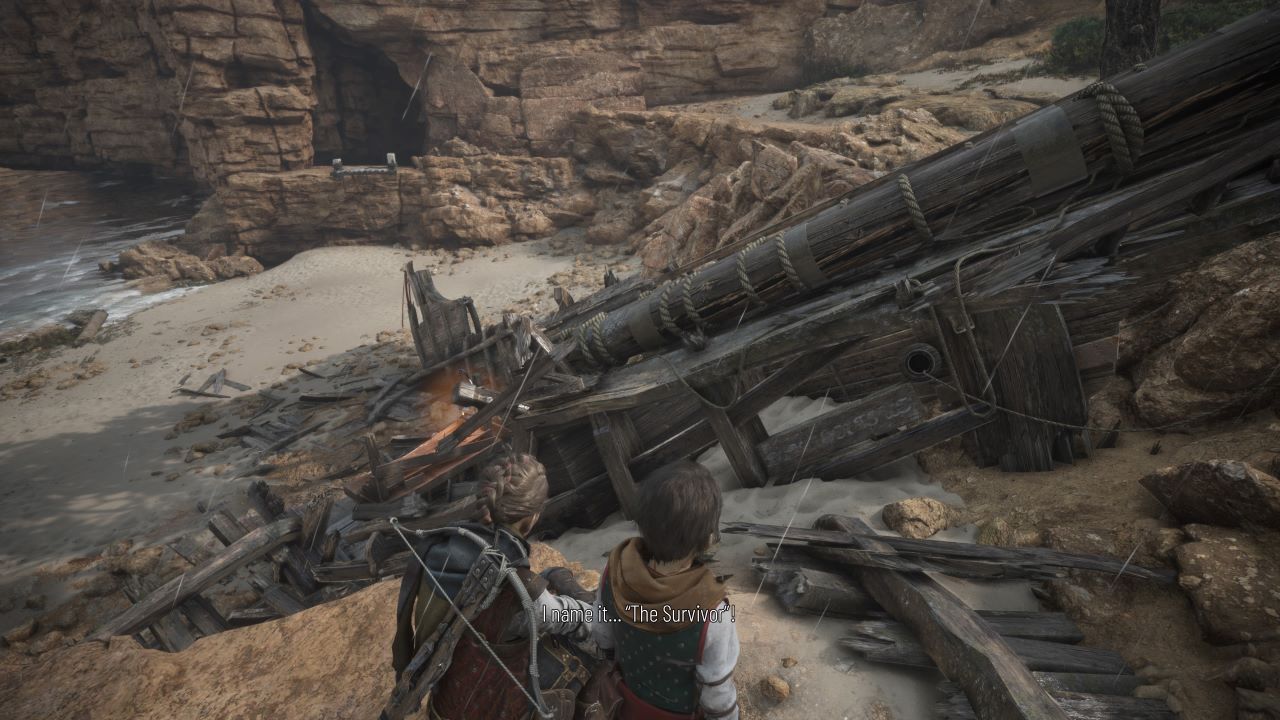 After making your way out of the cave system by lighting Arnaud’s shield on fire, proceed to the boat on your left-hand side. Go around the side of it and climb up the cliff face. Move up to the shipwreck and interact with it. Dialogue will play and you will have obtained this Souvenir.

Just after the previous souvenir, you will need to get through enemies within the shipwrecks. Once you are past the shipwreck area, you will go through a gap to get to the next location. Near here there is an area you can turn to the left instead of continuing on with the chapter. Simply climb up the ledge in that area. Take the torch and go through the cave to get the souvenir from the cave painting you’ll be able to observe within. 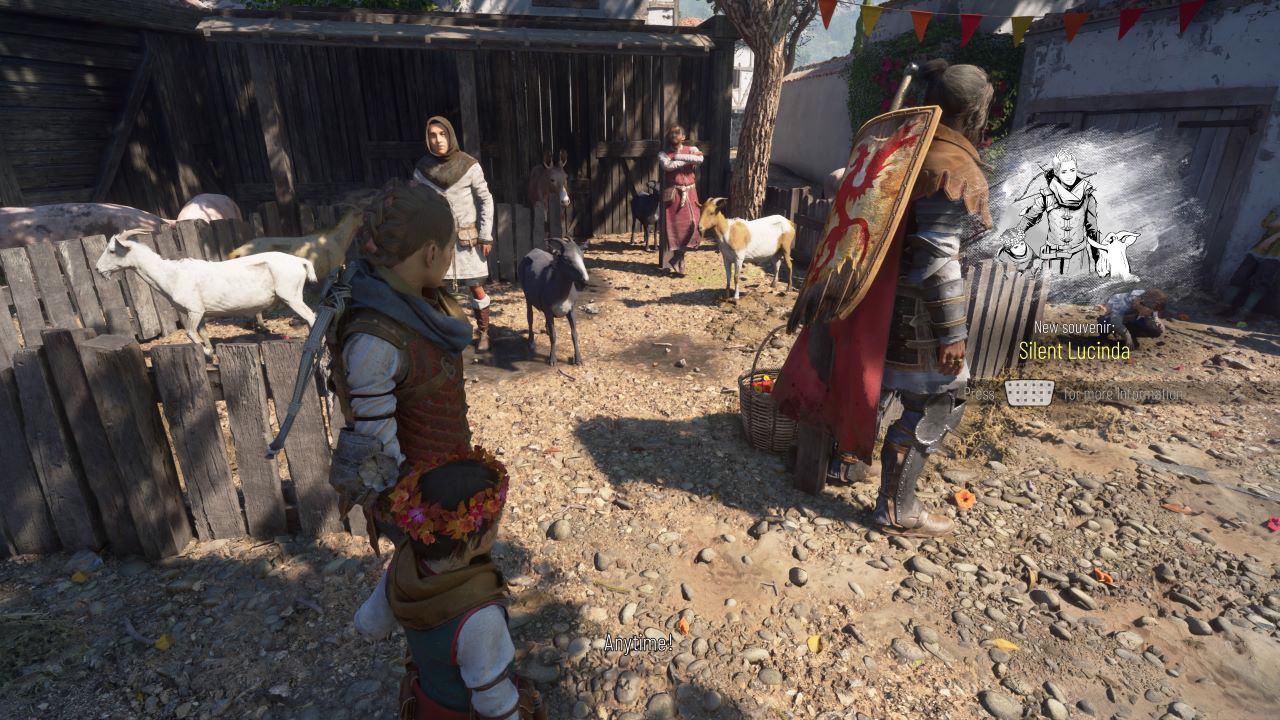 This is found at the market after leaving the ship. Go to the right-hand side of the stalls and there will be a path leading down to some pigs and goats. Hugo will run to the fence, interact with Hugo here and you will get the Souvenir. 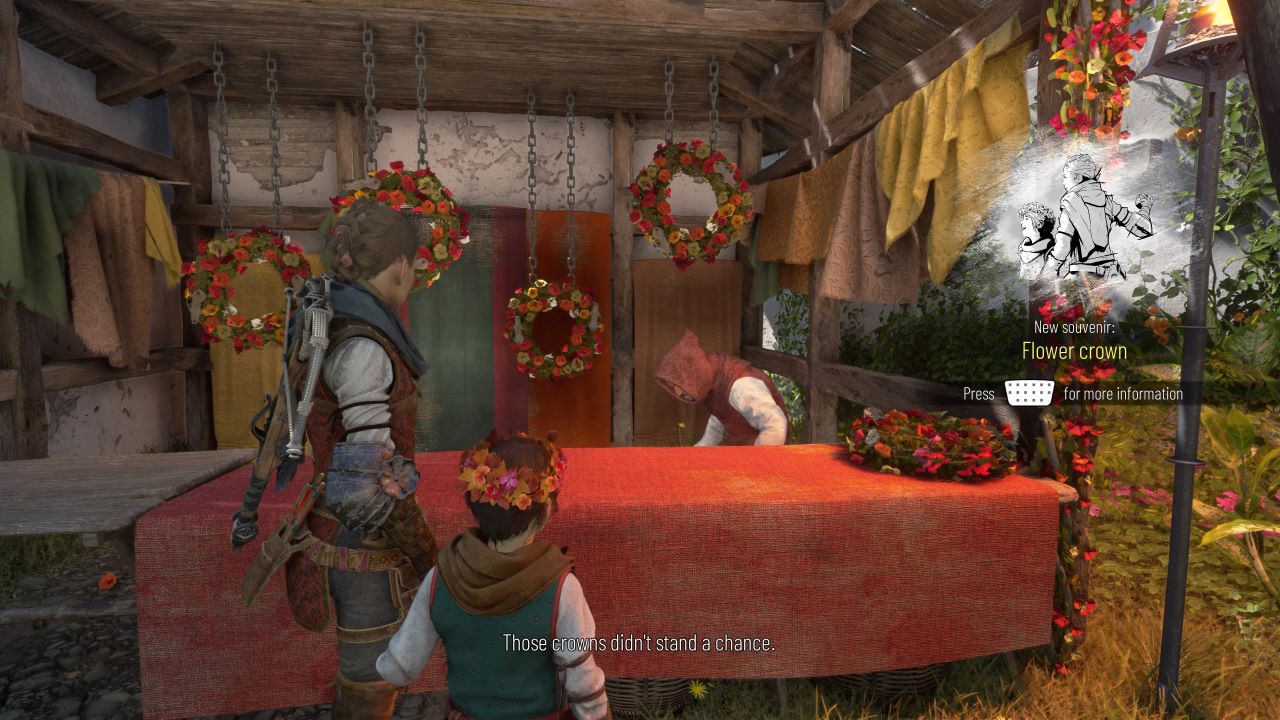 After the market, follow the stair path going up the way and turn to your left when there is an inset and a lower area. At the back will be a stall with a lot of wreaths and flowers. Go there and you will be able to take part in a game. Aim and fire the pots through the crowns and you will get this Souvenir once you have done so. 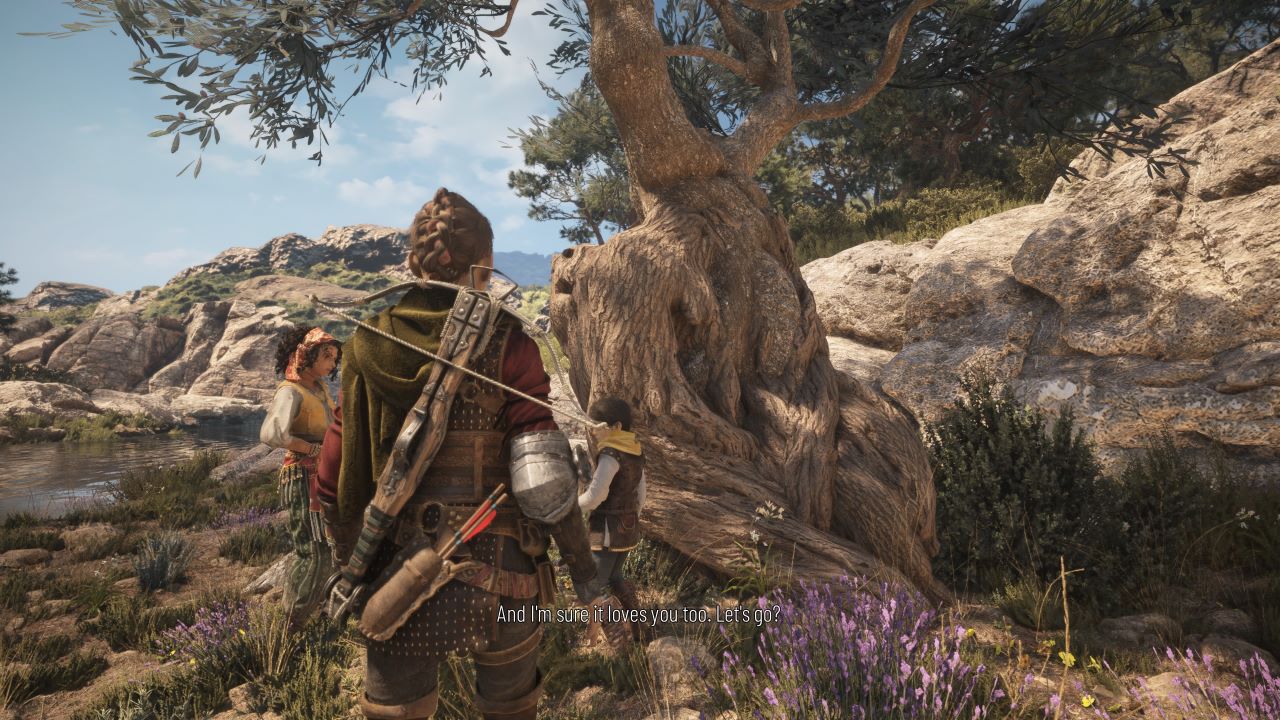 After exiting the large manor, make your way down the path to the bird statues. Upon getting to the second bird statue, continue straight along the path and do not make any turns. In other words, don’t go across the bridge. Follow the path along the bend of the river and there will be a large tree. Go up to it and interact with it for this Souvenir. 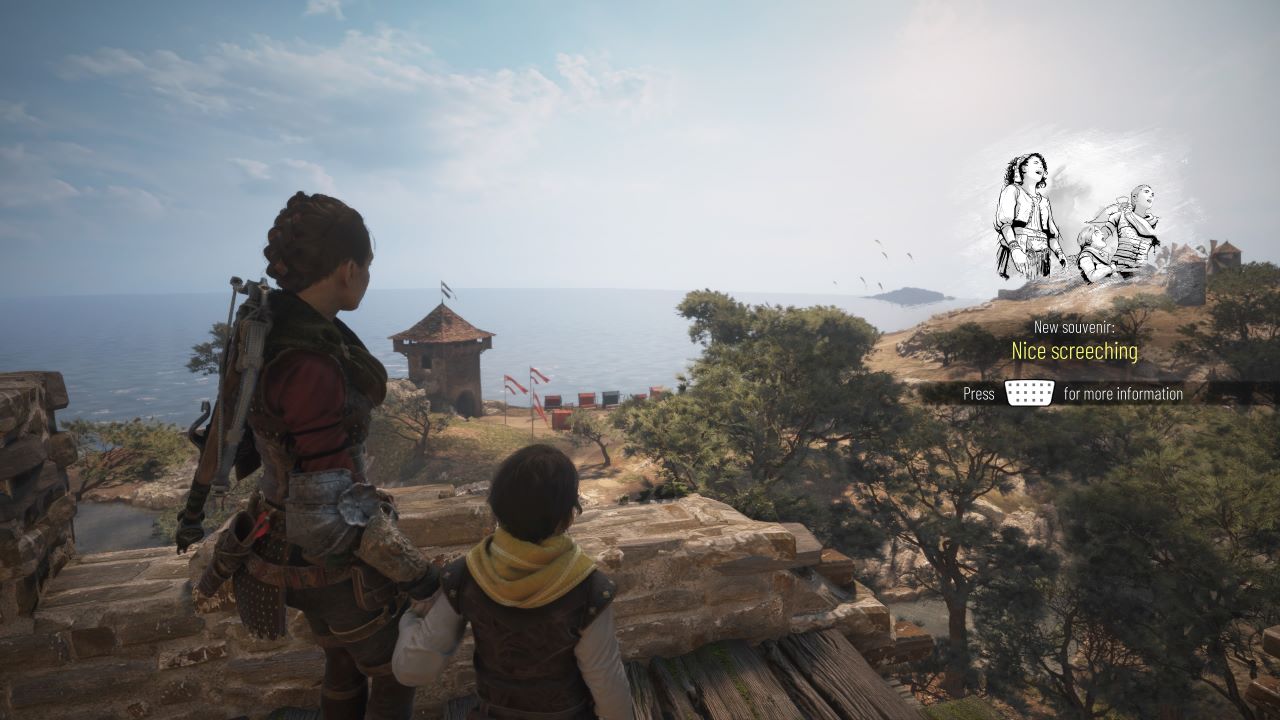 There is a tower after the section with the civilian folk gathering around the tree. The tower you are looking for is stooped atop a rock to the northwest. You will have to use your slingshot to fire and open the lock to a door through the back window of the tower. From there climb up to the top and interact at the side of the view as indicated in the picture above. 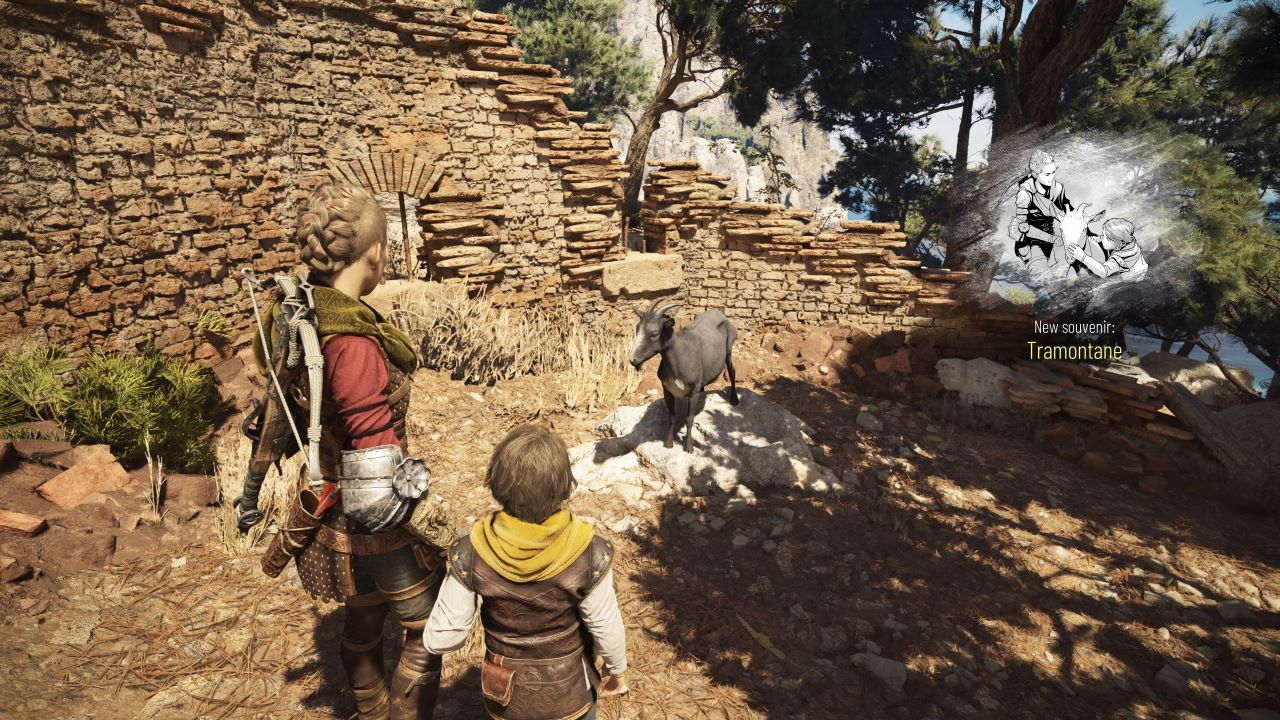 Upon starting heading up the path to the sanctuary after the loading screen. Climb up the side of the cliff on the main path and continue forwards, you’ll hear a goat inside a ruined tower. Proceed around the side and set the grass on fire with a fire pot or similar. Once it has burned away, order Hugo to crawl through the small gap and they will unlock the door. Interact with the goat and you will get the Souvenir. 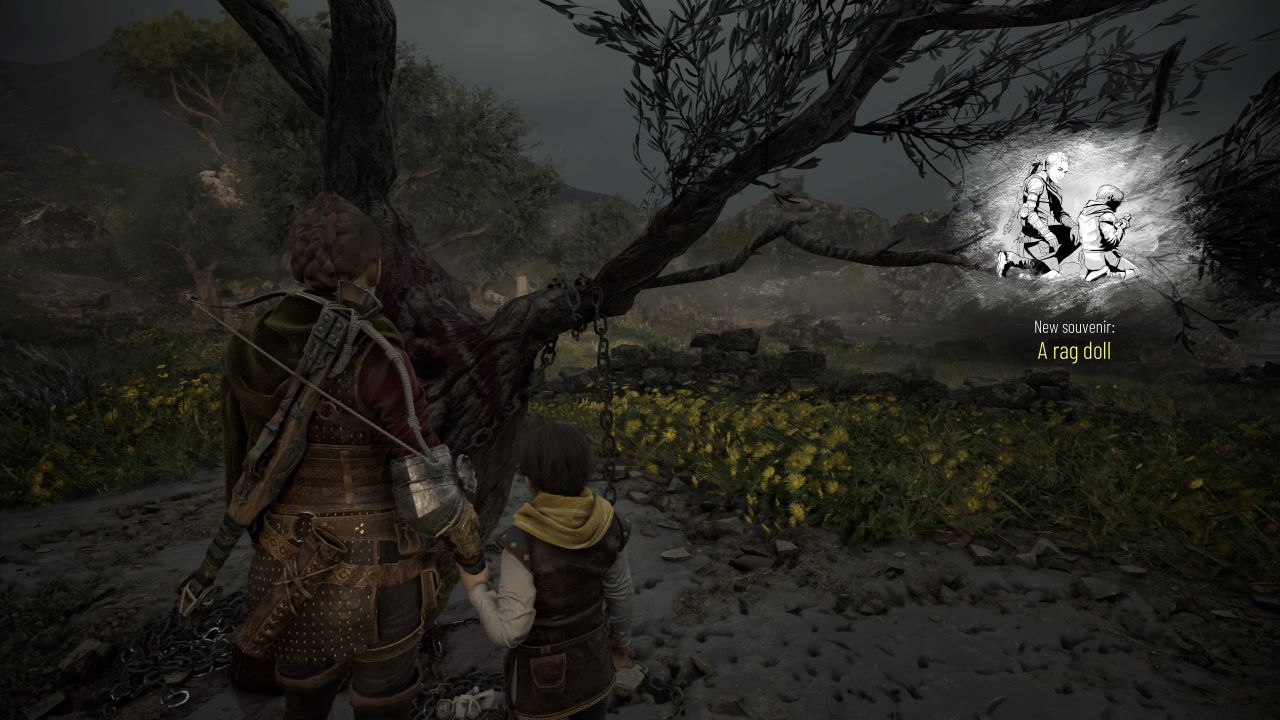 After Hugo unleashes the rats, in the next section there will be a gate with a nearby crossbow anchor point for you to pull down on the left. Aim at the gate above and then bring the gate crashing down. From there you can climb up and go to the right. There will be a tree with a rag doll nearby, let the dialogue play and you’ll get this Souvenir.

The Chateau d’Ombrage — Chapter XI, The Cradle of Centuries 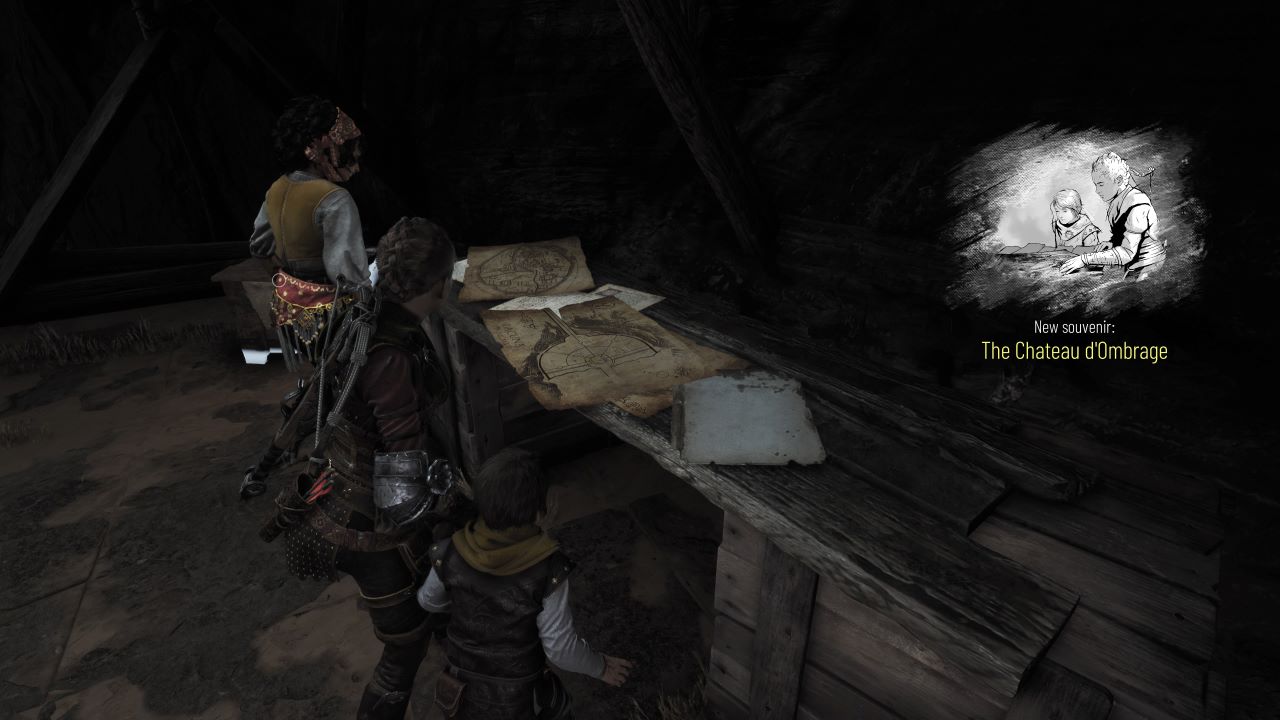 When in the massive open area with the bridge leading across the gap. Start making your way through the area with the fire carts. When at the far northeast side of the circle with one of the carts, throw tar at the fire, and then there will be an area that you can jump down to. A table will be near you which you can interact with to get this Souvenir.

His Toys… — Chapter XI, The Cradle of Centuries 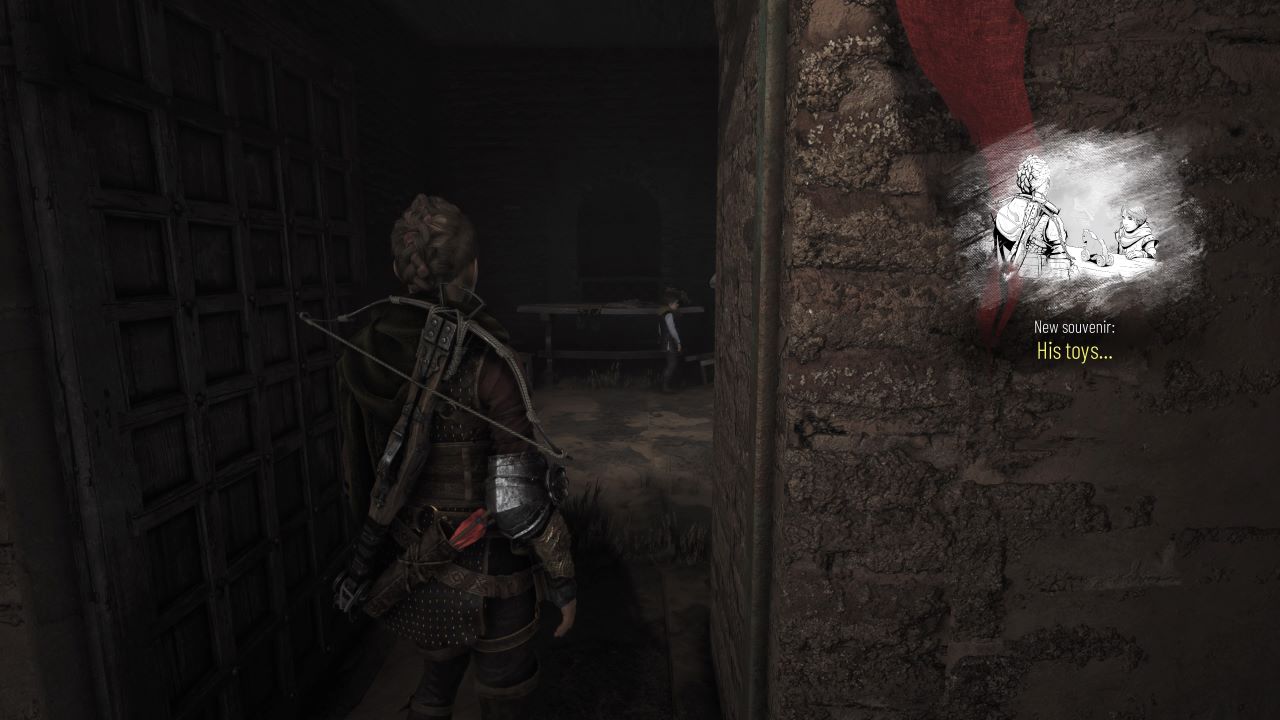 Before opening the large door secured by heavy beams, make your way to the back of the room instead on the right-hand side. There will be a small gap at the bottom of the wall which you can ask Hugo to crawl through and open the door on the other side. When the door is opened, go to the table and interact with it.

A Mess — Chapter XIII, Nothing Left

This specific Souvenir is quite close to the start of the chapter. After the first room, there will be a gap between the metal bars which you can fire your sling through to remove a metal chain on the far side. Move the cart near that door into the room you just opened. After that, you can now move the other cart easily too and there will be a place you can crouch through to then get the Souvenir on the other side of the hole you just went through.

Every souvenir has now been gathered for the game once you collected each of those. While you’re looking for those souvenirs, be sure to also collect as many ‘pieces’ as you can along the way to upgrade your equipment. Of course, you can also focus on utilizing different playstyles to unlock all of the best skills in the game.

Attack of the Fanboy / GAME GUIDES / All Souvenir Locations in A Plague Tale: Requiem