How to choose the weapon to add to your arsenal.

Not sure which weapon to pick after grinding all the way to level 30 on the Genshin Impact Battle Pass? This form of dilemma has been faced by numerous players ever since the launch of the open-world game created by Mihoyo.

Seeing as the Battle Pass refreshes with every new patch that comes out in Genshin. For players who are willing to pay a premium to get all of the items, making a decision in regards to which weapon to pick is something that happens on a monthly basis. This guide will attempt to alleviate such difficulties by ranking the weapons in accordance with their general utility and effectiveness in combat. Coming in, at last place is the 4-star battle pass bow for Genshin Impact. The Viridescent Hunt is a weapon with average numbers that have Crit Rate as its secondary stat. This might be its only saving grace considering the fact that the weapon’s passive is plagued with a myriad of problems.

The weapon passive, which is capable of generating cyclones that will draw opponents in does so only at a fifty-fifty rate, the chance to proc the passive is static and does not increase with weapon refinements. The cyclone is also minuscule in size and isn’t really all that efficient at drawing in larger enemies, which the game is slowly having an increased number of. This makes the bow a hard sell for players when there are comparable crafting alternatives that can be obtained without a monetary cost. 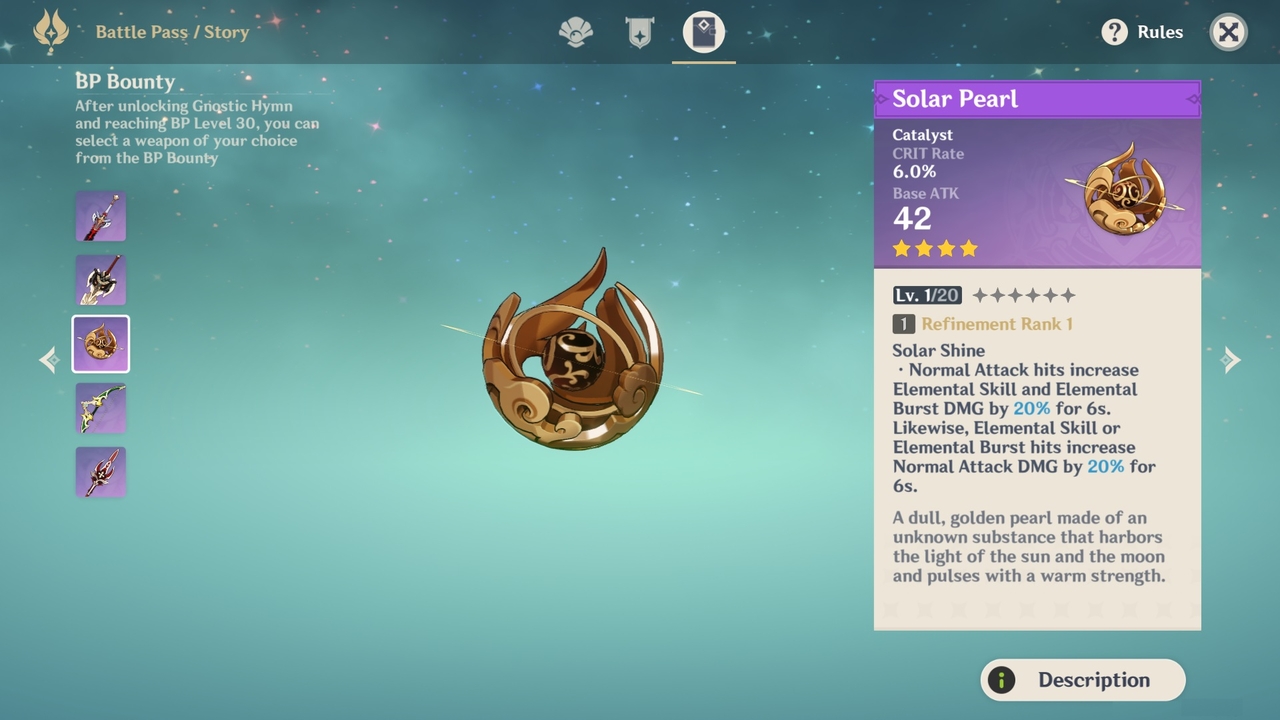 The Solar Pearl is slightly above the bottom of the barrel as the result of a more consistently triggerable passive. There is still reason to find this 4-star catalyst weapon lacking however when the entirety of its weapon passive is taken into account.

Upon hitting opponents with a normal attack, the damage for elemental skill and elemental burst is boosted and vice versa. Though the requisite for fulfilling such conditions are easy to access and boosts to elemental skill and elemental bursts are certainly preferable, as of currently the majority of catalyst users in Genshin rely heavily on using charge attacks to deal the most amount of damage possible in a combo rotation. This puts half of the weapon passive on Solar Pearl in an awkward position, where it serves more as garnish and less as an improvement on the bread and butter of a catalyst user’s kit. The Death Match with its balanced stats and weapon passive is a weapon that can be comfortably placed in the middle of the list. The weapon does not have any visible failings but doesn’t succeed to reach a higher spot up on the list as a result of its inability to provide greater, and meaningful value to an extended number of the character roster.

The weapon passive means that an attack % bonus is provided at all times, and when facing off against multiple enemies, the addition of a defense % bonus on top. Though several polearm characters have been added as of late in Genshin Impact. A considerate amount of such polearm characters does not have dividends to be gained from using Death Match, as they are either better off using a weapon that has a secondary stat that corresponds to the stat that they scale off of, or characters who doesn’t scale off of any of the stats being provided by the Death Match. 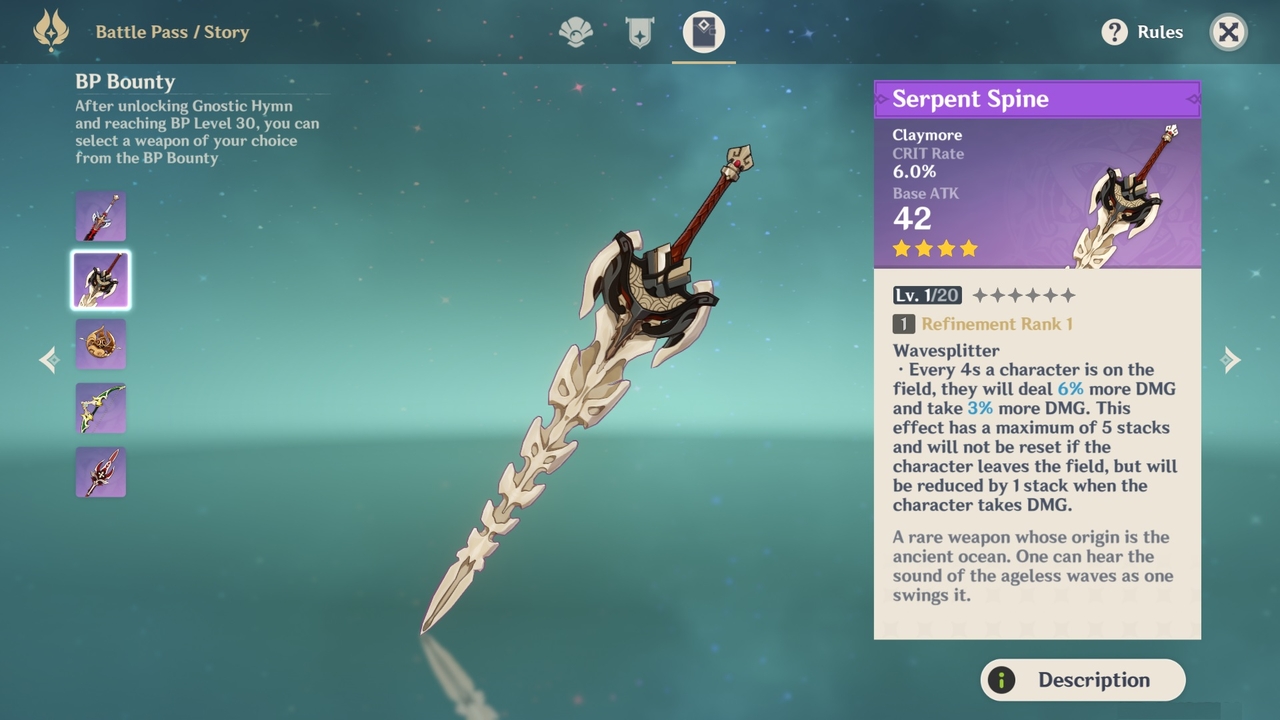 From a raw number standpoint, this claymore would arguably provide the most value out of all the battle pass weapons that are currently on offer. The reason why it isn’t placed in the number one slot is very much to do with the limiting conditions that are put in place to stop this weapon from easily reaching its maximum potential.

The player using this weapon will have to utilize shielders in their team compositions to prevent their claymore damage dealer from taking any damage whatsoever. This is difficult because it relies on players having access to a shielder that can reliably keep the damage dealer shielded at all times, someone like Zhongli for example. This limitation in conjunction with existing enemies that are capable of bypassing shields and dealing damage directly to on-field characters makes the claymore a double-edged blade that needs careful consideration before the player decides to make such an investment. At the top spot sits the Black Sword, which is a weapon that is generally considered to be the safest option to invest in. This is to do with the sword having the most rounded out stats that is synergistic with the effects that the weapon is capable of offering the character using said weapon.

The passive Justice increases the normal and charged attacks of sword users, which is an aspect of combat that most sword users would not be capable of deviating from. The following aspect of the passive can also be reliably triggered as a result of the weapon’s secondary stat being Crit Rate, which means that the weapon will add to the survivability of the damage dealer in circumstances where they can’t be covered by a shielder or a healer.

Though the weapon does somewhat fall off late-game where the healing provided by the weapon becomes trivial compared to the damage being dealt by opponents and bosses. The Black Sword is likely still the weapon that is the most consistent in value from the available selection in the Battle Pass of Genshin Impact that won’t be a bad decision on the player’s part.