These are the best ways to start off your Minecraft world.

Looking for new Minecraft seeds to test out on your new world? Minecraft is known for its procedurally generated worlds, but you can input a string of characters called a seed when setting up your new world to gain some control over what kind of world the game creates. Instead of having to look for villages, strongholds, desert temples, and all that fun stuff, you can just input a seed and have those things right near spawn! There are Minecraft seeds for every type of world, and they can give you a headstart so you can start building whatever you want. These are the best Minecraft seeds out there.

These are the best Minecraft seeds in February 2021.

Keep reading below for more information about each seed. 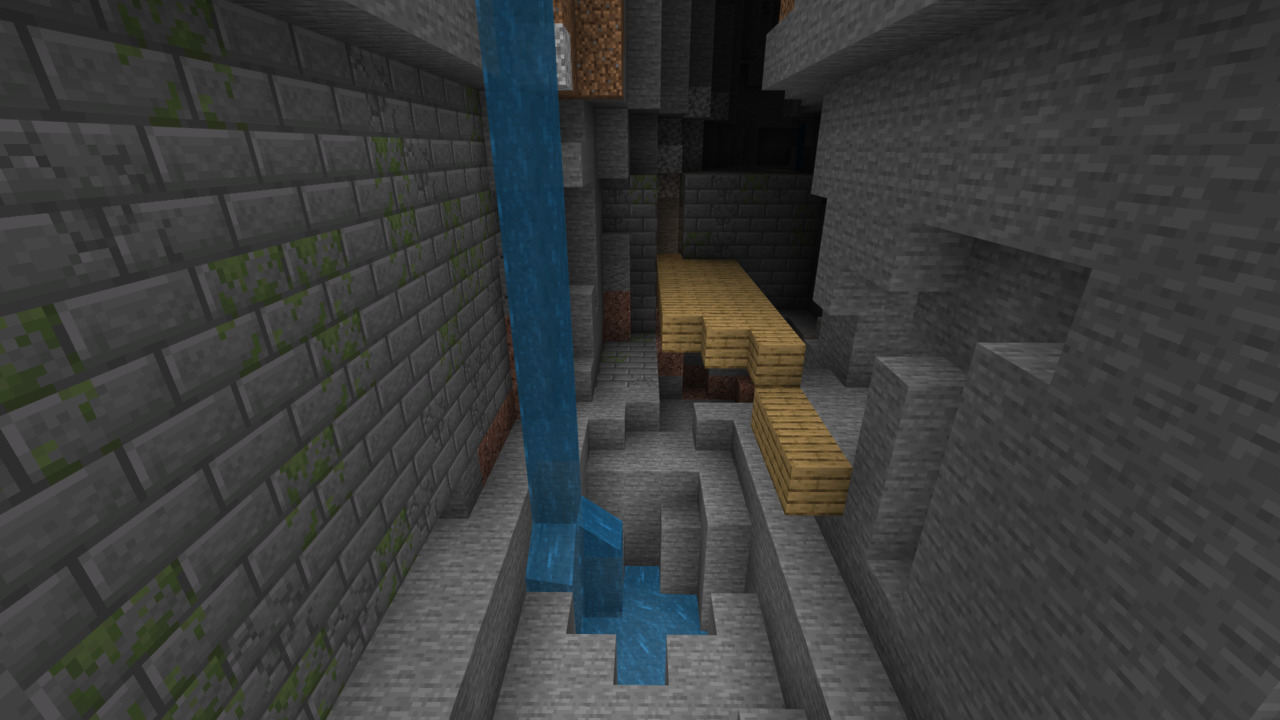 This seed starts you off right next to an abandoned village, which wouldn’t be anything special on its own, but this abandoned village has a little something hidden underneath. There’s a ravine that cuts into the village, and the bottom of this ravine contains an entrance to a stronghold.  There’s also a normal village just across the nearby plains biome, meaning you’ll also have access to plenty of crops and a bed to get you started. 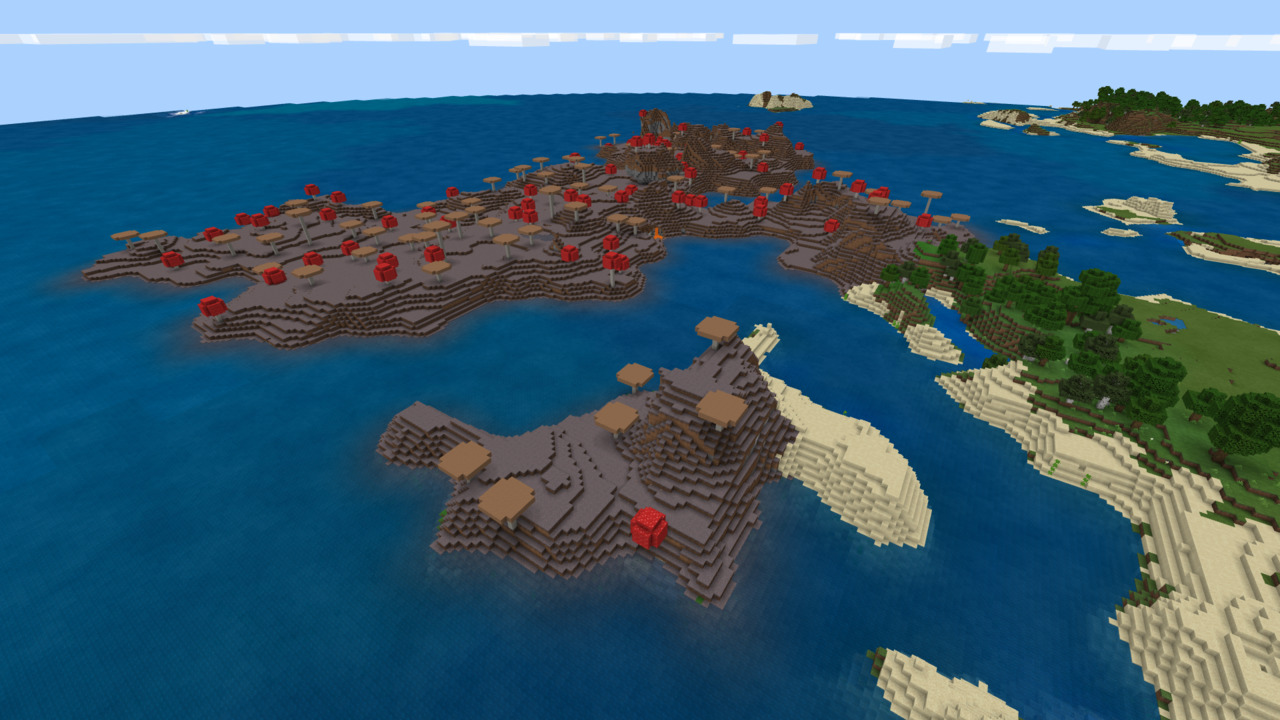 This seed spawns you right into a mushroom biome. If you’d rather build your base somewhere more ordinary, then thankfully there’s a forest biome and a plains biome just a few blocks away. Also, if you want to test your might, there’s an underwater monument just off the coast, filled with rare materials like sponges and prismarine. Just be mindful of the guardians, though. This seed spawns you just a short walk away from a village nestled in the mountains. Just head through the forest to reach it. The village’s farm actually cuts into the mountain, which is a cool aesthetic touch that makes it feel unique. Also, if you venture into the cave near the village, you’ll find a dungeon with a spider spawner if you go deep enough. This is a great seed that gives you just about everything you’d want for a permanent place to settle down close to spawn. 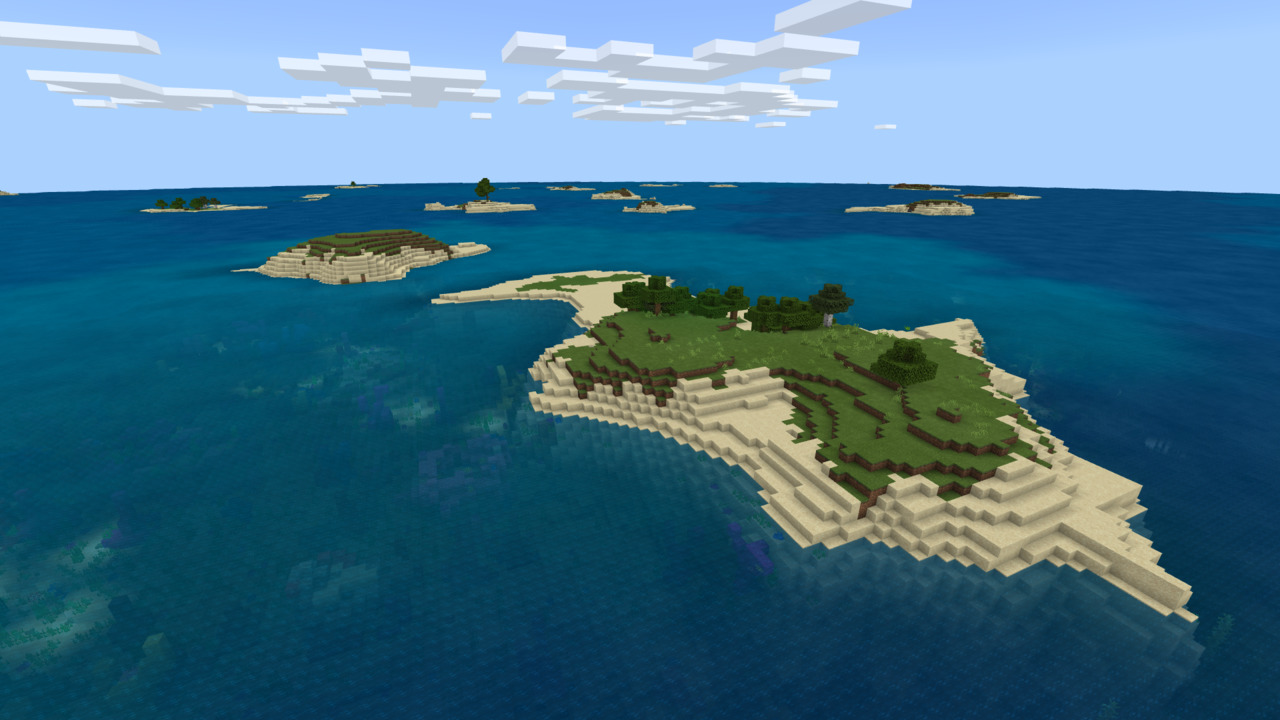 It’s just you, the sea, and some trees with this seed. You’ll spawn on a relatively large island with a small forest that should provide enough wood to build a shelter. The rest is up to you. There are a few other islands nearby, but if the archipelago lifestyle gets old, the mainland is only a short swim away. There’s a coastal village on the mainland if you’d like to do some trading, too. This seed has a village right at spawn with a pillager outpost looming over it. If you’ve never experienced a raid in Minecraft, this is a very easy way to do so. All you have to do is take down the captain of the outpost and then enter the village. Thankfully, there’s a second village just across the savanna in case the raid goes horribly wrong. Pandas can be hard to find in Minecraft sometimes, but this seed has some right at spawn. There’s a giant bamboo forest bordering a jungle biome, meaning pandas can be found pretty easily. There isn’t a predetermined location where they spawn, but you probably won’t be able to walk for more than a few seconds before encountering one. Right near spawn, you’ll find a giant village, complete with a blacksmith that has some decent materials to get you started. Once you’ve equipped yourself, you can explore the ravine that’s just outside of town. The opening is very slim, but it runs deep. There’s also a second village just across the plains biome, and the plains biome itself has tons of flat spaces that are perfect for building a home. 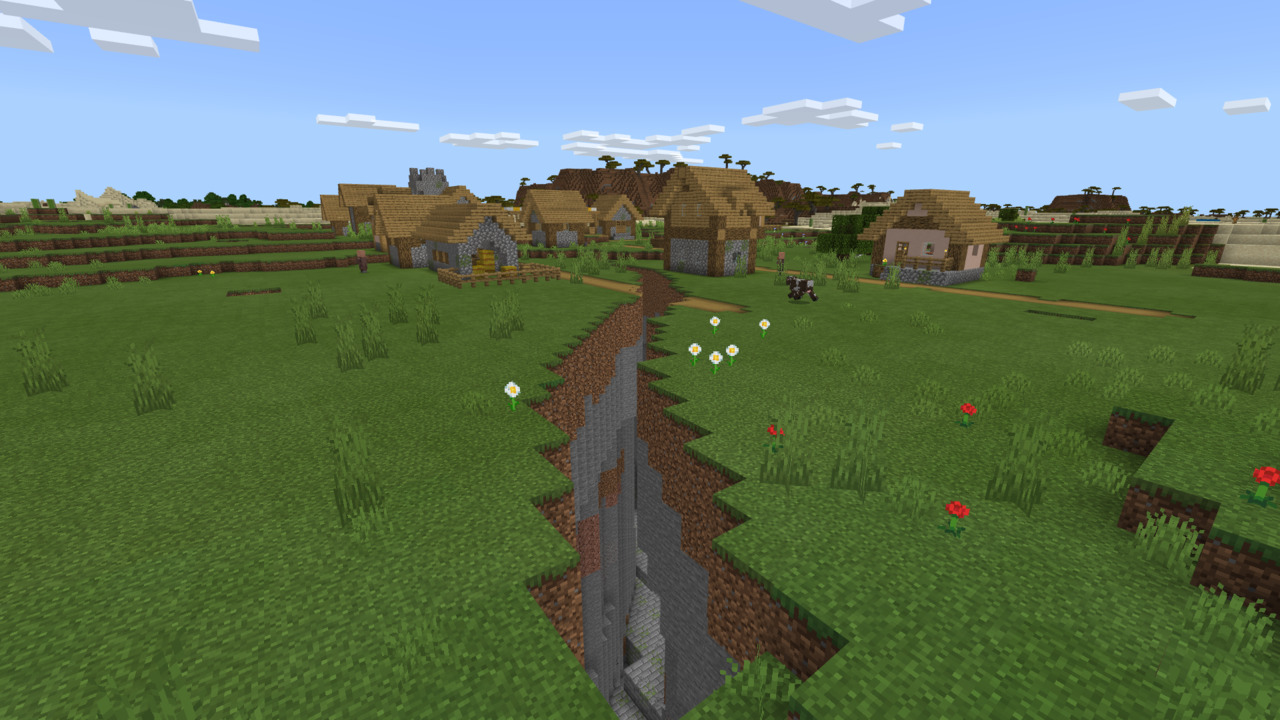 This seed has it all. You spawn right next to a village, and the village has a ravine running through it. This ravine not only has an exposed stronghold in the center of it, but also easy diamonds at the bottom. If you explore the desert biome that borders the village, you’ll come across a desert village, and if you go even further, you’ll find yet another village with a pillager outpost just a few blocks away. Finding easy diamonds in Minecraft is rare making this a popular seed to get started. This seed spawns you next to a desert pyramid, packed with rare items to get you started in your new Minecraft world. Get inside, brave the traps, and make your way out with an assortment of diamonds, gold, and other precious materials. 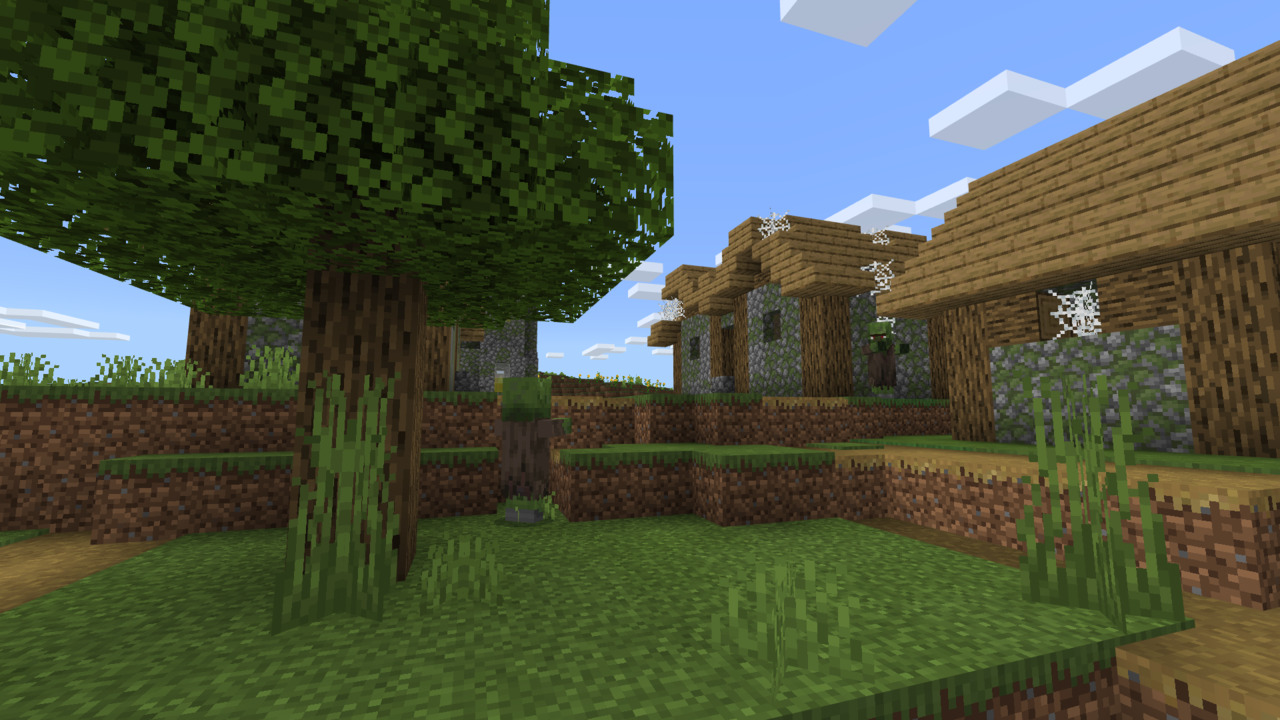 If you’re looking for something that’s more Resident Evil than Minecraft, then this is the seed for you. You’ll spawn right in the middle of a zombie village, and even if you manage to escape, there’s another village teeming with undead just across the plains. 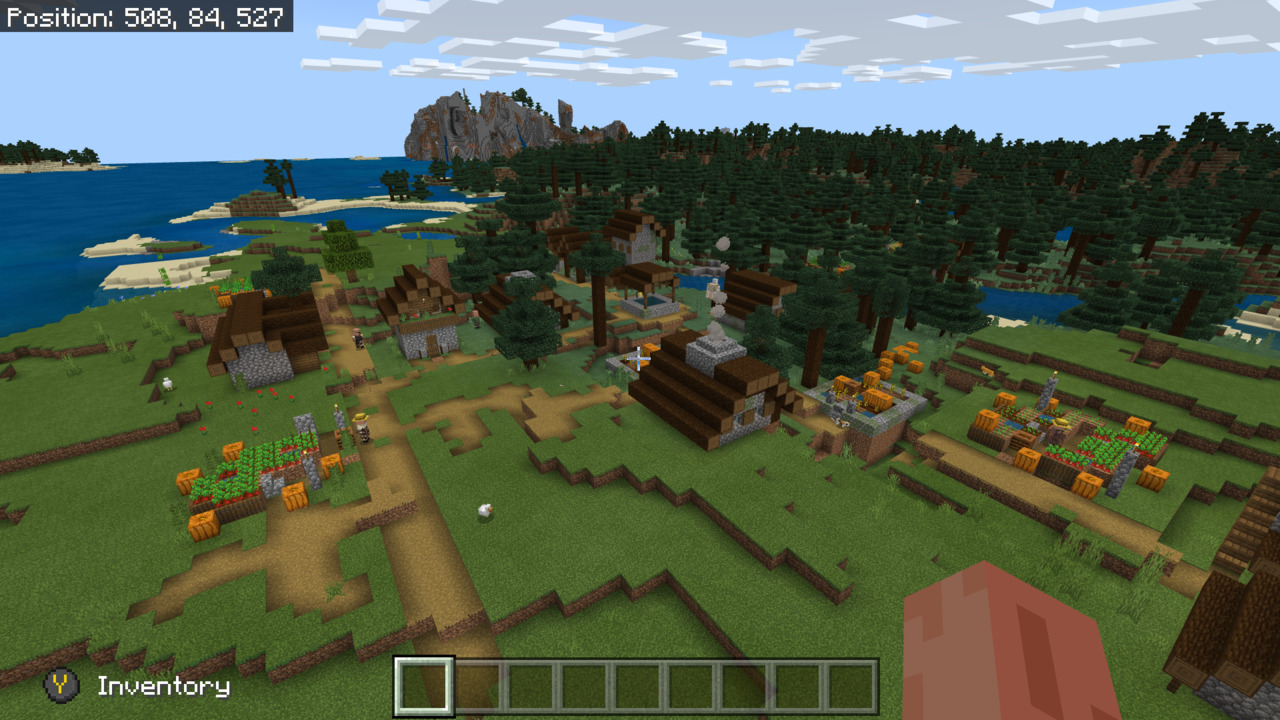 This bustling village holds a well-kept secret. Directly underneath the farms, roads, and homes of this unassuming town lies an underground stronghold, which you can access by digging straight down in the village’s well. The village isn’t quite at spawn, so you’ll have to walk a bit to find it. Don’t worry though, we’ve included coordinates to help you get there. Much like the last village on this list, you won’t find any villagers here. All that remains are zombie villagers, but you can probably guess what happened to the population considering there’s a pillager outpost right next door. Also like the last village on this list, this one houses a dark secret as well. There’s a cave that runs underneath the tree in the village’s center, and you’ll find a dungeon with a monster spawner just a short way down. 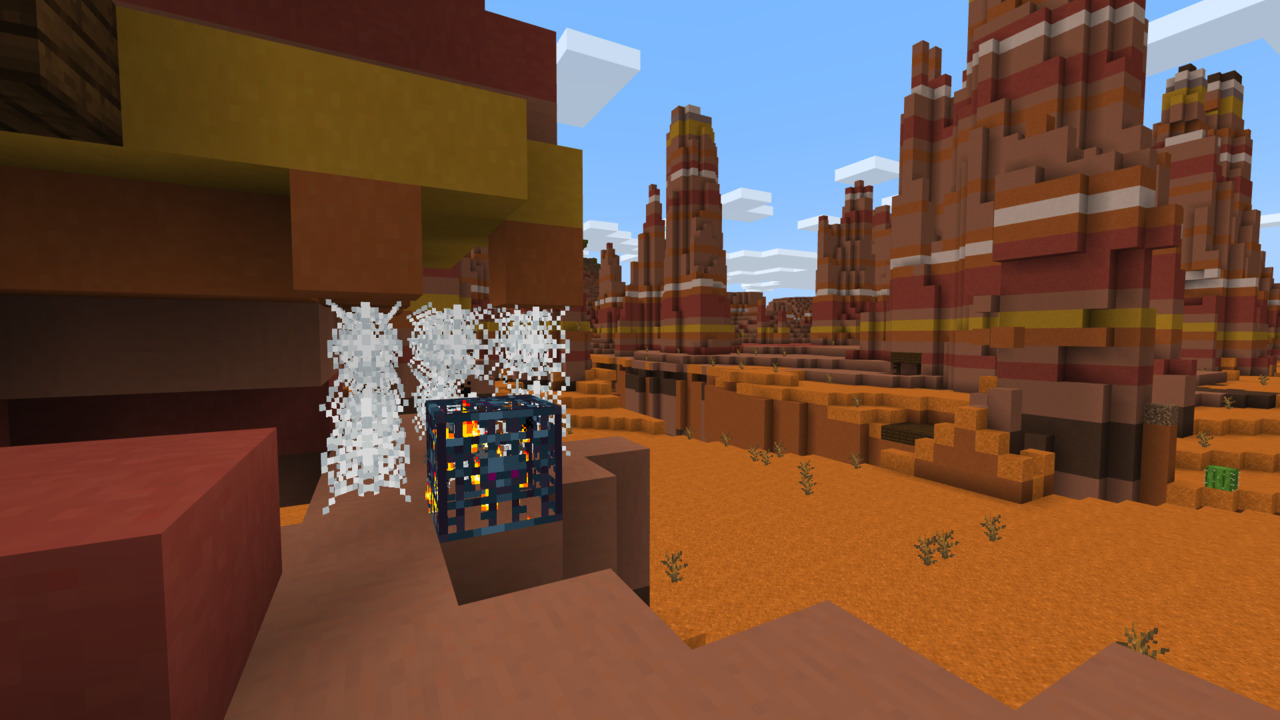 This seed spawns you just across the river from a huge badlands biome. If you make your way into the badlands, you’ll come across a mob spawner exposed on the surface. That’s not all, either. There’s also a ravine next to the spawner that houses a dungeon with yet another spawner inside. 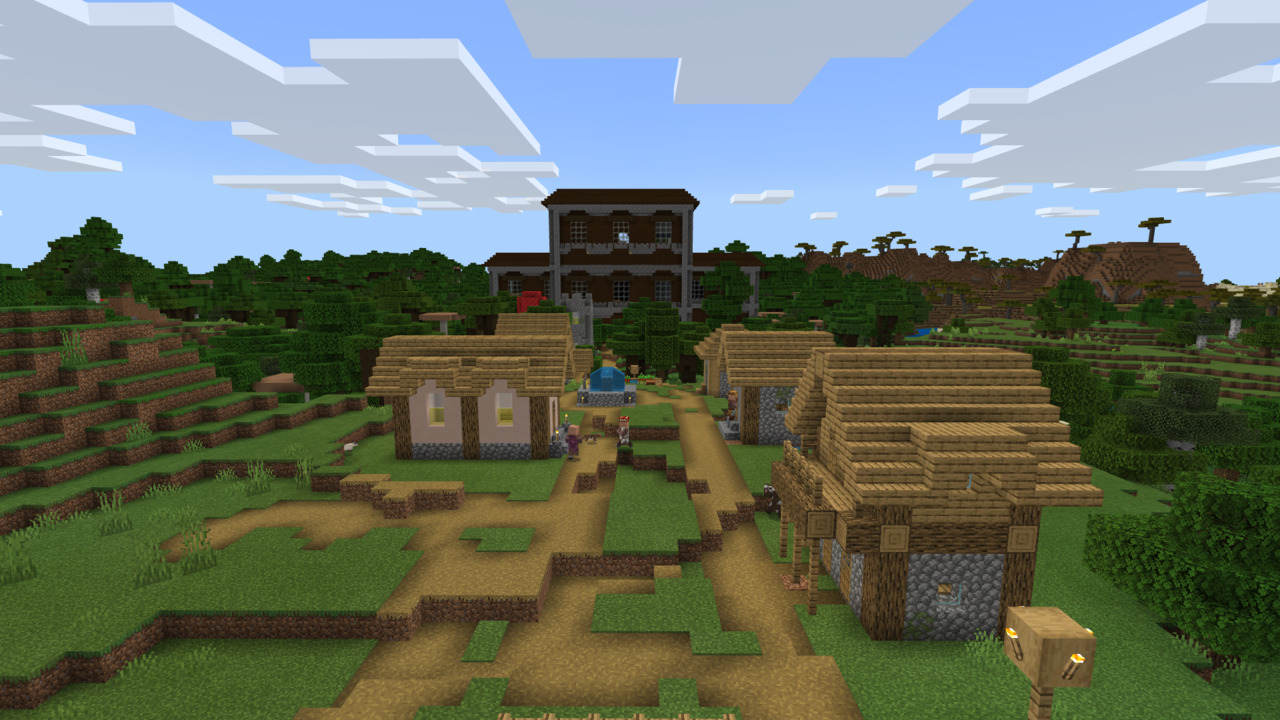 Woodland Mansion with a Village

Located a short distance from spawn, this village has a woodland mansion just outside of it, making it seem like the mansion is a part of the village itself. To get there, look for the pillager outpost when you spawn. Head past it and you should come across the village in no time. Woodland mansions can contain rare items and materials, so head in there once you’ve gotten some basic gear and see what you can find. Abandoned Mineshaft Next to Village

Like most other seeds on this list, this one has a village right at spawn, but what separates this seed from the others is an exposed mineshaft nearby. If you make your way to the desert biome a few blocks away from the village, you’ll come across a ravine with multiple waterfalls, some lava pits, and an abandoned mineshaft running through it. The mineshaft even has a few chests strewn about with rare items and materials, making it absolutely worth the trek into the depths.