Best Weapons for PVP in Splatoon 3

Use new and old weapons to their fullest capabilities! 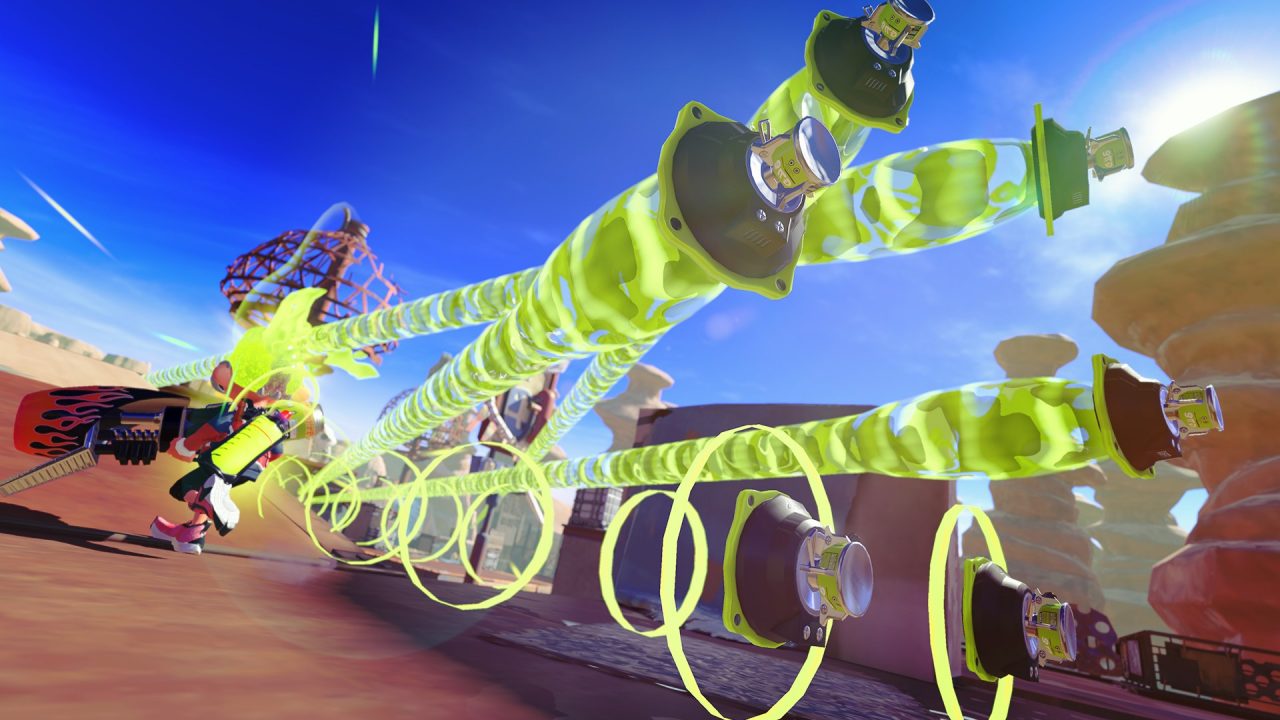 Fans of the beloved squid-kid franchise will be able to put their skills to the test with new weapons and abilities in Splatoon 3. Numerous options are offered by the game, from cosmetic choices like playing as an Inkling or Octoling to technical tweaks like toggling motion controls. These choices extend to weapons, and while many of them might feel familiar, there are plenty of new changes players can take advantage of. Even the Splatfest World Premiere demo has a vast array of weapon choices, including the new Tri-Stringer and Splatana Wiper. Players looking to get an edge – especially in the Splatfest demo – will need to pay attention to the best weapons for PVP in Splatoon 3.

Which Splatoon 3 Weapons are the Best for PVP?

The Splatfest demo offers 26 weapons. While the full game and its future updates will likely introduce more, the best weapons here will definitely prove to be extremely useful in online play. Because of new specials and weapon types, you should consider weapons that bring the most unique and effective playstyles to the table. Some are trickier to use than others, so a weapon that’s incredibly powerful in the hands of a skilled player can be somewhat useless at lower skill levels. Take note of these facts when looking at which weapons can truly be labelled as “the best” for PVP! 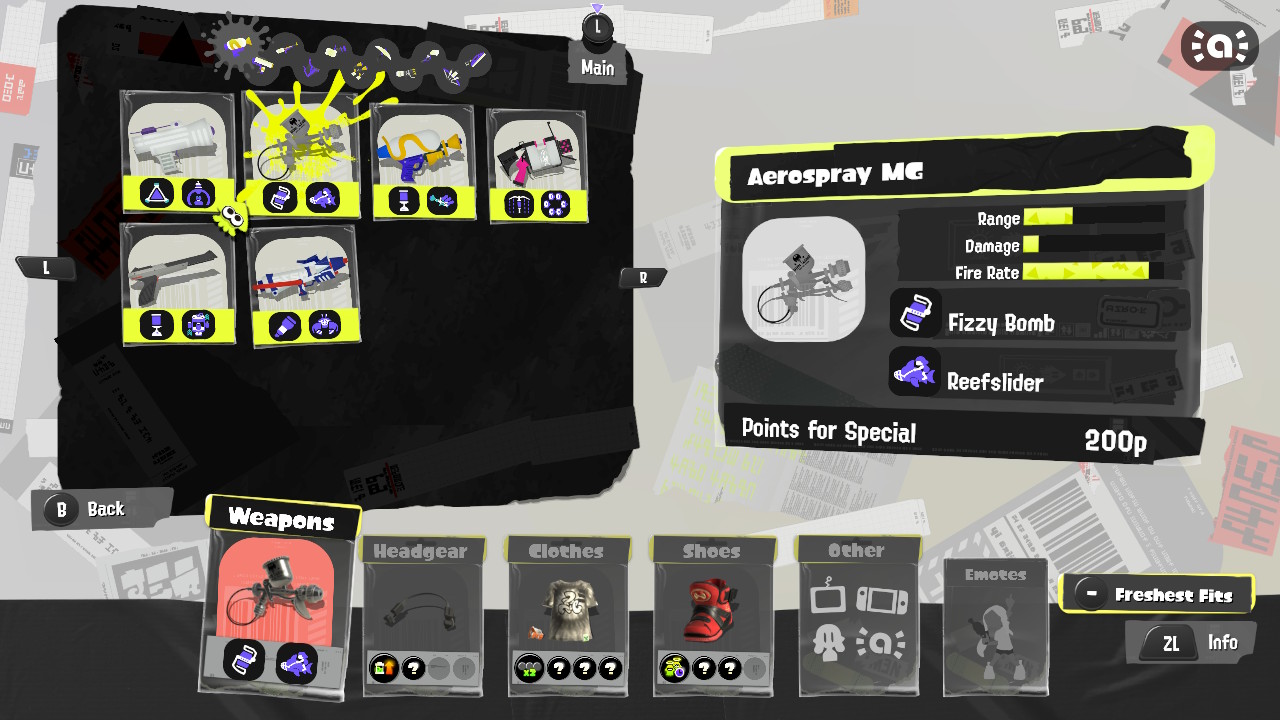 The Aerospray MG is a weapon with great potential. The high fire rate makes it incredibly effective in turf wars, and the Fizzy Bomb allows players to strategize as they prepare a deadly explosive attack. The new special weapon, the Reefslider, lets players quickly dash forward before creating a powerful explosion around them. The Aerospray MG might be difficult to use around enemies thanks to its low damage, but the Reefslider more than makes up for that. Just make sure you have a good line to launch towards the enemy team!

Note: The Aerospray MG is the only weapon in the Splatfest demo to feature the Fizzy Bomb. 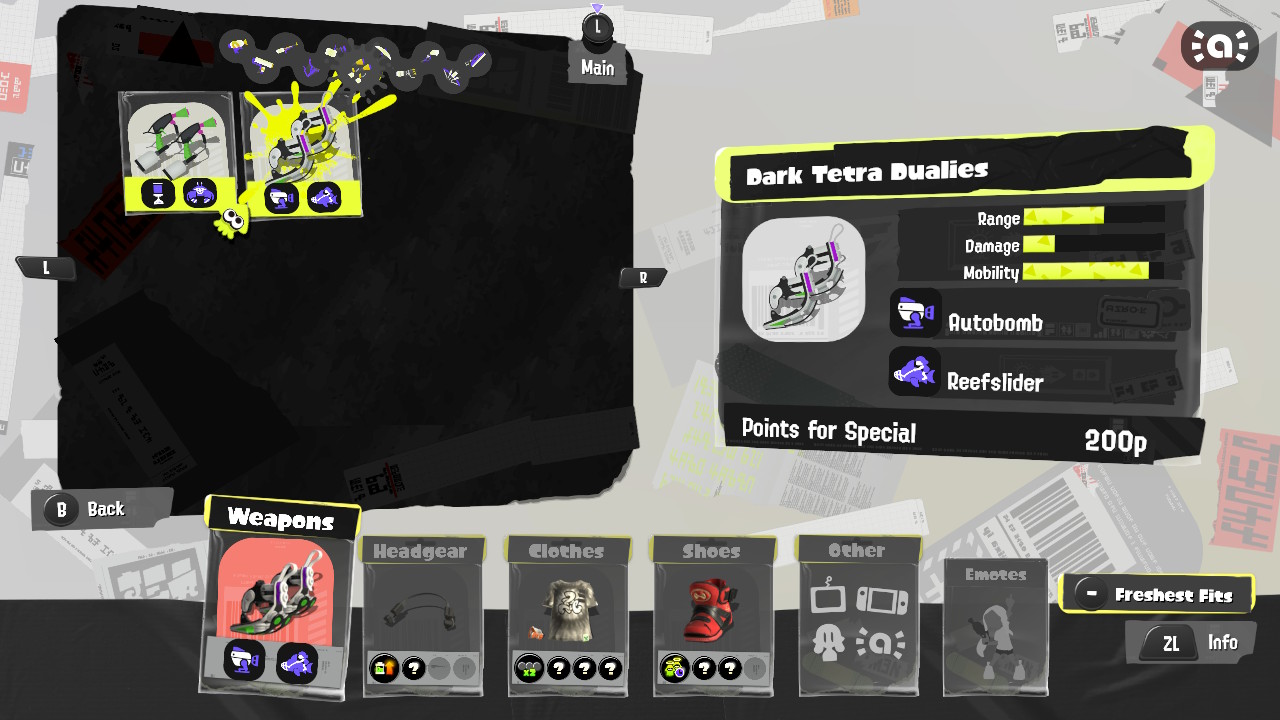 Few weapons can compete with the Dark Tetra Dualies and their excellent versatility. Unlike the normal Splat Dualies, you can continue to fire ink while dodging and you can dodge up to four times in a row. This makes them effective at covering turf, and their fair rate of fire lets them compete well enough in one-on-one skirmishes. They use Autobombs as the sub-weapon, flushing enemies out with far greater speed than other bomb types. The Dark Tetra Dualies also make use of the powerful Reefslider as mentioned previously. You’re unlikely to choose wrongly if you make these your main weapon, and it’s hard to imagine they’ll be any less powerful in the full release. 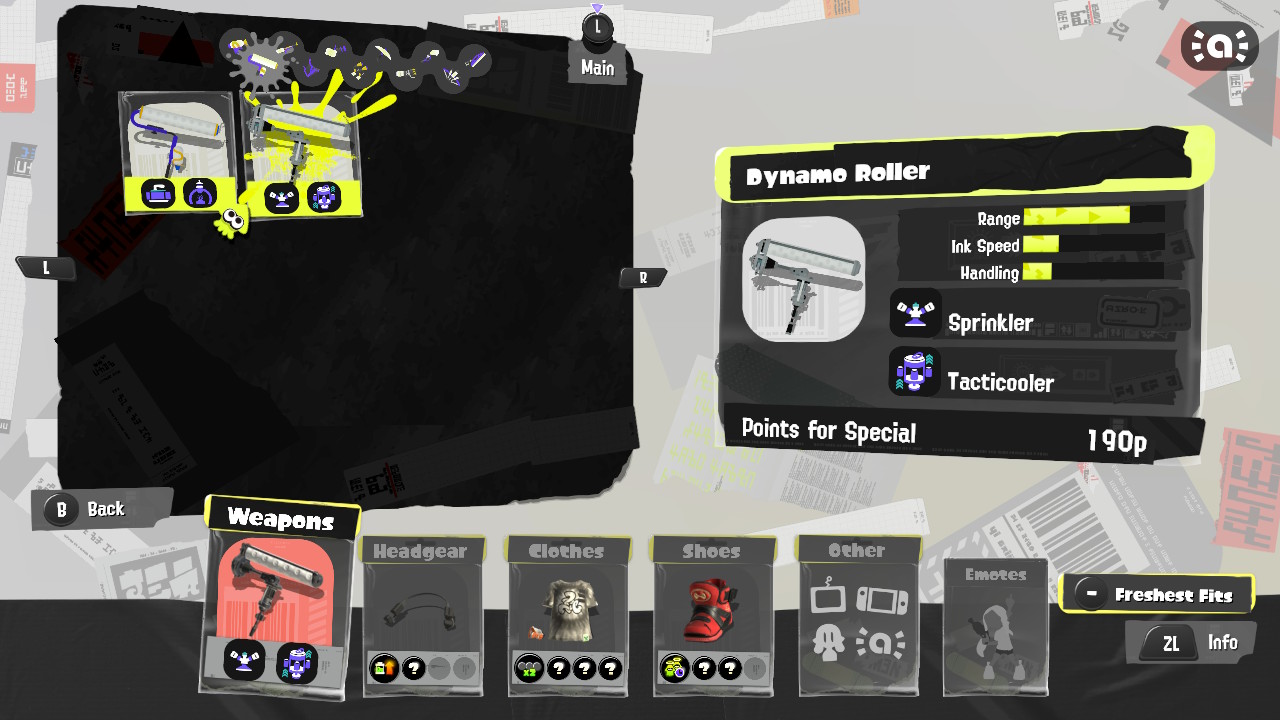 Perhaps one of the more notable fan-favorite weapons, the Dynamo Roller makes its return in Splatoon 3. It continues to boast slow speed in exchange for extremely powerful ink-lobbing attacks. This time around, it also comes with the Sprinkler and Tacticooler. The Sprinkler gives the roller some extra range and coverage while the Tacticooler allows the roller to improve allies’ speed and respawn timers. While the normal Splat Roller is still incredibly powerful, the new and unique strengths of the Dynamo Roller result in one of the best weapons you’ll find for Splatoon 3 PVP. 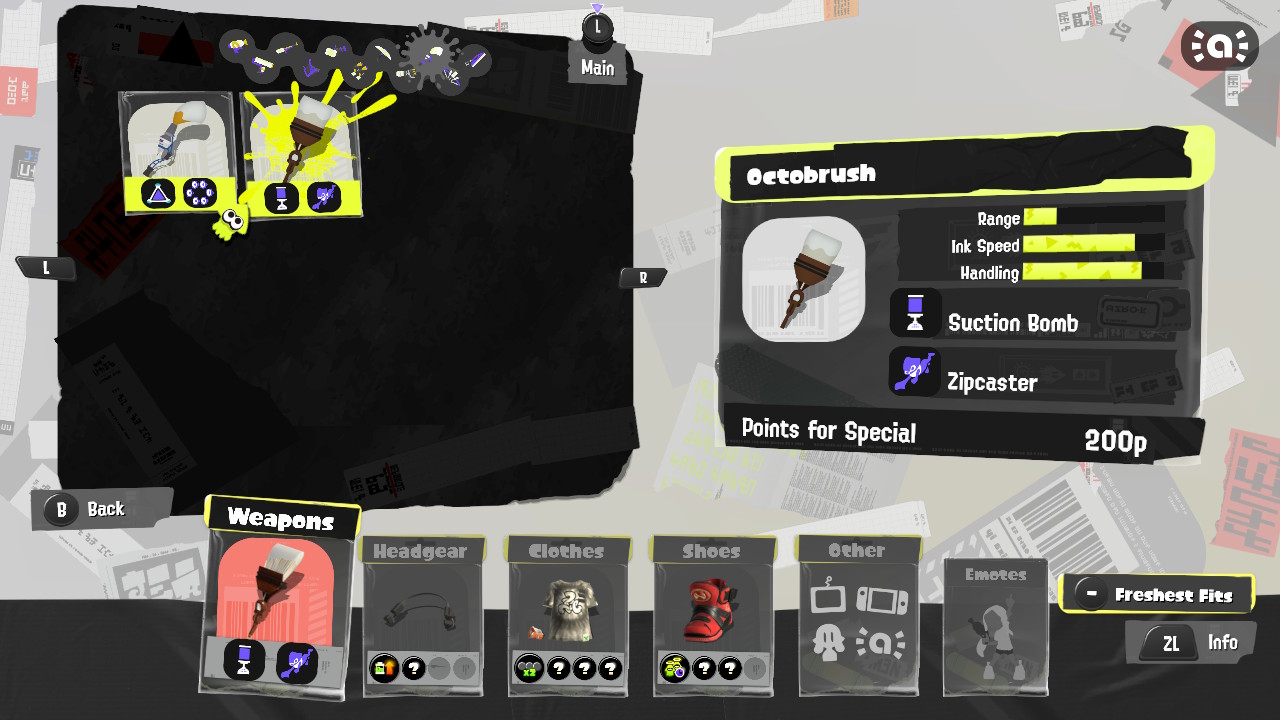 Perhaps a more controversial choice for this list, the Octobrush boasts newfound power in Splatoon 3. It continues to be an effective weapon when it comes to covering ink in a small forward arc, and the included Suction Bomb can trick opponents for easy kills when stuck on walls or grates. Where the Octobrush truly shines is the Zipcaster, a new special weapon that allows you to launch onto walls like a web-slinging superhero. The fast attack speed of the Octobrush synergizes unbelievably well with its new special. If you decide to take full advantage of this synergy, your opponents will be doomed no matter what range they’re at. 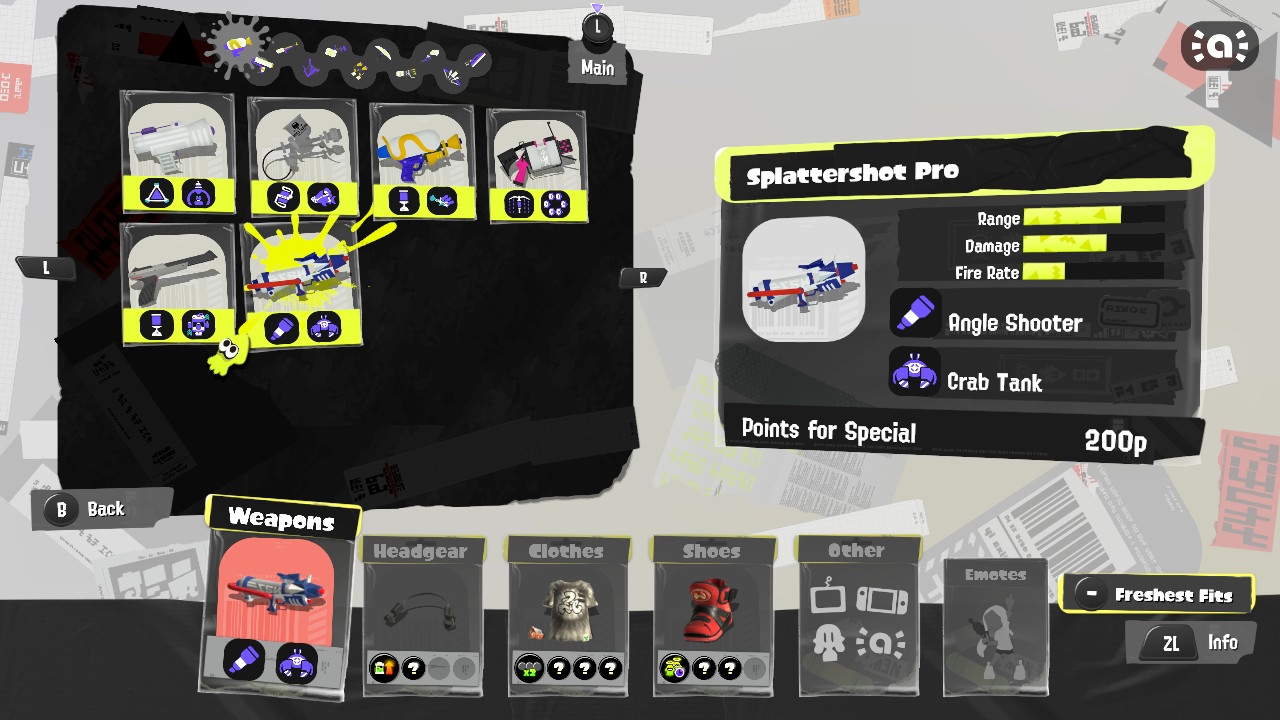 The Splattershot Pro makes very few tradeoffs for its power. Its low rate of fire isn’t great for inking turf, but the high damage still lets it shred enemies at close and medium range. Its brand-new Angle Shooter gives it even better ranged capabilities, marking enemies from afar to prevent their escape. The new Crab Tank special is highly effective at covering turf and blasting foes away. It’s certainly not as flashy as other weapons, but when you start racking up a winstreak with it, you’ll find that the Splattershot Pro is still one of the best PVP weapons in Splatoon 3.

Note: The Splattershot Pro is the only weapon in the Splatfest demo to feature the Angle Shooter. 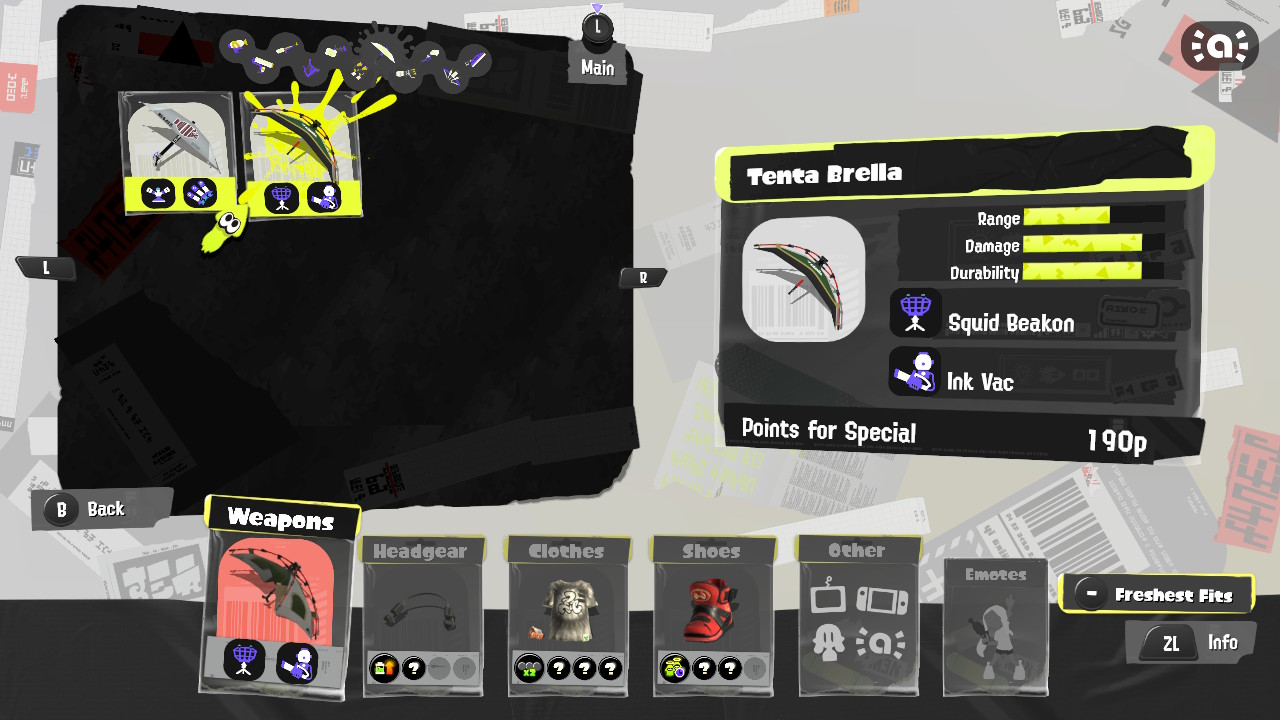 The Tenta Brella was designed as a defensive weapon, and those capabilities shine brighter than ever in Splatoon 3. Its wide umbrella covers turf extremely effectively, and it can use Squid Beakons to get teammates back into the fight faster. To top off its impressive stats, the Tenta Brella comes with the brand-new Ink Vac, a special weapon that can actually suck up opponent ink as it’s being fired from their weapons. It can even suck up bombs! Despite its slow rate of fire, the Tenta Brella is inarguably one of the greatest defensive weapons you’ll find in Splatoon 3.

Note: The Tenta Brella is the only weapon in the Splatfest demo to feature the Squid Beakon. 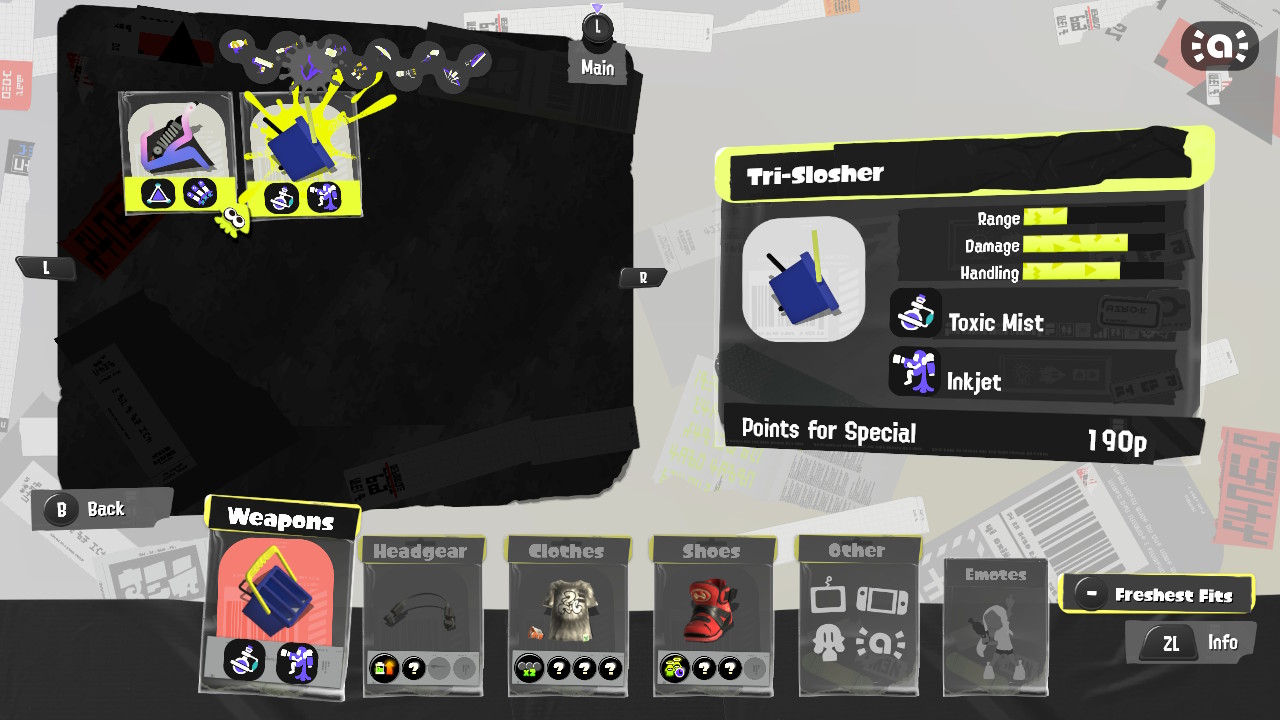 The Tri-Slosher can feel underwhelming at first. Its short range makes it difficult to use in combat and inking turf, and its Toxic Mist isn’t as powerful as other sub weapons. However, its damage is incredible, and it’s one of the few pieces of equipment in Splatoon 3 to feature a returning special weapon. The Inkjet can launch devastating long-range blows while keeping your character up in the air, making them a difficult target. The Tri-Slosher will require more time to get used to than most weapons, but its capabilities are worth the effort.

Note: The Tri-Slosher is the only weapon in the Splatfest demo to feature the Inkjet.

These are some of the best weapons for Splatoon 3 PVP. To keep from leaving too many weapons in the dust, here are some honorable mentions: