A Somber Duel to the Death 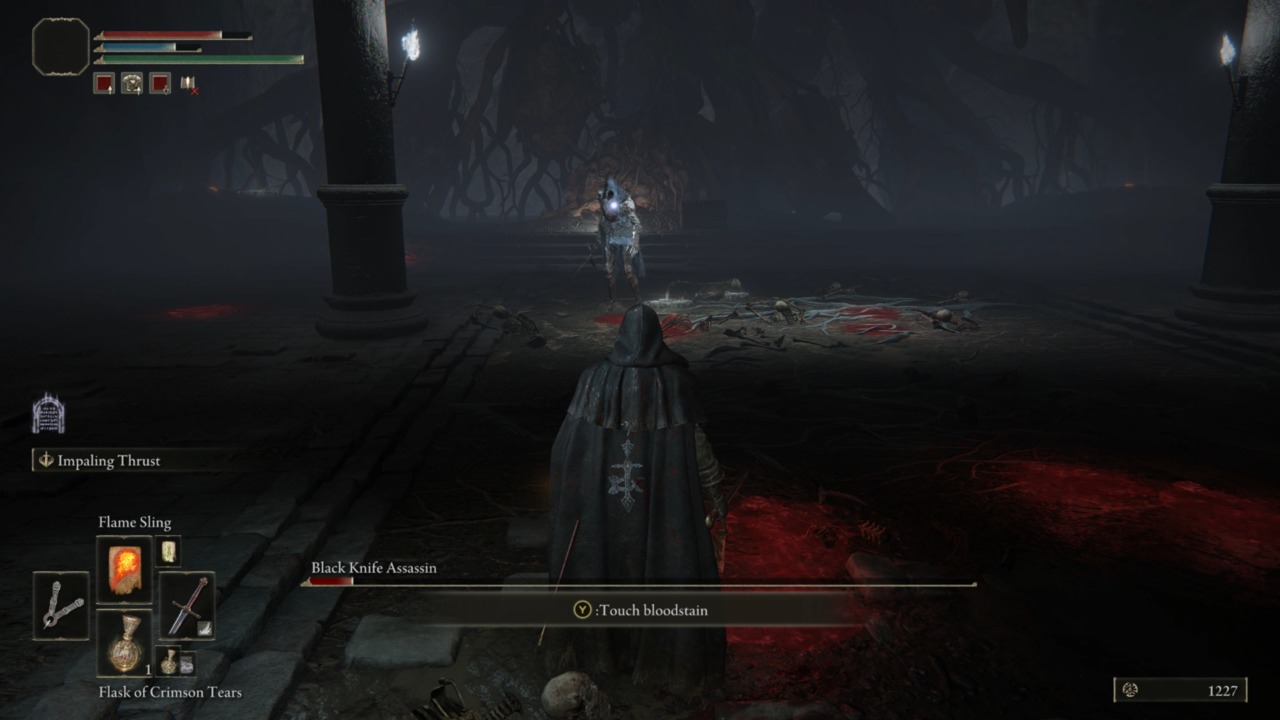 The Black-Knife Assassin is a truly fun boss battle that is trickier to reach than actually fight in. The reason the Black-Knife Assassin fight in Elden Ring is so fun is because of the truly great vibe of the entire fight. The somber music is beautiful, the dark dreary crypt’s ambiance fantastic, and facing off against a boss your size and strength makes for a great battle. Instead of you overcoming a large terrifying obstacle this battle feels more like a well-matched duel between worthy adversaries.

You can find the Dark-Blade Assassin just North-West of the spot where you battled the Deathbird, called the Deathtouched Catacombs. The door to the catacombs is built into the side of a large cliff and just outside of it you will see a crying spirit. It appears to be in despair and the spirit tells you that “their” resting place has been desecrated. When you open the door to the crypt you will find a Site of Grace which you can save/rest at. After the Site of Grace, you will enter the catacombs, before you lies the boss room door, but before you can face the Dark-Blade Assassin you must find a way to open it.

Similar to the Stonedigger Troll boss fight the Black-Knife Assassin fight is preceded by a small, but potentially difficult dungeon. If you go to the stairs left of the locked boss room, you will find two skeletal warriors waiting for you. The skeletal warriors are nimble and just tough enough to serve as an annoyance.

However, whenever you destroy a skeletal warrior there is a small couple seconds of respite until they come back to life. As you traverse farther into the crypt many more skeletal warriors and archers will begin to attack you. If you stay to fight them, you will realize that any skeletons you defeated or even ran past earlier will be coming to their aid. 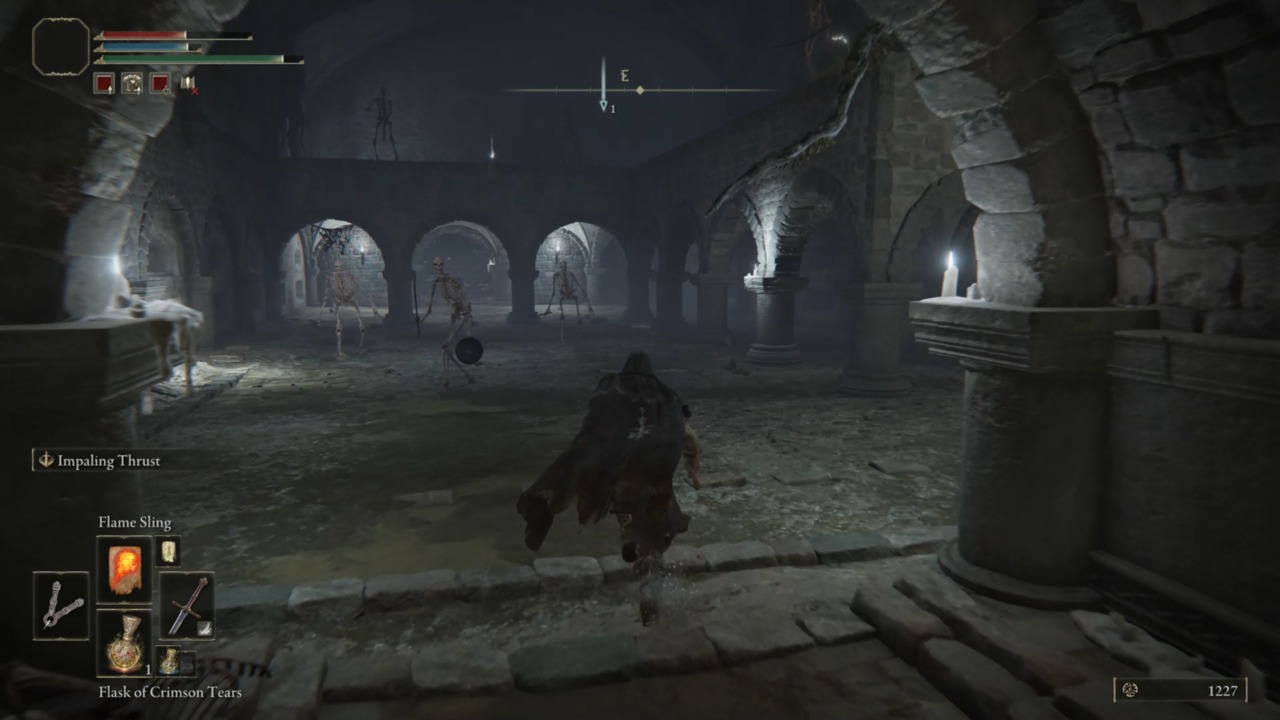 Staying and fighting here is potentially a good way to earn Runes, but it is also an eventual death trap for the Tarnished. The best way to avoid death is to run and dodge past all of the skeletons. Follow the natural path set before you to find a dead-end room with a lever in it. Pulling the lever will open the before mentioned boss room door. Now turn back and make a mad dash for the Site of Grace. Once you rest at the site the pursuing skeletons will go back to the first room of the crypt and you will be free to enter the boss room without any issues.

When you begin the fight, you will notice that the Dark-Blade Assassin is resting on the ground and only has about 75% of his health left. Like the skeletons you faced in the catacombs, the Black-Knife Assassin is nimble and tough. He dodges first strikes with ease and typically tries to counter your strikes.

That’s right, he fights like a typical Souls player fighting a boss. He mainly deals with a few twirly slash combos, a charge-up lunging blade whirl, and a charge-up thrust. The easy thing about this boss is that his counters do not punish you like a traditional boss. He will certainly do some damage if one of his slash combos is completed on you, but one strike will barely equal a scratch.

Defeating The Black-Knife Assassin with Melee 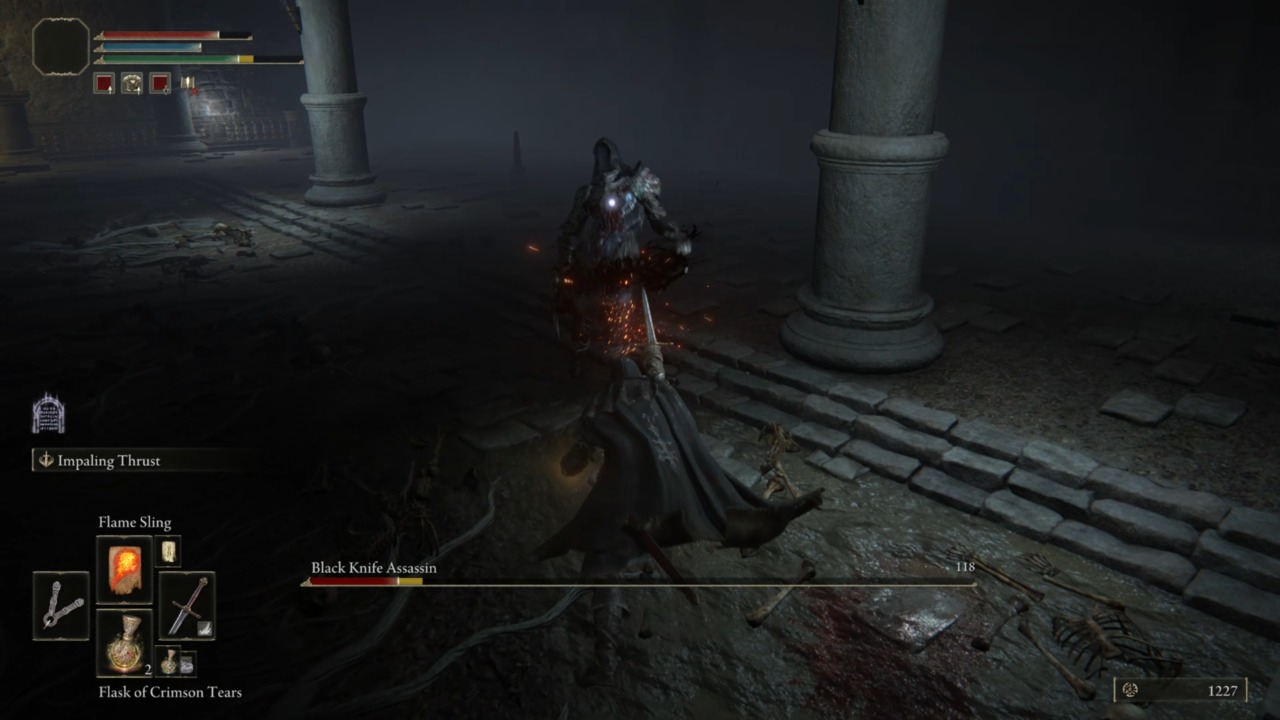 Melee is definitely the best way to deal with the Black-Knife Assassin. If you can land the first hit on him then just run a combo through its course and back out of his range. Even light attacks have the ability to stun him so do not hold back. The assassin’s attacks can be easily telegraphed so just be on the lookout to dodge when you see him prepare to strike. If you feel confident enough, you can even start to strike the assassin when you see him start his attack with a high chance of interrupting it. Choose any number of melee strategies to take down The Black-Knife Assassin.

Defeating The Black-Knife Assassin with Magic 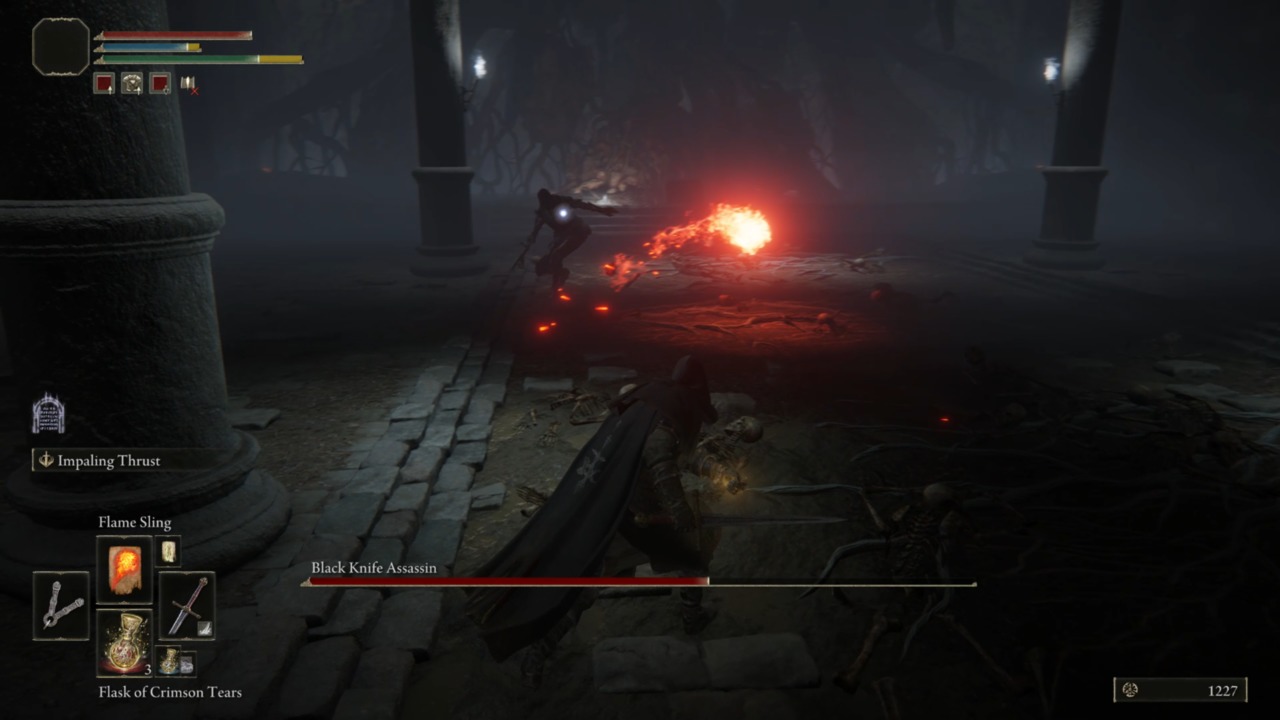 The Black-Knife Assassin is best defeated with melee techniques unless you are a seasoned sorcerer. He dodges most first attacks, but he can easily dodge simple magic. If you have any tracking sorcery or wide-ranged powers such as “Glimstone Arc,” then hanging back and spamming these spells should earn you a quick victory.

If you insist on using simpler magic, however, then the best way to utilize it is to get the Black-Knife Assassin to start one of his attacks and blast him before he pulls it off or reaches you. Repeat this until the assassin is no more. Once felled, the assassin will leave behind the Assassin’s Crimson Dagger Trinket which restores health to the Tarnished every time they land a critical strike.