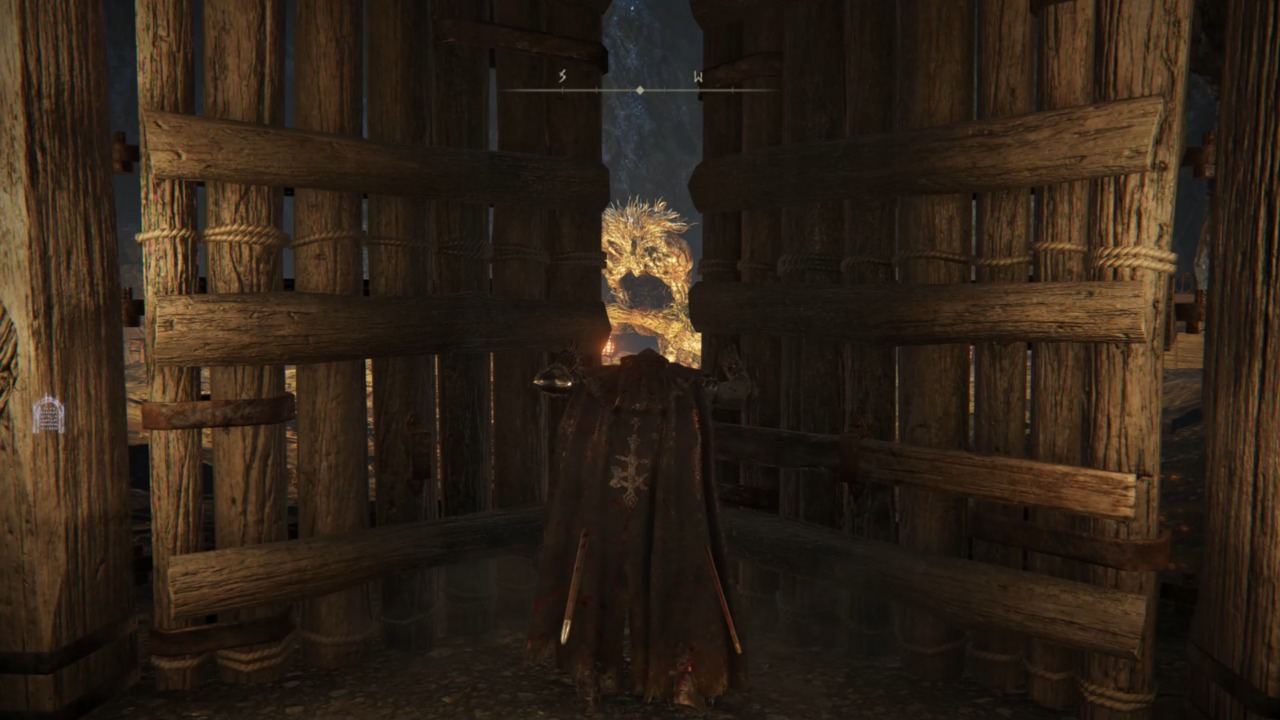 Elden Ring’s boss, The Stonedigger Troll, is a tough nut to crack, and I mean that quite literally. The Stonedigger’s armor is tough, and it will not only reduce the damage you do to it but limit the combos and fighting styles you can take it on with. So, prepare yourself to dive into the Lingrave Tunnels and slay the mighty Stonedigger Troll.

Every part of this boss encounter should remind you of the Dark Souls of old. From the tough mine shaft, you must traverse to get to the fight all the way up to the boss battle itself. The boss battle makes itself unique by limiting basic strategies that can be used on most other bosses. However, before you take on the Stonedigger Troll you must reach its lower sanctuary.

The Stonedigger Troll resides in the Lingrave Tunnels which is located just south of the Site of Grace where you unlock Torrent. The tunnels entrance is at the bottom of a cliff that takes you to a murky mire area. Entering the Lingrave Tunnels will of course immediately lead you to a Site of Grace where you can save, rest, and recover. When you begin to move through the tunnels you will find Stonediggers hard at work mining. Because most of these enemies will be distracted from their work you can easily sneak past most of them. That said, taking a few if not all of them on will actually score you some decent practice for the boss.

Sneak up on the stonediggers and make sure to backstab them. This will only take their life down by half but will be a tremendous help. Here is where you will learn that these creatures are not called stonediggers because they dig up stone, they are called this because they are made of stone. All physical attacks will do less damage than usual and normal strikes will bounce off of them leaving the Tarnished stunned. The only way to combat this is to either attack from afar with magic (arrows do very little damage) or two-hand your weapon in order to attack through their stone armor. It is best for the player to try and utilize the two-handed tactic if they wish to save their magic for the boss fight. 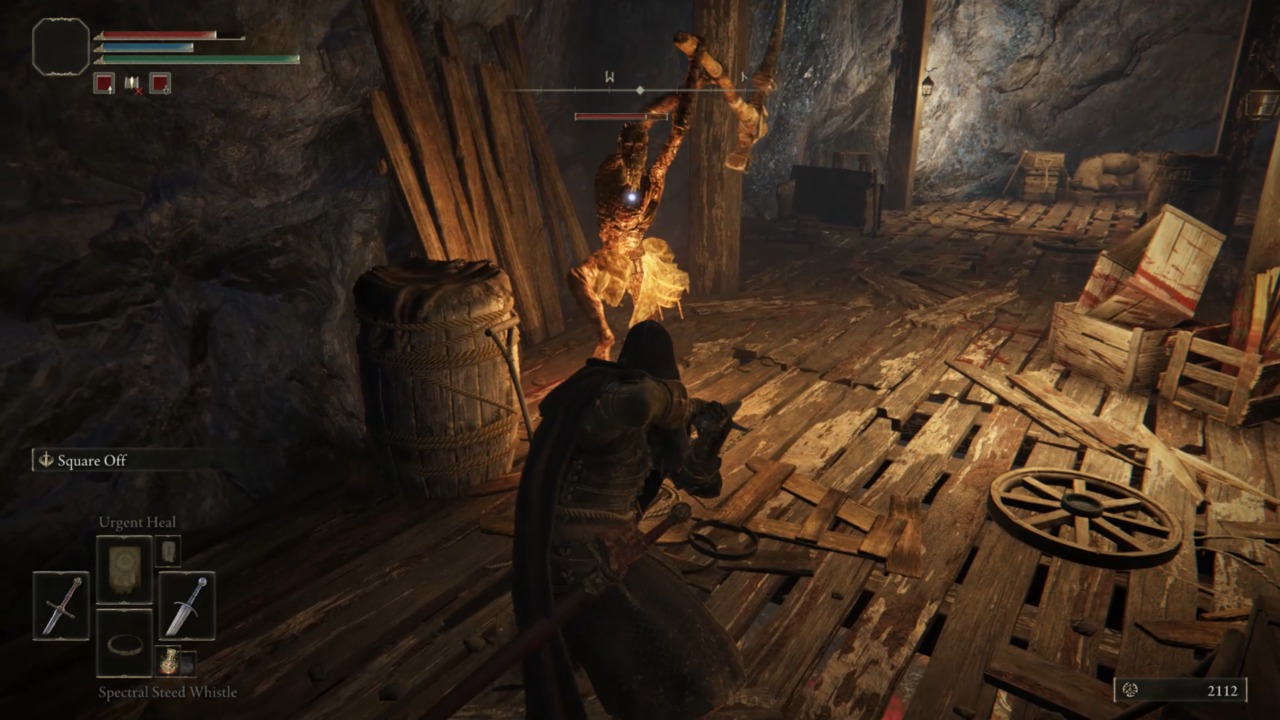 After first entering the tunnels and taking down the first few stonediggers you come across head down the wooden stairs to a new tunnel. This one will lead you to an elevator that will take you down to a lower floor. If you wish to explore all that the tunnel has to offer ride the elevator all the way down. If you are wishing to proceed to the boss, midway down is a landing you must jump onto while the elevator is still moving downwards. Take care to not miss the landing as falling from this height could be deadly or at the very least a waste of healing flasks.

When you come to the end of this tunnel you can look out and see that there are several stonediggers hard at work and passages to both the right and left. The path to your right is a dead end and there is a stone digger on patrol. The path to your left will take you to the boss room, but there is another stonedigger on patrol that has the ability to breathe fire at you.

It is best to avoid any confrontation in this area, but if you insist the best way to handle it is to time the patrol guards right when they are not looking and backstab the workers one at a time. After this, lead them to the initial tunnel entrance where you leaped off the elevator and fight one on one. Repeat this process until you only have the left patroller to fight in the tunnel it guards. Finally, once you have moved on from here and taken the left path you can use the elevator to go down and spot a wooden gate. Push it open to begin your boss fight with the Stonedigger Troll. 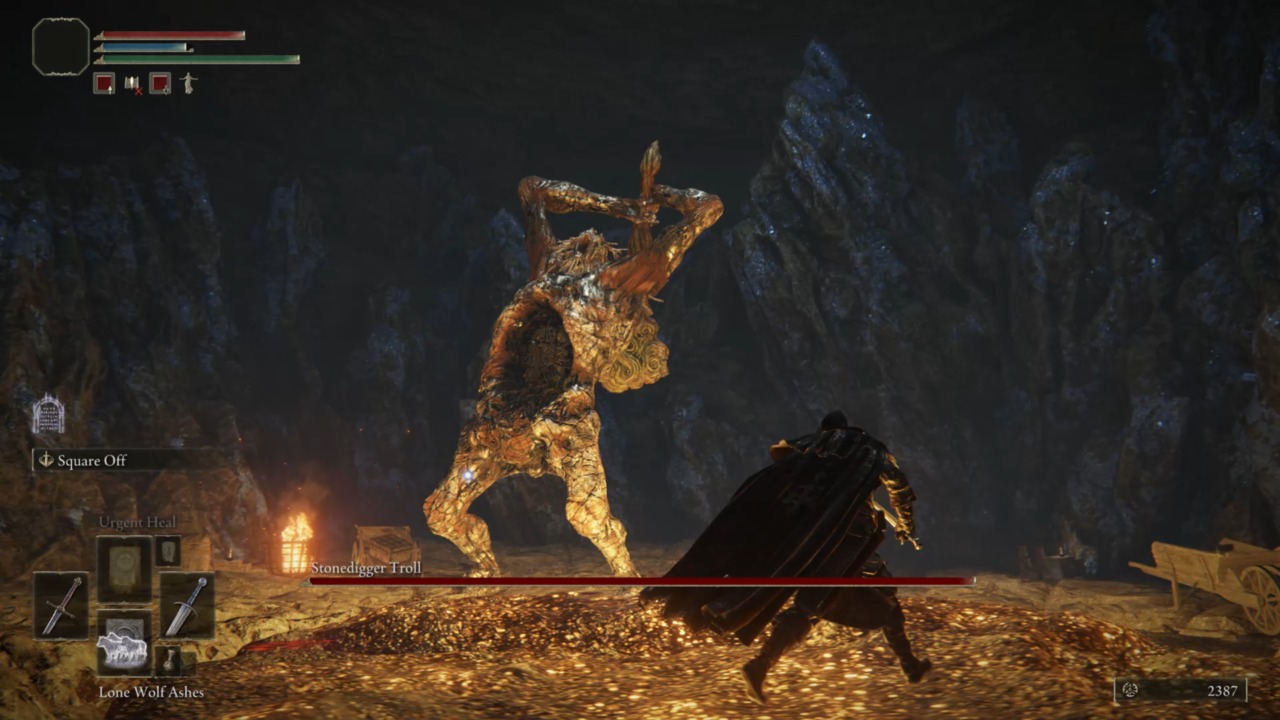 It was stated above that the regular stonediggers would be good practice for the troll and that was incredibly true. The Stonedigger Troll has the same armor effect that its minions had and if you are trying to go in for your basic combos and quick roll out you will be met with death. In order to take this troll down with melee strikes, you will need to be very aware that your normal combos will be ineffective at first.

The troll can deal devastating damage with its stone hammer and when it does its massive smash attack the ground beneath you will shatter and a splash attack will need to be avoided. The troll will also sweep its hammer at you causing you to dodge with precision if you want to avoid taking the hit. It can also hit you with its off hand in the middle of a combo, and finally, the creature can let loose a flurry of ground pounds and hammer smashes.

Begin with your main weapon two-handed in order to deal more damage and attempt to slice past its armor. If you have fought a troll before in the open world you will remember that it can be targeted at either its body or legs. As a melee fighter you will not be able to do damage to the body, but make sure to only target a single leg. When the legs are worked down and their own mini health bar is depleted the troll will collapse. This is when you can unleash your usual combinations on the defenseless troll. Repeat this strategy until the beast lies dead. 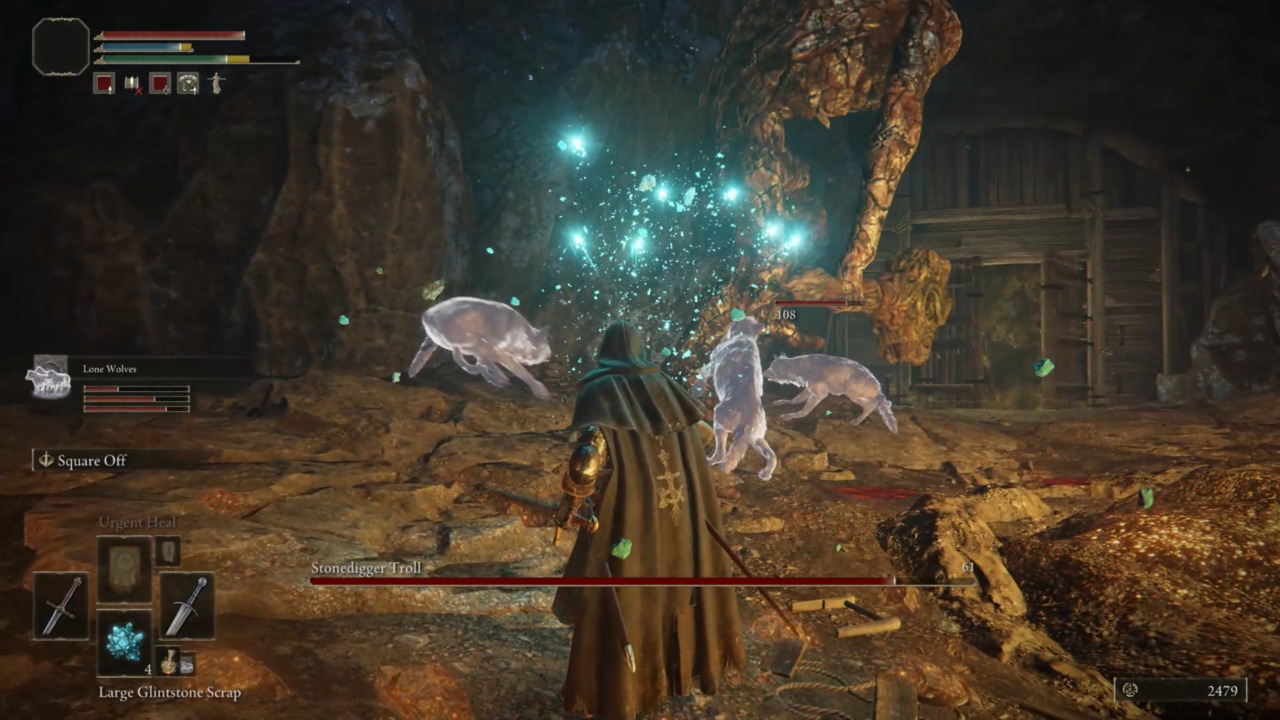 Because the Stonedigger Troll has such tough armor for most of the fight the most ideal strategy might be using sorcery. If you received the Lone Wolf Ashes from Renna the Witch early in the game then you should summon those. Because there are three of them the chances of them all dying fast are slim. While the wolves are busy distracting the troll back off and begin your barrage of sorcery.

The troll will become fixated on the wolves and is too slow to corner you as quickly as the Beastman of Farum did. Continue this process until you have defeated the troll or when the wolves have died. If you do not have the wolves or they die quickly do not fret, while the troll does have some mighty strikes, they are slow and easily telegraphed. Once you see them coming, dodge, run back, cast sorcery, and repeat. 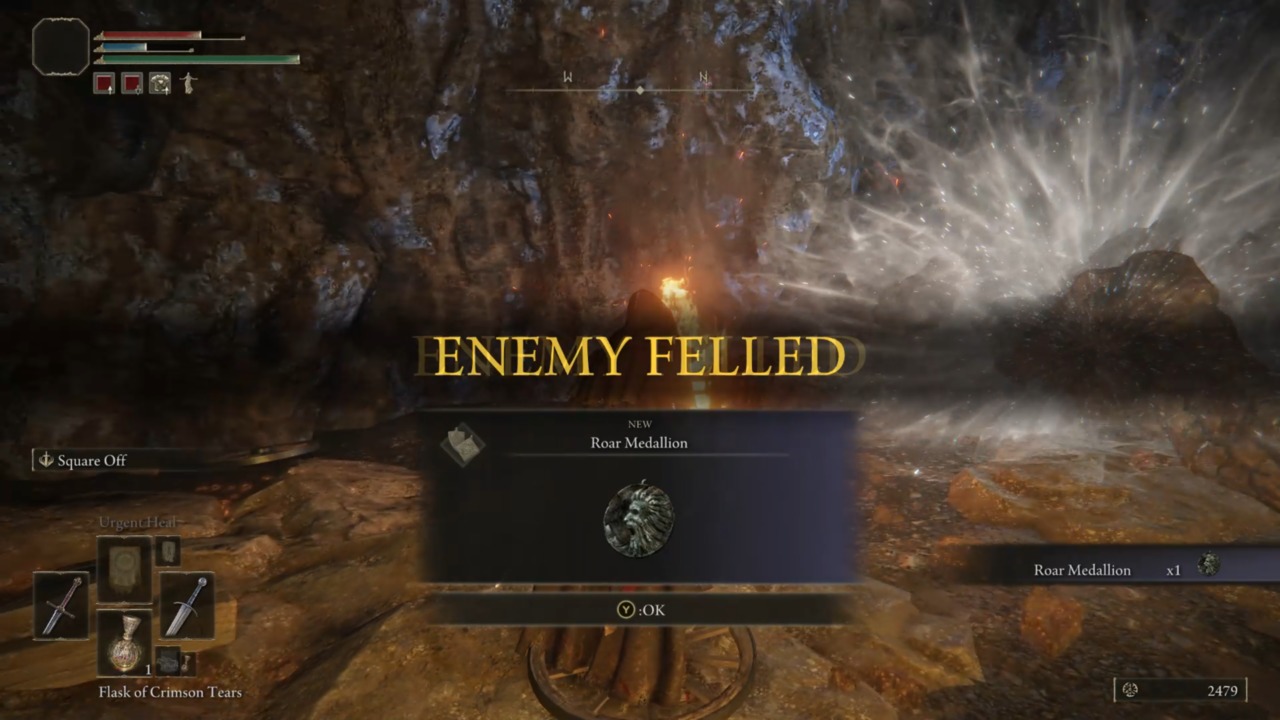 Once the Stonedigger Troll is felled you will receive your reward, the Roar Medallion. This Medallion boosts any roar or shout powers you may utilize. After looting what little there is in the room you can finally go to the transporting glow that asks to take you back to the beginning of the tunnels. It is best to sneak past and avoid all the stonediggers until you destroy the troll. Afterwards is the ideal time to explore and loot the tunnels.