Does Pity Carry Over Between Banners in Tower of Fantasy?

Answering a Crucial Question Regarding the Limited Banners. The limited banners in Tower of Fantasy can prove somewhat foreign to MMORPG players that are alien to the concept of pity systems in Gacha games. It might be possible to argue that the pity system in Tower of Fantasy will prove slightly more complicated than the average Gacha, due to its limited banner mechanics. As the currency acquired from pulling on limited banners becomes standard currency when the character pulling event is over. It stands to reason that figuring out the system related to Limited Banners will help players in the long run.

Do Pulls Carry Over on Limited Banners in Tower of Fantasy?

The short answer would be that pulls made on the event banner will carry over from one event banner to the next, as long as the pull count hasn’t reached 80 pulls. Such restrictions are in place as reaching the 80th pull count would guarantee an SSR character, resetting the pull count back to 0. Meaning players have the leniency to stop anywhere between 1 and 79 pulls.

Players can check for information regarding the pity system of Tower of Fantasy via clicking the more info button after accessing the tab named after the current event banner. This concept regarding pity count is consistent as the official wording for banner descriptions and official announcements regarding pulling on “Limited Order” points out the same system in brackets following the “80 special order” sentence. 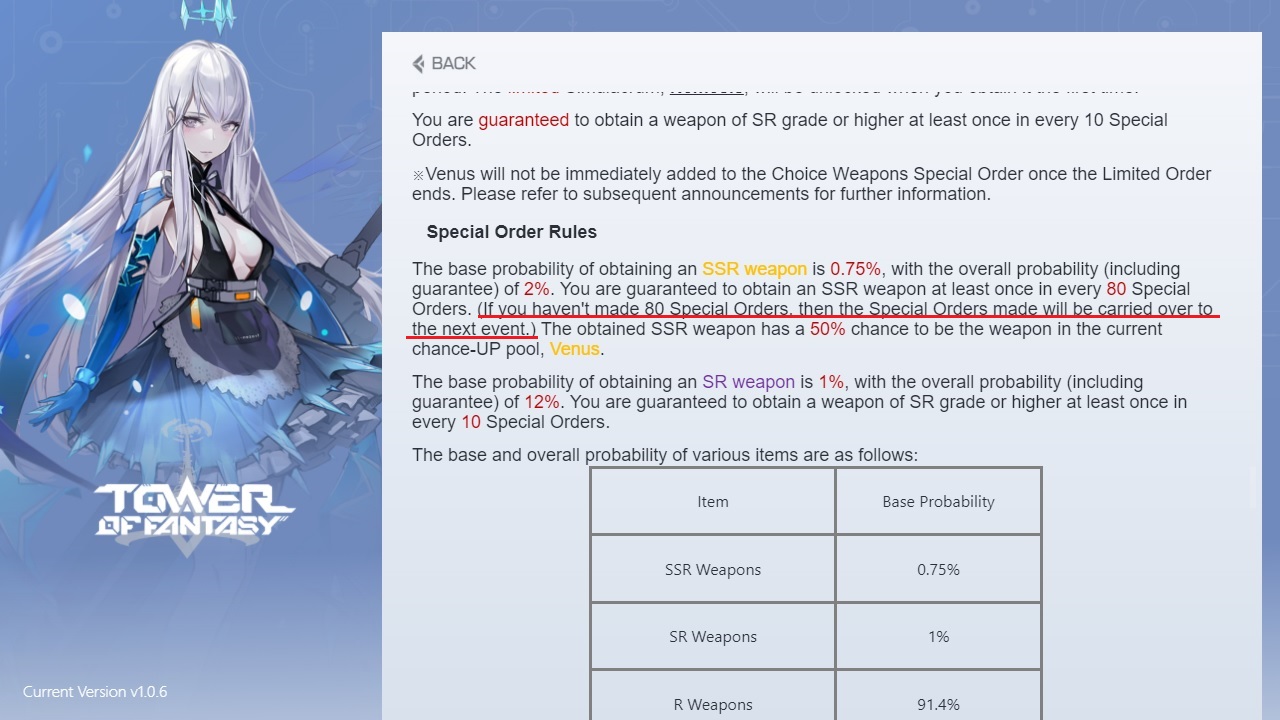 This pity system does not affect the Flame gold (Rebirth) items acquired from using red nucleus on limited banner pulls, Flame gold (rebirth) can be used to exchange for limited banner weapons after the player has accumulated 120 pulls on a singular event banner, via accessing the Limited Store. Flame gold converts into black gold if not spent before the banner ticks over, becoming items that can only be used to exchange for weapons and other items in the standard Weapon store.

The Flame gold (Rebirth) that can be acquired via limited banner rolls should be considered in tandem with the pity count as players decide the number of dark crystals they’ll spend on any limited banner. Less than 120 rolls will not guarantee the character that they want from the banner but will carry over to the next Limited Order if players have yet to reach the 80th pull. This could come in handy if the devs for Tower of Fantasy announce the next Tower of Fantasy banner character before the Nemesis banner expires, allowing players the insight to continue or stop.

Attack of the Fanboy / GAME GUIDES / Does Pity Carry Over Between Banners in Tower of Fantasy?