How to Build Candace in Genshin Impact: Weapon, Artifacts and Team Composition

To Protect With Spear and Shield. 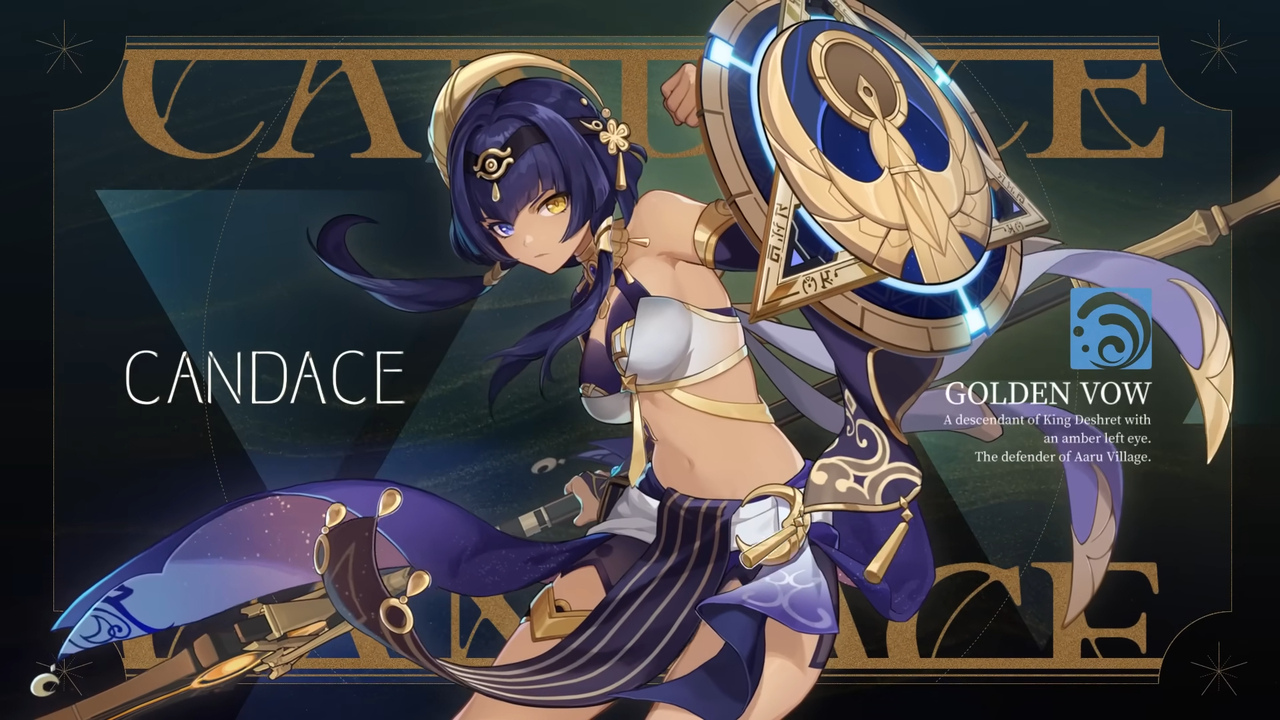 Making a build for Candace in Genshin Impact can prove to be an easier endeavor than players would assume, and it ties into the way that her character kit scales and the functions that a player would want out of the Guardian of the Aaru Village with her slotted in your party. With the release of Patch 3.1, Candace saw release alongside Cyno, an electro polearm five-star that may have swayed players into pulling for the limited character banner alongside Candace. Though the two characters aren’t synergistic with one another, Candace certainly has her uses in different team compositions.

The Stats That A Candace Build Would Want in Genshin Impact

Candace is similar to a compatriot of the same element, Yelan — Candace’s character kit scales entirely on HP. Different from Yelan, however, is her lacking capabilities in performing as a damage healer. This lack in damage relegates her to the support position, where the players switch into her occasionally to block with her shield, and mainly to boost team damage with her elemental burst.

The stats that a player would want on Candace are thus down to just HP%, flat HP, and Energy Recharge. HP to increase her scaling, and Energy recharge to ensure that the character is always capable of triggering her elemental burst whenever it’s off cooldown.

The limited number of stats that she wants as a character helps to narrow down the selection of weapons that would be fitting for her to use, and they are as the following:

The secondary stats for Skyward Spine and Engulfing Lightning should be self-explanatory as to why they’d be viable options. Both boost energy recharge quite considerably. The same can be said for The Catch and Favonius Spear, with The Catch helping to augment Candace’s elemental burst damage even further. If players want to run the Favonius Spear, they will have to deal with the unfortunate caveat that is needing crit rate to reliably trigger energy particle passive.

Due to the lowered priority of wanting damage for Candace, The Black Tassel will be a surprisingly solid option for players that have artifact pieces with good energy recharge sub-stats that already ensures Candace’s energy recharge.

Engulfing Lightning is currently not available due to being a limited weapon, while The Catch is going to require some extent of fishing to refine and obtain.

Artifacts to consider for a Candace Build in Genshin Impact

Due to the selective main stats and sub-stats that Candace wants on her artifact set, the options that the players can pick from are convenient, albeit limited:

Aside from if the player’s equipped her with the Black Tassel, players might be able to get away with using HP% sands if they are using any of the other weapon options, alongside decent sub-stats in terms of energy recharge.

Noblesse is always a good idea to consider if the player doesn’t have another Noblesse 4-piece user on the team. Due to the frequency at which Candace will trigger her ultimate, the attack buffs from the set should prove consistent. On the other hand, it might be possible to make an argument that the two-piece mixed option of Emblem and Tenacity will prove more favorable compared to the Emblem four-piece set, due to the character’s interest in having the right stats to boost her teammates, and less so in boosting the damage of her Elemental Burst itself.

Due to playing the role of a support, it is difficult to recommend building a team centered around the character. Instead, it would be preferable to use Candace as a piece for completing other team compositions. Her elemental burst is made for boosting Normal Attack damage and as such works the best with damage dealers focused on Normal attacking. Being a hydro character also means that she’ll naturally slot better into teams with other hydro characters, serving as a battery while securing Hydro resonance.

Depending on whether the player is running a hydro, electro, or cryo-based team composition. Whether to slot in Candace will depend on the roster of characters that a player has at their disposal. Take the above information into account if you want to use Candace in your teams, though to do that at full efficiency will require finding some Redcrests first as she needs them for her ascension.

Attack of the Fanboy / GAME GUIDES / How to Build Candace in Genshin Impact: Weapon, Artifacts and Team Composition