The M16 still has some power in Modern Warfare 2, so get ready to climb the leaderboards with this loadout. The M16 assault rifle is one of the few burst fire rifles in Call of Duty: Modern Warfare 2. Mastering a weapon like this takes time and skill alongside the right attachments to get the desired output. That is why we will show you the best M16 loadout available so you can start using the burst fire beast as intended.

To get the best out of this weapon, players will use the 45-Round Magazine. The standard 30-Round Magazine will not be enough if players face many opponents or miss a few shots. Missing a single click with this weapon means wasting three bullets, so players can go through a mag quickly if they are not careful.

For the Under-barrel slot, players must use the VX Pineapple Vert Grip. This grip will help with the weapon’s recoil control and hip fire accuracy, at the expense of some aim down sight speed and hip walking speed.

For the Muzzle, we recommend players equip the Forge-Tac Castle Comp. This Muzzle attachment will improve the vertical and horizontal recoil of the weapon at the expense of some aiming stability and aiming down-sight speed.

For the Optic attachment, users should pick the SZ Lonewolf Optic. This optic offers a clear line of sight, and its low magnification makes it easier to track enemies while shooting at them. If players feel comfortable going for targets at long ranges, they could use an optic like the Schlager 4x or the HMW-20.

For Stocks, players will be using the Corio Precio Factory. This stock will improve the weapon’s recoil control and aiming stability at the cost of movement and aim down-sight speed.

Even though the M16 is a burst rifle, after a couple of clicks, players can lose track of their targets. This is why we recommend all these attachments that help with recoil control and stability. 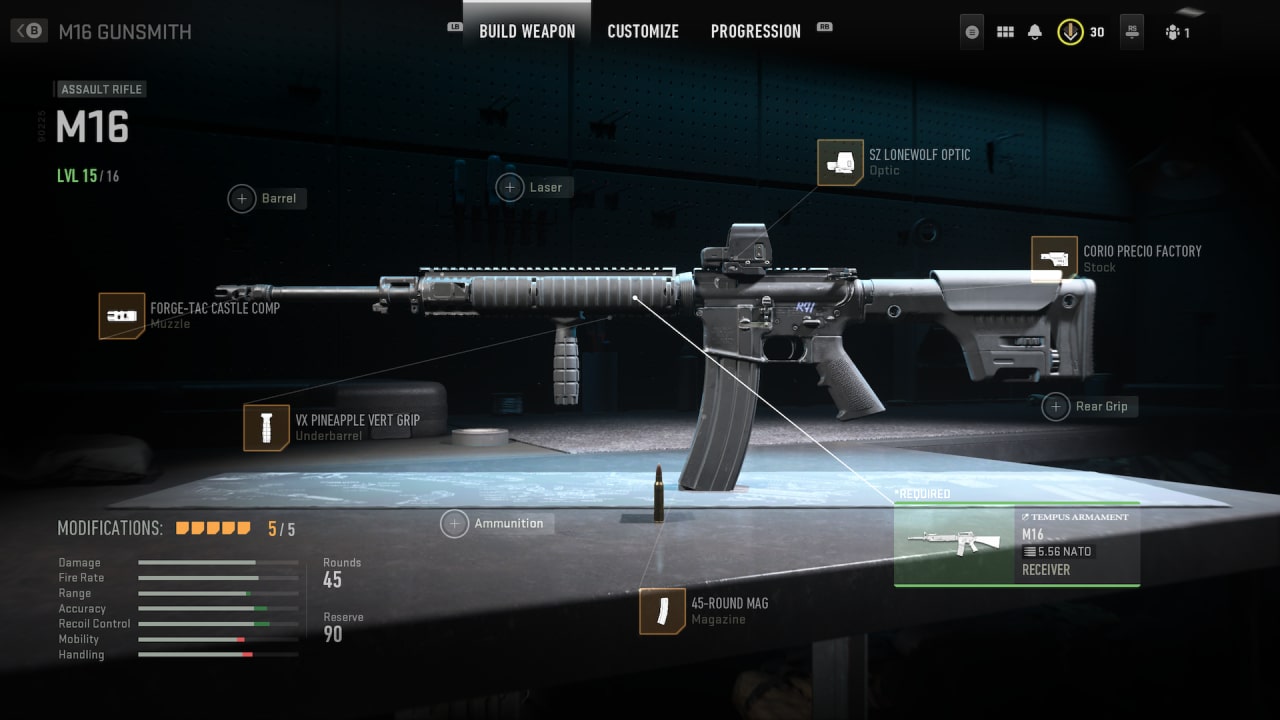 For Basic perks, players must use Double Time and Scavenger. The former will allow players to move faster by doubling the tactical sprint duration and increasing the players’ crouch movement speed, while the latter lets players get ammo from fallen enemies. If players are not comfortable in close ranges with the M16, they can go for the Overkill perk and use the best FSS Hurricane loadout they can get.

For the Bonus perk, we recommend players use Quick Fix. This perk will trigger health regeneration immediately after killing players. If players feel like the Medical Syringes are enough, they should pick either Fast Hands or Cold-Blooded.

For Ultimate Perks, players will pick Ghost. This perk will make players undetectable by UAVs, portable radars, and even heartbeat sensors.

For the Field Upgrade slot, players will need to pick Dead Silence. This is one of the best Field Upgrades in Call of Duty: Modern Warfare 2, and it is because it allows players to move through the map silently for a limited time.