World of Warcraft Shadowlands: How to Earn Stygia

The Maw is an unforgiving place, so you'll want to optimize your Stygia farm. 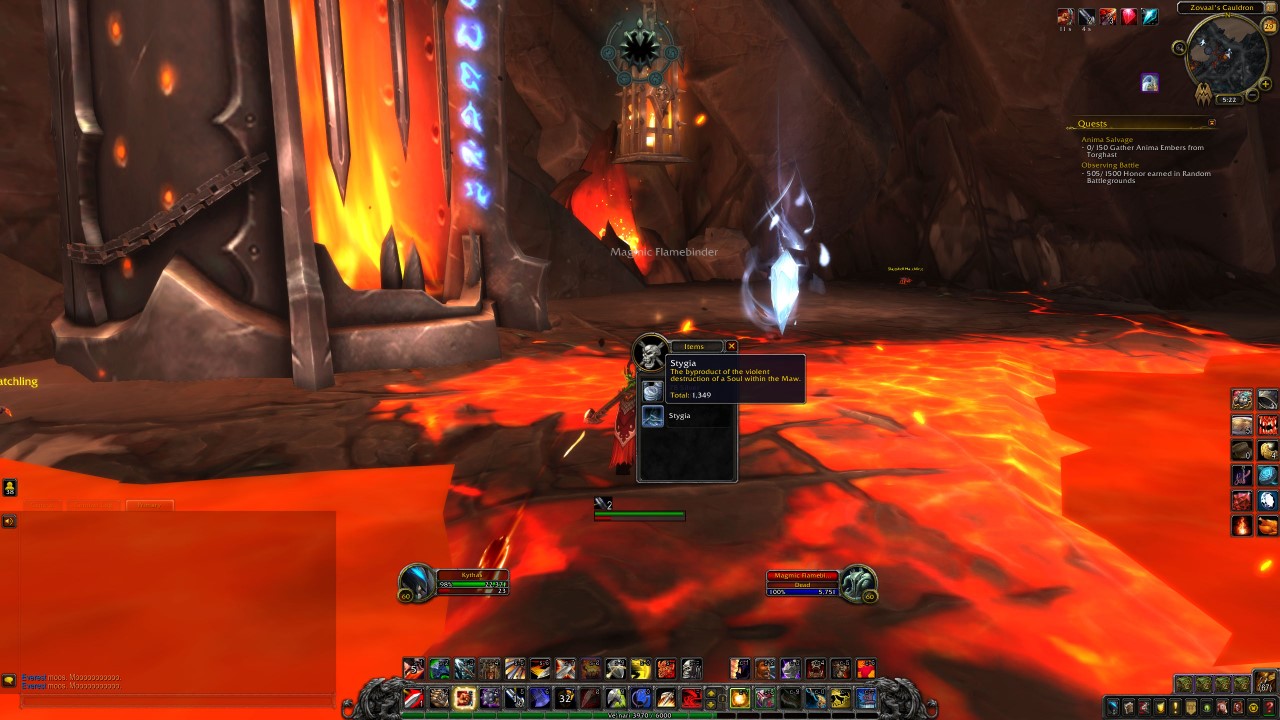 Stygia is a currency used to purchase goods from Ve’nari within the Maw in World of Warcraft Shadowlands, and you can easily lose hours worth of farming if you aren’t careful. Stygia is dropped upon death (though only a portion of it), and while you can recover it by visiting your grave within the Maw, it will be lost if you die again. Yep, it’s essentially a Soulsborne currency. That’s why it’s important to know the best ways to earn Stygia, and how to maximize your daily gains before the Jailer turns his eye toward you.

Stygia in Shadowlands is earned from killing enemies in the Maw, and from completing quests.

It’s important to note that Stygia earned from killing enemies within Shadowlands’ Maw zone varies. While you’ll earn one Stygia from normal and regular elite enemies, you are far better off hunting down the various rare enemies that spawn in the Maw. For example, a special encounter rare (the most common rare found in the Maw) drops 45 Stygia upon death. There is a catch though: killing rare enemies increases your Eye of the Jailer meter faster than murdering regular enemies.

Technically you can farm more Stygia and earn less Eye of the Jailer by killing regular mobs than you will by murdering event rares, but that’s a slog and a half. Rare enemies are not your only source of Stygia – the Maw has both daily and weekly quests that provide the valuable currency, but these boost your Eye of the Jailer meter more than killing a rare monster! Rares also have a chance to drop Maw lore quest items, which can be turned in for reputation with Ve’nari.

The key to successful and efficient Stygia farming is focus. You’ll want to knock out your Maw quests first and foremost, then fall back on rares and events. Prioritize minor and major rares over event rares, since they offer more Stygia per Eye increase (special encounter rares are the skull icons on the minimap, while all other rares are the usual star). There’s a weekly Wrath of the Jailer event that appears occasionally, though you’ll want a team to knock the final boss out (this shouldn’t be hard to organize, but may become more difficult later in the week as more players complete it). As a bonus, Wrath of the Jailer has a chance to drop item-level 183 gear.

Burningbamf over at WoWHead created an excellent chart that breaks down all the sources of Stygia, which I’ve included below. Reference this if you want to know exactly what you will earn from each source, and how much Eye of the Jailer each will cost you. Each rank of Eye of the Jailer takes 1000 points to reach, so at 5000 points you’ll reach rank 5 and will be unable to earn any further Stygia from the Maw (Stygia and reputation gains are literally disabled at rank 5).

Stygia in Shadowlands is used to purchase items from Ve’nari, your helping hand within the Maw. She has items that will make both the Maw and Torghast easier to tackle, in addition to two items that will greatly benefit your endgame progression: the Unbound Reality Fragment and Spatial Realignment Apparatus. Just remember Stygia is dropped when you die, though only a portion of what you’re holding. If you want it back you’ll need to return to your corpse and loot it. If you die before grabbing your dropped Stygia it’ll be lost forever, and you’ll once again drop Stygia that can be recovered from your new corpse. Approach your Stygia farm with caution, and pick your tasks wisely.