Zombies in Spaceland Beginner’s Guide: Tips for How to Survive 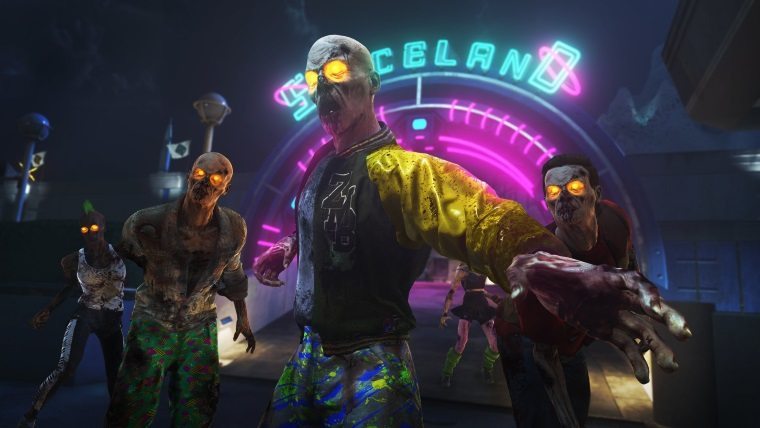 Millions of people have already picked up, or will be picking up their copy of Call of Duty: Infinite Warfare. While many will be diving into the campaign, or hopping into some online competitive multiplayer, for a large portion of that audience, the big draw is the new Zombies in Spaceland map. This mode offers four players the chance to team up against waves of increasingly difficult zombie hordes. We’ve broken down some aspects of the game already, but wanted to give a more general beginner’s guide, so here’s tips for how to survive in Zombies in Spaceland from Call of Duty: Infinite Warfare.

When the game starts you will be in a tiny, confined area. It might be tempting to stay here for a bit, killing zombies, racking up cash, and avoiding the larger sections of the park. Don’t do this. You want more mobility (more on this later), and all the good weapons are out there in the park. Two big things are right in the next area, so as soon as you have the $750 ready I suggest opening it up. There you will want to grab the robot N3IL’s head and start him up, then try to complete his challenges (see more about that in this Easter Egg guide). You’ll also want to buy the Oni, which can be found on a bench near the bridge to Polar Peak. This cheap gun packs a huge punch and ammo refills are pretty easy to get.

Otherwise known as “aim for the head”. Make sure you aren’t wasting ammo, even for your starter pistol. Ammo is the main resource in Zombies in Spaceland, and running out of it means you are pretty much helpless against the zombie horde. You can buy more ammo, or earn more from various powerups, but once you break through into the later waves it will become very important that you keep as much ammo on hand as possible. When brutes show up (see how to beat these giant “alien” creatures here), or you have a massive horde coming after you, you will want to be able to fight back.

With that said, you don’t always have to be fighting, in fact sometimes that’s not right to do (bad grammar, sweet reference). You are fast, zombies are slow. Use this to your advantage. You should almost always be running, dodging zombies or firing off headshots into their cranium. You can also still slide, which is great for avoiding incoming attacks. If you’re standing still, there had better be a solid wall to your back, otherwise you need to get running. The best way to take out whole waves of zombies is to run around, kiting them around the map. When you’re ready, turn and take them out with well placed bursts of shots. You can also use this to your advantage with the many traps scattered around the park. 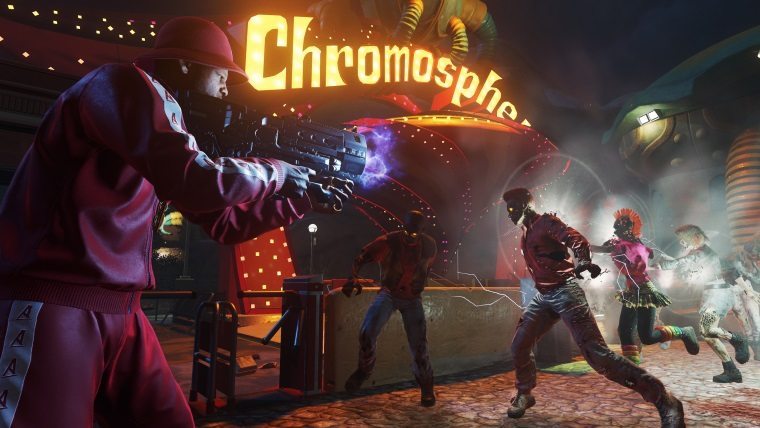 Use the Traps/Power up the Park

Yes, Spaceland is full of deadly traps that you can use very well to your advantage. Of course, to do this you need to first power up the park, see this guide for how to do that. Once powered up, just get a large group of zombies to follow you, lead them to the trap, and activate it with the nearby panel. Some traps are automatic, so just run zombies through them whenever you’re nearby. And after you power up the park, be sure to hit the portals and use the Pack a Punch. See this guide for more on that very important powerup.

Scattered around the park are vending machines with different powerups in them. Some of these are skippable, but others are very important. Tuff ‘Nuff (found in the back left corner of Journey into Space), and Up N Atom in the starting area are extremely useful, especially if playing solo. Other ones can be useful as well, depending on your playstyle, so be sure to check them out as you explore. Also, if you get souvenir coins, be sure to get them into the machines around the park. Try to focus on one machine, as getting three into it will give you a special item based around the coins you entered.

Don’t Kill Them All

This might seem contradictory to the whole point of Zombies in Spaceland, but you don’t always want to kill all the zombies, in fact…nevermind. Seriously though, if you’re cash rich and wanting to get some new weapons or upgrades, or you just want to explore the park a bit, save one or two zombies. As I said, they are slow, and you are fast. You can just keep running away from them, and then you won’t have to contend with massive hordes of newly spawned zombies trying to murder you all the time. If you take out a zombies legs, causing them to crawl around, then it’s even better. They pose a very small threat to you, but you can take a ton of time to really look around and figure out a strategy.

Watch for Easter Eggs, but Don’t Obsess Over Them

If you’re reading this guide, then you are likely a beginner. Zombies in Spaceland, like other zombies modes from before Call of Duty: Infinite Warfare, has a ton of Easter Eggs in it. You can read about some of them right here. They are all really fun to find and unlock, but since you’re just starting out I’d say not to obsess over these things. Just play the game, trying to survive for longer and longer stretches each time. Once you are more comfortable you can start digging into the Easter Egg stuff.

And that’s it for this Zombies in Spaceland Beginner’s Guide for Call of Duty: Infinite Warfare. Hopefully these tips for how to survive actually do keep you alive for a good, long time. Let me know in the comments if you have any other questions that this, and our other guides don’t answer.

Home / Game Guides / Zombies in Spaceland Beginner’s Guide: Tips for How to Survive