World of Warcraft: Shadowlands Patch 9.1 – Everything You Need to Know about Chains of Domination

All the essential details for WoW's next major content patch. 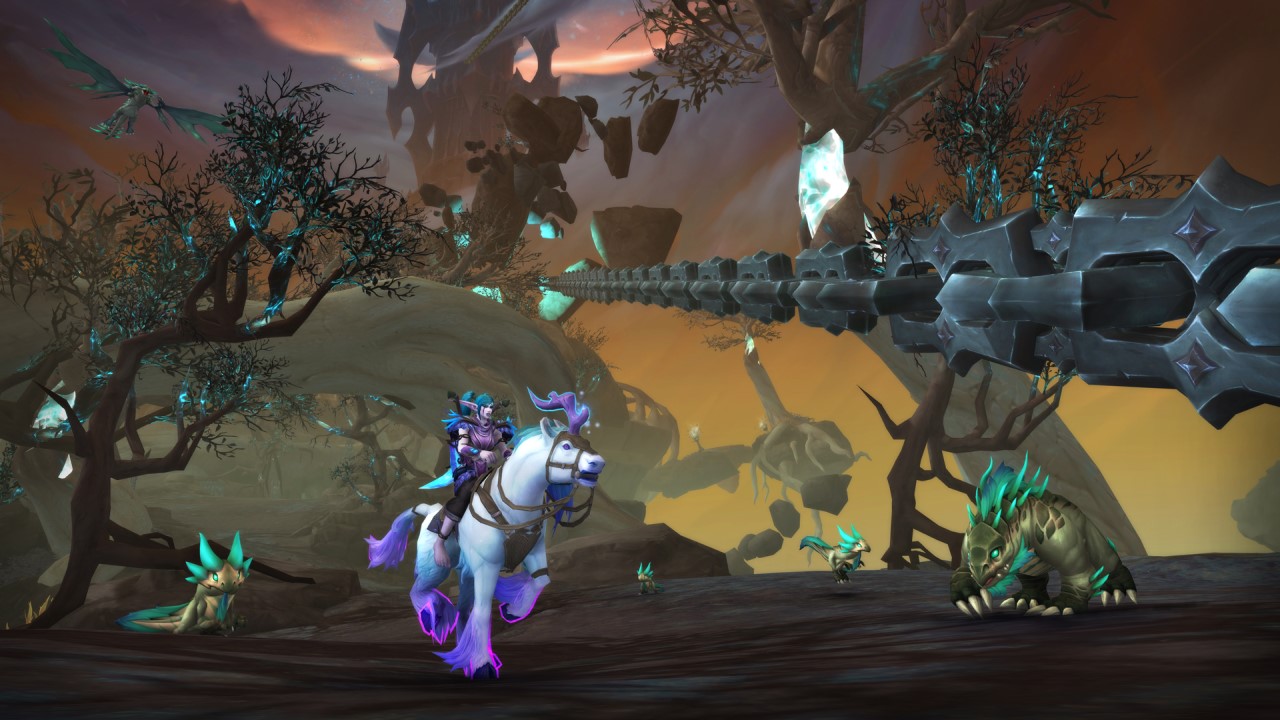 Shadowlands Patch 9.1, Chains of Domination, launches June 29th in NA, and June 30th in the EU.

Shadowlands Patch 9.1, otherwise known as Chains of Domination, will go live June 29th in North America, and June 30th in the EU. Update: servers will be down from 7am PST to 3pm PST. Remember, server maintenance can always last much, much longer. You can preload Shadowlands: Chains of Domination now.

The Maw changes for the better when the new zone, Korthia, arrives day 1.

Korthia, the City of Secrets, is the new playable zone coming in Shadowlands: Chains of Domination. This Patch 9.1 area is nearly as dense as a typical X.2 zone, but it’s actually an expansion of the Maw. Before you grab your pitchforks, understand the Maw is about to become a whole lot friendlier to explore. As a part of the Korthia unlock quest you’ll gain the ability to use any of your mounts in the Maw. During the third Korthia campaign chapter you’ll remove the Eye of the Jailer mechanic from the Maw, meaning you can actually explore the region uninhibited.

There will be two factions within Korthia for players to complete daily quests for: Death’s Advance and The Archivist’s Codex. Increasing your reputation with Death’s Advance will unlock additional Covenant cosmetic options, and you can purchase Korthian Catch-up gear from them. Players looking to upgrade their catch-up gear will want to work with the Archivist’s Codex, who can upgrade the new Korthian Catch-Up gear up to item level 233.

You can read more about Korthia and the upcoming Maw changes over on the official Shadowlands website here. 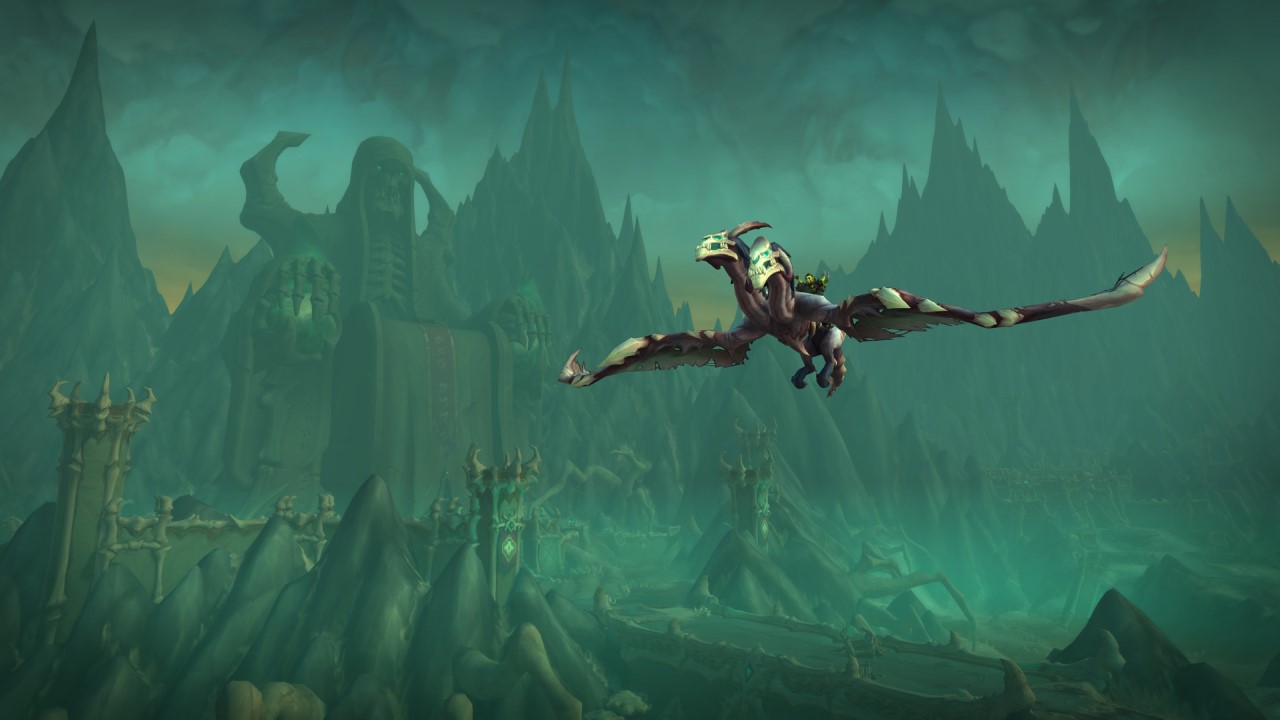 You can finally fly in the Shadowlands the week after Chains of Domination drops.

Those of you tired of navigating the Shadowlands on foot can rejoice: Chains of Domination introduces flying to the expansion, and you won’t need the Pathfinder achievement to unlock it. You need to be Renown Rank 44 to access the campaign quest that unlocks flying in the regular Shadowlands zones (Bastion, Maldraxxas, Ardenweald, and Revendreth), meaning you won’t be able to access flying until the week after Chains of Domination drops at the earliest. It’s account-wide, but a character must first learn Expert Riding to access flying in the Shadowlands.

The new raid, Sanctum of Domination, also debuts during week 2.

You can read a full preview of the raid here, to include a description and image for each boss. 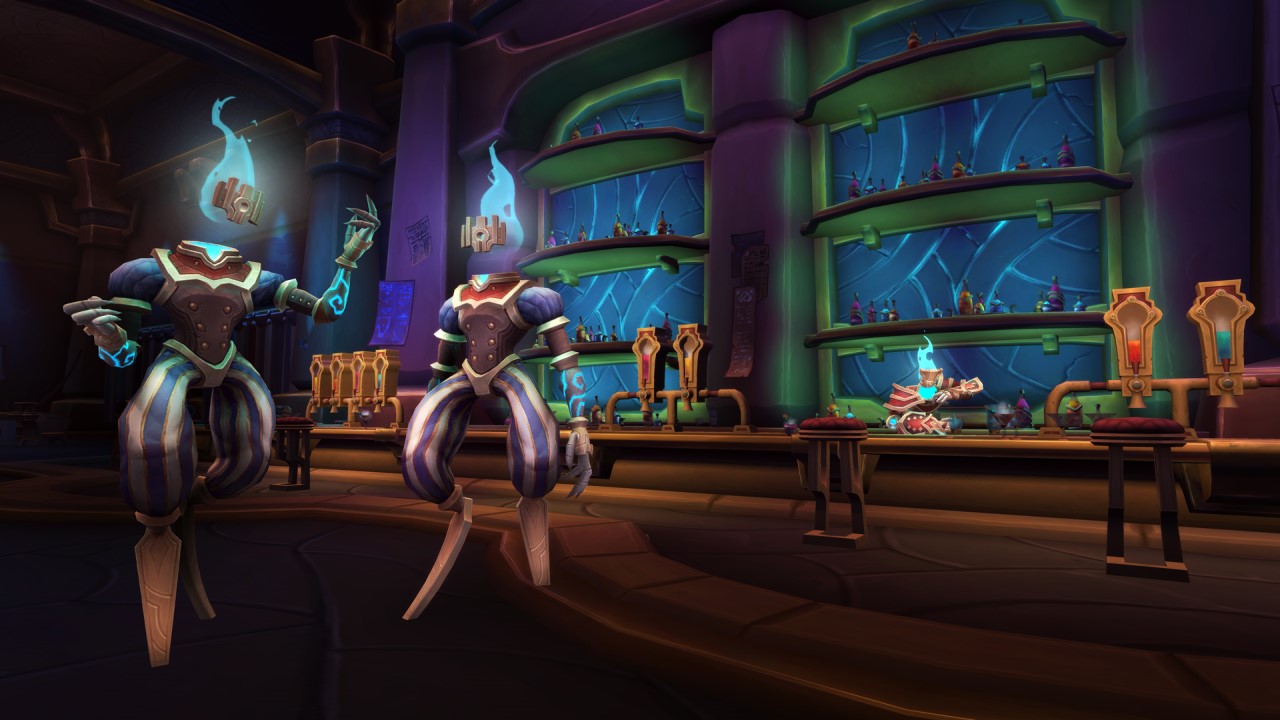 The latest mega-dungeon to arrive in World of Warcraft, Tazavesh, will go live alongside Shadowlands Season 2, which is slated to occur week 2 of Chains of Domination. The dungeon will only be accessible in Mythic difficulty initially, though it will be split into two separate Mythic+ dungeons at a later date. Tazavesh will have a Hard Mode that drops item level 233 loot, a full 7 item levels higher than the regular mode. You can read more about the mega-dungeon here.

Shadowlands: Chains of Domination bakes Raider.IO into the game via the Mythic+ Dungeon Rating system.

In Shadowlands Patch 9.1, Blizzard will add a new Mythic+ Dungeon Rating system. It’s essentially the popular Raider.IO mod, now baked natively into World of Warcraft. Players that partake in Mythic+ dungeons will accumulate a score based on the dungeons they’ve completed and the keystones they’ve cleared. Additionally, completing a Mythic+ dungeon on both Tyrannical and Fortified will provide a massive boost to their score. Because of this, Valor gear upgrades are now tied to your Mythic+ Dungeon Rating.

Players can review each other’s Mythic+ Dungeon Rating within the Premade Groups tab of the Dungeon Finder. Not only will the host’s score be visible for all to see, the host can review the Dungeon Rating of each applicate. This should make it easier for players to form groups that better align with their goals. Finally, whenever someone improves their rating after a run the whole team will receive bonus Valor.

You can read more about the Mythic+ Dungeon Rating system coming in Chains of Domination here. 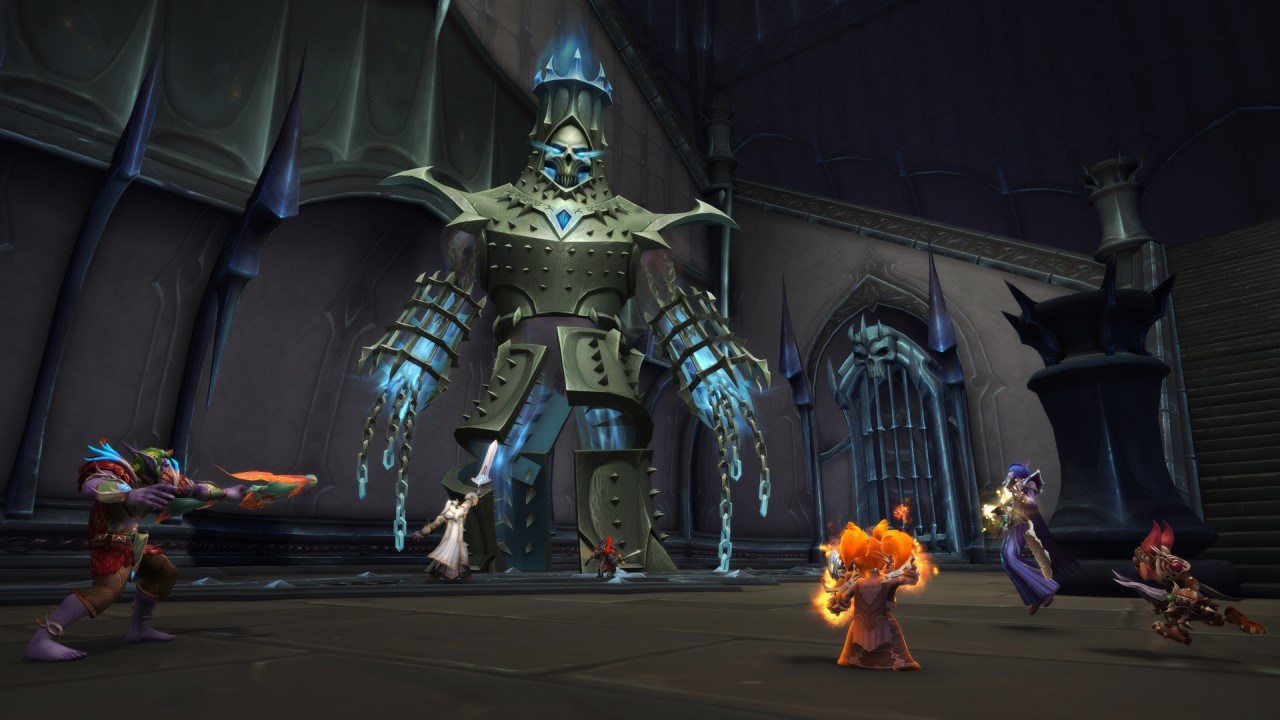 Torghast is getting an overhaul to make it less of a chore to farm.

Alongside the new zone, raid, mega-dungeon, and dungeon rating systems coming in Chains of Domination, there are a variety of tweaks and alterations to existing features in Shadowlands. The most notable are the changes being made to Torghast. No longer will death end your run within the roguelike tower. Torghast will adopt a new score-based mechanic in Patch 9.1, and the faster and more efficiently you clear it the higher your overall rank at the end will be.

To make Torghast less of a choreghast, you’ll earn more Soul Ash from completed layers, and you can double-back and earn more even after clearing a wing. Additionally, there will only be five floors per layer. Torments have been reworked, and will rotate daily across all available wings. Torments will only appear in Layers 6 and above, and they will no longer appear in the Twisting Corridors.

You can read more about the Torghast changes coming in Shadowlands: Chains of Domination via the WoWHead.com article here. 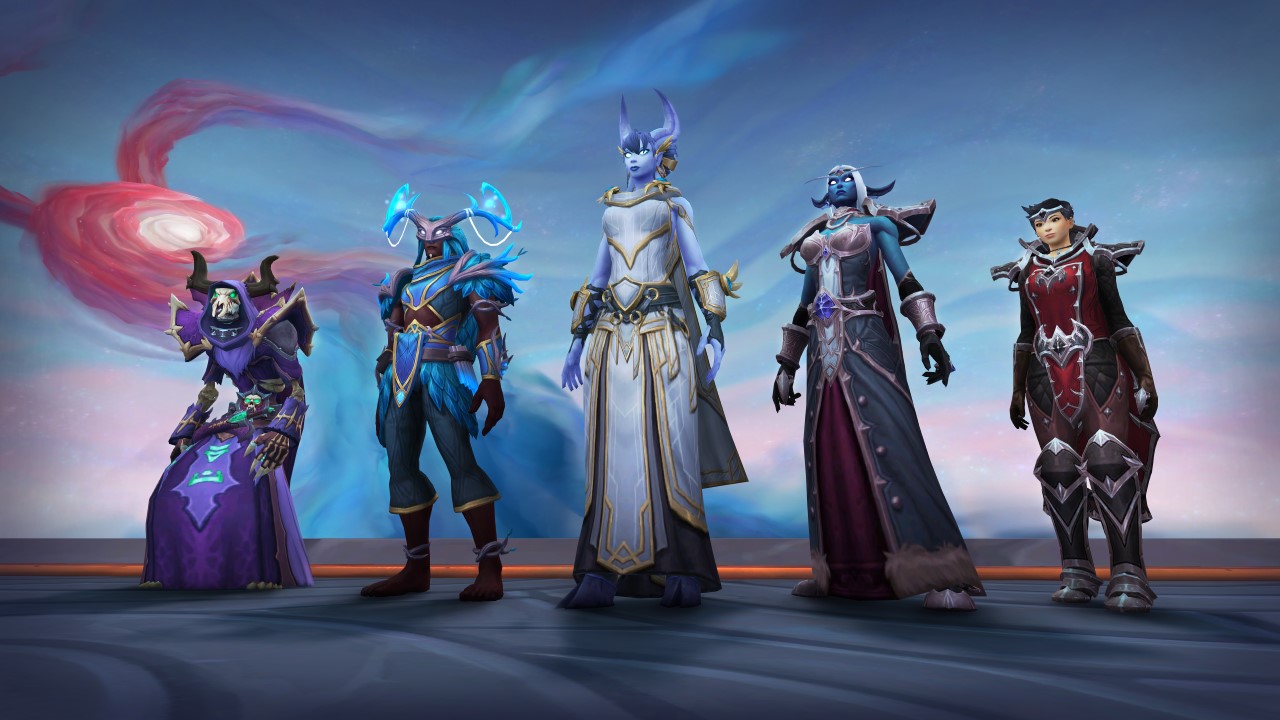 To cap it all off: there will be class rebalancing, a new Shards of Domination system, and more.

As with every major World of Warcraft patch, Shadowlands: Chains of Domination will feature a healthy number of class balancing adjustments. The list is extensive, so if you want to see how your favorite class will change in patch 9.1 check out the class guides over at WoWHead.

There will also be a new system to fiddle with in Patch 9.1: Shards of Domination. Special sockets will appear on Sanctum of Domination raid gear, and players can slot Shards of Domination in them for powerful bonuses only accessible within the raid, the Maw, and Torghast. These are causing high-end raiders some headaches since they only drop on specific types of armor, meaning some classes will have to recraft their legendries to better align with the existing meta.

Of course, there’s far more than all of that coming in Shadowlands Patch 9.1, Chains of Domination. New mounts, cosmetics, pets and rewards will be available, and players can earn another 40 Renown Ranks that will not only carry them through the campaign, but will unlock additional Conduit slots and boost existing Conduit powers.

That’s everything you need to know about World of Warcraft: Shadowlands Patch 9.1, Chains of Domination. If you want to know the more granular details about the patch be sure to head over to WoWHead.com, where the experts there have collected all the data they could from the PTR. In the meantime, set your calendars for June 29th (or June 30th if you live in the EU), when Chains of Domination finally arrives in the Shadowlands.

Home / Original Articles / World of Warcraft: Shadowlands Patch 9.1 – Everything You Need to Know about Chains of Domination