Bravely Default 2: How to Get True Ending

It's time to complete your adventure once and for all. 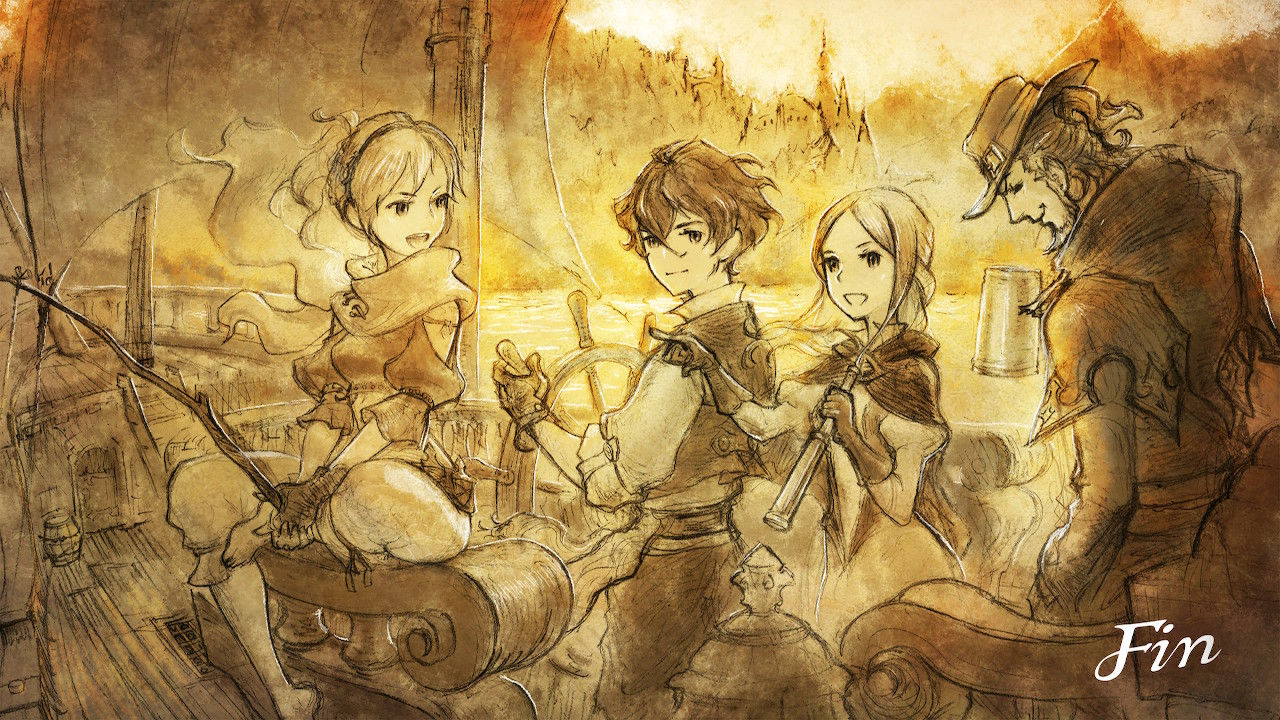 Bravely Default 2 is a long journey, especially if you decide to complete it 100% with its true ending included. As with its predecessors, there are multiple ways of the story to end, with each of them adding a little more to the game’s plot every time. You can of course clear the game once and call it a day, but if you truly wish to see the canonical end to Seth’s and his friends’ adventure, you need to put a little more effort to it. Below, we have everything you need to know as to how to do so, but please be aware that there are major spoilers within the following text, hence a big spoiler warning is needed here.

How to unlock the game’s true ending

To start things, if you reached this part it means you’ve already beaten the game’s final boss, at least once. Edna, Adelle’s sister, is trying to cleanse the world from itself, by simply eradicating everything. For this, she needs the power of The Night’s Nexus, a being powerful enough to help her achieve her ultimate goal. As you would expect though, you stand an obstacle to her desires, eventually defeating her. However, the Nexus is so strong that the only way of stopping it, even if Edna’s physical body is beaten, a sacrifice is needed with someone giving their own life away, in order to use the power of the elemental Crystals. Gloria, is that person, who was already aware that she would eventually need to do this in order to save everyone.

After some cutscenes Gloria is finally vanished, with her life given away for everyone’s good. As everyone mourn her, the game comes to an end, supposedly completing Bravely Default 2 ‘s story. Here is when things start to get interesting. You can of course save your game, but if you load the same save file, a new cutscene appears with hints of what to do in order to avoid having Gloria sacrificing herself. You end up being at the same room right before the last boss, but this time, you can choose to go back instead of forward, so you will trigger the beginning of the next chapter, Chapter 6. 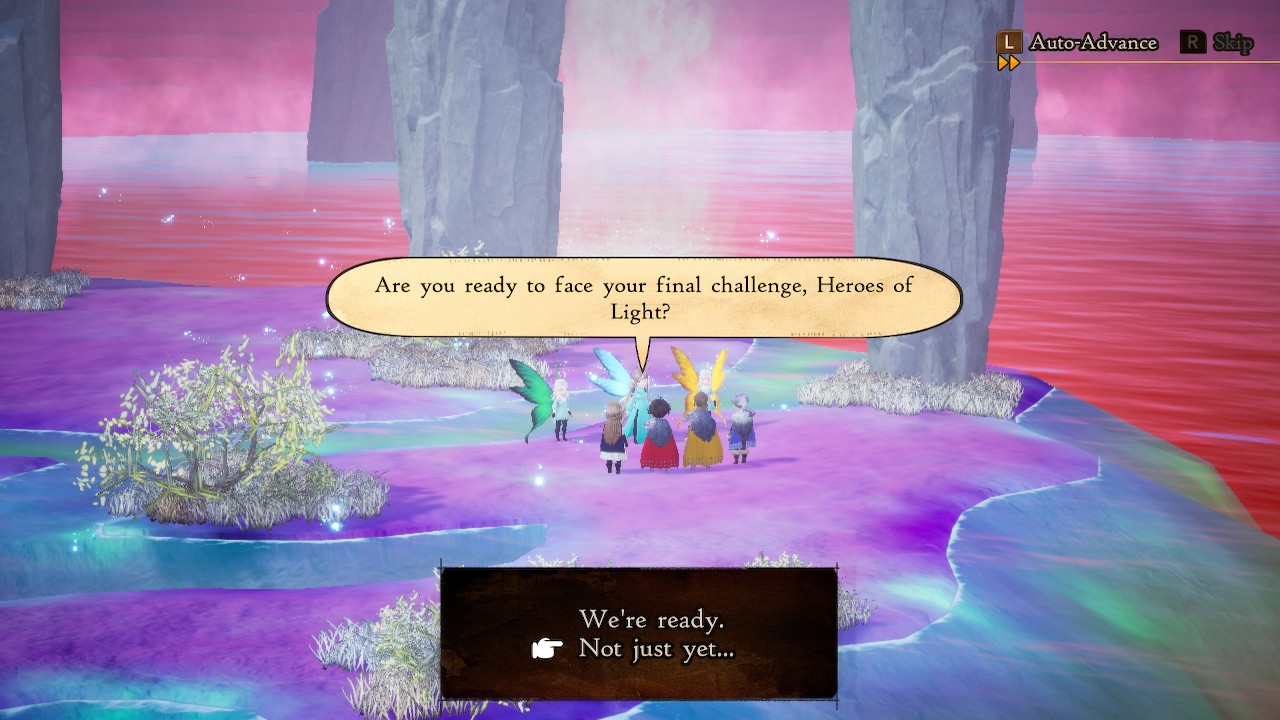 With Gloria now intact, you start a quest of heading to Mag Mell, the very own village of the Fairies. You do this since Adelle herself mentioned that they could have some additional knowledge as to how to defeat the Nexus, without sacrificing anyone. To keep it short, just follow the game’s and Adelle’s guidelines to look for it, by visiting Wiswald Woods.

After you do, you finally unlock the very last city of Bravely Default 2, the before mentioned Mag Mell. Not only it has the best weapons you can buy in the game, it also homes some new side quests, and one more dungeon to explore, a very pretty one that is. Esmeralda, the current queen of the fairies, instructs on your next step and guides you through that last dungeon. After you reach the very end of it, Esmeralda is there and waits for you in order to help you with your last battle against The Night’s Nexus’s actual core, and not the vessel Edna. After your eventual triumph against the Nexus, a new cutscene unfolds, and it is now without a doubt that this sinister being is simply too strong for you to be able to actually defeat it. Therefore, Esmeralda and the whole fairy community, decide to lock this place in time in order to trap Nexus inside. This way, while it will not be defeated, it will at least remain locked unable to harm anyway anymore. As everyone agrees and they run for the lives, Adelle decides to stay within the village with the rest of her kin. Elvis being hesitant to leave her behind, things eventually end with Gloria this time alive, but Adelle is forever gone, trapped inside her home with the rest of the Fairies and The Night’s Nexus. Another sad ending for our company, although an ending still. 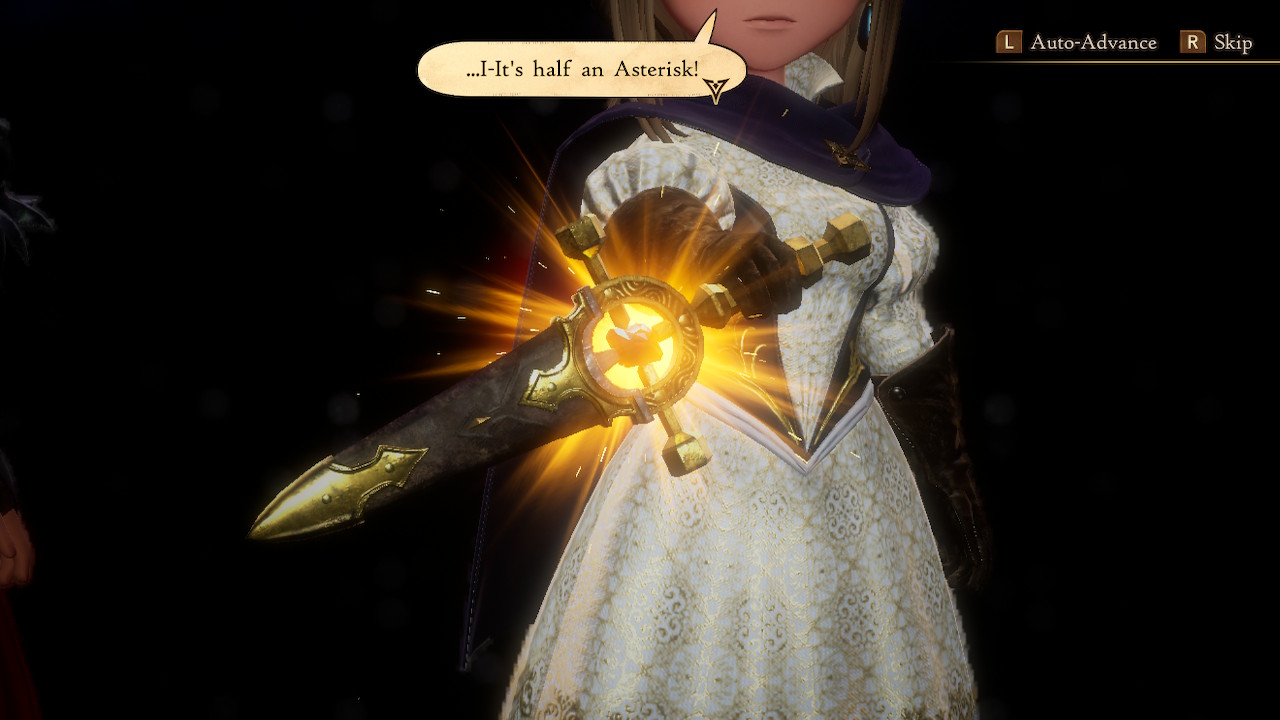 Finally, we reached the last part were things get really interesting. There is one more ending you can unlock, which is the true, complete one. As before, reload your save file. Again, certain new story events take place and you now get a glimpe of Sir Sloan’s Asterisk, the Bravebearer Asterisk, which broke in half after his fight with The Night’s Nexus fifty years ago. You need to visit his grave back in the Vale of Sighs, where the fateful battle with Adam took place. Then, a cutscene will begin with Sir Sloan’s ghost explaining everything, and you even have some flashbacks that give even further insight to the whole plot. Eventually, you end up having a battle with Sir Sloan’s younger’s self, to prove your worth and claim the other half of the Asterisk, as you already owned part of it. It was inside Sloan’s sword all this time. With the complete Bravebearer Asterisk, you now need to fulfil one last requirement. You need to own every other Job in the game, including the two optional ones. We have a complete guide for each of them, so if you need help with the Gambler Asterisk, take a look right here in this article. In case you need guidance with the Salve-Maker Asterisk, here is everything you need to know as well.

As you complete the whole Job roster, here is the trickiest part of all. It took me a while to figure it out, as I wasn’t expecting this at all. Simply put, open your save menu. Exactly where you’ve been saving the game manually all this time. If you take a look at the bottom, you will be able to see a sinister purple icon. Just click on it, and the next story events will continue. You will end up getting some hint that you need to visit the boat lady you first met when you started your adventure. Therefore, head to Halcyonia and talk to her. To avoid any other spoilers, I would advise to continue everything here on out on your own, as it is straight forward, and you will end up facing against the last boss of the game, The Night’s Nexus true and final form. Beating the Nexus, finally reveals the game’s true ending, giving an end to this grand adventure. There are of course many things you could still do, as to chase the game’s new Trials or complete every side quest, if you haven’t already. The B’n’D mini-game is another section at each own, so as you see, there is still much more content you can cover other than getting the canon ending of Bravely Default 2. As far as Seth and his tale go though, everything is finally complete.

Home / Game Guides / Bravely Default 2: How to Get True Ending