In Destiny 2 Season of Plunder, you will receive Small, Medium, and Large Treasure Beacons by ranking up at the Star Chart. These Treasure Beacons will start the Cryptic Quatrains quests which are mini treasure hunts based on hints in a story. Here is how to solve all Cryptic Quantrain riddles and collect all the Buried Treasure in Destiny 2.

After you have reached rank 7, you can collect the Small Treasure Beacon from the Star Chart. Upon collection, you’ll receive Cryptic Quatrains 1. There are four riddles that you need to solve to get to the Buried Treasure.

“My story begins as I hide from the crews / They search and will find me unless I hide soon / I’ll wait on the nightfall, the cleverest ruse / And force them to hunt by the light of the moon.”

In order to decipher all of the Cryptic Quatrain riddles, focus on the orange words which are highlighted here. This first riddle reads, “Begin search on moon.” Simply land on the moon to get the next riddle. “Behind in the harbor, their sorrow was real / They lost what I’d taken, me heart filled with fear / From cruel revelation the dawn would reveal: / A chest, broke and barren, and me nowhere near”

After deciphering the riddle, it reads, “Harbor sorrow lost revelation chest.” With this, travel to Sorrow’s Harbor and complete the Lost Sector called K1 Revelation. Open the chest and you’re on to step 3.

“My eyes toward the cosmos, I let out a sob / I begged to the gods and the fallen alike / By bullet or saber, I’d fall to the mob / But please, let me deal them a palpable strike”

This riddle reads, “Cosmo fallen saber strike.” By piecing the puzzle together, you need to complete the Fallen S.A.B.E.R. Strike on Cosmodrome. 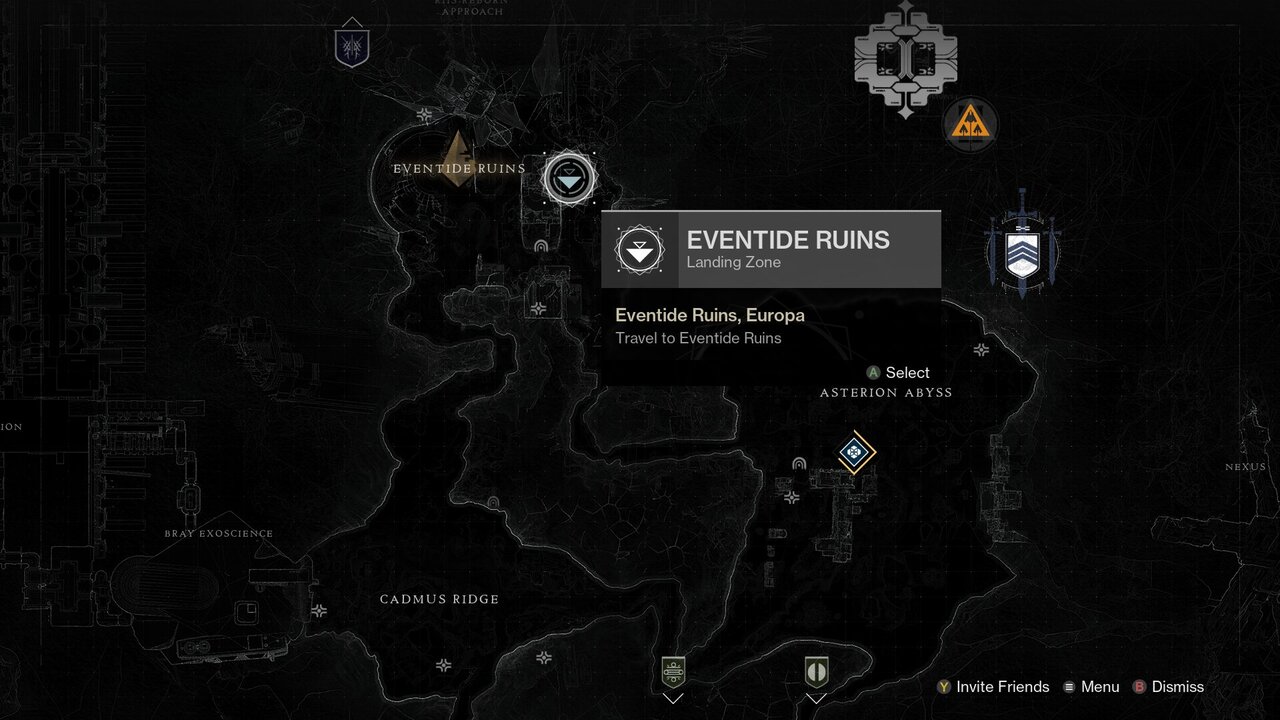 “The winds of Europa were frozen and white / And even the tides had been stopped by the cold / The hook would swing empty, I’d not die tonight / By cranes they’d be searchin’, but I’d keep me gold”

The last piece of Cryptic Quatrains 1 reads, “Europa even tide hook cranes search.” Travel to Eventide Ruins on Europa. Once there, go to the most northern section where the cranes and hooks are. In the snow, behind the big rock, you’ll see a mound with a green x marks the spot. Interact with the spot and you’ll receive loot, map fragments, and the first piece of the Crude Cipher Fragment. 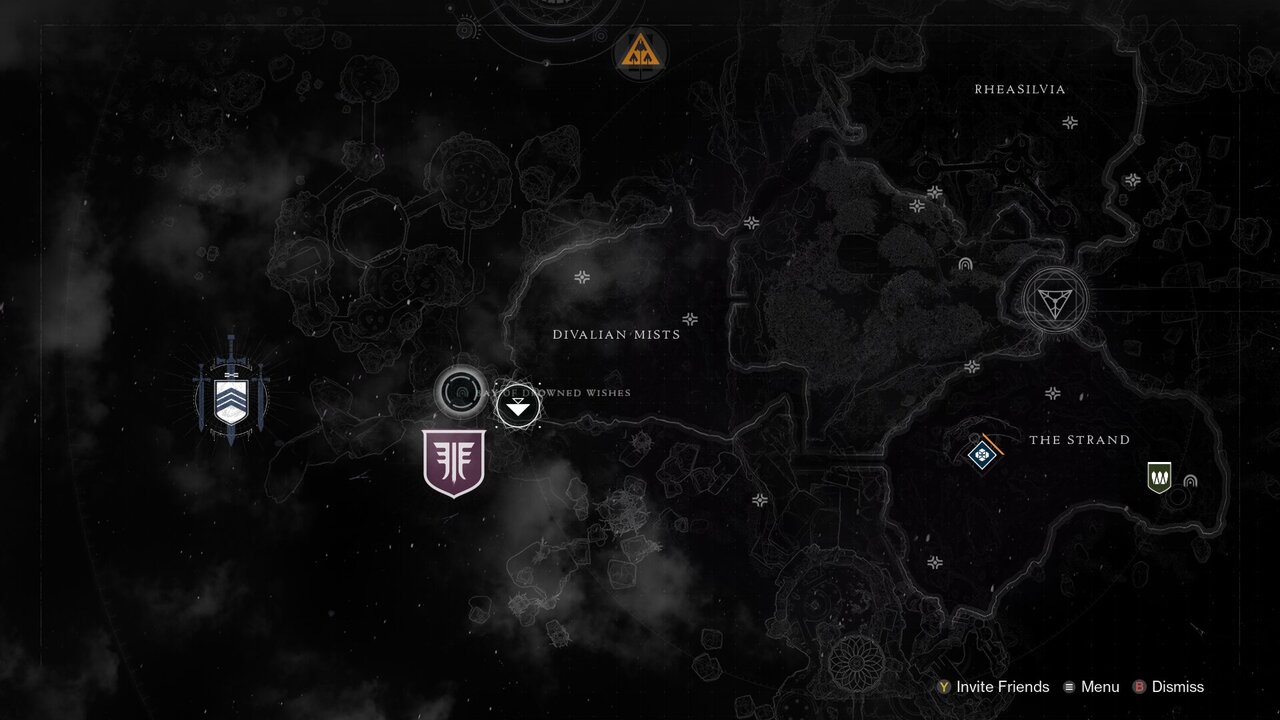 “The bay filled me chest, although drown I did not / I coughed and shivered me way through the mist / They dreamed I was lost, my sad scarper for naught / Yet all that I wished for was tight in me fist”

The first Cryptic Quatrains 2 riddle reads, “Bay chest drown mist dream lost wish.” This one can be confusing, but you need to go to the Bay of Drowned Wishes Lost Sector in the Dreaming City. After completing the Lost Sector and looting the check, you’ll get the next step.

“I swore I was dead at the shore of the lake / Their shadows stretched long as they searched the debris / But though they did strike out at me and me take / Their words found me ears, but they didn’t find me”

This riddle reads, “Dead lake shadows strike.” Travel to EDZ and complete the Lake of Shadows Strike. With that done, you’ll get step 3.

Step 3 of Cryptic Quatrains 2 reads, “Expedition sword wield.” All you need to do for this riddle is complete an Expedition with a sword equipped. 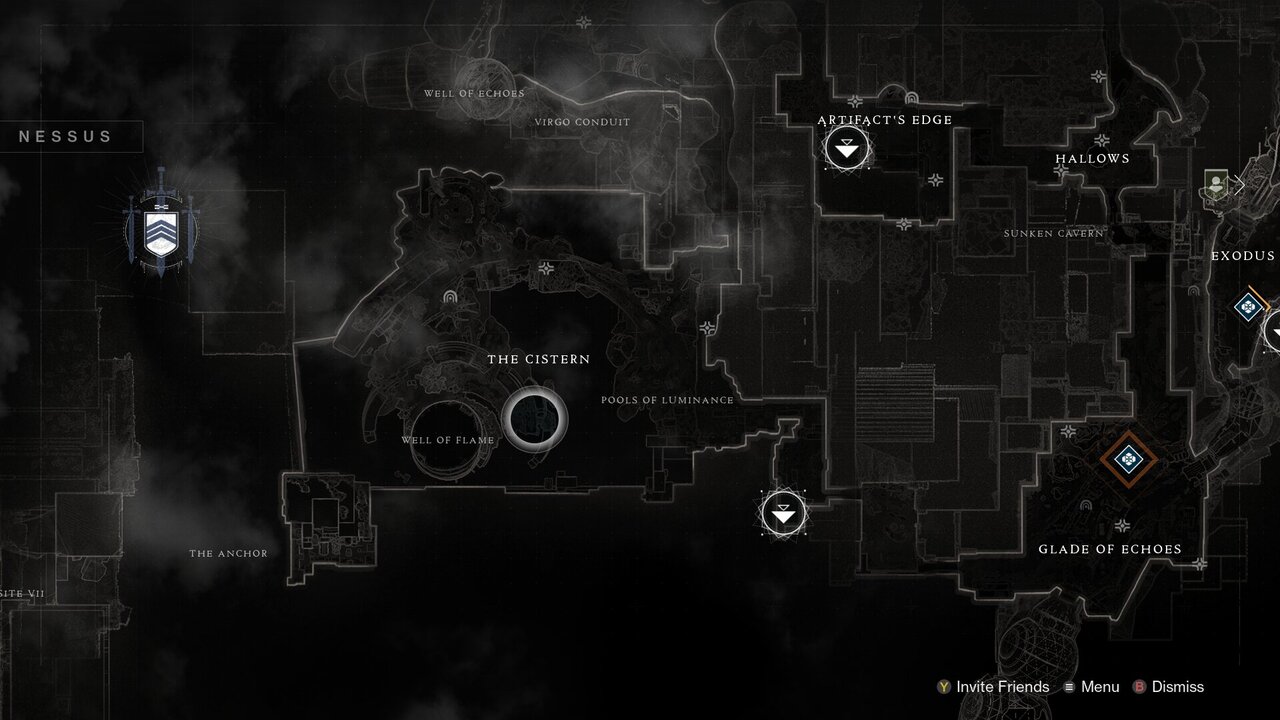 “The red ground of Nessus would soon be me grave / A column reached high into alien hue / Through cistern did beckon, no water it gave / At pyramid’s imprint, I sought to pass through”

The second to last step of Cryptic Quatrains 2 reads, “Nessus column cistern pyramid’s imprint pass through.” For this one, travel to Nessus and climb up the east side of the Well of Flame which is in The Cistern section. Enter in through the door and you’ll find a treasure pile that will give you the last step.

“Me crewmates were nearing, t’was just as I feared / And terrible fluid did fall from the sky / I fancied I noticed, beyond broken sphere / A place that was safe for me treasure and I”

The last step of Cryptic Quatrains reads, “fluid did fall from the sky broken sphere treasure.” This is by far the most cryptic message, but simply travel to the northernmost part of the Cistern. On the shore, behind a rock, in the area where the Cabal Drill public event happens, is where you’ll find the treasure.

After you have reached rank 16, you can collect the Large Treasure Beacon from the Star Chart. There are 7 steps in this one; let’s get started. 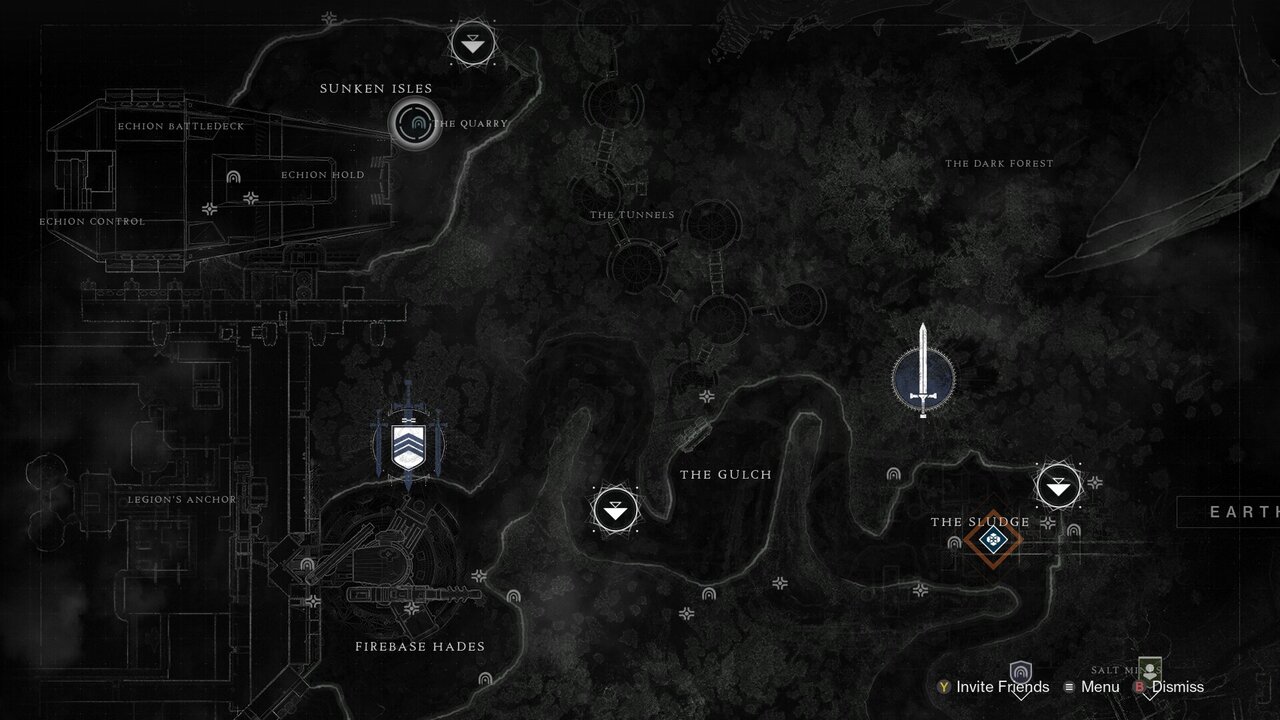 “…was I still alive? Still not dead, as I dreamed? / Me treasure not sunken, not lost in the deep? / They’d caught not their quarry, I would be redeemed / And bury me knife in their chests while they sleep”

The first riddle for Cryptic Quatrains 3 reads, “Dead sunken lost quarry chest.” This one is prompting you to get the chest at the end of The Quarry Lost Section on EDZ.

The second riddle reads, “Crash exodus one life to live.” For this riddle, you need to complete the Exodus Crash Strike on Nessus without dying. Once that is done, you’ll get step 3.

“They cursed as their catch crashed away through the trees / I moved as if lightnin’ did arc through me bones / I felt like the maker had answered my pleas / While handy with cannons, they left ‘em back home”

The third riddle reads, “Catch crash lightnin’ did arc through me bones hand cannon.” This one is telling you to complete a Ketchcrash activity with the Arc subclass and a hand cannon equipped.

The fourth riddle is a bit different; it reads, “Atlas crude cipher two beacons.” You need to open your Captain’s Atlas and use both of the Crude Ciphers you obtained from Cryptic Quatrains 1 and 2 to create the Crude Cipher.

“I crept out at dusk, left me treasure behind / And found me old crew and the captain as well / I’m light with a blade and me right hand’s unkind / They’ll find their salvation dead-center in hell”

With the Crude Cipher completed, you need to slot the correct Sigils. This riddle reads, “Dusk left light right salvation center.” After following the instructions, you need to do the following:

“The cosmos had set me ashore, I was free / Forgotten at last, me heat empty of hate / On deck of the vessel that pointed to sea / I leaned on the mast and awaited me fate”

With that done, step 6 reads, “Cosmo shore forgotten vessel that pointed to sea mast.” For this one, you need to travel to the Cosmodrome and visit the ship south of Veles Labyrinth. Here, you’ll find a treasure mound. 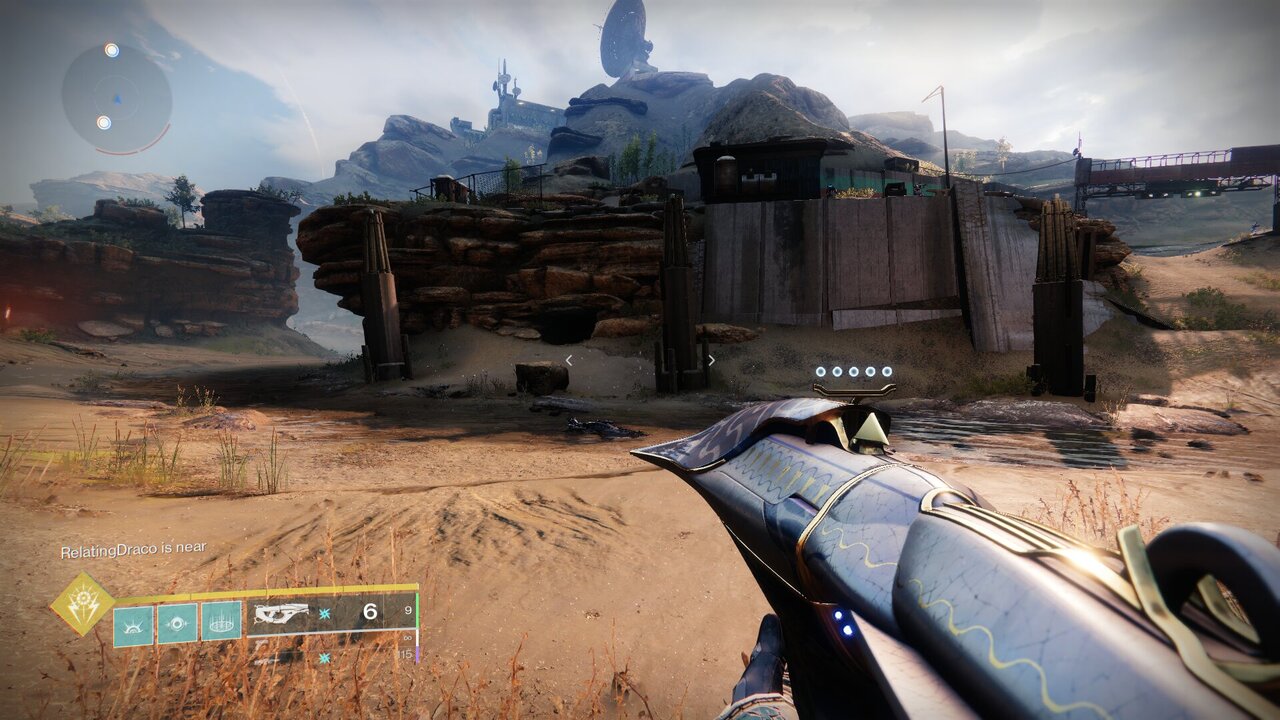 “I took all I had, placed it safe in a cave / Where stream joins its mother by pillars of three / It’s yours if you like, for you’re clever and brave / You may find me treasure… but never find me”

For the last step of Cryptic Quatrains 3, the riddle reads, “Cave stream joins its mother pillars of three treasure.” This last riddle is by far the trickiest, but it isn’t too bad if you know where to look. Simply head to the big destroyed ship. If you look at the cliff, you’ll see three pillars with a cave between the two on the left. Enter the cave and dig up the last Buried Treasure.

As your reward, you will get the Charge of Light Exotic Sparrow, Season of Plunder loot, and the Beacon’s Guidance Triumph. If you’re looking for more Destiny 2 guides and news, check out our Destiny 2 page.