The Olympics of Destiny: Warlocks and Titans and Hunters, oh my. Destiny 2‘s Guardian Games is now live for Season of the Worthy, and it’s free for all players who are Power level 770 or above, regardless of Season Pass status. The Olympics-themed seasonal event will divide Guardians into their three class-based groupings, Warlocks, Titans, and Hunters, who will compete to win rewards for their team and prove their class most worthy of victory.

The winning team will get a statue representing their class, which will be located next to Zavala for the rest of the year. The Guardian Games begins on Tuesday, April 21st and will play out for three weeks until the reset on Tuesday, May 12th.

Bungie has placed a weight system on the classes to account for the fact that there tend to be far more Hunters than Warlocks or Titans who comprise the Guardian population at any given time. Weighting the amount of medals submitted by each class in closer proportion to team populations helps to ensure fairness across teams.

To get into the competition, Guardians will need to visit seasonal event vendor Eva Levante at the Tower to equip their class item and complete the introductory quest. Then they may purchase bounties and medals that can be completed to win points. Once these points are earned, they will need to be deposited into the Tower Podium to add to the daily score of a Guardian’s class.

Guardians can pick up laurels dropped by other players in Guardian Games activities to complete medals and further improve their team’s score. Laurels will come in the form of drops in all activities with the exception of Crucible and Gambit, which will award players with laurels upon match completion.

Note: Laurels must be picked up in-game to count; they will not be sent to the Postmaster for storage if not recovered manually.

At every daily reset, Guardian Games class items will change color to reflect the rank each Guardian class has placed in–right up to that daily reset. The colors are gold for first place, silver for second, and bronze for third. Warlock Bonds, Titan Marks, and Hunter Cloaks are the gear items that will change to these colors to reflect such rankings. At the end of the seasonal event, each Guardian’s class item will be locked for the rest of the year to the color that represents each Guardian’s final class ranking.

The first class item should be purchased from Zavala after first accepting Eva Levante’s introductory quest. He will offer one of each energy type–you may want to choose one with a higher Power level. Additional Bonds, Marks, or Cloaks of the other energy types can be purchased from Eva Levante at 1,000 Glimmer per item. Guardian Games Rewards

To add to the ranked class items, Guardians can also earn other rewards from this event, including daily offerings and four new Exotic rewards.

Guardians will receive daily reward packages for helping their team progress towards victory. The better a Guardian’s class performs, the greater the rewards that Guardian receives.

The Heir Apparent Exotic heavy machine gun features the Heavy Slug Thrower Exotic intrinsic, which means it can only be fired after being fully spun up. While this may not sound like much of a perk, it could mean that the gun is so powerful, Bungie had to find a way to balance it. It also comes with the following features: 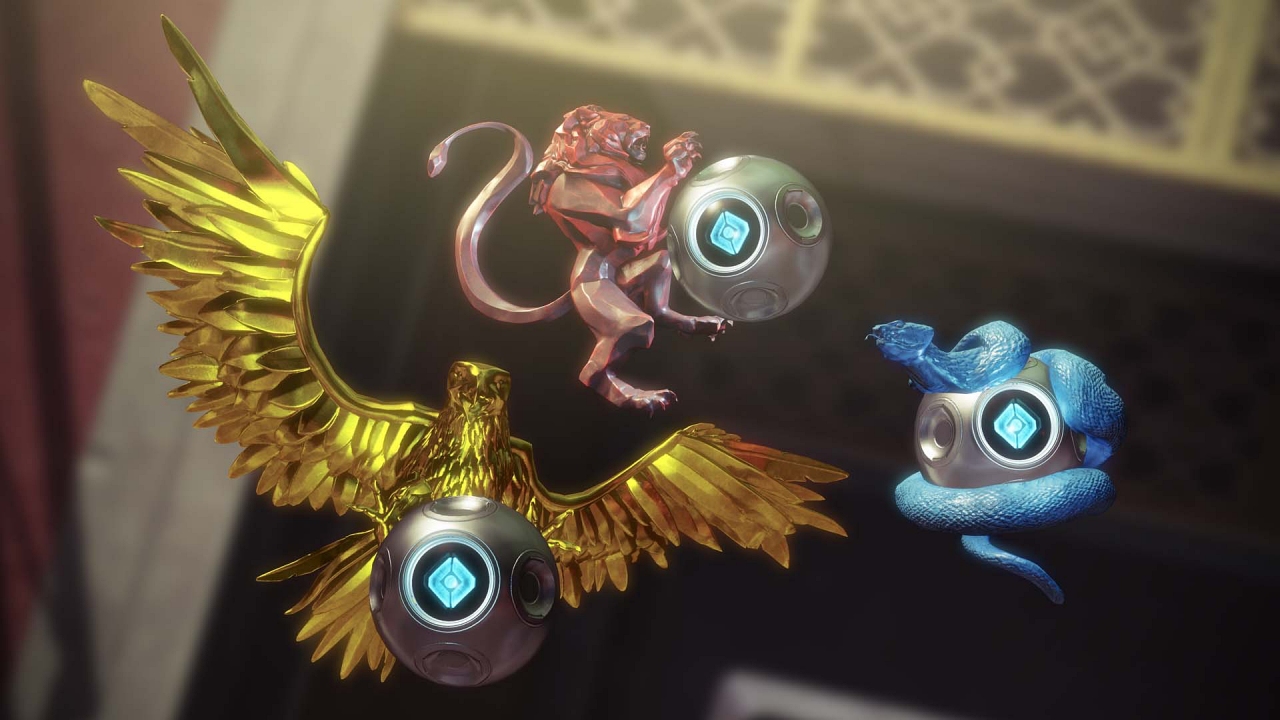 Each of the three exotic Ghosts shown here can be earned by completing each of Eva Levante’s weekly exotic quests over the three-week duration of the Guardian Games event. Players do not need to switch to other Guardian classes to acquire all three.

In addition to the four exotic rewards mentioned above, players can also purchase Guardian Games-related cosmetic items from the Eververse store. All but one of these items will be available for purchase with Bright Dust, though there is a finisher item that will only be available for Silver. Tess’s offerings also include the armor ornaments featured in the title image of this post.