You need to master this activity if you plan to buy everything on offer in the Xiao Market. 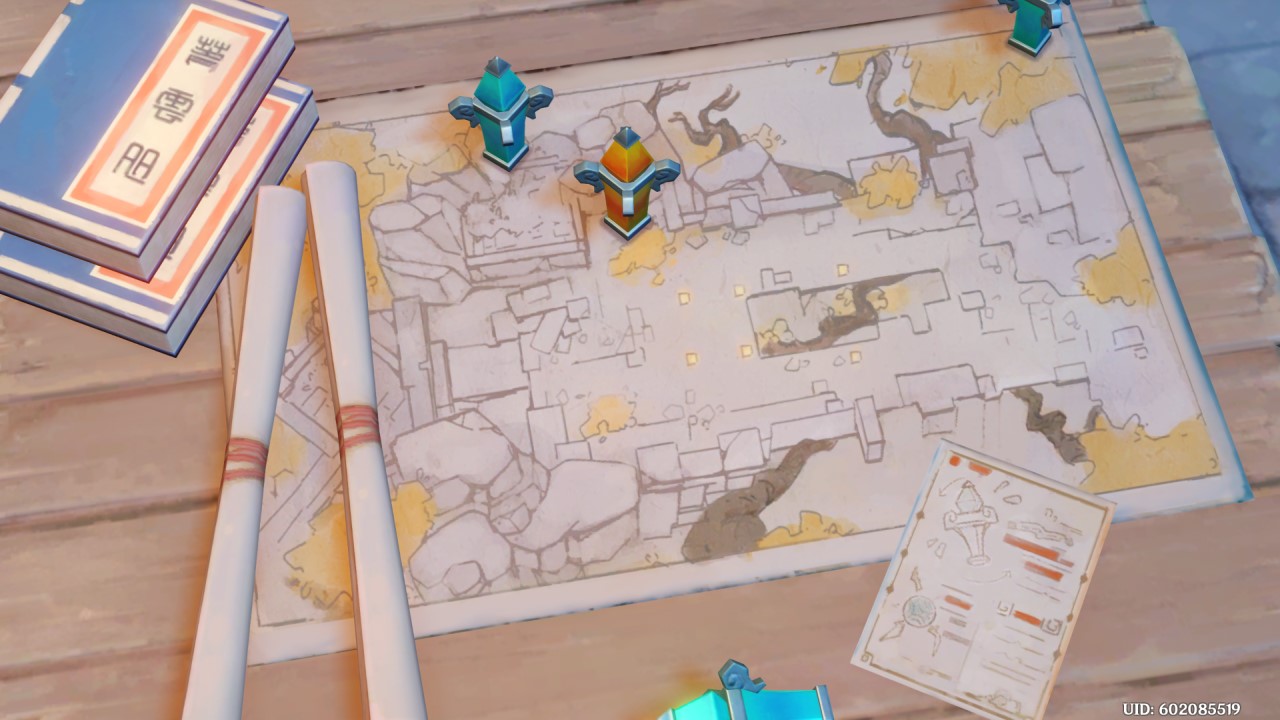 The Lantern Rite event in Genshin Impact has a new activity – the Theater Mechanicus – and it’s how you’ll earn the event currency, Peace Talismans. If you want to grab everything available in the event shop and a free character you’ll want to participate in this tower defense minigame. Don’t fret if you’ve never played a tower defense game though; Theater Mechanicus is relatively easy to understand and learn.

The Theater Mechanicus activity in Genshin Impact is a tower defense-style minigame, meaning you need to set up elemental Mechanici to stop waves of enemies from escaping the stage. You continue to control your characters while within the Theater Mechanicus arena, but your attacks will deal no damage, and you won’t generate any energy for your Elemental Burst (a bug aside). What you can use, however, are your Elemental Skills.

The general flow of Theater Mechanicus is simple then: build Mechanici towers to damage enemies and trigger elemental combos, and use your own Elemental Skills to trigger additional combos and to control the field. There’s more to this activity than that – obviously – but, you won’t have to have a full squad of max-level character to tackle all the challenges on offer here.

Theater Mechanicus can be played either solo, or with one other person in coop. You can either enter with a friend already in your world, or you can utilize the matchmaking feature baked into the Theater Mechanicus menu. Rewards are unique between players, so you don’t have to worry about splitting your earning with your partner. There is a penalty for abandoning your partner mid-match, and you’ll have to wait until you can play Theater Mechanicus again if you do so. 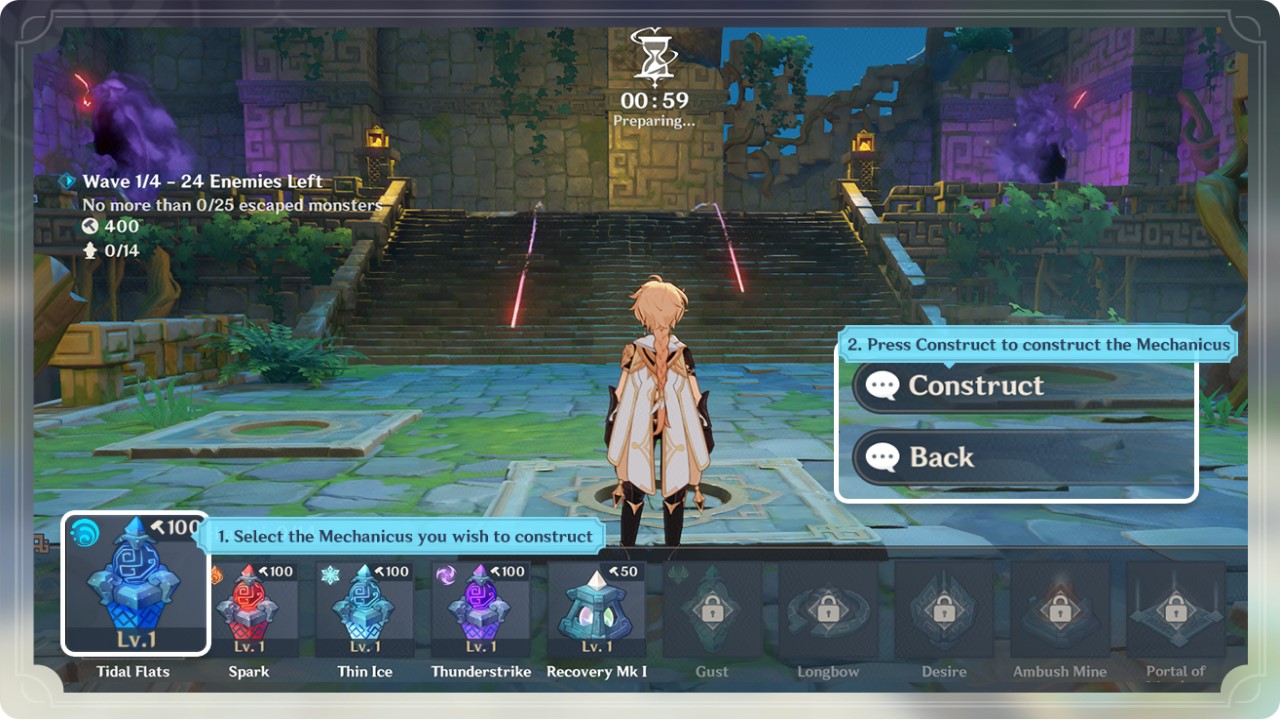 In any given Theater Mechanicus stage there are nodes where you install Mechanicus towers, and it’s on you to figure out what towers work best in what locations. Before every wave you’ll be given a quick brief of what enemies will appear (you can review this at any time t00), and you’ll want to set up your Mechanici in such a way that prevents the enemies from escaping the arena. The purple portals they spawn from will be visible in both the overview map and on the field, and the route enemies will take will be traced by a red/blue light on the ground towards the blue exit portal.

At the start there are five Mechanici you can deploy – a Pyro, Electro, Hydro, and Cryo tower, and an AoE “Recovery” that will boost your Veneficus Points gained from enemies slain in the AoE. Each tower costs a set amount of Veneficus Points to deploy, and you gain more by killing enemies. Essentially, as you kill foes you can build additional towers to better bolster your defense.

There is a catch though: there’s a limit to how many Mechanici you can deploy on the field. If you want to swap a tower out for another, or clear a space out for a more optimal location you will only be refunded a small portion of the Veneficus Points you spent. You need to choose your towers and positions wisely, lest you find yourself short on Veneficus Points and unable to stop enemies from escaping. Better yet, the number of towers that can be deployed and total Veneficus Points available to spend are shared between players in coop, so you will want to communicate your plans with one another.

Between waves you’ll have a selection of Mystic Arts to choose from, and the majority of these will also cost Veneficus Points. These are modifiers that can boost a particular Mechanici’s power, grant you additional Veneficus Points, or generally make your life easier. There are some that will come with potent penalties, but in turn you’ll either own more Veneficus Sigils at the end of the activity (“Fearless”), or will provide a substantial buff if you can overcome the hidden random penalty (“Fickle”).

You have 30-seconds between waves to choose your Mystic Arts, though you are free to not choose any if you want to hold on to your Veneficus Points for the upcoming wave. There are different challenges associated with each stage and difficulty, and the more your complete the more Veneficus Sigils you’ll earn upon completion. These are critical, since they are used to level-up your Mechanici outside of the Theater Mechanicus. 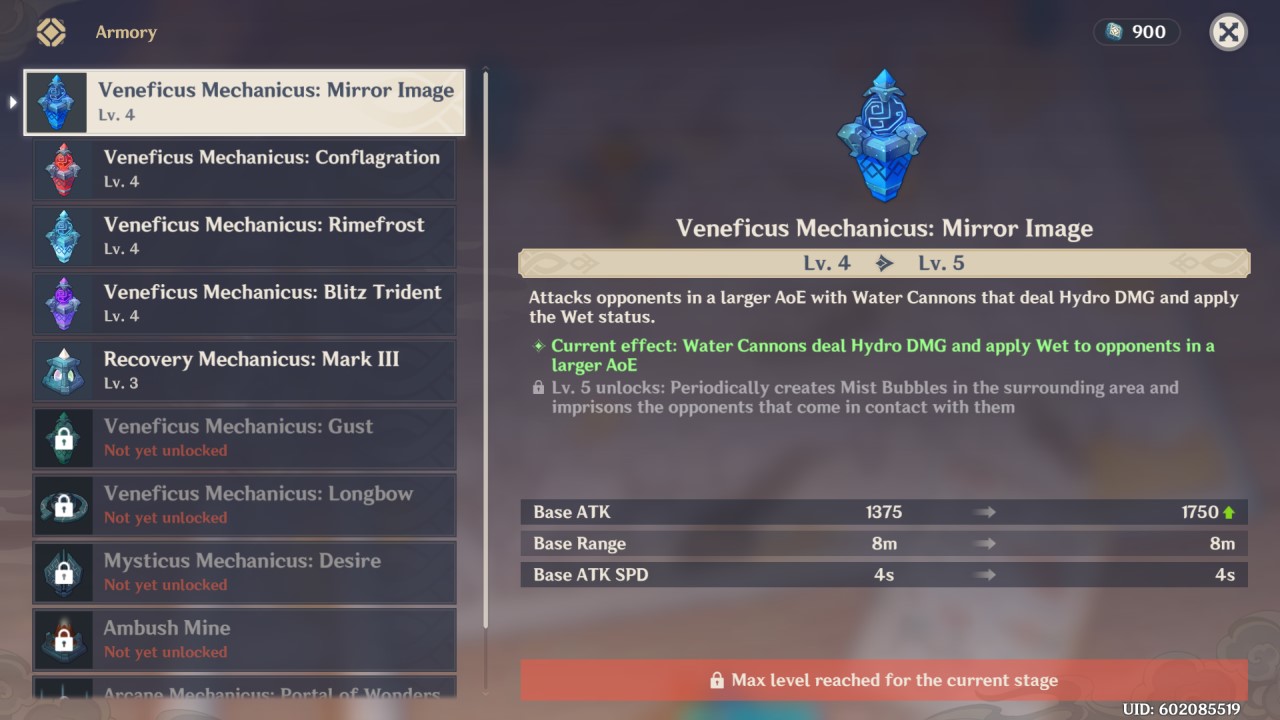 Veneficus Sigils, Leveling your Mechanici, and Progressing in Theater Mechanicus.

Veneficus Sigils are an activity exclusive currency earned from completing challenges within the Theater Mechanicus. These can range from not allowing enemies to escape the arena, to slaying a specific number of foes with your Mechanici. These challenges reward a set amount of Veneficus Sigils, which can be previewed from within the Theater Mechanicus page (Stage Features > Challenges).

Veneficus Sigils are used to level-up your various Mechanici towers. They’ll hit harder, cast further, and add some potent passives to their kit. To overcome later stages and higher difficulties of the Theater Mechanicus you’ll have to level-up your Mechanici, yet there’s a few things to consider.

The Theater Mechanicus has a handful of time-gates attached to it, to include the highest level your Mechanici can reach at any given time. The full time gates are:

Each stage is unlocked 24-hours after the last, though you’ll need to reach Festive Fever ranks “Guests Flock From Afar,” and “Glow of a Thousand Lanterns” prior to unlocking stages 4-5 and 6 respectively. This is done by completing side quests in the Lantern Rite Tales.

Higher difficulties come with an increased multiplier for better Veneficus Sigil gains, though you’ll need to keep leveling-up your Mechanici to match the rising challenge. The Sigil cap is only for how many Sigils you can hold at a time, not how many you can earn a day. You are free to farm as many Veneficus Sigils as required to fully level your Mechanici each day.

To earn Peace Talismans you’ll need to complete the general Theater Mechanicus challenges attached to each stage. There are three pages of challenges, each unlocked by reaching a specific Festive Fever rank. You can read a full break down on how to earn Peace Talismans here, but to summarize it in this guide: you’ll need to clear stages at each difficulty, reach a set amount of points in those difficulties, level your Mechanici, and clear stages without letting any enemies escape. 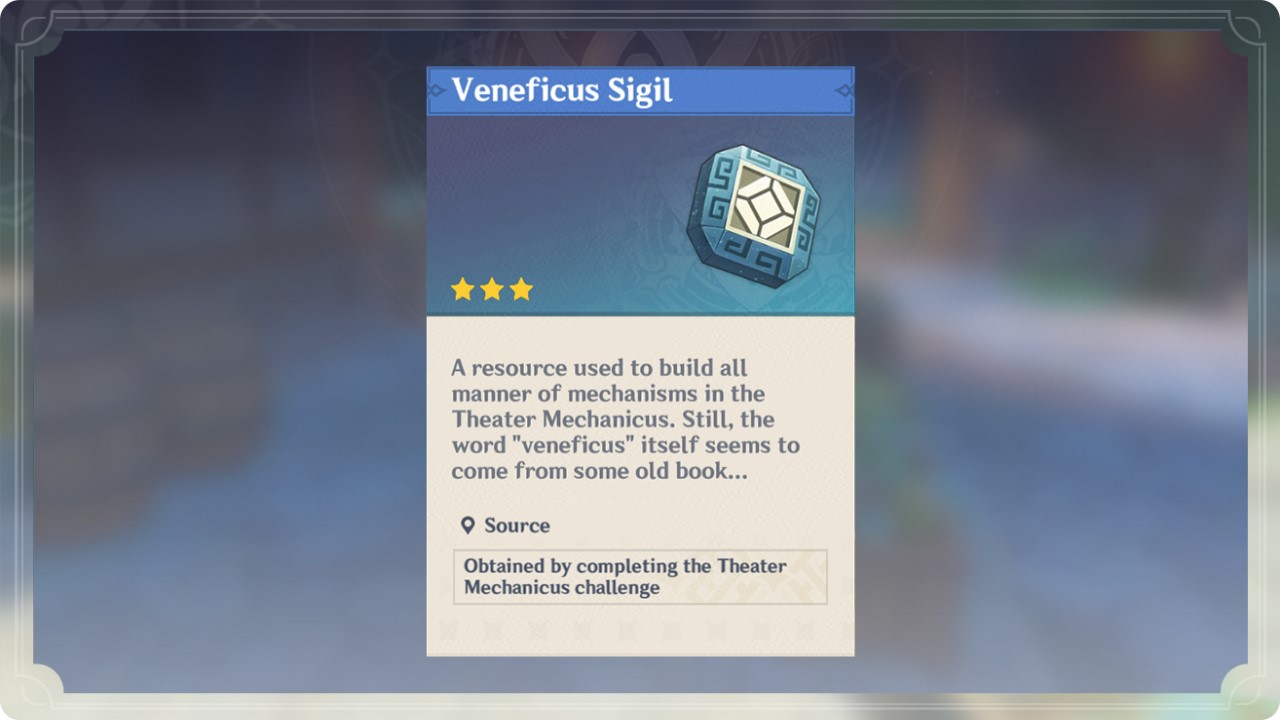 The Theater Mechanicus follows a basic principle: line up powerful elemental combos to generate massive amounts of damage. That said, crowd control is absolutely critical, but you can’t solely rely on the Cryo and Hydro towers to hold down enemies since towers have brief cooldowns between their attacks.

This is where your team composition will come into play. Since levels don’t really matter in Theater Mechanicus, you’ll want to bring in four characters (or two if playing in coop) that excel at locking down enemies alongside triggering elemental combos.

Anemo characters are excellent at knocking enemies back, and having a Cryo character on hand means you can freeze any enemy soaked by your Hydro towers without having to wait on the Cryo tower to come off cooldown. Additionally, characters able to “block” the lanes enemies follow can stall them and leave them in range of your death-dealing Mechanici towers.

My recommended team composition for the Theater Mechanicus is thus: Geo Traveler, Sucrose, Kaeya, and Jean. Two of the four are accessible to everyone (Geo MC and Kaeya), and Sucrose isn’t too hard to grab (assuming you don’t already have her in your roster). Jean is the hardest to grab, since she’s a 5-star, so if you don’t have her try and substitute her with a character in your roster that can knock enemies back.

The idea with this comp is simple: Geo MC can use their Elemental Skill to block the routes enemies are taking, Kaeya’s short skill cooldown will allow you to frequently freeze enemies afflicted with Wet from your Hydro towers, Sucrose has an AoE knockback that triggers Swirl, and Jean can push and grab enemies as required (throwing enemies off open ledges is a perfectly viable tactic).

Some other solid characters to consider are Barbara, Zhongli, Fischl, and Ganyu. Barbara is essentially Kaeya’s polar (heh) opposite; she can soak enemies and make it easier to freeze them in place. Zhongli pairs nicely with the Geo MC to create walls enemies simply can’t bypass. Fischl’s raven Oz continue to act as a potent Electro-triggering turret, and Electro supercharges send enemies flying in Theater Mechanicus. As for Ganyu, well, congrats – you’ve won the game. Stack Hydro towers, then laugh, and laugh, and laugh . . . .

Regardless of the comp you end up using, remember to work in tandem with your towers, and don’t be afraid to alter what towers you have on the field to better match the enemies that you’re about to face. Don’t be afraid to use a Recovery tower or two: the extra Veneficus Points can be the difference between success and defeat. Best of luck Traveler, and happy Lantern Rite!