Pop as many balloons as you can before time runs out, yet beware the Heartbreak Balloons! 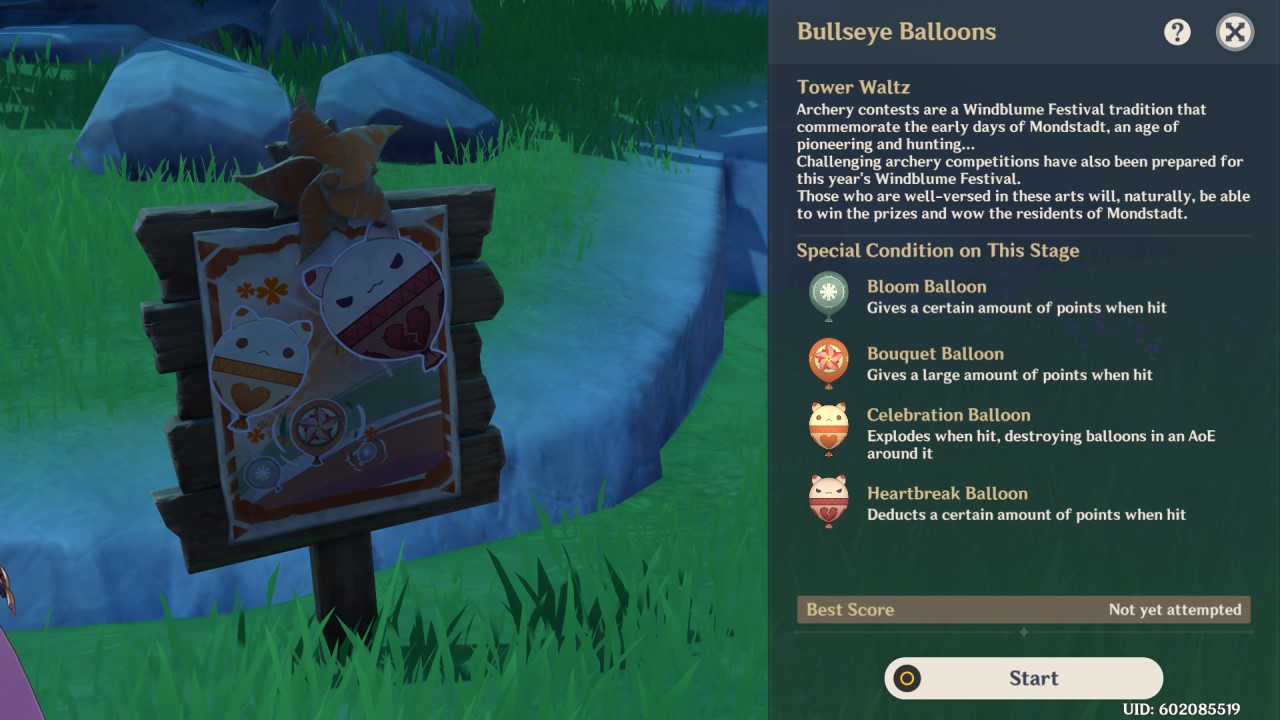 The Bullseye Balloons challenge in the Genshin Impact event “Invitation of Windblume” is a great way to earn Festive Tour Tickets for the event shop, but you’ll need to understand the rules if you want to beat all three scores per challenge. Now that you’ve unlocked the activity it’s time to sling some arrows and pop some balloons.

How to Clear Bullseye Balloons in Genshin Impact

The idea behind Bullseye Balloons is simple: shoot certain balloons for points, while avoiding others. There’s obviously more nuance to the Windblume Festival challenge than that, so let’s dig into it a bit.

After unlocking the activity you’ll discover four different challenges within Bullseye Balloons, three of which are time-gated. All four have three scores apiece that you’ll need to clear to earn all the available rewards and Festive Tickets on offer. Selecting the challenge will bring up not only your highest score, but the three scores you need to beat. Selecting the chests next to the characters’ portraits will reveal the rewards associated with their scores. 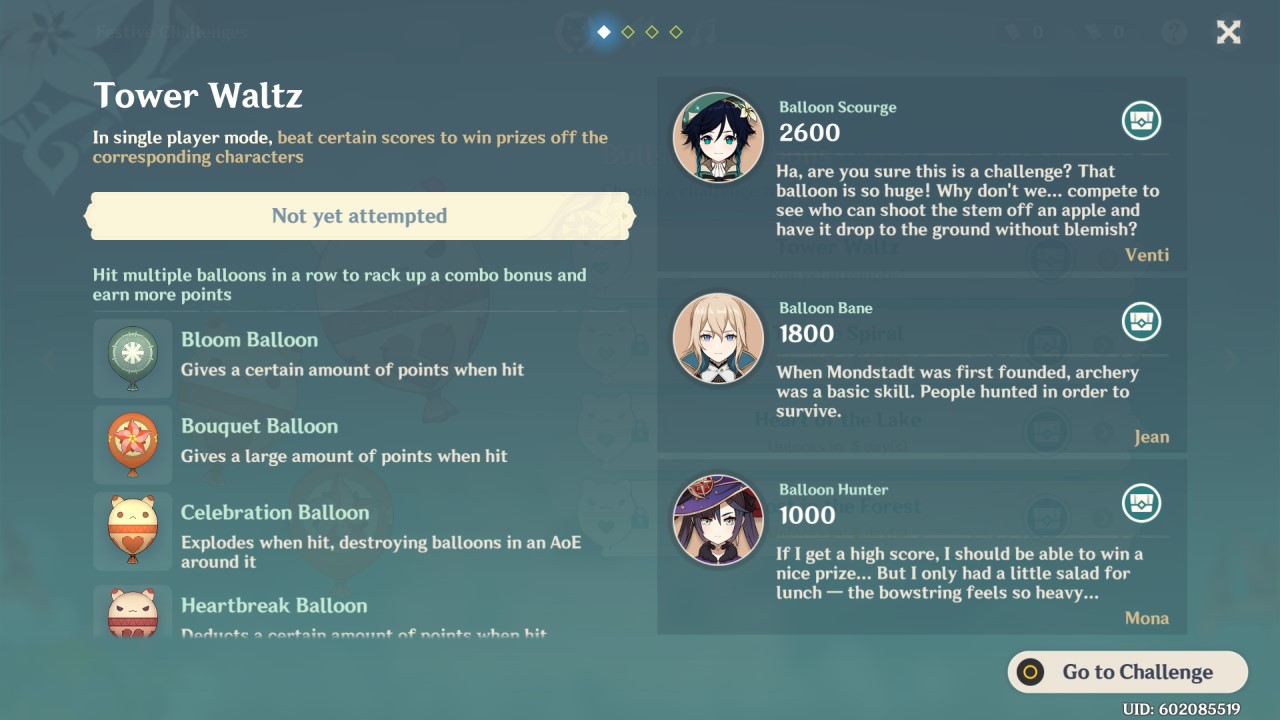 To take on the Bullseye Balloons challenge click “Go to Challenge” in the bottom-right of this screen to jump to the event marker on the world map. Teleport to the nearest waypoint, then run up and interact with the event board to start the challenge.

From here you’ll load into the challenge, and will have a set amount of time to shoot as many balloons as possible. There are a few things to keep in mind: 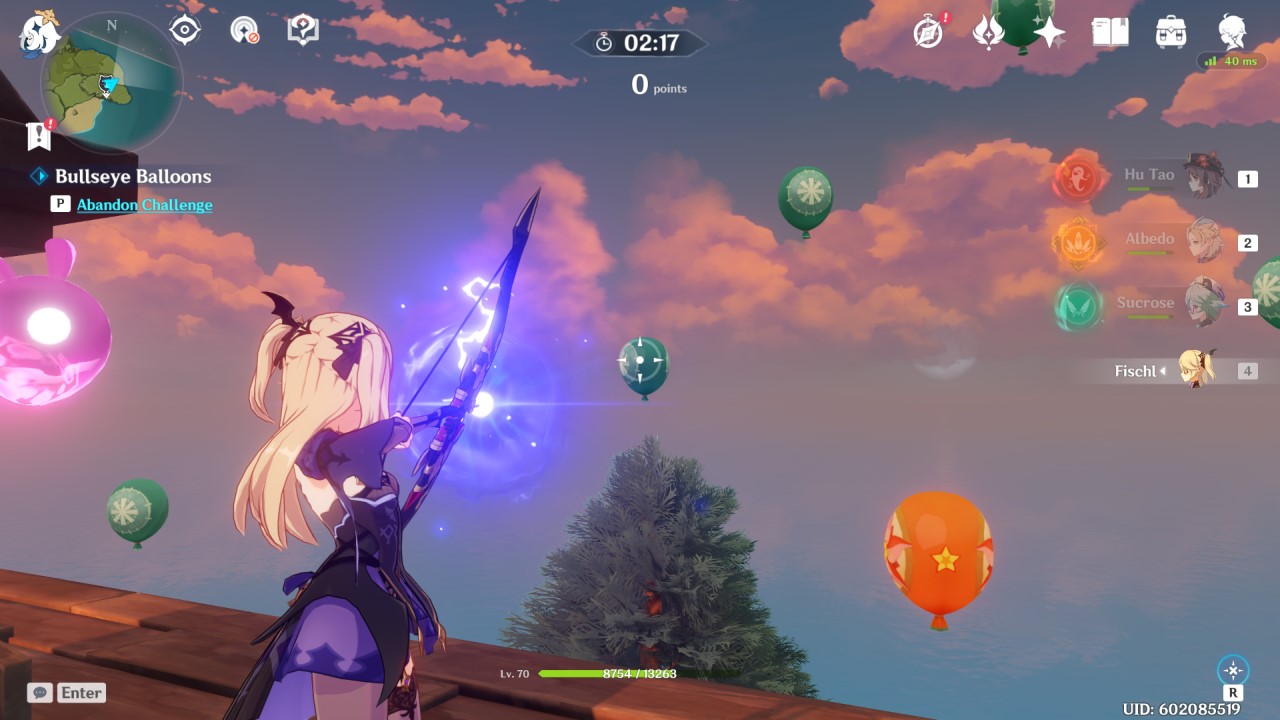 The trick is to build up your combo with the easier to hit Bloom Balloons, and then pop the Bouquet Balloons once you’ve reached a combo of 5 or higher. Aside from that, keep an eye out for balloons that are lumped together: there is usually a Celebration Balloon nearby. Be mindful of Heartbreak Balloons, however, since they tend to trail Bouquet Balloons or float within range of Celebration Balloons.

That’s really there all there is to it. It took me a single try to clear all three score thresholds in the Tower Waltz challenge of Bullseye Balloons, though I am certain the next three challenges will prove tougher to overcome.