Get dunked on! Learn how to slam dunk in the game easily! If you’re looking to get up close and personal with the rim in NBA 2K23, you’re going to want to know how to properly dunk. While we have covered Contact Dunks, let’s get into theooffeat and potatoes of things, and find out how you’ll be able to pull of all of the different dunks that are available in the game.

If you’re having a hard time, or find yourself continuously throwing floaters when you get to the rim, you’re not alone. With one of the most complex control schemes, a proper dunk can sometimes feel impossible to pull off, if you don’t know what you’re supposed to be doing. Let’s get into the details of how you’ll be able to pull off all of the dunks available in NBA 2K23!

All Dunks Explained In NBA 2K23

If you’re ready to get to the court in NBA 2K23 and want to show off your skills, one of the best possible ways that you’re going to be able to do just that is by pulling off an excellent dunk on your opponent. No matter which team you are playing as you’re bound to find at least one player that can pull off one hell of a dunk, but you may not know which kinds are all available. Here is every dunk type in NBA 2K23.

As you can see, especially if you are a newer player, there are plenty of things that you’ll need to learn before you jump into a Dunk Contest in the game. Let’s dive in and see what you’re going to need to do to make sure that you’re ready to bring the slam to your opponents!

How To Do Participate In Dunk Contest In 2K23

If you’re wanting to make sure that you’re ready to show off your skills in the Dunk Contest, these are the moves that you’ll be able to pull off to take home the gold:

If you’re ready to get on the court, then you’ll need to make sure that you’ve got the controls down well. Depending on the system, you’re going to have a different button prompt for plenty of moves, so let’s discuss that first.

To make sure that you’re able to perform a Contact Dunk, these are the requirements needed:

If you’re looking to pull off one of the most classic dunks in the game, you’ll just need to make sure that you’re running towards the hoop, and holding UP on the Right Stick to make this happen. Your character will jump up, and slam the ball down, and you’ll be able to approach from any angle to make this happen.

If you’re in the clear, you’ll be able to make this happen much easier, because if you’re surrounded by other players, there’s a good chance that you’re just going to float the ball into the hoop if it’s not clear enough. However, after you’ve learned how to make this happen, you’ll never have to worry about floating a ball ever again. 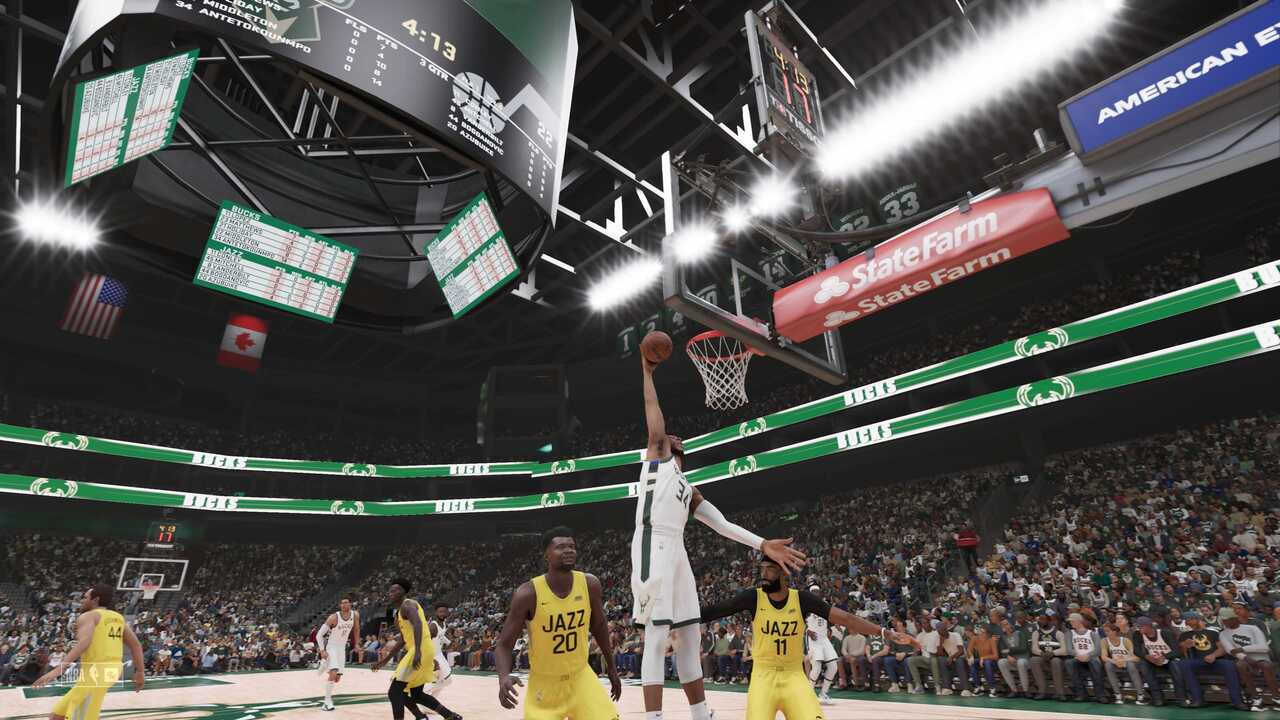 If you’re looking to spice things up a bit, and slam down on your opponents with just one hand, here’s how you can do it. Depending on what hand your player is dominant in, you’ll be able to select the type of dunk that you’d like to do. If you want to play things safe, you’ll be able to bring it down with their strong hand, or if you want to show off, you can use their non-dominant hand to show off a bit.

As you run towards the hoop, you’ll want to quickly move the Right Stick in whichever direction that you want to dunk. So, if your character is right-handed, and you want to use their dominant hand, approach the hoop, press the run button, and flick the Right Stick to the right to make this happen.

If you want to show off your skills, and show your opponents that they shouldn’t mess around with you, the Flashy Dunk is going to be your best friend. This is going to be one of the most tricky moves to pull off, but if you can make it happen, you’re bound to show up in the Highlight Reel.

As you approach the hoop, make sure that you’ve pressed and held the run button, and as you get close enough, you’ll either need to move the Right Stick up, then down quickly for a Two Handed Flashy Dunk, or flick it up twice for a One Handed Flashy Dunk. If you’re not quick enough, you may end up with a standard dunk, so make sure that you’re practicing before you try this out on a skilled foe.

The least flashy of all of the dunks, you’ll be able to pull this off with ease, if you’ve managed to master these other types of dunks. This one can be completed by players that are a bit intimidated by the Shot Stick, as you’ll also be able to use face buttons to make this dunk happen.

What you’ll need to do for a Standing Dunk is be near the net with no defenders surrounding you, and just hold the run button, and either hold down the shoot button, or move the Right Stick up, and you’ll be able to nail this dunk.

If your player is an Elite Dunker, you’ll be able to bring this type of slam down on your opponents, making sure that the only thing getting in your way is the net. As you approach the hoop, make sure that you’re holding down the Run button, and getting ready to flick the right stick in any direction of your choice. And the best part about this dunk, is you don’t need to worry if people are guarding the hoop.

If a player misses a shot, being under the hoop, hold down the shoot button as soon as the ball comes off of the glass, and you’ll be ready to grab and slam the ball back down into the paint. Now that you’ve mastered this, you’ll be ready to jump in and earn those 2 points that could have gone MIA.

Making sure that you’re practicing these dunks is going to help you become the best baller that you can be. Especially with the ability to change your difficulty, you’ll want to know everything that you possibly can about the game to make sure that you’re ready to jump in without having to worry about getting yourself knocked out of the running.

And there we go! Everything that you’ll be able to do for all things involving Dunks in NBA 2K23! If you’re ready to jump onto the court, make sure that you’re ready to get into the game and start slamming into our Guide Section, where you can learn how to upgrade your character’s equipment, the best ways to farm VC in MyCareer, and how to change your city affiliation for MyPlayer!