Hunt Down Some Agents With This New Skin Bundle. 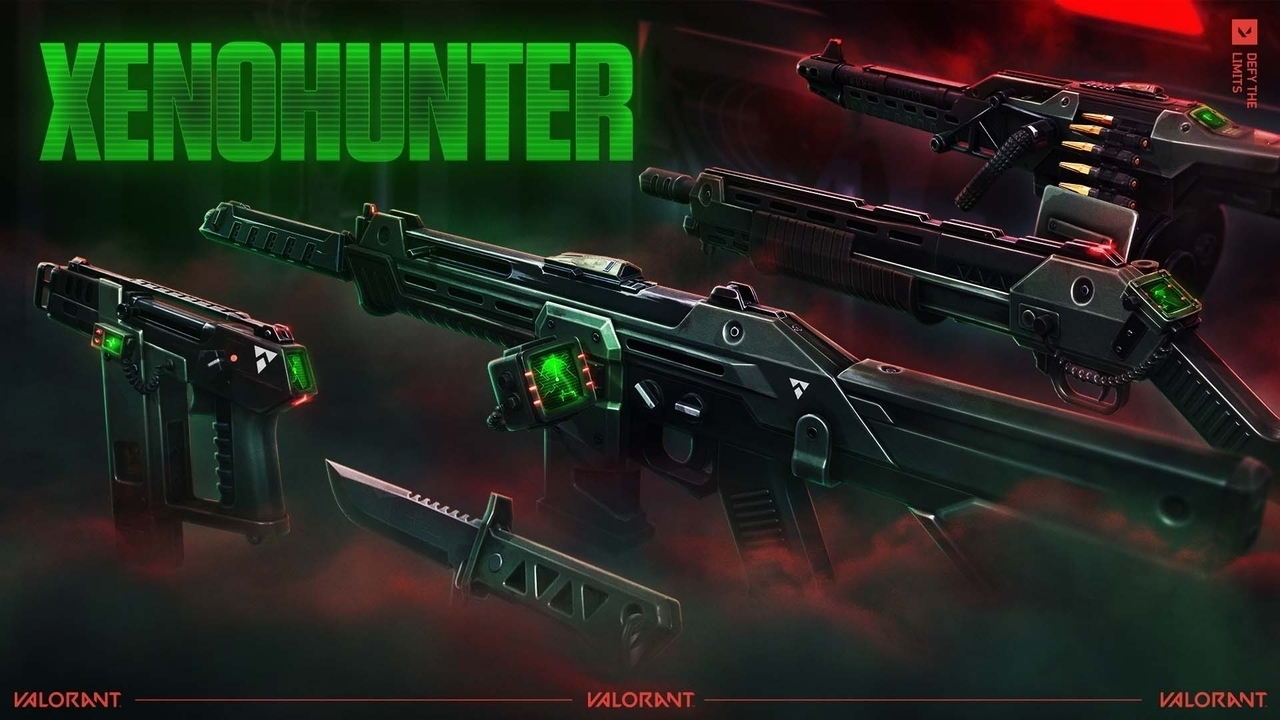 Every new patch or so, Valorant players will see a new skin bundle in the shops for their perusal and purchase, and the new one is Xenohunter. The skin bundle was announced recently on the social media accounts for Valorant and is set to feature a batch of skins that seemingly invoke the aesthetics of their namesake, right down to the futuristic heart sensor. This guide will discuss the potential pricing for the skin bundle, when it is being released and what details could set this bundle of skins apart from the previous releases of Valorant skins.

All There Is to Know About the Xenohunter Bundle

Going by the official tweet, the bundle is set to release tomorrow in the Store, replacing the Neptune bundle that is currently in rotation. The Valorant Xenohunter bundle includes skins for the weapons Frenzy, Phantom, Bucky, Odin, and the melee weapon. Judging by the traditions of past bundles, there will also likely be complimentary gun buddies thrown in to sweeten the purchase.

No official pricing has been announced regarding the skin bundle, but judging by data mined in-game assets and past conventions for skin tiers. The skin bundle would likely fall under the Premium Tier, sold for 7100 Valorant Points. This conclusion can be arrived at due to the lack of visual, auditory changes, or complementary assets associated with this skin bundle, aside from the heartbeat sensor which will likely serve as the only skin upgrade. Making this a skin line with additional features that lacks the comprehensive list of frills included in skin bundles like the RGX 2.0.

The clips shown from official sources would seemingly support this, where the gameplay footage with the skins in usage showed little changes in firing effects and reloading animations compared to default settings. Some might argue those modifications to be of a lesser extent compared to skin lines of the same tier, such as the currently sold Neptune bundle released in patch 4.10.

This leaves the question of the heartbeat sensor. At a glance, the attachment gives players the ability to view the minimap from looking at their gun compared to the corners of their game screen. From the shown gameplay footage, it doesn’t seem to display enemies in nearby proximity. It instead reacts to environmental hazards, with the screen flickering when the player character is going through areas with dense smoke.

With all of these factors combined, it’s hard to suggest that the skin line would attract players drawn to the concept of skins giving weapons complete overhauls in silhouettes and special effects. Nor does it seem to provide a competitive advantage that would convince players of the effects of the attached heartbeat sensor. Perhaps players will find an easily accessible mini-map from their gun a boon in spur-of-the-moment gunfights, but it is ultimately up to players to determine if that’s the case. Just be aware that bundles aren’t refundable according to Valorant policies.