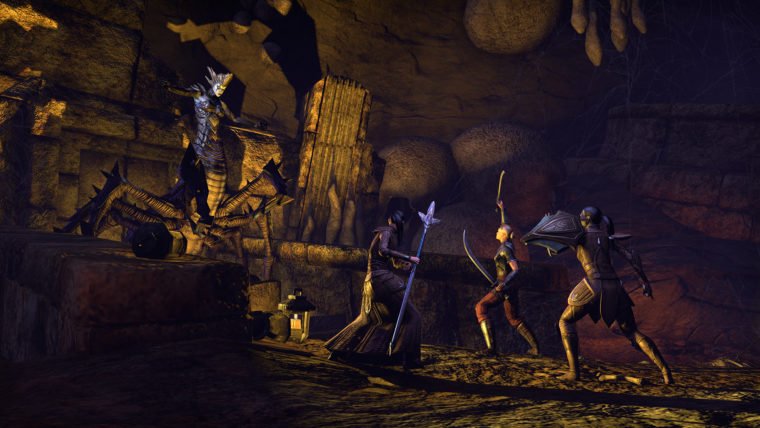 UPDATE: The game is now available here. The Standard Edition is currently $29.99, while the Imperial Edition costs $47.99. A Bethesda.net account is required to play the game.

The Elder Scrolls Online will be available on Steam later today. The game is a massively multiplayer RPG set in the fantasy world of The Elder Scrolls series of single-player RPGs. Before now, the only way to play the game was to purchase it on its own with no way to add it to your Steam library. UPDATE: Zenimax has announced that current Elder Scrolls Online players will not be able to receive a Steam version without repurchase, but they can add the game to Steam as a Non-Steam Game.

Both the Standard and Imperial Editions of The Elder Scrolls Online will be made available for purchase, with pricing expected to remain the same as the retail release. More details will be announced at a panel at Quakecon tomorrow.

The story of The Elder Scrolls Online takes place before any other Elder Scrolls title in the series. Players can choose their race and class as they create a character. After that they are able to set out into a vast, open world to explore. The gameplay follows many classic Elder Scrolls tropes, such as two handed combat in either first or third person.

Currently The Elder Scrolls Online is only available for PC and Mac, but Playstation 4 and Xbox One versions are planned. They were delayed by around six months a while ago, causing many to question Zenimax’s commitment to the console release plans. They have assured gamers that they continue to work on both versions and expect them to release later this year.

The Elder Scrolls Online is developed by Zenimax Online Studios and published by Bethesda Softworks . It was originally released on April 4th with mostly positive reactions from critics. We tested out the beta of the game and provided impressions here and here. Since release the game has had a number of patches and updates that have enhanced the gameplay and world. A recent update added an Adventure Zone featuring a new storyline and increased difficulty.