The latest news in the world of video games at Attack of the Fanboy
June 13th, 2016 by Kyle Hanson 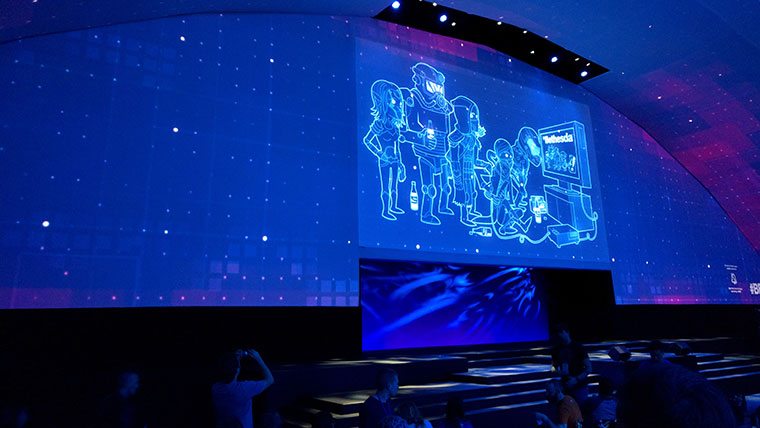 It’s E3 2016 time, and we’re here in Los Angeles with AOTF Podcast #34, giving you all the news that the week has to offer. This is sort of the first day of E3, but really this is just the precursor to the insanity that starts on Tuesday. So, we’re calling this E3 2016 Day -1. EA and Bethesda have shown off all that they have for the coming year, and we came away with some mixed impressions.

EA started the day off with a press conference that may have been a little light on press. People from all over LA flooded into The Novo to see what the developer/publisher had to show off. If you’ve seen previous year’s EA E3 press conferences then you probably were not that surprised with what you saw.

Sports were a big part of the conference, with EA dedicating tons of time to this year’s installments of Madden and FIFA. While these bring in the big bucks, they don’t really wow the crowds like some other games.

The real showstoppers were Battlefield 1, Titanfall 2, and Mass Effect Andromeda. Or, at least they should have been, but we saw very little that was all that surprising from these games. Titanfall 2 showed some cool new stuff, but a lot of that had been leaked previously, and BF1 was more of the same awesome stuff we’d seen before.

Mass Effect Andromeda on the other hand was disappointing in that this was another year where we got a peak behind the scenes, rather than a real look at the game itself. The game has been in development and fully announced for about three years now, so why we still have no idea what the story is, or how the game will play is pretty baffling.

Bethesda took the stage later in the evening and delivered another fantastic show. This one was obviously not as intense as last year, with the Fallout 4 bombshell rocking the gaming world. Still, Bethesda showed some really great things, and even had a few surprises ready for their fans.

Quake Champions, more Fallout 4 DLC, and a new Prey were pretty big shocks. Bethesda VR was the really big announcement, with the company going all in with the HTC Vive, launching Fallout 4 and DOOM on VR, with the former coming in 2017. We got to go hands on with these games at the after-party and were pretty impressed with what we saw.

This is just the beginning of our E3 2016 coverage, so check back tomorrow for Microsoft, Sony, and a few others.