The Return of the Wandering Anemo Ronin. Kazuha is making his long-awaited return to Genshin Impact in the recent rerun banners announced for patch 2.8. The soon-to-start patch will likely prove to be a redux of the summer adventures of patch 1.6, featuring the Golden Apple Archipelago alongside a new roster of characters set to make event appearances. Among them is Kazuha, an Anemo sword user who has long been sought after by players who missed his character banner a year ago. Accompanying his banner rerun is a personal story quest with unique rewards and the 4-star catalyst user Heizou.

The Genshin Impact Kazuha Rerun Banner will start immediately after the maintenance for patch 2.8 concludes on the 13th of July and will continue until the 2nd of August. Two rerun banners will be running concurrently during that time frame, one for Kazuha and the other for Klee. The 4-star characters are the same between the two banners, those 4-star being Heizou, Thoma, and Ningguang.

It’s hard to say that the three characters would prove synergistic if placed in the same team as Kazuha, but there are reasons to consider them depending on what the player pulling on this banner is looking for in terms of by-products. Heizou is an intriguing concept in the sense that he is the first character released based on the premise of being an up-close brawler and will likely attract a great deal of attention due to bringing a new style of gameplay to the table. 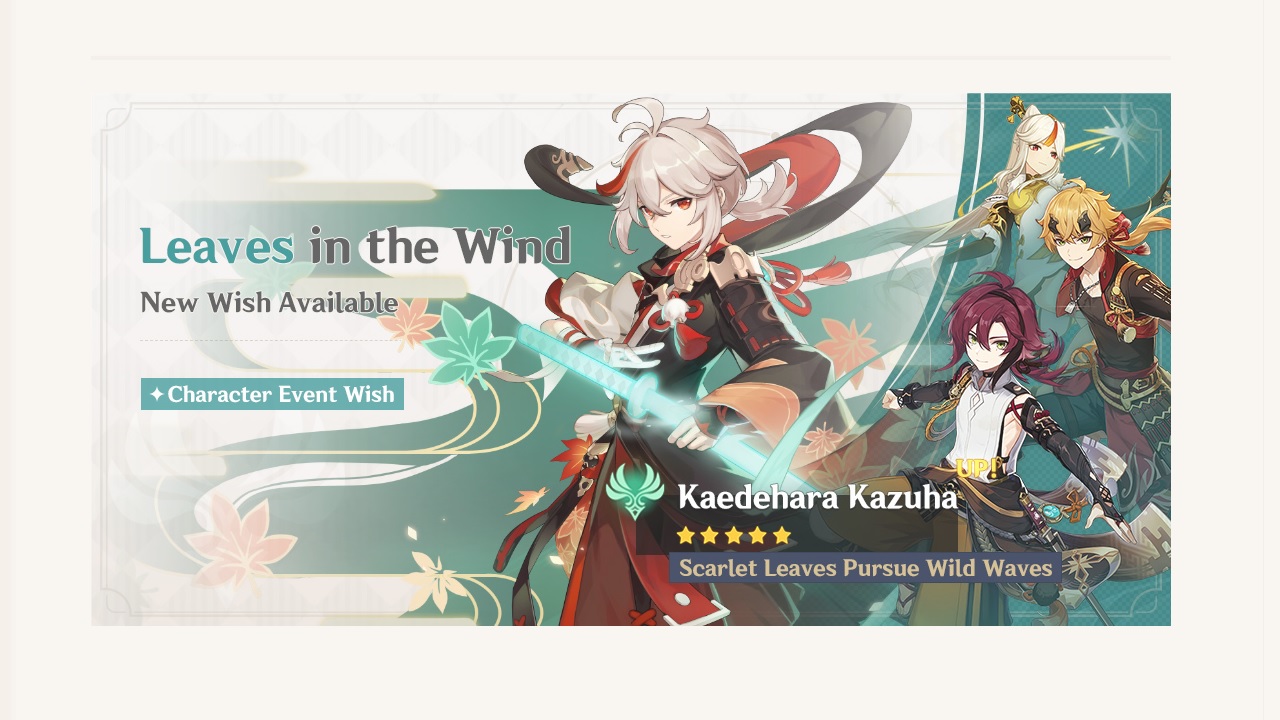 Thoma and Ningguang on the other hand are characters with tenure that serve their intended purpose, Ningguang is a Geo catalyst damage dealer, and Thoma is a Pyro Polearm that shields his teammates and refreshes them based on the pace of his attacks. Getting constellations for them should prove beneficial if players are already using them on their teams, though they might not be considered premium due to element restrictions or other characters that might serve their purpose better.

Aside from Kazuha’s rerun banner, there will also be a coinciding weapon banner that features both the best-in-slot limited sword for Kazuha, the Freedom Sworn, and the standard banner catalyst, Lost Prayers to the Sacred Winds.

Though team compositions might change as a result of Sumeru and its gallery of Dendro characters, it is difficult to suggest that the crowd control and utility provided by Kazuha to be a value that will become obsolete with patch 3.0 releases. It’s fair to assume that players will have a hard time managing their Primogems, as characters belonging to a new element will inevitably prove desirable. This is not helped by the fact that Kazuha is a character worthy of such budgeting considerations.