The axe-wielding Berserker is one of the toughest Jobs in Bravely Default 2. With their axes and animalistic appearances, Berserkers in Bravely Default 2 are a force to be reckoned with. Unlocked by the end of the fist Chapter, you won’t be waiting for a long of time before you get your hands on this combat-loving Job. In this Berserker guide, we’ll be seeing into their aggressive kit and some very handy passive abilities.

If you like axes and bursting down enemy waves in seconds, the Berserker is the Job for you. It won’t take long to realize that Berserkers are an extremely strong, physical damage-type Job, that mainly focuses on heavy hitting AOE attacks. 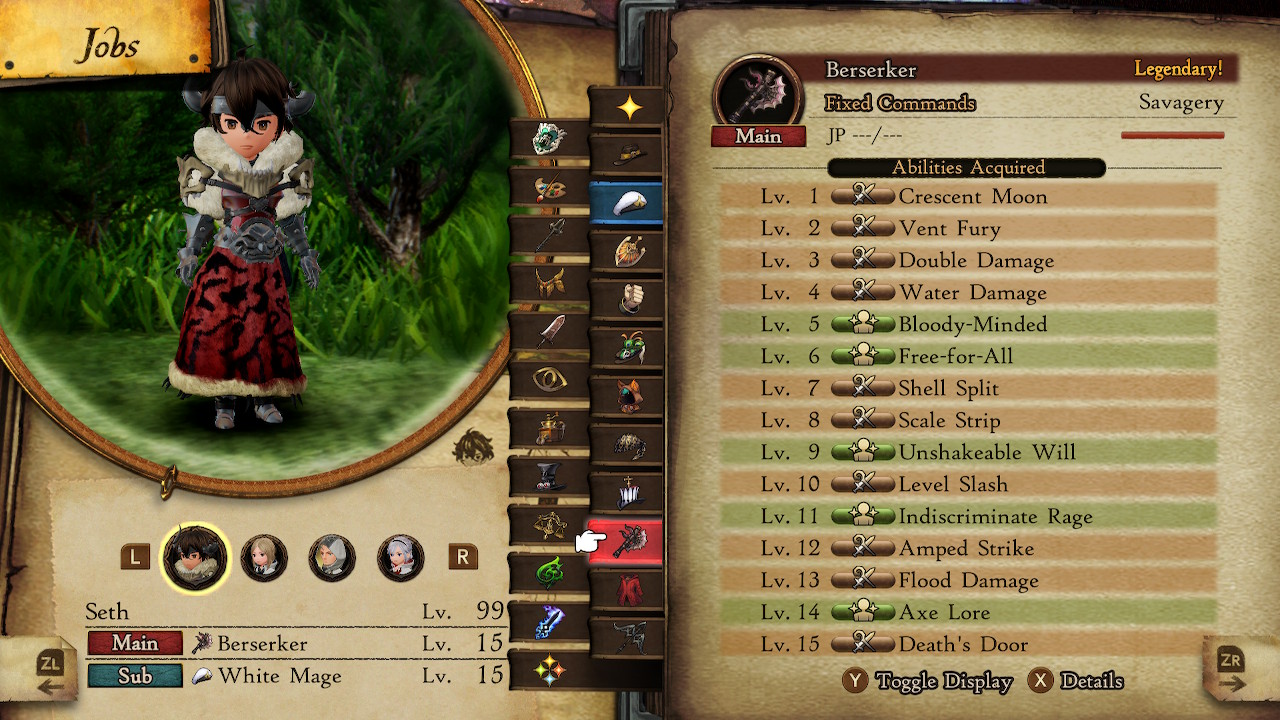 You can’t go wrong by choosing a Berserker to be included in your party. Besides their very low speed, they don’t really have any other drawback as far as combat goes. Very high physical attack, good defenses, extremely helpful passives and hard hitting attacks, both single-target and AOE.

A Berserker’s trademark is their ability to abuse the berserk status at will, which renders a character’s abilities useless and lets them use only the ‘Attack’ Command. In return, it increases their physical attack by 50% and lowers their defenses as well. Through further leveling up, they unlock more options to take advantage of this ailment, alongside passives who do the exact opposite, like turning the character immune to such status effects.

Which brings us to one of the most important passive abilities for pretty much the whole game. Unshakeable Will is a passive ability that all of your characters should have, as it makes your characters immune to movement impairing ailments. This renders many Boss strategies useless and gives you the option to keep attacking everyone without disturbance at all. Which is something further supported by their Speciality I, Pierce Default. Enemy’s Default command is rendered useless, so no one can defend against a Berserker.

These barbarians hit hard. Like, very hard. Specifically, their Amped Strike is tied for most damaging ability up until post game, with the infamous Godspeed Strike. Additionally, the Level Slash skill is surprisingly VERY strong, even if it’s an AOE attack. To be honest, I was using this damaging ability for the whole game, as I constantly had at least one Berserker sub-job with me, for this technique alone. Not only it’s perfect for farming, but also sets up a very damaging combo, when you manage to unlock the Berserker’s level 15 potential. Death’s Door, their last unlocked ability, is an AOE attack that deals more damage the less HP you have. Level Slash, uses HP instead of MP to be activated. Therefore, the tactic should be using three consecutive Level Slashes, followed by a Deaths’ Door, all with 4 BP used. The result would amaze you, as the damage inflicted is insane. If you pair this with Bard’s Epic Group-Cast, you are going to see some huge numbers.

Berserkers are overall a great Job, with all the tools needed to be an offensive threat to every creature and Boss. Don’t hesitate to have multiple Berserkers in your team, as they simply make things easier, especially farming or grinding. If you want to pair Berserker with another Job, which you should, Vanguards, Swordmasters and Thieves are excellent as a main Job, with the Berserker as a sub-job. Vanguard for their stats, Swordmasters for adding a layer of handy skills and their two very good Specialities, and a Thief to be able to take advantage of their great speed stat. With the correct abilities and gear equipped, the damage output of every combo should be equally high enough to carry you through the whole game.

Ending our Berserker guide with a small mention to the following Job we are going to take a look at, the Red Mage. Masters of both support and offensive type of spells, these fabulous mages are a perfect pair for any spellcasting Job in the game.