Whips are surprisingly strong, long-ranged melee weapons. Check out where to find them! There are so many classes of weapons to choose from in Elden Ring, ranging from greatswords, shields, staves, katanas, and so forth. There are even whips that you can equip, allowing you to assume the role of other famous whip-wielding characters from movies and games like Simon Belmont from the Castlevania franchise or Indiana Jones. Here are the locations of each whip in Elden Ring.

There are six known whips to be found in the game. They’ll be listed in an order of which you can obtain first.

The first whip that you may come across in the game is located in the southern-most region of the game. Starting from Limgrave, make your way down past the Bridge of Sacrifice until you get to Castle Morne. Progress through this area until you get to the Rampart Gaol location. There should be a corpse inside the building that you can loot which will give you this standard Whip.

This whip can be found at Caria Manor. The closest Site of Grace to obtain this is the Manor Upper Level. There will be a body that you can loot which will have this item.

This fire elemental whip is obtained in the Volcano Manor. It’s also a missable item if you decided to kill Patches early on in the game. If you kept him alive, he’ll have a quest for you to kill Great Horned Tragoth for him. Once you do, he’ll reward you with this unique weapon. 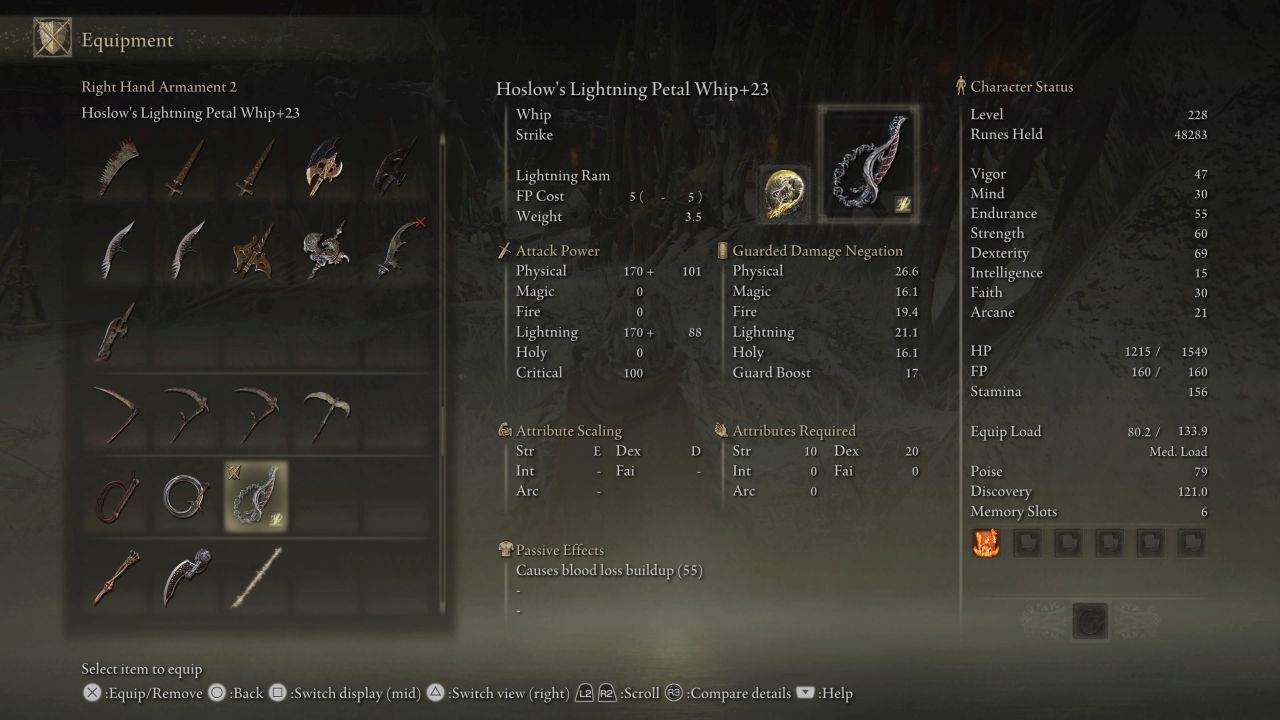 This whip is also obtained at the Volcano Manor. When you go on with Tanith’s requests to kill other Tarnished, you’ll come across an enemy named Juno Hoslow. Defeating him will give you this weapon, along with his armor set.

This weapon can be obtained by killing Fire Prelates. You can encounter these enemies near the Guardians’ Garrison by the Whiteridge Road Site of Grace. Drop rates can be a bit low, so you should rest at the nearby Site of Grace to respawn enemies. You can also use item drop enhancing tools like the Silver-Pickled Fowl Foot and the Silver Scarab.

This weapon is obtained after defeating the Fire Giant in the Mountaintops of the Giants. When he grants you the Remembrance of the Fire Giant, bring it to Enia at the Roundtable Hold and trade it for the whip. Out of these whips, the best ones are Hoslow’s Petal Whip and the Thorned Whip. these two weapons deal Strike damage, which is highly effective against hard-bodied enemies like Crystalians. They also have innate Blood Loss buildup which can drastically reduce enemies’ health with a few consecutive hits. Pair that with the fact that you can equip an Ash of War on them to either boost the efficiency of Blood Loss buildup or add a secondary status effect like Poison or Frost.